In the Weeds: How Marijuana Policy is Shaping the Election | Bitch Media

In the Weeds: How Marijuana Policy is Shaping the Election 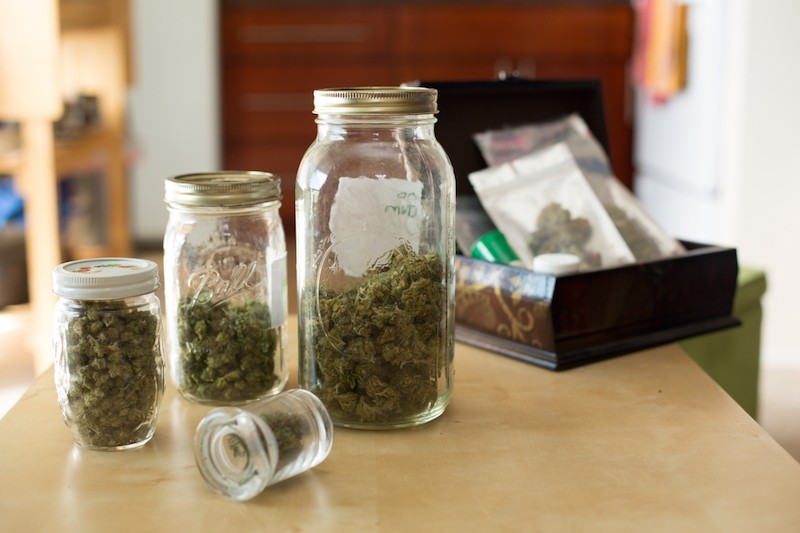 What do Malia Obama, a Rogue River port-a-potty, the California Secretary of State, and the Drug Enforcement Administration all have in common?

If you guessed “the Mary Jane,” have a spliff and settle in for some reefer madness. While the big dogs have been barking on the campaign trail, this week has featured a veritable cornucopia of irresistible doobie-related news. Marijuana is playing an outsized role in politics right now, starting with our very own first daughter.

Like any reasonable 18-year-old who has been trapped under virtual house arrest in the White House for eight years, Malia Obama set sail for Lollapalooza in Chicago, leaving her poor sister slinging takeout at a fish shack on Martha’s Vineyard. Upon arrival, Malia Obama did what any reasonable person would do at a music festival—she danced, she had fun with her friends, and she may or may not have smoked something that may or may not have been marijuana.

There’s video, of course, and the internet has been frantically dissecting it, divided on whether or not she is consuming the demon weed. Surprisingly, social media seems by and large pretty indifferent to, if not supportive of, the alleged joint—perhaps because people can recognize the hypocrisy of rooting for an Olympian known to smoke pot while dragging a poor teenager for appearing to be partaking. (Though, like President Bill Clinton, it’s possible she smoked but didn’t inhale. Or maybe, like her father, she doesn’t see it as any worse than alcohol.) 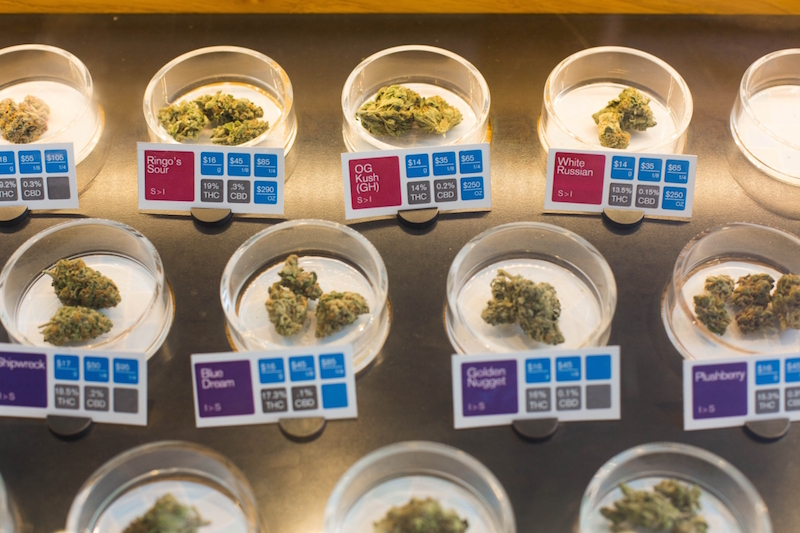 Some of the freaking out seems to be about the fact that we’re not freaking out. As a young Black woman, she’s hard up against the demands of respectability politics, which are compounded by her role as a member of the first family. This is a country where people of color make up 67 percent of the prison population, which in no small part due to regressive drug policies that specifically targeting young Black men for holding marijuana. That’s one reason why the city of Oakland, California, just instituted an equity process with dispensary permits, seeking parity in a white-dominated industry. In a way, if Malia Obama did choose to indulge, it would be a remarkable act of defiance not of popular culture, but of the twisted history of drugs and race in America.

While the elder Obama daughter was or wasn’t doing something with something that was or wasn’t marijuana, the DEA was getting busy with its long-awaited announcement on marijuana rescheduling. Perplexingly, marijuana has historically been a Schedule I drug, viewed as something with no medical use and high potential for abuse—to put this in perspective, prescription opioids, associated with over 18,000 annual deaths in America, are technically considered less dangerous than marijuana, apparently, as a Schedule II, or in some cases, a Schedule III, drug.

Read This Next: #ImWIthHer But I Don’t Have to Love Her
Listen to This Next: Popaganda: Race, Gender, and Marijuana

Medical marijuana advocates have long fought this classification, arguing that cannabinoids have a medical purpose and low potential for addiction. Recreational users argue that it doesn’t possess the vaunted capacities for abuse, serious health risks, or social dangers that the DEA seems to think it does. Both groups are frustrated by the fact that it’s extremely difficult to conduct any marijuana research because of its DEA classification: Researchers have to get their weed through federally sanctioned sources, and it’s a pain in the patootie.

Many were hoping that the DEA’s announcement on Thursday would radically reshape the marijuana policy landscape, which it didn’t exactly do. It’s still entrenched at Schedule I (that sound you just heard wasn’t a sad trombone, but the sound of a million bongs bubbling sadly into silence). However, they are relaxing the restrictions on sourcing pot for research, which means that scientists are no longer dependent on a single, tightly controlled government lab.

More research means more data, which could be valuable, but it’s definitely not the victory many marijuana policy advocates were hoping for.

It’s also hopelessly regressive, because even as the DEA insists that marijuana is more dangerous than cocaine, thus lending credence to racialized criminalization laws and a very costly war on drugs, the states have other things on their agendas.

Nine states, specifically. Arizona, California, Maine, Massachusetts, and Nevada have measures for full legalization on their ballots this November, which would allow these states to join Colorado, Oregon, Washington, and the District of Columbia. Arkansas, Florida, Montana, and North Dakota, meanwhile, are more tentative, with medical marijuana ballot measures in play. While not equating to full legalization, they are, if you’ll forgive me, a gateway drug for across-the-board legalization for recreational purposes.

This is an unprecedented number of bids for the bud. While these laws come in a variety of different flavors, they’re showing that we’ve come a long way since California’s Proposition 215 electrified the weed landscape. Should they pass, they’re going to amplify the pressure in a bitter fight of states rights versus the government.

That could have real implications for the next president of the United States. We might not be adding hemp to the White House garden just yet, and it seems unlikely that California’s finest edibles will be passed around after the inauguration dinner, but the president is going to have to take a stance on marijuana policy. Vague platitudes aren’t going to cut it anymore.

Secretary Hillary Clinton has taken the issue to heart—on Thursday, she reiterated that she intends to reschedule marijuana because of what her spokeswoman described as valid medical uses and the need for more research. Clinton has expressed an interest in allowing states to sort it out while explicitly recognizing potential medical applications and noting the intersectionality of drug policy, race, and inequality in the United States.

Donald Trump, as everywhere else, is a wild card when it comes to marijuana. Depending on the time of day, the color of his underwear, and other mysterious factors too complex to fathom for ordinary Americans, he’s variably said that he supports medical marijuana, doesn’t support it, favors tighter regulation, favors less regulation, or thinks the states should handle it.

Meanwhile, in California, Proposition 64 is at last putting the question to the people, and some of the people are pretty upset. More specifically, No on 64 just sued the Secretary of State, arguing that Yes on 64’s ballot arguments are false and misleading. In fairness, Yes on 64 actually started it, suing Senator Dianne Feinstein and other authors of No on 64’s ballot arguments.

This is admittedly a somewhat novel approach to rebutting ballot arguments, but No on 64 is likely to lose in both cases, as their claims are pretty tough to prove. In fact, in some cases they’re easily disproved—as, for example, where its ballot argument claims that legalization will endanger children, when in fact that law specifically includes multiple provisions intended to keep marijuana out of the hands of impressionable youth.

The battle over Proposition 64 is in some ways a microcosm of the culture wars over marijuana across the United States as a whole. It has a formidable list of backers and supporters including politicians, law enforcement, doctors, farmers, and social justice organizations. Oh, and Gavin Newsom, who somehow started killing it on Twitter when I wasn’t looking. (A++ would recommend following California’s lieutenant governor. When he’s not snarking about Donald Trump or making pithy comments about sexism on television, he’s condemning capitalism and talking about his former job as a janitor.)

Opponents, meanwhile, tend to come from the old guard of politics and the regressive ranks of the “law and order” crowd. They’re struggling against something they don’t seem to fully understand—the stigma of marijuana is fading like so much smoke in the breeze, and marijuana has become so normalized that prohibition has become strikingly awkward. This is like 1932, and a growing segment of society has given up on even pretending to hide their illicit activities, sensing that the end is near.

Oh, and about that port-a-potty: Let’s just say that sometimes you find more than you expected when you pop in to use the loo.

Read This Next: #ImWIthHer But I Don’t Have to Love Her
Listen to This Next: Popaganda: Race, Gender, and Marijuana

Relevant: This is Not Normal 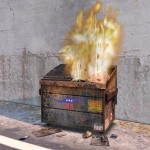 by s.e. smith
In order to have a fighting chance in the coming years together, we need to know what we are fighting—now more than ever, we need a bold, aggressive media that holds the administration accountable.