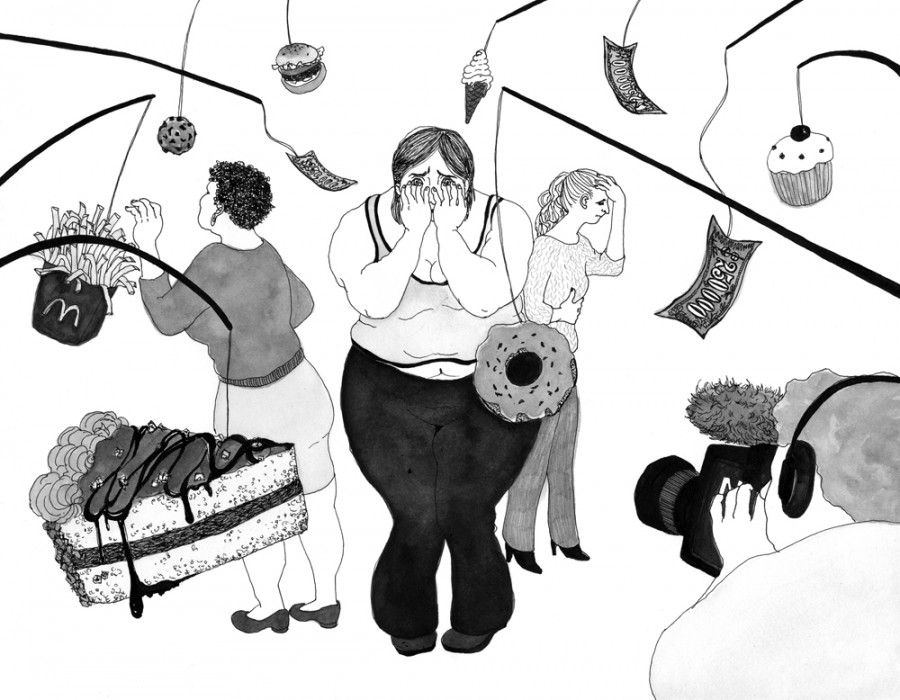 "Obesity," declares Charlotte Cooper, author of 1998's Fat and Proud: The Politics of Size, "is just a word used by people to medicalize fat." Extra weight, once considered a genetic short straw, is increasingly characterized as a crisis threatening the physical, political, and moral health of our nation—even as large bodies are becoming increasingly visible in popular culture.

Medical and public-health sources define obesity as weighing more than 20 percent over one's "ideal weight." However, the methods that are used to determine "normal" weight ranges are limited in their estimation of what constitutes obesity. And as the ranks of overweight and/or obese Ameri­cans swell, they challenge the very notion that fat is not "normal."

So what's making us so fat, and why? In the past, overweight Ameri­cans have had several tried-and-true explanations: genetics, an under­active thyroid, and that old favorite, big bones. But a quick review of studies and books on the plumping of the American populace shows that there is no consensus about the etiology of individual weight gain. Increasing rates of obesity have been attributed to a wide range of factors both personal (overwork, food obsession, yo-yo dieting, stress) and social (poverty, the rise of fast food, poor nutrition education). Now, a handful of scholars and psychologists are attempting a deeper evaluation of this hefty new body, while even the basest expression of popular culture—that is, reality tv—is revealing some intriguing things about Ameri­can corpulence.

Linda Papadopoulos—a British psychologist, author of the 2004 book Mirror Mirror: Dr. Linda's Body Image Revolution, and consultant on the U.S. tv show Celebrity Fit Club (more on that later)—says weight gain is "not as simple as 'people just eat.'" Psychologists like Papadopoulos and psycho­analyst/writer Shari Thurer (author of 2005's The End of Gender: A Psychological Autopsy) find that individual weight gain can be attributed to causes as benign as eating when bored or as extreme as responding to sexual abuse by piling on pounds to make oneself unattractive. They also tend to link pathological eating disorders—including anorexia and bulimia as well as compulsive eating—to deeper issues around relationships and control, often rooted in childhood development.

In his early writings, Freud avoided arbitrary separations between psyche (mind) and soma (body), and in this approach Aus­tralian neurologist/psychologist Elizabeth A. Wilson sees fertile ground for new theories about eating and weight. She decries the progression of psychoanalytical investigation toward purely ideational theories of eating (what does it mean?) and away from biological explanations (what happens in the gut?). In her 2004 book, Psychoso­matic: Feminism and the Neuro­logical Body, Wilson expands feminist theories of the body through the illustration of biology's dynamism. Intrigued by the positive effects of using antidepressants to treat bulimia, she points out that the majority of the body's serotonin is found not in the brain, but in the "complex neural networks that innervate the gut."

Whether fat is viewed as a medical problem or as an indication of a damaged psyche, the message that permeates pop culture is the same: Healthy people are not fat, and fat people are not healthy. This rhetoric ignores the fact that a thin person can be weaker or more prone to illness than his or her fat counterpart, and it coerces us into a constant vigilance against what could be an evolutionary preference for amassing energy reserves (fat) to sustain us in periods of famine. If it were so easy, natural, or normal for us to be our "ideal" weight, perhaps we wouldn't need to struggle so hard or become dependent on external supplements and medical intervention to maintain it.

Scholar Kathleen LeBesco, author of the 2004 book Revolting Bodies?: The Struggle to Redefine Fat Identity, thinks that the problem with psychological approaches to fat is their tendency to collapse all weight gain into "disordered eating." She argues that we need a new angle of looking at fat that can "tease out who is engaging in compulsive overeating or bingeing—versus who is fat for reasons that aren't what you'd describe as 'psychologically unhealthy,' but that end up being aesthetically 'vile.'" She points out that in American culture, "we don't seem to care about compulsive overeating as long as the body looks a certain way. So it's not really about the practice, it's about the aesthetics."

Nowhere is this call to conformity seen more clearly than on television. Hefty individuals have expanded beyond the stereotypes of, for instance, the fat comedian, and spilled over to talk shows and reality programming, but they haven't necessarily fared better for their efforts. Daytime talk shows love to feature social outcasts in a parade of shame and judgment, and fat folks—along with more active transgressors like cheaters, beaters, and sexual predators—are a staple of the afternoon tv dial. But to dig into our culture's obsession with weight and dieting, we need to tune in to two reality shows that purport to tackle the real issues behind weight.

Both NBC's The Biggest Loser and VH1's Celebrity Fit Club divide their participants into two teams and put them through a series of competitive weight-loss tasks. Combining the challenges with a generous helping of tough love, they ultimately reward those who lose the most. I first tuned in to The Biggest Loser during a week in which all food was removed from the house except temptation food supplied by the producers: piles of cookies, stacks of donuts. The ostensible reason for this was, as the show established, that the "real world" outside the cloistered set is full of temptations, and that none of the contestants would succeed in keeping weight off if they easily succumbed to breaking their diets. In practice, though, it was akin to putting a group of alcoholics in a room with an open bar and chastising them when they cracked.

On The Biggest Loser, losing weight is simply another strategy in a means to an end: winning the "game" and collecting the $250,000 prize. And while a short disclaimer at the end of each program reveals that a physician and nutritionist provide supervision, the camera's gaze rests only on the contestants and the two trainers. The focus on calorie counting and exercise flattens the discourse about roots of weight gain and roads to real weight loss. It eliminates any consideration of the social and political implications of corpulence, evaluation of fat rhetoric, or analysis of the very concept of "obesity" itself.

In the more realistic (and, one might argue, more humane) Celebrity Fit Club, celebs stay at their own homes, keep their day jobs, and remain on the show throughout the season; a nutritionist and a psychologist (the aforementioned Dr. Papadopoulos) are integral parts of the show. Although viewers aren't privy to the details of all psychologist-participant interactions, we do learn enough to make rudimentary analyses of each celebrity's psyche and the root cause of their weight issues.

For instance, we witness the gymnastic-coach father of onetime Saturday Night Live cast member Victoria Jackson as he flips through photo albums of a young Jackson. "Here she is at 5," he says, pointing his daughter out from an indistinguishable group of leotard-clad girls. "See, she's already bigger than the other girls."

Later, Jackson reveals that when she confronted her father about his fatphobic comments he insisted that he was just joking. "And what are you now?" one of the Celebrity Fit Club panel of weight-loss experts asks. "A fat comedienne," she laughs.

In these discussions of the psychological implications of the participants' weight, we get a more expansive view than that provided on The Biggest Loser. Still, these are simplistic evaluations: While one person has an addictive personality rooted in a shortage of nurturing, another let his need for career success distract him from his health.

Not least of Celebrity Fit Club's shortcomings is its superficial sketching of such recurring characters as Addict on the Verge of a Relapse, Sassy Black Woman, and (my personal favorite) Fat-Positive Plus-Size Model—filled last season by rock offspring Mia Tyler and this season by former America's Next Top Model contestant Toccara. Both seasons' FPPSM initially resisted the compulsory weight-loss quest and offered subtle resistance to body norms—but in the end did lose weight. Toccara's weight loss was spurred by the eventual resentment of her teammates as well as a growing competitiveness. Still, she remained comfortable in her body and in the season finale announced she would gain weight to return to her "perfect weight" of 180 pounds.

What, exactly, are the producers hoping to convey with a participant like Toccara? Is she there to build drama, add conflict, or provide an opposing viewpoint? We'll never really know, because Celebrity Fit Club posi­tions all participants—even the few who are clearly self-confident and well-adjusted—as pathologically wounded, medically unhealthy, and in deep denial. When Toccara loses weight, we're expected to think, Damn, she looks good, and join the panel in expressing chagrin at her determination to replace her (slightly) minimized curves.

Even Papadopoulos, who is proud of her efforts to provide a positive influence on Celebrity Fit Club, recognizes that "in general terms, what we are still saying is, 'Your value lies in the way you look.'" Not surprisingly, Cooper goes further, arguing that the show reinforces "the wrongness of fat" and, worst of all, disconnects viewers from their own bodies.

It's worth wondering who, in the end, these shows are for, and whether the intended audience alters their meaning. Perhaps in between the sit-ups, the judgment, and the baring of psychological wounds, viewers are intended to get a sense of what it means, in this time and place, to be fat. However, since we're provided such shallow representations of each fat contestant, viewers are more likely to walk away feeling good about ourselves in comparison to corpulent participants, and validating our feelings that fat is bad, dieting good, and competition even better. There are small sparks of political resistance implicit in the presence of hefty bodies and fat-positive individuals on shows like these, but they are too quickly snuffed by the larger context. When it comes to reality diet shows and their ritualized exorcism of our shadow selves—the internal Other, the Fatty within—we all lose.

American media has been owned for over 100 years. Time to cut through the matrix, while we still can.

While the American economy dips further, many people simply will not be able to afford higher qualities of nutritious foods. It has bulk, but greatly lacks in substance, so we eat more and more trying to fill what the body needs and not getting it.

Manufacturers must know this and, of course are not eating Top Ramin (with all the wheat is has) that can show its presence in ones rear end.

Casting dispersions on corpulent people is a fine diversion from the facts that at large, our food today is most likely less healthy than what our grand parents or great grand parents on the farms were eating. It is not accident to some EU countries refuse to take genetic 'food' from the USA, while many here are given no warning and, as time passes, less cchoice.

However, the methods that are used to determine "normal" weight ranges are limited in their estimation of what constitutes obesity <a href="http://thefatlossfactors.org/">Mike Stewart</a> 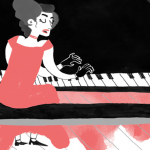 by Kate Drozynski
Spektor is as much if not more of a storyteller than a pop songwriter, and that has never been more true than on Remember Us to Life.