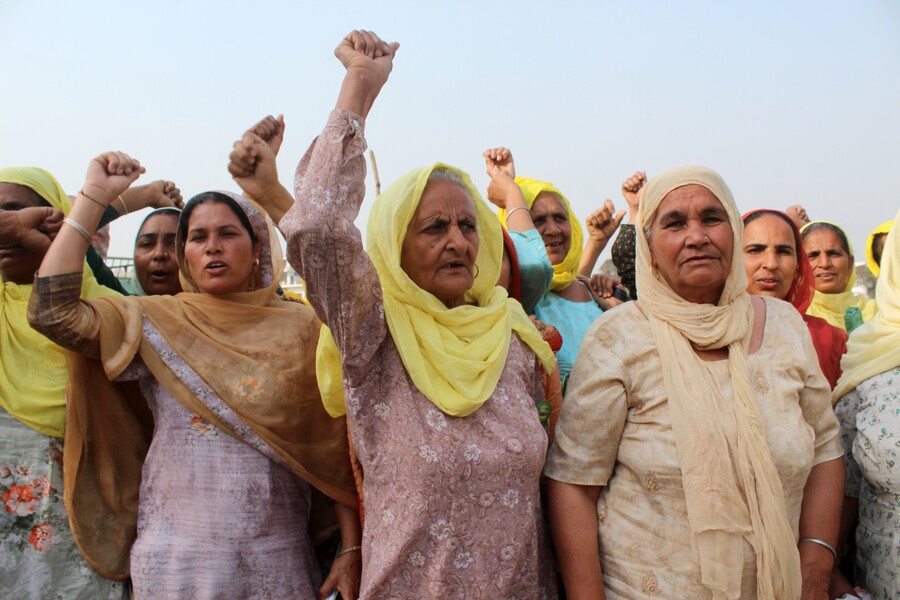 Women farmers shout slogans as they participate in the ongoing farmers protest against new farm reforms on the occasion of International Women's Day at Tikri border (Haryana-Delhi), on the outskirts of New Delhi, India on March 8, 2021. (Photo credit: Mayank Makhija/NurPhoto via Getty Images)

As more than 300,000 farmers across India close in on nearly three months of continuous agitation against the Modi government’s new and exploitative farm laws, international solidarity has been weak at best. Although Twitter support from Rihanna and Greta Thunberg, while resulting in venomous responses from the Indian government, has helped shed some light on the farmers’ plight, actors across the West—wellness influencers specifically—who depend the most on these farmers’ livelihoods seem fine basking in their relative silence. The predominantly white wellness-industry influencers who have built huge empires by appropriating, repackaging, and profiting off traditional Indian practices and products produced directly or indirectly by the very farmers currently encamped outside New Delhi remain frustratingly quiet as the protests continue.

The Western wellness industry and its army of holistic practitioners, herbal healers, and turmeric-latte-sipping social-media influencers have long been guilty of stealing and selling traditional practices from other cultures. Their particular so-called connection to (re: dependence on) India is evidenced by the centrality of products like ghee, ginger, and turmeric in their wellness practices, as well as their embrace of traditions such as yoga and Ayurveda. Yoga might have traveled to the United States in the 1800s, but it only surged in popularity in the ’60s and ’70s, right around the time Ayurveda made its first appearance in America. The cult-like following for these practices, however, seems to have begun in the late ’90s and early 2000s. In fact, the spice turmeric became a hipster-household staple only in 2008, when Gwyneth Paltrow and her problematic “lifestyle brand” Goop began touting its anti-inflammatory benefits. As demand for alternative medicine increases exponentially each year, the global Ayurvedic market alone is expected to be valued at $14.9 billion by 2026. Indian exports (especially herbs, spices, and medicines) made up a sizeable amount of this market in 2019, and Prime Minister Narendra Modi has credited the COVID-19 pandemic with a 45 percent increase in exports of Ayurvedic products between September 2019 and September 2020.

Nearly 60 percent of the Indian population works in either agriculture or an allied sector. These numbers indicate a direct linkage between the products we consume in the West and their monetary impact on a large section of the Indian population. Like most ancient traditions, Ayurvedic medicine and herbal healing are time-honored family practices learned and passed down from generation to generation. During British colonial rule in India, traditional medicine, herbal healing, and Ayurveda were dismissed as voodoo science, defined by a nonmodernity and backwardness that perpetuated the notion of colonial supremacy. It is ironic—perhaps more irksome—for many Indians today to witness the commodification and fetishization of the very beliefs, products, and methods that only gained acceptance and popularity upon their adoption by white people in the West. The fact that these actors and businesses are reliant on capital and labor from India further implicates their neocolonial operations.

Given that Ayurvedic medicine and herbal healing are traditional family practices, the proliferation of short courses or online teaching in the West not only insults the very essence of such practices but also cannot, by virtue of its very nature, provide a complete education. These half-hearted attempts at studying another culture are a disservice to the host culture and fail to address important flaws in these systems of learning, including Vedic spirituality’s inherently violent nature, one built on a caste-based oppression that continues to function in South Asian society today. Inadequate research and a lack of in-depth engagement already prohibits such wellness actors from engaging in cultural appreciation, but it is the lack of effort put into crediting and compensating those whose goods and knowledge they rely on that’s most offensive. Overall, very few attempts are made to fairly remunerate the workers and farmers who produce the ghee for extortionately priced Bulletproof coffees and the ginger for $5 detox shots. With most wellness influencers having failed to make a single trip to India—let alone learn from nonwhite teachers—their failure to provide credit to those with the particular know-how on which they built their businesses and social-media followings are the malpractices that solidify this industry as culturally inappropriate. Claiming such knowledge as one’s own is a form of theft.

So now, when the farmers who fuel this industry are demanding basic financial support, where is the showcase of solidarity from the wellness influencers? Why aren’t their social-media platforms being used to raise awareness, fundraise donations, and demand action from the Modi government? Even if their online activism is performative at best, we know slacktivism can be a powerful tool in creating awareness and pushing certain agendas into mainstream political narratives. From Goop’s Paltrow and Poosh’s Kourtney Kardashian to everyday influencers such as @empoweredautoimmune or @kaleandchocolate (who, combined, have nearly 200,000 followers), the reach of wellness influencers can’t be underestimated. Both Goop and Poosh’s lowkey fanatic followings could be harnessed into something productive. In fact, complementing their “gut-biome” Instagram Story highlights with resources informing their followers on what is happening in India, why it matters to them, and how to donate could be materially helpful.

Maybe now would be a good time to roll the mat away, extinguish the incense, take a deep yogic breath, and truly deepen one’s practice by engaging in a self-reflexivity that has long been missing in the wellness industry as a whole.

If the proposed new farm laws are written into law, Indian farmers will be more susceptible to exploitation by the private corporations that will gain control of their crop prices. They will also lose the protection of mandis—government-regulated markets where farmers sell their crops for a minimum price, ensuring their basic income. Perhaps influencers simply don’t feel directly impacted because they don’t know or care for the labor behind their ashwagandha. Or perhaps, and far more distressingly, they don’t see how India is involved in their practice at all. A key component common to cultural appropriation, whether it is maca powder from Peru or ghee from India, is how quickly its origins become dislodged in the narrative adopted and perpetuated in the West. The cherry-picking nature of cultural appropriation has a tendency to erase the history, culture, and socioeconomic realities that are attached to the product or service in its home country. If there is a high probability that most wellness influencers are unable to trace the origins of the products they sponsor, it makes perfect sense that the struggles of Indian farmers do not resonate with them.

If there was ever a time and an opportunity to begin making amends for some of the problematic practices that form the backbone of the white, Western wellness industry, it would be now. Supporting Indian farmers feels like a very small debt the wellness industry owes them, especially when their three-month-long peaceful demonstrations are being met with tear gas, police brutality, internet shutdowns, and general governmental inaction. Maybe instead of starting this morning’s practice with a Sanskrit chant, it would be more meaningful and fulfilling to ensure one is not complicit in oppressing those who were unable to transform their ancestral and local knowledge into profit-churning empires. Maybe now would be a good time to roll the mat away, extinguish the incense, take a deep yogic breath, and truly deepen one’s practice by engaging in a self-reflexivity that has long been missing in the wellness industry as a whole.

If you can, please consider donating to any and all of the organizations doing tremendous work to support the farmers: Khalsa Aid, Save Indian Farmers, Sahaita, and the Save Punjab’s Farmers GoFundMe.

Read this Next: Continental Grift 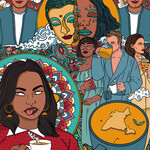 by Mallika Khanna
A cultural obsession with Indian-centered wellness also comes from a place that acknowledges that everyone, sick or not, is in some way fundamentally broken.
by Simar Deol
View profile »