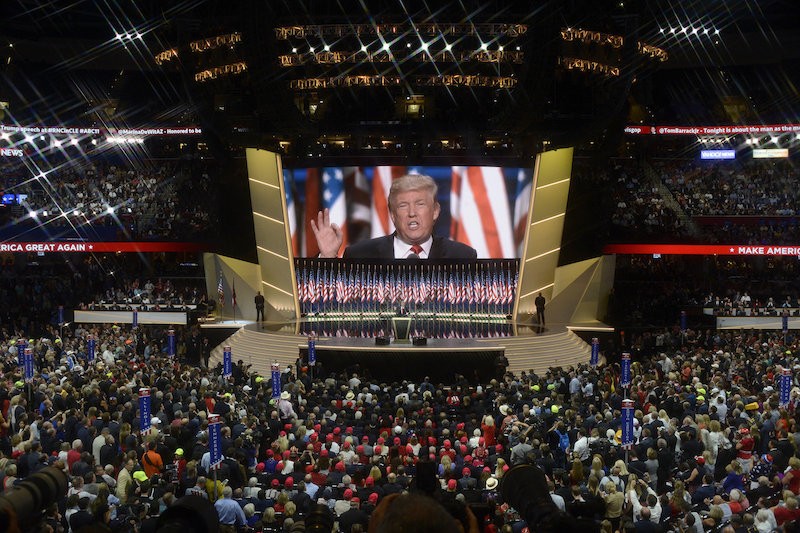 This week’s Republican National Convention has exposed a party in disarray. Republicans are scrambling to grapple with the reality that Donald Trump—in all his unscripted, unmanageable, taco-bowl-eating profanity—is their actual candidate. But they shouldn’t be surprised. The Republican Party’s political strategy has been germinating Trump’s rise to power for 50 years. They brought Trump on themselves.

Humans often ignore the reality that actions have consequences. The Republican Party’s current mess is due to their reliance on using racially divisive language and policies to cultivate and mobilize their base. Thanks to 50 or so years of right-wing “small government” propaganda—which they’ve ramped up in the last eight years, stoking the fires of racism and xenophobia—it’s no wonder that the socially conservative masses have outvoted the Republican Party establishment’s more mainstream candidate picks.

The origins of the GOP’s particular brand of race-baiting can be found in the “Southern strategy,” which political strategists employed after the 1964 Civil Rights Act to lure Southern whites who were opposed to integration into the GOP fold. At the time, Republicans recognized that using racism as a political tool would alienate Black voters, but they assumed the GOP could be a dominant party without the Black vote. Once divorced from the need to craft a platform that would appeal to non-whites, the party was free to focus on keeping its base scared, using coded language and racially targeted policies that pandered to whites’ fear of Black folks disrupting the white supremacist status quo. 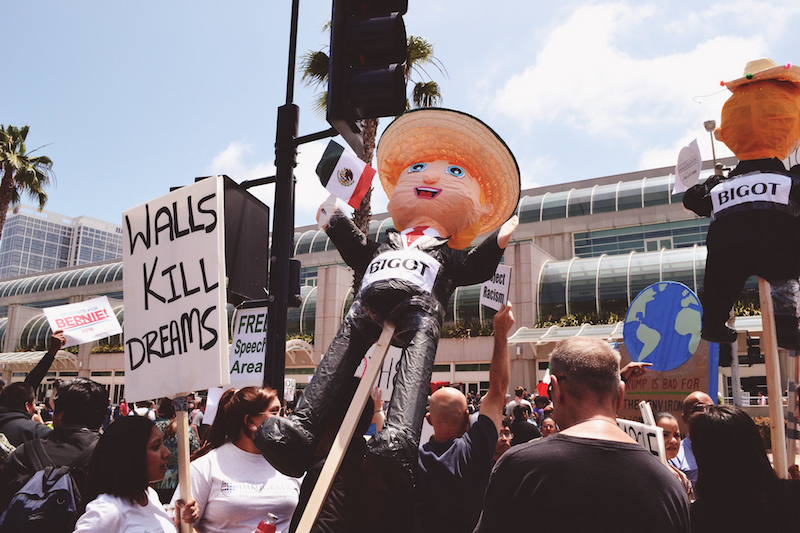 An anti-Trump protest in San Diego this May. Photo by becc (Creative Commons).

Nixon’s “war on drugs” is one example of a policy that specifically targeted Black Americans, both by its design and in its execution. The drug war has successfully disenfranchised generations of Black men and women, promoted the militarization of local law enforcement agencies, and led to the criminalization of Blackness. Tying drugs to Black people allowed politicians in both parties to swap out “niggers” for “criminals” when speaking to the public with no real loss of meaning. It also allowed for the creation of mandatory sentencing laws, which were ostensibly meant to protect “law-abiding citizens” from the masses of drug-fueled criminals, but ended up being disproportionately used against Black and brown people in order to keep them on the new plantation—prison.

During the Reagan years, the drug war was expanded and marketed to children via the “Just Say No” campaign. On the surface, this campaign seemed to be relatively benign. Keeping kids off drugs isn’t exactly something that people can reasonably protest. However, the fear of childhood addiction the campaign invoked, combined with the continuing racially coded rhetoric of the drug war, facilitated the creation of the school-to-prison pipeline, leading to the mass incarceration of countless young Black and brown people. Republicans had successfully associated Blackness with criminality to the point that Black children were not actually children but future criminals in the making.

Similarly, the GOP worked to associate poverty with Blackness. Although the majority of welfare recipients are white, the stereotypical “welfare queen” is Black. Blaming America’s economic woes on freeloading Blacks allowed elected officials to continue crafting policies that solely benefited the wealthy. The Republican-led overhaul of welfare during the Clinton years was ineffective, serving only as a salve to wounded white egos, assuring them that those “undeserving, lazy Blacks” weren’t stealing any of their tax dollars. The same is true of affirmative action—the majority of its beneficiaries are white women, but it is portrayed as being used primarily by Black folks and is thus blamed for a litany of society’s ills. Misdirecting attention to the problem of supposedly unqualified Black people stealing qualified white Americans’ jobs enabled those jobs to be shipped overseas for the benefit of Republican corporate contributors. 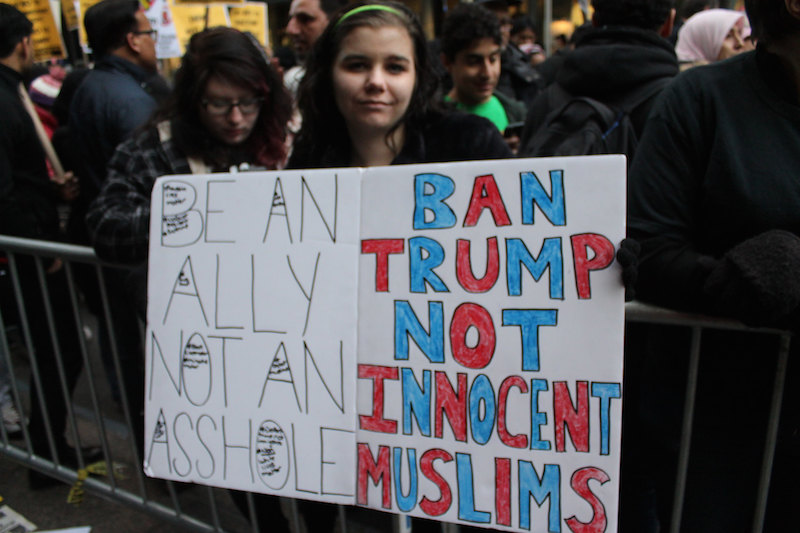 By the end of the Clinton administration, the GOP had become skilled not only in using racism as a political tool but in using sexism, classism, and homophobia as well. These type of “wedge issues” were effective in appealing to evangelical Christians and other socially conservative voters. Abortion, women’s rights, and gay marriage became the go-to topics sure to  divide the Republicans from the Democrats. As long as Republicans could pin the cause of white Americans’ struggles on the Other—Black and brown folks, queers, uppity women—they could count on their base falling in line.

“States’ rights” moved from being code for supporting slavery to being code for supporting “traditional marriage.” The phrase “family values” was used to distinguish the upstanding white nuclear family from the immoral, single-parent households of Black and brown people and the “alternative lifestyles” of queer folks. Right-wing talk radio reiterated and clarified the message put forth by politicians, using much less ambiguous language. Republican voters were indoctrinated with the belief that America was going to hell in a handbasket, all because queers and people of color were forcing the country to the left.

With the birth of Fox News in 1996, the propaganda wing of the GOP came into full bloom. Claiming to provide “fair and balanced” news coverage, Fox News actually served as a mouthpiece for the Republican agenda. Fox offered viewers news curated to match their worldview and utilized “us versus them” rhetoric to isolate their viewers from the mainstream. All media other than Fox became “liberal media,” and liberal media was controlled by minority interests—women, people of color, gays, Jews, etcetera—which were portrayed as being in direct opposition to the interests of white, “hard-working” Americans. Fox notoriously eschews fact-checking, preferring to manufacture its own facts to evoke fear in their audience and employ sensationalism to distract from a lack of substance. During George W. Bush’s presidency, Fox News propagandists worked to consolidate the Republican base, reinforce pre-existing prejudices against minorities, and obfuscate the real, structural issues underlying the problems facing the country. 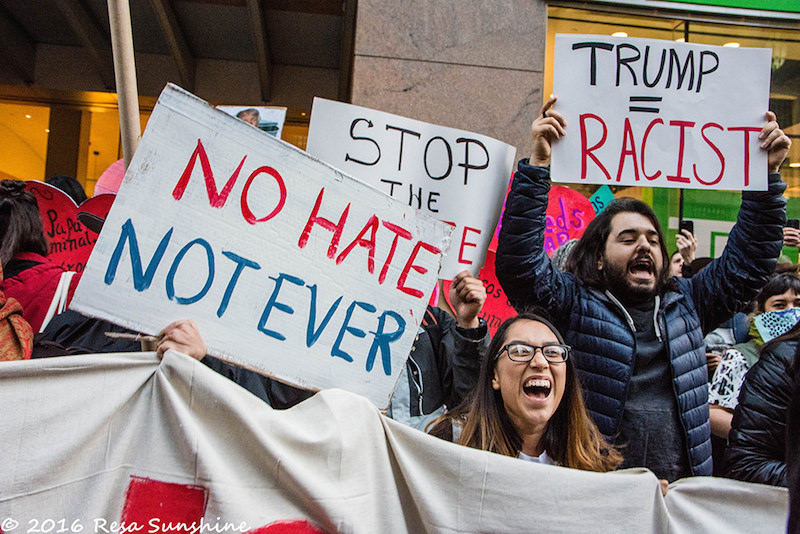 The 2008 presidential campaign marked an escalation in the race-baiting employed by the GOP, led by Fox News. The spotlight on class stratification created by the economic crisis of the time meant politicians were forced to search desperately for ways to distract voters from the policies that led the economy to near-collapse. Once again, minority groups were blamed for the state of the union. Mexican immigrants were simultaneously freeloading and taking all the jobs. Gay people were turning the United States into the new Sodom and Gomorrah. Barack Obama wanted to destroy “white culture.” The pump was primed for the inevitable swell of racist outrage that followed Obama’s election.

It is important to highlight the difference between the usual hyperbolic criticism levied at the president by the party not in office and the racially charged criticism directed at President Obama. It is true that Democrats directed much “florid rage” at George W. Bush during his tenure. However, that rage, whether hyperbolic or not, was not cultivated in the soil of anti-Black racism. Republicans took advantage of white anger at a perceived loss of status and fed it, all the while using the fact that a Black man was in the White House to deny the continued existence of institutionalized racism. Legitimizing racism, whether it is done explicitly or using dog-whistle politics, has the not-so-surprising effect of emboldening racists. The perceived decline of race relations during Obama’s presidency is mainly owed to this validation of white anger.

For the last eight years, the GOP has worked to foment racial unrest amongst whites in order to strengthen their base. White rank-and-file Republicans have been convinced by Fox News propaganda that they are a shrinking majority and they must act now to take their country back from the encroaching masses of colored people. This inciting rhetoric has exacerbated the racially intolerant climate we are already living in. Yet the interests of the Republican elite are not necessarily served by racism and other forms of bigotry. In fact, bigotry is bad for business. It has mainly been used as a GOP recruitment tool, appealing to those who readily blame minorities for whatever misfortune they are experiencing when that blame should instead rest with their elected officials and the social institutions that facilitate economic stratification. Up until now, this has been a relatively effective strategy. Unfortunately for the GOP establishment, Donald Trump has managed to destroy decades of their hard work by playing the interests of the base against the interests of the party elite in a spectacular fashion.

Trump successfully leveraged white fragility to become the Pied Piper of bigots, leading the members of the Republican Party, who are so inclined, away from the clutches of the establishment and into a brighter future, where white supremacy is secure and the dream of American exceptionalism hasn’t been tarnished by the reality of American imperialism. Since scrutiny of the policies put in place by Republican politicians reveals their ineffectiveness at relieving the burden on white working-class and poor Americans, as well as their ineffectiveness at eliminating the “minority threat,” rank-and-file Republicans were easily convinced that their party has failed them. Indeed, it has. The GOP has been playing a shell game with its base, attempting to distract their base with the shiny toy that is white supremacy. Now, it is no longer effective—and not for reasons that are likely to be beneficial to the rest of us. 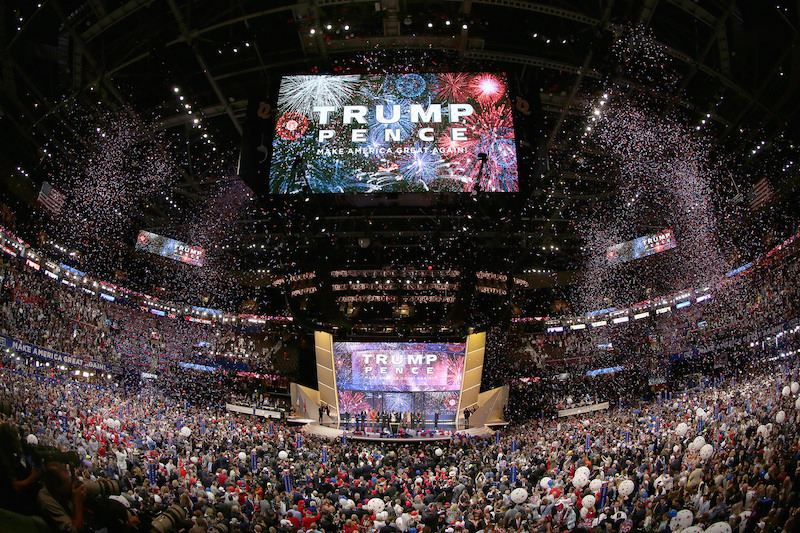 Ideally, the Republican base would reject white supremacy as a reward. Instead, Trump has revealed that a significant fraction of the Republican Party prefers a candidate that is openly racist, sexist, and homophobic and is willing to enact extreme policies to match their worldview. Their leaders have merely been exposed as duplicitous, not genuinely interested in the wedge issues they champion but in using them as tools to keep the base in line. The rightward shift demanded of the GOP as a result of Tea Party pressure, which until now has been primarily limited to congressional candidates, now extends to the presidency. No longer can Republicans present candidates that use coded language to appeal to bigots while remaining relatively center-right in practice.

Whether or not Trump wins this election, we all lose. Republicans will have to choose between bringing their party into the 21st century or descending further into the morass of bigotry and willful ignorance they have created with their divisive strategies. The Democratic Party will likely drift further right in order to attract those Republican voters who aren’t quite raging bigots but who don’t necessarily agree with the more socialist policies of the left. With both parties clustering close to the center-right, it is unlikely that those voters whose beliefs are further left will see themselves represented in the mainstream political landscape anytime soon. Reactionary, panic voting seems to be becoming the norm, where people of color, queers, and women are compelled to rally behind the Democratic candidate in response to the spectre of a Republican president with a mandate to legislate away their humanity. Trump’s success in securing the Republican nomination seems to guarantee that the ignorance and intolerance that have characterized the last eight years of Republican politics aren’t going away anytime soon.

Relevant: The High Stakes for "Quantico" and Its South Asian Star 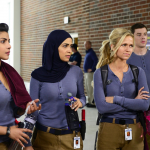 by Stephanie Abraham
"Quantico" is the first U.S. television drama to feature an Indian actress in its lead role.