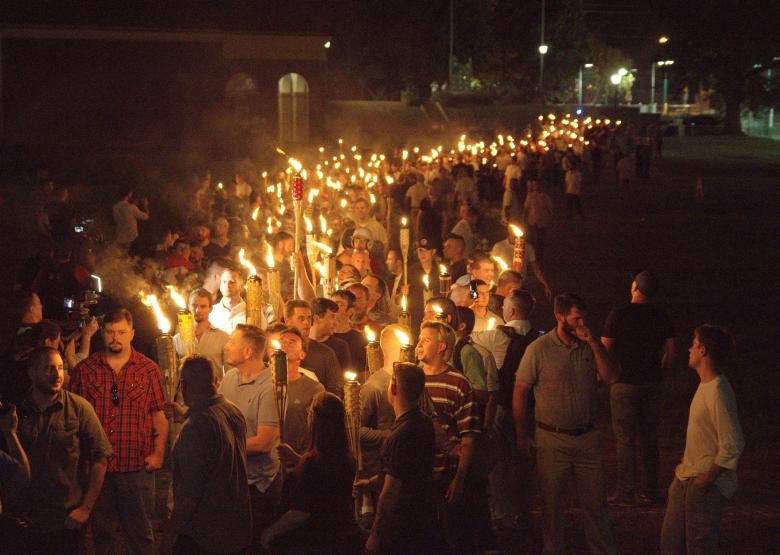 Fragility. We’ve been talking about it all year in a monthly longform series—and we all bear witness to its devastating impacts on a daily basis—but few events have offered such a crystal-clear display of fragility than what transpired at the University of Virginia and in Charlottesville this weekend. Once again, white fragility erupted into violence, and you need to know exactly what happened.

White nationalists from across the country gathered for “Unite the Right,” a march designed to inspire terror and intimidation thinly veiled as a protest against the removal of Confederate statues, in Charlottesville, Virginia this weekend. On Friday night, hundreds of white people, led by Grade AAA asshole alt-right leader Richard Spencer (a graduate of UVA perhaps best known for being punched in the head back in January) marched with tiki torches toward a statue of Confederate general Robert E. Lee, chanting, “You will not replace us” and “Jews will not replace us” while surrounding peaceful counter-protesters who had assembled to demonstrate for love and justice. The statue white nationalists were protecting was one among dozens of others scheduled for removal.

White supremacy is not a recent phenomenon. It is the founding and continued institutional ideology of this country. Trump may have managed a lukewarm and delayed rebuke of the KKK in his second speech about Charlottesville, three days after the fact, but we won’t forget his first, where all he could muster was a typically vague, typically cowardly indictment of violence “on many sides.”

We won’t forget, not even for a minute, that some of the highest positions in the current administration are occupied by white supremacists. We won’t forget who appointed them to those positions. And we won’t forget that it was white men and women of all educational, religious, and economic backgrounds who elected Trump to office which gave him the power to do so.

We see mainstream media’s hesitance to call this what it is: homegrown domestic terrorism. We see the ACLU defending the bodies and actions of white supremacists in the name of free speech—reinforcing our national denial of the fact that marches organized explicitly to spew hate at Black, Brown, and Jewish citizens are in themselves violent acts.

Like each of you, we’re here to bear witness and annotate these historical events. But we’re also here as a fiercely independent feminist media outlet to publish perspectives and amplify ideas that will change the course that lies ahead. Keep reading. Keep taking care of yourselves and taking care of each other. Keep acting out and showing up. Our light will shine brighter than a bunch of ugly-ass tiki torches. This feminist community is only getting stronger, louder, and more powerful.

The momentum is ours.

Erecting statues of confederate leaders was never about celebrating confederate heritage. Not even for a second. [Esquire]

Here’s a recap of what happened in Charlottesville over the weekend. [New York Times]

Violence on many sides? No. Full stop. [Buzzfeed]

Just a few months ago, most people considered the alt-right to be a fringe group. But when does a fringe movement stop being fringe? [The Atlantic]

And let’s also remember that the white supremacists who marched in Charlottesville are a part of the tradition of fascist, racist rallies in America. Those tiki-bearing bigots are Americans, too. [The New Yorker]

The alt-right, white supremacists, racist, fascist bigots—they’re hiding in plain sight as our neighbors, coworkers, and in some cases, family members. It’s time to lift their masks. [Buzzfeed]

You should know that we’re not just talking about men. Women have a long history of white supremacy, too. [The Cut]

Racist, anti-Semitic violence can be difficult even for adults to discuss. Here’s how to talk to kids about it—because sooner or later, it’s going to come up. [LA Times]

These weren’t rallies, and they certainly weren’t demonstrations. Name what happened in Charlottesville what it is: Domestic terrorism. [Color of Change]

There is so, so much you can do in your own community to provide relief in Charlottesville.  [Sara Benincasa]

And here are six things you can do right away to show your solidarity with peaceful counter protesters. [Refinery 29]

If you’re a white person and you haven’t yet, it’s (way, way past) time to get over your white feelings and start taking action for Black lives. [The Cut]

Familiarize yourself with both covert and overt acts of white supremacy so that you’re not unknowingly perpetuating violence. [Twitter]

Join an Indivisible group in your community and take action for justice on a regular basis. [Indivisible]

What is it like to see white supremacists march on your campus? Tune in to hear students from the University of Virginia reflect on this weekend’s events. [New York Times]