What Just Happened? From Fake News to Real Bullets 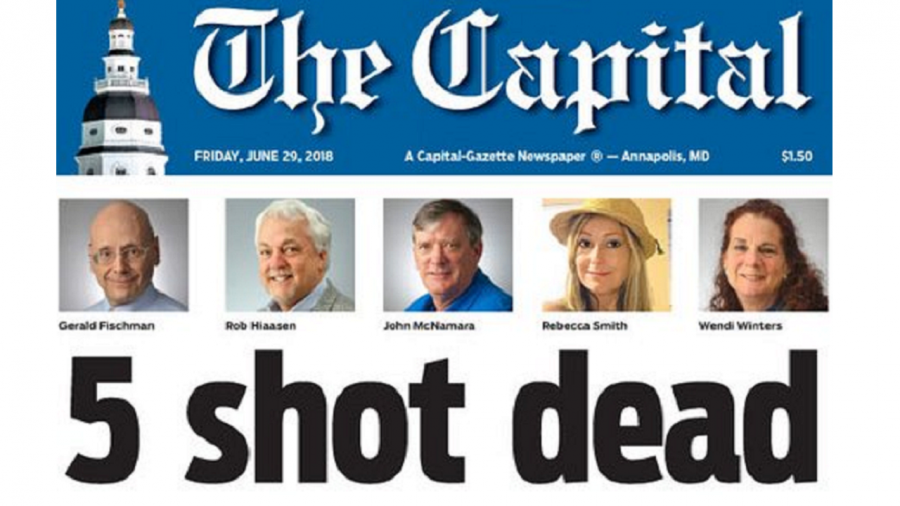 We all knew this would eventually happen. Every day, Press Secretary Sarah Huckabee Sanders stands behind the podium and accuses journalists of lying about President Trump on everything from cabinet firings to sex-scandal payouts. In turn, Donald Trump claims that the media is scapegoating him and that the Robert Mueller investigation is a “witch hunt.” Trump has long made reference to the press as “the enemy of the people,” and his latest proclamation—that the “media is our biggest enemy”—happened this past Monday night at a rally in South Carolina. What did the president and the press secretary think would happen?

Eventually, the blood of journalists would be spilled.

Just days before the shooting, white supremacist Milo Yiannopoulos told The Observer that he “can’t wait for the vigilante squads to start gunning journalists down on sight.” Encouraging violence against journalists fuels the pre-existing agenda of violent men like the Capital Gazette shooter. The shooter targeted the Capital Gazette after filing a defamation suit against the newspaper in 2012 and harassing the newspaper’s journalists online. As word of yesterday’s shooting at the Capital Gazette came over social media, it was impossible not to flash back to a season two episode of The Handmaid’s Tale in which Offred is housed in what used to be the offices of the Boston Globe: an empty, bloodstained office where people trying to report the news accurately were slaughtered.

Even in a normal, functioning democracy, journalists are frequently met with violence when they try to hold the powerful accountable; in the dictatorships Trump so admires, their murders and disappearances function as pointed warnings to others. This year already began with more than 260 journalists in jail as Joel Simon, the Executive Director of the Committee to Protect Journalists, wrote on World Press Freedom Day. Thirty-four journalists, including the five victims of the Capital Gazette shooting, have been killed this year. The global climate of repression and violence has caused Reporters Without Borders to call 2018 one of the most dangerous years for journalists and a real threat to democracy.

“The unleashing of hatred towards journalists is one of the worst threats to democracies,” Reporters Without Borders Secretary General Christophe Deloire said in their annual report about press freedom. “Political leaders who fuel loathing for reporters bear heavy responsibility because they undermine the concept of public debate based on facts instead of propaganda. To dispute the legitimacy of journalism today is to play with extremely dangerous political fire.”

We know we can look forward to spin, to rationalizing, to more accusations of “incivility” in the coming days as we learn more about the shooter, his victims, and the survivors who are already speaking out (and clearly not here for the usual bullshit). But for now, here is everything that we know and that you should too.

1. Capital Gazette reporters report on the targeted attack in their own newsroom, which left five dead. This is how they did it. [Capital Gazette, King 5 News]

2. Milo Yiannopoulos confirms his statement about shooting journalists, but insists that they were “just a troll,” and that he was “not being serious.” [USA Today, The Hill]

4. Journalists are criticizing President Donald Trump for his anti-press rhetoric following the shooting at the Capital Gazette. [Washington Examiner]

5. The suspect in the shooting at the Capital Gazette has been identified. It appears he had a long-standing grudge against the newspaper for reporting on his stalking conviction. [The Washington Post, The Independent, The Daily Beast]

6. Surprise, surprise: The shooting suspect has a history of harassing women. [CNN]

7. Authorities are now holding the suspect without bail, after indications that the attack was planned. [USA Today]

9. The Capital Gazette still published its paper Friday morning, but left the opinion page blank in honor of those killed. [The Baltimore Sun, The Hill]

Even in a normal, functioning democracy, journalists are frequently met with violence when they try to hold the powerful accountable; in the dictatorships Trump so admires, their murders and disappearances function as pointed warnings to others.

You can donate to a GoFundMe to help pay for medical bills and funeral costs for the journalists killed in the Capital Gazette shooting. [GoFundMe]

Call your representatives to talk about gun control. Use this to walk you through the process. [Elite Daily]

It’s never a bad time to make a donation to Everytown and continue the fight for gun control. [Everytown]