How to Support the Current Uprisings against Police Brutality | Bitch Media 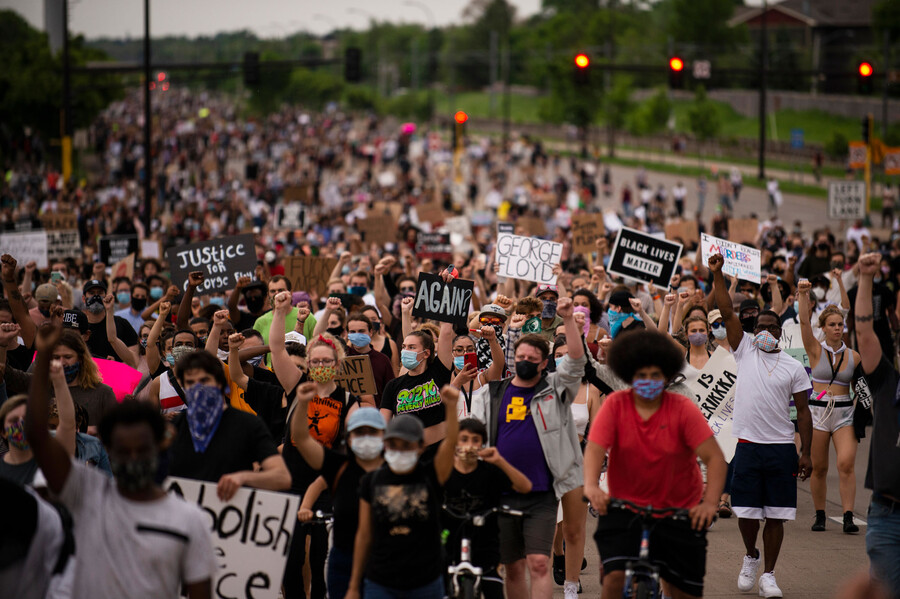 Protesters march on Hiawatha Avenue while decrying the killing of George Floyd on May 26, 2020 in Minneapolis, Minnesota. (Photo credit: Stephen Maturen/Getty Images)

How do we continually end up in this place, mourning another Black person dead at the hands of a police officer while corporate media clutches its pearls over the rightful anger of protestors rather than examining the structures that abet and protect state violence?  This time, the victim is 46-year-old George Floyd, who was killed by four police officers in Minneapolis, Minnesota, on May 25. Like Eric Garner, who was killed in 2014 by police officers in Staten Island, New York, Floyd was unarmed and pleaded with the officers who pinned him to the asphalt, repeating the words “I can’t breathe” as the life left his body. And like Garner, Ahmaud Arbery, Tamir Rice, and so many other victims of police brutality, Floyd’s final moments were captured on video and spread across social media for the entire world to watch and mourn.

Floyd’s murder has sparked a particularly visceral reaction for a few reasons: He died amid a pandemic that has disproportionately killed Black and Brown people while leaving more than 30 million people in the United States unemployed. He died under the knee of a police officer whose history of violence was known to Minneapolis PD, and who cavalierly put his hands in his pocket as he took Floyd’s life. Stephen Jackson, a retired NBA player, is one of Floyd’s close friends and has been able to mobilize his network and harness media coverage. And, to put it as clearly as possible, Black people are tired of being killed with impunity while the world watches and, in many cases, looks for reasons to say we deserved it. We are tired of people who could be our siblings, our parents, our grandparents, our cousins, and our friends murdered in the street with impunity. And when centuries’ worth of exhaustion meets frustration at a system that resists change and punishes those who agitate for it, we get an uprising.

We’re witnessing anger bubbling over into action, which sometimes takes the form of looting. We’re watching people, many of whom know the risk of protesting during a pandemic, taking to the streets anyway to say no more. We can longer wait for the criminal-justice system, which has convicted only 35 police officers of murdering civilians since 2005, though between 900 and 1,000 people are shot and killed by law enforcement each year. Now is the time to rise up, and people across the United States are meeting that demand. For those in the Bitch community who are unsure how to help or want to know how to safely protest while COVID-19 stay-at-home orders remain in place, we’ve compiled a list of resources to get started. There is no better time than now to use your voice.