What’s Next after the Year of the Teachers’ Strike? | Bitch Media

No More Pencils, No More BooksWhat’s Next after the Year of the Teachers’ Strike? 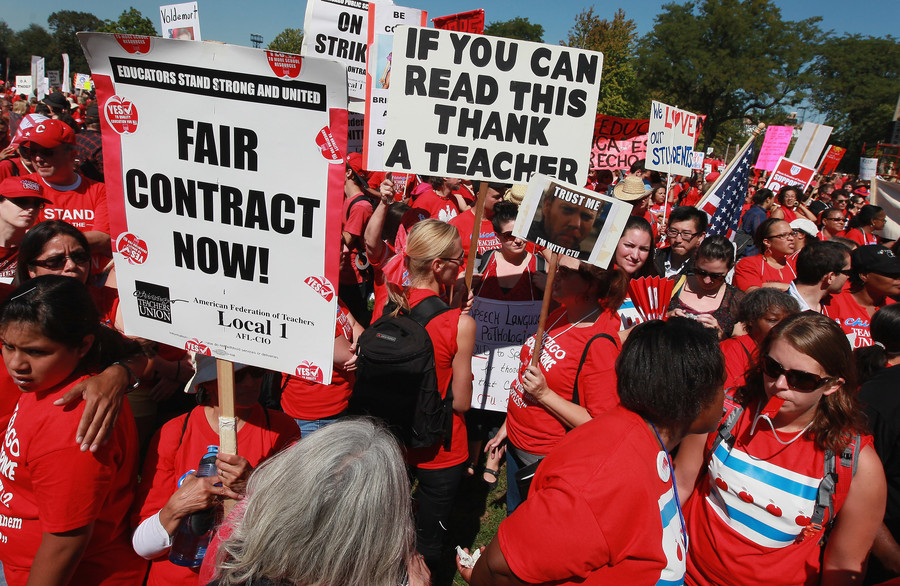 Striking Chicago teachers and their supporters attend a rally at Union Park September 15, 2012 in Chicago, Illinois. An estimated 25,000 people gathered in the park in a show of solidarity as negotiations on a labor contract continue. More than 26,000 teachers and support staff walked off of their jobs on September 10 after the union failed to reach an agreement with the city on compensation, benefits and job security. With about 350,000 students, the Chicago school district is the third largest in the United States. (Photo credit: Scott Olson/Getty Images)

In the colorful, often bloody annals of labor history, 2018 will surely be known as the Year of the Teachers’ Strike. Hundreds of thousands of teachers organized massive work stoppages across the nation, from the West Virginia state capitol to the streets of Los Angeles, taking a stand for their own rights as well as those of the students in their care. Some of them won stunning victories; others notched more modest successes, but their dedication and militancy turned their concerns—from fair wages and healthcare to the negative impact of charter schools on the U.S. public-education system—into headlines.

It also stirred up public sympathy for their struggle—a party line–crossing one that’s centered in predominantly red states saddled with Republican governments and anti-union “right-to-work” laws. Public-sector unions, which include teachers’ unions, are traditionally quite strong in the United States, but have limited recourse when push comes to shove; they’re barred from striking in many cases, including in many of the states that proved pivotal to the wave of 2018 teachers’ strikes. It’s legal, for instance, for public workers in Colorado and California to strike, but illegal in Arizona, North Carolina, Oklahoma, and West Virginia. Workers in those states went out anyway, participating in illegal wildcat strikes that showed just how serious they were about this fight.

The “Red for Ed” movement kicked off in West Virginia on February 22, 2018, but was the result of many years of movement building, particularly the intensive groundwork laid by the 2012 Chicago teachers’ strike. The driving force behind the 2018 strikes—which ultimately spread to Oklahoma, Arizona, Kentucky, North Carolina, Colorado, and California—was funding: for teachers’ salaries, pensions, healthcare, school supplies, and for the schools themselves. The Trump administration has sought to gut school funding every year for the past three years (Congress has rejected the proposals each time), and teachers and the American Federation of Teachers, the union that represents them, have been vocal about how much of an impact low wages and scarce funding has had on their abilities to do their jobs. As Vox notes, “According to a National Center for Education Statistics survey released in May [2018], 94 percent of teachers use their own money to buy school supplies,” while others have turned to crowdfunding in order to outfit their classrooms. It was—and is—completely unsustainable, and it’s no surprise that, despite the risks, once West Virginia walked, teachers in other states followed right behind.

Part of what made this particular wave of direct action so compelling is how successful it was, on multiple fronts. Given how hard it is to get a critical mass to agree on anything when the country is brutally riven by partisanship and political divisions, the public support for the strikes —from parents, students, and even presidential hopefuls Senators Kamala Harris, Bernie Sanders, and Elizabeth Warren—seemed nothing short of miraculous. Teachers made clear that they weren’t just fighting for their own livelihoods; and it was difficult for anyone but the most craven capitalist shill (looking at you, Betsy DeVos) to argue against the idea of allocating more resources for educating future generations. Images of teachers joined by parents and schoolchildren on picket lines struck a chord with the public, and Republican politicians who opposed the strikes found themselves on the outs with their constituents. Some even lost their seats—to teachers.

2019, while still young, has shown that it’s in the running to be yet another extraordinarily important one for America’s unions, with teachers still at the forefront.

The court of public opinion can make or break large-scale action; following the 2018 strike wave, a Gallup poll reported that public support of unions had risen to 62 percent. This wasn’t entirely due to the teachers—a number of important labor battles and organizing drives were already underway in 2018—but their refusal to back down and obvious concern for their young charges certainly didn’t hurt. As Rosa Luxemburg Siftung recently reported, “According to the 2018 Phi Delta Kappan Poll of the Public’s Attitudes Toward the Public School, two-thirds of Americans believe that teachers are not paid enough. 78 percent of public school parents and 73 percent of the general public say that they would support striking teachers in their own communities.”

2019, while still young, has shown that it’s in the running to be yet another extraordinarily important one for America’s unions, with teachers still at the forefront. Labor leaders worried that the result of 2018’s Janus v. American Federation of State, County, and Municipal Employees Supreme Court case would decimate public-sector unions, but—much to the chagrin of the conservative Republicans championing the case—their worst fears failed to materialize. Already, more strikes have erupted in the cities of Denver, Oakland, Los Angeles, as well as again in West Virginia, where 19,000 teachers staged a walkout to protest a Republican plan to privatize public education.

And as more than 30,000 members of United Teachers Los Angeles hit the bricks in January 2019, union leadership described their six-day strike as “a battle for the soul of public education,” outlining exactly what’s at stake. There’s no end in sight, nor should there be—as Red for Ed has made clear, there is power in a union, and there is still so much work to do.

Read this Next: Young Feminists of Color are Transforming the Labor Movement