What's Under the Polish: A Review of "Joy Joy Nails" | Bitch Media

What's Under the Polish: A Review of “Joy Joy Nails”New Short Film by Joey Ally Explores Salon Workers and Exploitation 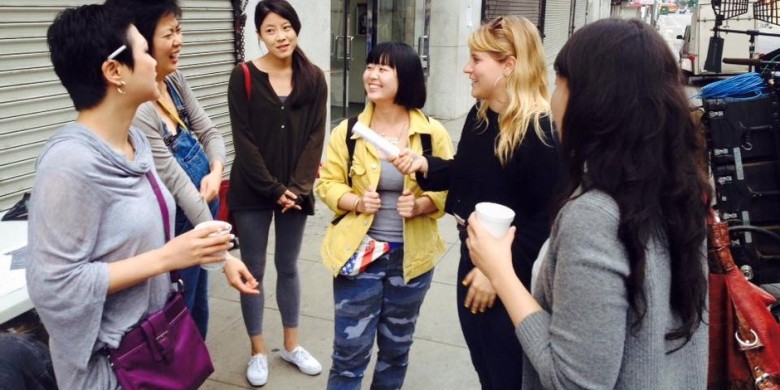 In a new short film written and directed by Joey Ally, we are taken in and through the inner and underworlds of Joy Joy Nails, a story about the lives of nail workers at a wealthy suburban beauty salon.

In the opening scene, we are dropped on to a urban sidewalk conversation in New York with Sarah, played brilliantly by Kahyun Kim, enjoying celebratory conversation with her friends that she is the new front-of-house manager for Joy Joy Nails, a Korean nail salon. After five years, she explains to her coworkers and friends, she has earned that promotion because of her face and boasts she also has the affections of the salon owners’ son, Matthew. It gets messy when Mia, a new and reserved Chinese employee played by the Yi Lui, gains the unwanted attention of Matthew, and becomes the target of Sarah’s rage.

What begins with upbeat music and bright pink neon lights quickly shifts into a disturbing drama, plunging the viewer deep into the lives of exploited salon workers. The beauty of this short film is that it condenses what we know of the insidious classism and socioeconomic injustices in this industry thanks to print exposes like “Unvarnished”—a 2016 Pulitzer Prize series finalist for local reporting by Sarah Maslin Nir. Nir’s reporting revealed the hazardous working conditions of nail salon workers, and Joy Joy Nails is a perfect accompaniment, communicating injustices with backdrop image: juxtaposing shots of colossal houses in Connecticut suburbs of customers with the crowded bunkbeds and a community bathroom of workers. The territories are clearly defined in this film as immigrant and undocumented beauticians are transported between worlds they live and work by a van that shows flashing symbols of an empty American capitalistic promise (the Empire State Building decked in blue and red) for these women.

Director and creator Joey Ally creates a marvel of linguist braiding in this short film; selecting subtitles only some of the times and mixing the dialogue with English, Korean, and Mandarin. Even when there is no subtitle, viewers will remain transfixed in the moment, relying on the universal language of pushing, shoving, confrontation, tears, and condescending tones. The climax of the movie is a scene perfectly shot in shadow with all three languages; the tension heightening when neither character, Sarah bullying in Korean and Mia yelling and returning volley in Mandarin, cannot understand the other. But the crux of the plot is revealed in the masterful delivery from Mia in broken English, “I no want sex. I no want baby. I no want him.”

Nir’s New York Times reporting led to critical conversations about the nail industry, and social justice activists can cheer for those measureable notes of progress. But Joey Ally achieves something in a similar vein as Joy Joy Nails was an official selection for Tribeca Film Festival. Sarah’s character development and true boss-lady handling of Matthew pulls the story to a conclusive ending that may feel a bit indulgent, but is satisfying nonetheless. Joy Joy Nails ends imperfectly but deliciously; a closing that left me smiling; grateful that the fictitious characters find a way to remedy what they can in an unwinnable system.

As a Filipina American feminist writer and editor, I stand and applaud for the journalistic and artistic achievements that bring greater awareness to human rights and feminist issues of domestic and international slavery, trafficking, immigration, and the abusive working conditions impacting women of color. It is because of writers and artists like Nir and Ally who commit to uncovering the truth of a situation that more policies change and conditions are improved for marginalized populations. It is a critical example for those with media leverage and clout. As a storyteller, though, I am also eager for the day when stories about women of color are documented, created, and told by women of color. Even more buried than the story of women of color, are the independent voices of color in media who worked on these issues long before the New York Times did. And in the aftermath, controversy remains within the communities most deeply impacted once the story of nail salon workers went viral. One can only wonder how power dynamics embedded in a nail salon are reflected in other industries, including and perhaps particularly, the news media.

Joy Joy Nails not only takes on the injustices revealed by Nir’s piece, but also deepens it with themes of sexual violence, racism between Asian cultures, and reproductive health. What could be portrayed as two women caught in a workplace love triangle is actually an unforgettable human rights story that will change the way you view nail salons and its workers.

All of that and more in 18 minutes.