On Instagram, White Makeup Artists Are Profiting off of Black Death | Bitch Media

Performance over ActivismOn Instagram, White Makeup Artists Are Profiting off of Black Death 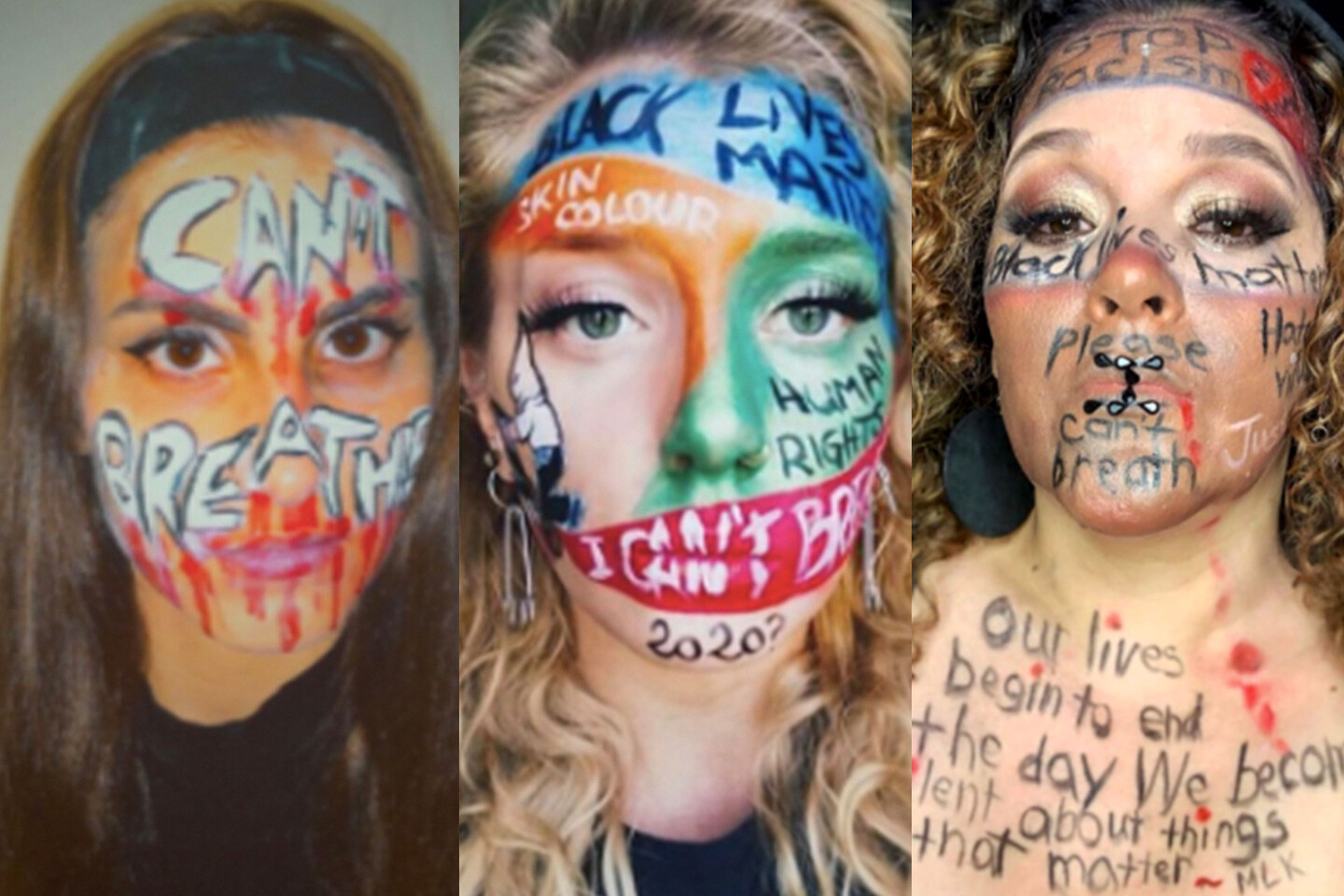 On May 25, George Floyd, a Black man living in Minneapolis, was brutally murdered by a white police officer named Derek Chauvin, who knelt on Floyd’s neck for eight minutes and 46 seconds during an attempted arrest. Floyd’s death—and his repeated “I can’t breathe” pleas—was captured on video and quickly went viral on social media, inspiring uprisings led by Black organizers in cities across the country including Minneapolis and St. Paul, Minnesota; New York; Atlanta; Louisville; and Washington D.C. Floyd’s death, as well as several other recent deaths of Black people such as Breonna Taylor and Tony McDade at the hands of the police, have also been a catalyst for activism on social media, as many have shared links to bail funds, tips for safely protesting, and historical information about abolitionism. While much of this online activism has been useful and informative, some has been more controversial. What’s even more surprising is the source of the controversy: makeup artists.

On Instagram, many makeup artists, the majority of whom are white women, have referenced Floyd’s death in their makeup looks by painting the words “I can’t breathe” or “Black Lives Matter” on their faces in bright colors. As Black YouTuber Alissa Ashely pointed out on a recent viral Twitter thread, these photos are normally accompanied by a long caption that references Floyd’s death, police brutality against Black people, and a call to action. @Madipricemakeup, a white makeup artist who has since deleted her Instagram account, posted a photo of herself with the words “I can’t breathe” artistically placed around her eye to highlight her eye-makeup. Ashxchuu, a white cosplay and makeup artist with more than 2,900 followers on Instagram, posted a close-up photo of their nose and mouth with the words “I can’t breathe” written on their lips and makeup strategically placed around their nose, presumably to look like they had been assaulted by the police. Ashxchuu has since deleted this photo, and many other white makeup artists who similarly tried this trend such as @lisyprbeauty1111, @allymortacci, and @sfx.dima have also made their accounts private or deleted their photos.

Responses to these makeup looks have been mixed. @Sfx.dima posted a photo where she painted blood all over her face alongside the words “can’t breathe” written in large letters, and she received some concerned comments from followers. “This is really exploitative of the Black Lives Matter movement. Please don’t cosplay things like this just to get likes,” one user said, while another commented, “This is a performance and not activism. Delete this. Donate. Sign petitions.” Though many of these makeup artists similarly use political hashtags in their photo captions, including #JusticeforGeorgeFloyd and #BlackLivesMatter, they also centered themselves by showing their faces and showcasing their makeup capabilities, rather than focusing on Floyd himself or the other Black people most affected by this political moment.

Upon first glance, this trend among makeup artists might seem innocent, as many other white and non-Black people have unquestionably used their social media in more actively harmful ways when speaking about recent uprisings. But this trend still deserves examination regardless of intent. Black aesthetics, such as darker or bronzed skin, fuller lips, and thicker eyebrows and eyelashes are traits that many white makeup artists and influencers have appropriated in recent years. The Kardashians come to mind as influencers who are guilty of “blackfishing,” or profiting off of Black beauty standards as white women, and many other white makeup artists and influencers have also been criticized for this behavior in the past. This behavior indicates that while white makeup artists are capable of mapping Black aesthetics or culture onto themselves, they’re still unable to raise awareness for Black politics in a meaningful way.

“I feel that these makeup looks are extraordinarily [lacking] ways to bring awareness to the current climate of our country,” Amanda Elimian, a Black content creator, YouTube personality, and makeup artist, told Bitch in an email. “There are so many other ways to bring awareness instead of poorly scribbling ‘I can’t breathe’ on your face. An actual act of solidarity would be to break your Instagram aesthetic, which many are actually concerned about, and post a Black Lives Matter image with details about how to donate to bail relief funds or petitions to sign.”

These makeup artists’ actions are particularly ignorant in light of the history of white women aiding police efforts to arrest and harm Black people. In May, a video of Amy Cooper, a white woman, falsely telling the police that Christian Cooper, a Black man, was threatening her and her dog went viral, quickly becoming evidence of the ways that white women often manipulate violent and racist systems like the police to their advantage. Cooper is one of countless white women who have similarly weaponized their privilege to undermine the safety of Black people. In 2018, for example, a white woman in San Francisco called the cops on a young Black girl trying to sell water bottles in her neighborhood. In 2019, Yale doctoral Sarah Braasch, a white woman, called the cops on Lolade Siyonbola, a fellow Yale graduate student, for what she called “aggressively napping.” In light of this history, white women expressing their anger about police brutality toward Black people through a performative makeup look or Instagram post rather than through tangible support like donating to bail funds or circulating of news becomes even more upsetting and nefarious, especially so alongside their increasing social and monetary power.

While white makeup artists are capable of mapping Black aesthetics or culture onto themselves, they’re still unable to raise awareness for Black politics in a meaningful way.

Interestingly, not all of the makeup artists to try this trend were white. @littlelanivert, a Black makeup artist with more than 1,600 followers on Instagram, also posted a photo of herself with the words “I can’t breathe” painted across her mouth and tears running from her eyes, which she then deleted a few days later. The caption of the photo read “Justice for George Floyd…justice for all my people of color.”

Reactions in the comment’s section of @littlelanivert’s post were mixed. Some proclaimed that her photo was performative, while others praised her for bringing awareness to issues relevant to her community. “I really cannot tell another Black person how to grieve in this situation so if she feels that this is how she wants to show tribute, it’s not my place to tell her she can’t,” Elimian said. “However, I personally don’t find makeup looks about tragedies productive especially if there are no links to actual things like petitions, donation links, or bail relief funds, to do anywhere on or near the post.”

@Littlelanivert’s actions complicate the idea that this makeup trend is a way for white women to aestheticize Black death. Every Black person is mourning the loss of Floyd and the reality of police brutality in their own way, and if posting this photo was a genuine way for the makeup artist to process her anger and grief, then she should be allowed to do so. However, Eilmen’s critique rings true in some respects. @littlelanivert’s photo still falls into many of the same traps as those of her white peers as the post centers herself rather than focusing on an image of Floyd and doesn’t give her followers any real recourse to aid the fight to end police brutality. Black pain is not a monolith and there are many methods of grieving, but it’s important to remain critical of any online “activism” that doesn’t offer recourse for action.

Ultimately, people should be using their power to raise awareness about Floyd and police brutality in the United States, and if this makeup trend helped educate people, then it might’ve been done with a good intention Still, though, white people with a platform should constantly ask themselves how they can educate their followers on Black politics—and learn to do so without centering themselves in the process.