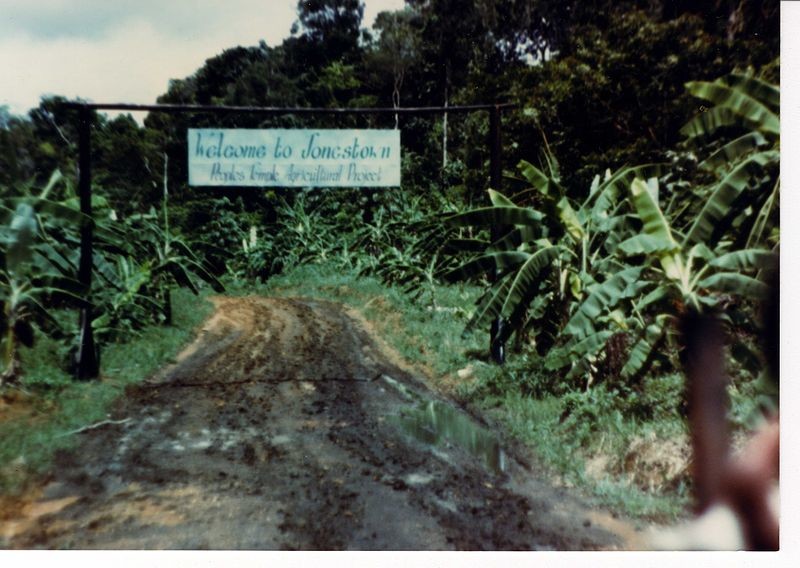 The day Jonestown died, cameras were rolling in the pavilion. NBC footage from the morning of November 18, 1978, shows a tense knot of longtime Peoples Temple members listening with shuttered faces as Jim Jones reassures them of his undying love. They’ve chosen to leave the “socialist utopia” and return to the United States—and Jones, despite his loving words, is clearly agitated. He’s not the only one, though. Look beyond Jones, and you’ll see wary eyes, folded arms, pacing, and huffing. The tension is palpable—which makes the white woman’s calm so extraordinary.

She’s wearing the clothes that will be described in her autopsy report: white blouse, black trousers. Her sleek, dark hair is scraped back in a bun. She sits on a wooden bench, thin arms looped around the back, posture relaxed. She’s talking, and though her voice is audible, her words aren’t. I wonder what she was thinking a few hours before the pavilion became the site of the mass murder-suicide of over 900 Temple members. Documents suggest she was in on the plan; to all appearances, she’s at peace with it, too.

While Carolyn Moore Layton was completing her teaching credential at California’s Vacaville High School in the spring of 1968, an announcement came over the school PA: Dr. Martin Luther King Jr. had just been assassinated. To her shock, her students started cheering.

The eldest daughter of a Methodist minister, Layton grew up in a household where Christianity meant more than attending church; it meant protests, soup kitchens, and working hard to make the world a better place. Her social conscience was matched by a high-achieving streak; after being on the honor roll throughout high school, she graduated from University of California, Davis, with a degree in International Relations. She dreamed of working for the United Nations. Instead, she married a young conscientious objector and moved to rural Northern California—mere miles from a church called the Peoples Temple, which had relocated from Indiana just three years earlier. Given Layton’s commitment to social change and racial equality, it’s unsurprising that she was drawn to the Peoples Temple, and its married leader Jim Jones.

Jones was married too. Nonetheless, they began a relationship, which led Layton to divorce her young husband. Later, they had a son together. She quickly rose within the ranks of the Temple to become Jones’s chief administrator, advisor, and confidant. Along with other inner-circle members, Layton is believed to have been one of the last people to die in Jonestown, in the privacy of Jones’s cabin. A survivor, Stanley Clayton, hiding in the jungle, claims that he heard a group cheering after silence had fallen over the pavilion’s carnage.

The story of sex and power within the Peoples Temple is also a story of whiteness and power, as it was an open secret that Jones tended to confine his sexual attentions to white people. Jones cast this behavior in a revolutionary light: He didn’t wish to perpetuate the history of Black women being sexually exploited by white men. Meanwhile, privileged white people were seen as more fickle in their commitment to socialism, and therefore in need of a “personal relationship with the cause” to secure their loyalty. 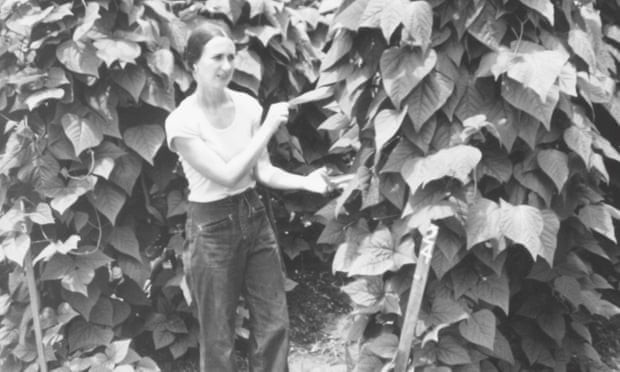 Whatever the justification, Jones’s tendency to promote those he was sleeping with led to the establishment of a primarily privileged and white leadership. They became, in their fashion, a ruling class within the socialist utopia. Though Layton was unique in her closeness to Jones, she was, in many ways, typical of a new demographic that started drifting toward the Temple after the move to California—young, educated, politicized children of the postwar baby boom. They wanted peace and equality—something better than the fearful, segregated world of their forebears.

It could’ve been a call to self-assessment and structural change. Instead, the defection led to a closing of ranks. Though the Temple’s membership continued to swell, with recruitment focused on predominantly African American communities in San Francisco and Los Angeles, the power structure remained unchanged. In addition, new strictures and screening measures were put in place. Security increased. Frisking and bag checks were implemented. Notes were taken on new visitors, and future invitations extended or denied on the basis of these notes. “45-50-year-old Black female… with a very subdued (possibly retarded) man about 50 years old and a passive teenage boy,” one such note reads. It ends, simply, “NO.”

The role of white women in Jonestown is a stark reminder that even the most progressive among us may be inclined to support dominant power structures when it suits us, remaining silent in the face of abuses of power, and even being complicit in the silencing of others.

None of this is to say that those in leadership weren’t capable, sensitive, and dedicated people, who helped transform Peoples Temple from a rural church to a significant political power in 1970s San Francisco. Yet, there were obvious weak spots, fragilities, which Jones was adept at manipulating, and perhaps even depended on to safeguard his authority.

The white women who were closest to Jones, and most complicit in propping him up after his megalomania had reached perilous proportions, are interesting to me because they resembled me physically, and in other ways. They meant well. They saw ugliness in the inequalities of the world, their own privileged place in it, and wanted to atone for their privilege by purifying themselves through the force of their commitment. They were, in many ways, perfect vessels for fanaticism. And yet, they were also white women. Accustomed, as we often are, to believing in our specialness, our chosenness, and that power, or the proximity to power, is our due. We are less critical, as a result, of how the power that benefits us also exploits.

Long before November 18, the notion of “revolutionary suicide” was discussed within the Peoples Temple. The term was coined in the 1960s by Black Panthers cofounder Huey Newton to describe the violent consequences of Black people taking a stand against white power—namely, being gunned down by police. Much as he appropriated the intonations and theatrics of Black Pentecostal church leaders, Jones co-opted Newton’s term to describe something quite different from the original meaning. For Jones, revolutionary suicide described the intentional laying down of lives in protest of an inhumane world. 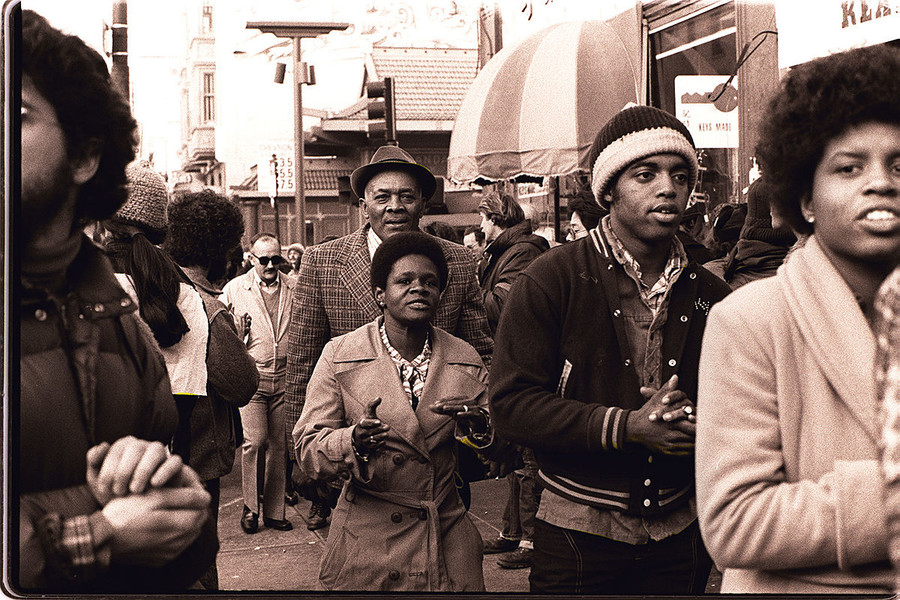 In a 1976 meeting of Jones’s mostly white planning commission, wine was served, then declared to be poisoned. “We will die together,” Jones told those present. It was a loyalty test, which had the secondary purpose of familiarizing Jones’s closest followers with the idea of dying for the cause.

The following year, after a news story was published detailing fraud and abuse allegations, Jones ordered a mass exodus to Jonestown, Guyana. Conceived as a socialist utopia, the remote jungle settlement was never intended to accommodate more than 500 people. By 1978, the population had grown to more than 1,000.

In Jonestown, talk of revolutionary suicide was disseminated again. All-night meetings known as ”White Nights,” in which the community’s problems were discussed, became increasingly common. These problems included real and imagined persecution—real and imagined—and the threat of invasion by forces hostile to the Temple’s supposedly peaceful, egalitarian way of life. A White Night was held after the May 1978 defection of trusted aide Deborah Blakey. It ended with a cross-section of the community—young, old, Black, white, male, and female alike —testifying on tape about their willingness to commit revolutionary suicide. For many, these testimonies were perhaps just lip service. That same month, cyanide tests began on Jonestown’s livestock. 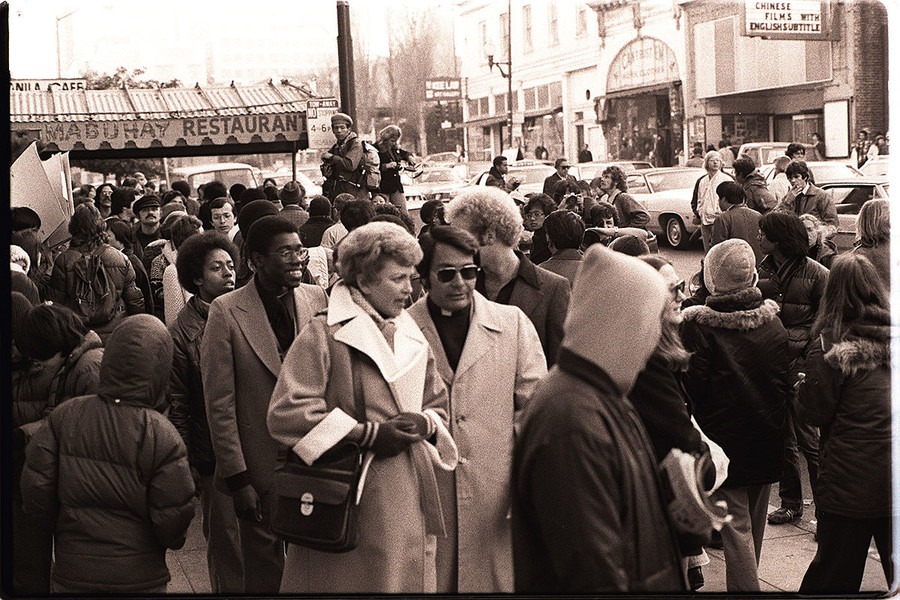 Dorothy von Beroldingen with Jim Jones at a protest in front of the International Hotel in January 1977 (Photo credit: Nancy Wong)

As in America, Jonestown’s predominantly white leadership had a greater deal of mobility and access to power than the rank-and-file. They operated the radios, controlled finances, placed orders for supplies, liaised with lawyers and visiting officials, and even travelled outside Jonestown for business. It was because of this mobility that Blakey and another high-ranking aide, Teri Buford, were able to defect. Most, however, remained loyal.

Why? The simplest answer, perhaps, is that they believed. Yet the nature of their belief is hard to pin down. “I know she believed, but in what exactly, is still a mystery to me,” one survivor, Kathryn Barbour, wrote of Layton—an intriguing statement, considering they were members of the same organization. It suggests that there was something cognitively dissonant about the belief of those who were closest to Jones. The strength of their belief overshadowed the substance.

This seems to have gone hand-in-hand with a fundamental principle of the Peoples Temple: The ends justify the means. The ends—a society free of discrimination—justified fake healings and prophecies, which brought otherwise politically ignorant audiences to the Temple (along with their life savings). They justified the breakup of relationships, sexual abuse, and the humiliation of both men and women. They justified forgery, theft, surveillance, and corporal punishment. They even justified mass murder. Theoretically, communal death was the ultimate expression of the community’s togetherness, their undying commitment to equality. 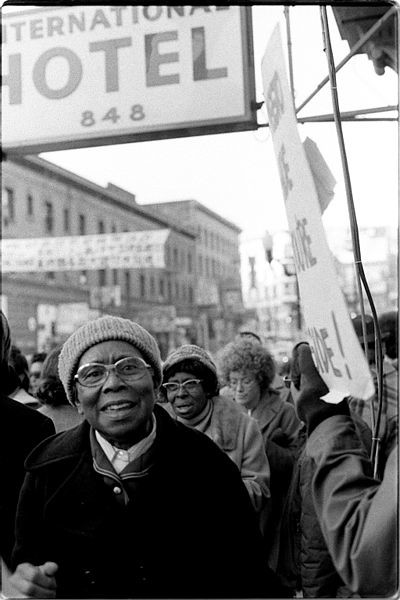 Members of Peoples Temple at a protest at the International Hotel in January 1977 (Photo credit: Nancy Wong)

There’s something remarkable about the contrast between the horror of what’s being discussed—planning the death of an entire community—and the matter-of-fact, self-deprecating language. It reminds me that an ordinary woman wrote this note; the kind who earnestly strived to make a good impression, even from beyond the grave.

The women who enabled Jones and carried out his orders were rather ordinary. Carolyn Layton, the overachiever. Karen, the socialite. Annie, the artist. Maria, the shy horse-lover. Harriet, the lawyer. They wore earrings, kept themselves awake with coffee, laughed over the funny things children do. They never would’ve called themselves white supremacists. Yet, in their eagerness to sacrifice themselves for the cause, Jones’s true believers saw their death in the abstract and by extension, the lives of hundreds of people. Over two-thirds of those who died in Jonestown were African American, the majority of them women and children.

The role of white women in Jonestown is a stark reminder that even the most progressive among us may be inclined to support dominant power structures when it suits us, remaining silent in the face of abuses of power, and even being complicit in the silencing of others. The louder we proclaim our innocence—be it through fanaticism, virtue-signalling, tone-policing, or some other means—the more we dominate, and the less we listen. And, if change is to occur, listening is key.

Laura Elizabeth Woollett is the author of a short story collection, The Love of a Bad Man (2016). Her most recent novel, Beautiful Revolutionary (2018), follows a young couple who join Peoples Temple in the summer of 1968. She lives in Melbourne, Australia. Find her at https://www.lauraelizabethwoollett.com/.