The Capitol Police Looked the Other Way during the Coup in D.C. | Bitch Media

Of Course the Police Allowed White People to Stage a Coup 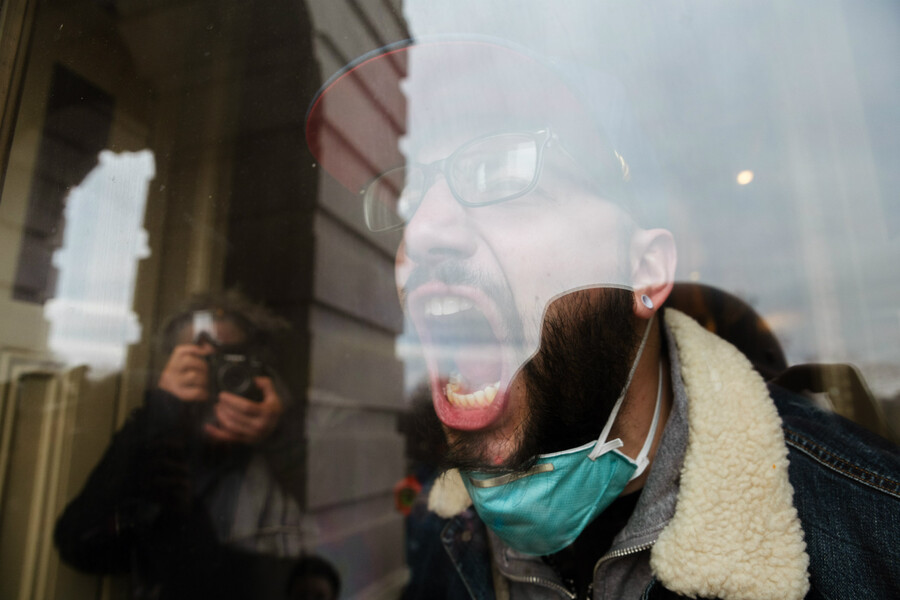 A member of a pro-Trump mob screams out at the crowd from the inside of the Capitol Building after breaking into it on January 6, 2021 in Washington, D.C. (Photo credit: Jon Cherry/Getty Images)

On January 6, as members of Congress began counting the electoral college votes at the U.S. Capitol building in Washington, D.C. to certify President-elect Joe Biden’s victory—and as many Republicans sought to derail this certification process via lies and conspiracy theories—organized Trump supporters launched a riot and began scaling Capitol walls, breaking glass windows, and storming the building. These supporters-turned-insurrectionists carried “Stop The Steal” signs; wore sweatshirts with messages like “MAGA CIVIL WAR JANUARY 6, 2021;” and flew Confederate flags, Trump flags, and the “Blue Lives Matter” flags that have become ubiquitous since the birth of the Black Lives Matter movement. One man’s hoodie read “Camp Auschwitz,” just one example among multiple other white supremacist and antisemitic symbols proudly on display. Many rioters were reportedly armed, and the FBI found at least two improvised explosive devices planted in the area. Capitol Police shot one woman inside the Capitol, who later died, although details of the shooting remain scarce.

Other than the unclear circumstances of the shooting, the Capitol Police offered scant resistance on Wednesday as the Q-deluded and Trump-worshipping trespassers broke through the perimeter and fanned out through the Capitol Rotunda. Soon the mob attempted to break down the doors to the House and Senate chambers, ultimately succeeding as members of Congress were evacuated to secure locations and told to shelter in place. Congressional leaders later shared stories about locking themselves in rooms and offices, hiding under desks, and barricading doors with office furniture as they contacted their loved ones, unsure of what would come next. As news media captured images that traveled around the world of MAGA-clad rioters yelling, taking selfies (including at least one instance of a selfie with an all-too-willing police officer), vandalizing congressional offices, looting items, and posing behind desks, Black Americans were left grappling with the obvious racist double standards at play when it comes to how police treat protesters in Trump’s America.

How could police permit a violent mob to break into the Capitol (including congressional offices with sensitive data) and terrorize elected officials, while immediately brutalizing peaceful Black Lives Matter protesters just several months earlier? While it’s true Capitol police eventually fired tear gas and flash grenades at the MAGA mob who refused to disperse, this was after they’d stormed the Capitol and disrupted the electoral college vote. On Twitter, #whiteprivilege began trending. There’s no denying that whiteness—as an oppressive organizing framework of racial hierarchy and European supremacy that has guided the United States’ ascent to superpower status on the backs of enslaved Black folks and massacred Indigenous communities in particular—is working as designed in this political moment. It’s clear that white Trump supporters are being given a literal get out of jail free card by statistically Trump-supporting police. We can’t be so naive as to wonder, “Where were all the police officers at the Capitol?” or “Why weren’t they better prepared?” when in many cases, there is considerable overlap between police and the MAGA mob.

Instead, considering that this is a nation where modern police forces can trace their history in part to the role of slave patrols in the antebellum South, we would be remiss not to foreground questions of anti-Blackness and implicit bias in any conversation about policing. Make no mistake: The domestic terrorists who converged on the Capitol to disrupt the electoral college count were overwhelmingly white, angry, and looking for a fight. As such, they were also guided by the implicit assurance their whiteness afforded them that they could storm a federal building filled with lawmakers and face minimal consequences. This is in stark contrast to how D.C. area police treated Black Lives Matter protesters demonstrating nonviolently for their very lives—the complete opposite of a violent, white supremacist riot—last June. When Black Lives Matter activists gathered in Lafayette Square near the White House to peacefully protest the police murder of 46 year-old Minneapolis man George Floyd, the police response was swift and unjustifiably brutal. In a now-infamous display of brute power, Trump ordered U.S. Park Police, D.C. National Guard, and members of the Arlington County Police to clear protesters using batons, tear gas, and flash grenades in order for him to walk across the square and take a photo of himself holding a Bible in front of St. John’s Church, basking in his self-proclaimed status as king of “law and order.”

But it’s not just D.C. Police violence against Black Lives Matter protesters in other cities was well-publicized in 2020, such as the incident in which police blinded a Denver protester in one eye with projectiles, or the time a cop in Buffalo, New York, cracked open the head of a 75-year-old man by pushing him to the ground. The Los Angeles Police Department arrested more than 500 people in one day amidst some protesters smashing store windows, begging the question, why is smashing the windows of a CVS considered a bigger threat than smashing the windows of the Capitol in an attempt to thwart democracy? The use of tear gas during the COVID-19 pandemic has also drawn intense criticism from public health experts and civil rights groups, who have argued that tear gas can be lethal when used against medically vulnerable populations and that its use by police is likely to exacerbate the spread of COVID in respiratory droplets as protesters cough, gasp for air, and scream in pain. Given how Black and brown folks are already at increased risk of contracting COVID due to systemic racism and classism, this added danger only exacerbates existing disparities.

These insurrectionists won’t go away any time soon regardless of who holds the presidency.

“When Black folks are protesting and progressives are protesting peacefully they were tear-gassed, they were arrested, they were shot with rubber bullets. They were shot with real bullets,” NAACP President Derrick Johnson told USA Today. “We watched it take place all summer long when people were peacefully demonstrating.” Democratic Representative Cori Bush, who is a noted Ferguson, Missouri, protestor, tweeted after the Capitol coup attempt, “I can’t believe domestic terrorists are roaming around inside the Capitol. I’m remembering being brutalized [as a Black Lives Matter activist] and treated like a domestic terrorist just for protesting to keep my people alive.” And MSNBC host and political commentator Joy Reid remarked:

Given the tepid responses of U.S. police to white domestic terrorism compared to their aggressive and dangerous crackdowns on nonviolent Black protest, it will be crucial for the Biden administration to invest more resources in tracking and fighting white domestic terrorism, far-right radicalization impacting white men (including through social media algorithms), and the connection between white supremacy and police brutality. For their part, Democratic lawmakers intend to launch an investigation into the police response at the Capitol. These insurrectionists won’t go away any time soon regardless of who holds the presidency, and the police’s investment in curbing white domestic terrorism remains an open question at best. If we want to shape the fair and inclusive democracy we’ve never quite reached but which is still ours for the visioning and crafting, we must level with ourselves. We must be honest about the fact, to borrow the words of poet Kyle “Guante” Tran Myhre, that “white supremacy is not a shark; it is the water.”

Read this Next: It’s Not Over 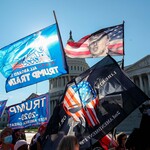 by Nicole Froio
Clearly white supremacy will not go away after a single election.