Who Are the Women Voting for Trump? | Bitch Media

Who Are the Women Voting for Trump? 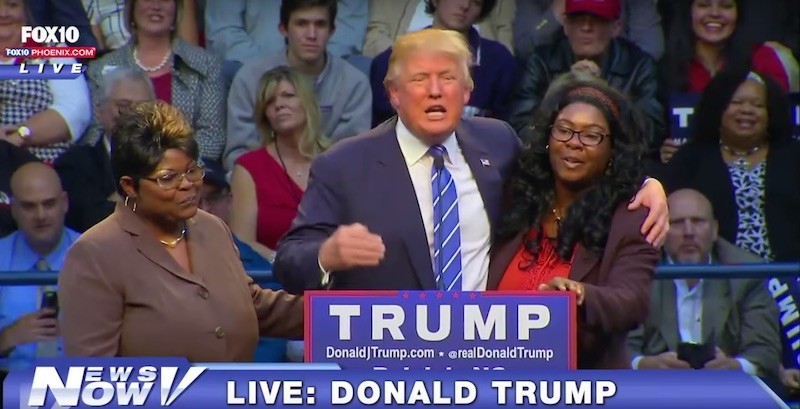 Buried in a recent poll of Oregon voters was a surprising statistic: 27 percent of women in the state said they would vote for Donald Trump in the general election. Oregon is known for being liberal—this is a state so blue that Bernie Sanders swept all but two counties in the primary this month. So the poll made me wonder: Who are these thousands of women excited to vote for Trump? While pundits have thoroughly dissected the anxieties of white males voting for Trump, there hasn’t been much analysis of why roughly 23 percent of American women are enthusiastic about a man who even objectified his own daughter.

Just to be clear: Female Trump supporters are a distinct minority across the country. Throughout this entire campaign, Trump has been America’s most-disliked presidential candidate—in political jargon, he has the “highest unfavorables” of any candidate, Democrat or Republican. In polls at the beginning of May, 61 percent of Americans said they had unfavorable views of Trump (the next most-disliked candidate is Hillary Clinton, whom 56 percent of Americans see as unfavorable). When you break down those numbers further, there’s a profound gender split among people who don’t support Trump: At last count, 70 percent of all American women see him as “unfavorable” compared to 58 percent of men. 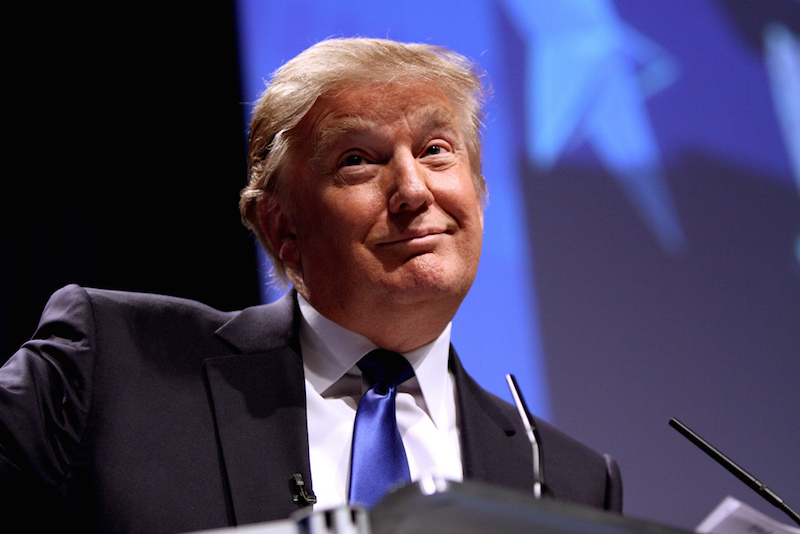 The reasons why female voters dislike Trump are excruciatingly clear. There’s his frequent comments about women’s attractiveness, the multitude of women who say he’s a serial sexual harasser, his bizarre commentary on Megyn Kelly, and (of course) his politics. His untoward remarks about women have been turned into attack ads run by both Clinton supporters and other Republicans who find it repugnant that Trump will be their nominee.

But, given all this, there are still thousands and thousands of women who say they’ll vote for Trump.

The Women for Donald Trump Facebook group—currently 19,500 members and climbing—provides a glimpse into the minds of female Trump voters. Judging by the pattern of posts on the page, female Trump supporters seem to have three core beliefs: 1) Immigrants and refugees pose a major threat to America, 2) Hillary Clinton is evil, and 3) Trump is a great leader and true patriot. 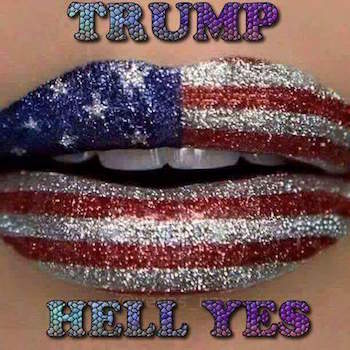 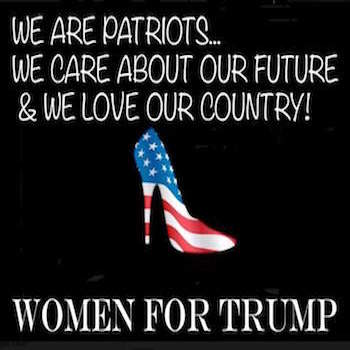 Two memes posted on the Women for Trump Facebook group show a mix of patriotism and traditional femininity.

This last part explains a lot of Trump’s appeal: Trump supporters love the way he approaches everything with absolute confidence. As NPR reporter Domenico Montanaro put it, “Trump's supporters aren't with him because they want to hear the wonky details. They want someone to channel what they feel.”

But it’s not just his gusto—it would be negligent to overlook how Trump’s staunch anti-immigrant rhetoric resonates with certain voters, including many of his most ardent supporters. That’s a point made by political science professor Melissa Deckman in her book Tea Party Women: “Trump’s support among some Republican women, who are largely white, is partly rooted in his constant refrain that the nation is headed in the wrong direction and his criticism of immigrants. Moreover, his bitter criticism of the Republican Party resonates not just with many white working-class men, but also with conservative female activists at the grassroots.”

Read This Next: Can Voters of Color Truly Get Excited About Bernie or Hillary?
Read This Next: Trump's Racism Could Backfire As He Inspires Latinas to Go Vote Against Him

At a Trump rally in North Carolina in December, sisters Lynette Hardaway and Rochelle Richardson—better known as YouTubers Diamond and Silk—gained national attention when they gave an impromptu stump speech for the candidate. Their reasons revolved mostly around his plans to build a wall between the United States and Mexico. “Now listen, he’s gonna put that wall up,” they said, to applause. “He’s gonna build it tall, and it’s gonna protect us all. We don’t want this country to fall, do we? Build that wall, Donald J. Trump!” Since then, the pair has made numerous videos vociferously voicing their support for Trump, including one where they interview other hardcore Trump fans at a private “Women United For Trump” event. Trump’s build-a-wall approach to immigration features heavily in the women’s explanations of their votes. “If Donald J. Trump builds that wall, that’s all he needs to do for me!” exclaims one woman.

One woman who is excited to vote for Trump this fall is Gabrielle Seunagal, 18-year-old African-American high school senior from Michigan. This is the first election Seunagal can vote in, and she wrote an impassioned article for Kicker about how Trump is her “inspiration and idol.” I emailed Seunagal to ask her more about what’s motivating her vote. She was kind enough to write me back, even though I made it clear that I’m the opposite of a Trump enthusiast. Her email reads like a copy of Trump’s talking points (Trump's policies will be phenomenal for America, Trump will protect our Second-Amendment rights, Trump will protect our veterans). Like other Trump supporters, she’s fervently pro–border wall and is unfazed by his comments about women. “As far as Trump's comments towards people, it's not gender based. He is not racist or sexist at all,” Seunagal wrote. “Trump treats people equally. If a man attacks him, he attacks back. If a woman attacks him, he attacks back. Ironically, in The Art of the Deal, Donald Trump actually said that he's noticed that women are better at certain jobs than men. He is not sexist. He cherishes women.”

The idea that Trump “cherishes” women is something he frequently says himself. “When you’re negative on women’s health, you can forget about it,” he said on CNN’s State of the Union in 2015. “I’m the exact opposite. I cherish women. I want to help women.” Of course, the paternalistic idea that women need to be “cherished” builds the foundation for the current wave of laws repealing women’s access to abortion that are based on the misguided idea that restricting abortion rights “protects women’s health.” But, regardless, the “cherished” sentiment apparently connects with the women who say they’re voting for Trump.

I still wasn’t clear exactly why Seunagal and thousands of other women love Trump while the majority of the country despises him. I emailed her back, “Can you tell me more about how you came to form your political identity? Do you remember when you came to see yourself as a Republican?”

“I'm not exactly sure when I became conservative,” replied Seunagal. “I honestly think it's something that I grew into. America was founded on conservatism. Conservatives promote work and effort and the American Dream. I think the Constitution is important. Strong borders are important. Low taxes are important.”

While some women have enthusiastically embraced Trump, many women, even within the Republican Party, are not excited about the prospect of him being the official Republican nominee. “I think it puts all women in an awkward position,” Republican Rep. Ann Wagner of Missouri told CBS this week. “And I want to see that tone and temperament changed.” Rep. Barbara Comstock, R-Va., feels similarly. She told the Washington Post this month that she’s a Republican through and through but can’t bring herself to throw her support behind Trump right now. “I can’t support Hillary Clinton, and I won’t be, but Donald Trump needs to earn the votes of me and many others,” said Comstock. “I can’t defend—I won’t defend a lot of the things he’s said.”

If there’s anything Trump is good at, it’s selling stuff. And in this election, he’s selling himself. He knows that the sales pitch of being an “outsider” will hit home with people who’ve felt like they’re not represented by either party. That outsider styling and his extremist, “straight-talking” rhetoric sets him up as an antiestablishment candidate, even though his anti-immigrant, anti-choice, anti-tax rhetoric is right in line with the rest of the Republican party. While that antiestablishment ethos frustrates people like Reps. Wagner and Comstock, it clearly resonates with some Americans. I guess it's naive for me to be surprised that Trump finds support with nearly a quarter of American women. A lot of Americans are anti-immigrant. A lot of Americans want to repeal abortion rights. Those aren’t mainstream American values (a majority of Americans support safe, legal abortion and a path to citizenship for undocumented immigrants) but Trump’s not a mainstream candidate. With his “outsider” approach to the whole election, he appeals to those people who feel like outliers themselves.

Read This Next: Can Voters of Color Truly Get Excited About Bernie or Hillary?
Read This Next: Trump's Racism Could Backfire As He Inspires Latinas to Go Vote Against Him

Relevant: In Yoga, Carving Out Safe Spaces for Women of Color