Who Did the Real Housewives Vote For? | Bitch Media

Who Did the Real Housewives Vote For? 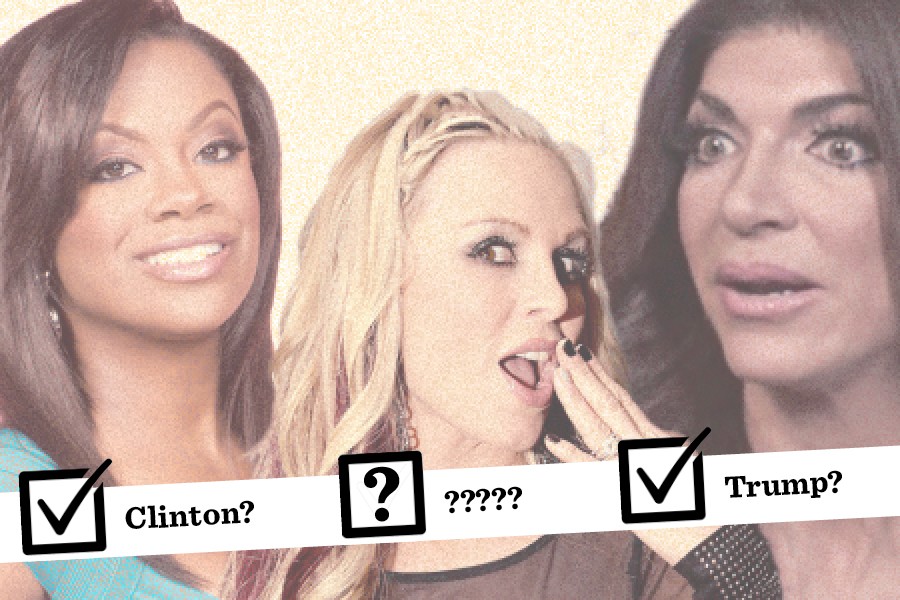 The Housewives is a huge franchise that’s spanned 11 years and nine cities (Miami and D.C. were cancelled after a few seasons). In 2015, Bravo, the network that hosts all the Housewives, was in approximately 90,891,000 American households. It also caters to women aged 18-49. Too many of us thought that Trump’s misogynist rhetoric would rightly repel women voters, but 53 percent of white women voted for Donald anyway. Given that horrific fact, it’s easy to see why the Housewives are keeping their votes secret: Whether they were #WithHer or #MAGA, the Housewives don’t want to alienate their fans. Note the tepidness with which some Housewives announce their side. Note also, that for many of the Housewives, the tweets I reference below are the closest they’ve come to saying anything about politics at all. Being a reality star who is probably required to tweet as part of their jobs (I say this because, having scrolled through all of their Twitters in this research, it’s pretty clear to me there’s something contractual going on regarding how much they tweet about Bravo programming) and being virtually silent about the 2016 election speaks volumes.

The most recent season of the Real Housewives of New York City was the first season of Housewives filmed during or after the 2016 election, which is partly why it was explicitly addressed during the reunion episodes, but the rest of the Housewives aren’t going to be able to keep mum forever. As time goes on and we’re pushed further into Trump’s sunken place, the Housewives are going to have to face up to the reality the rest of the United States is living in or risk looking even more out of touch in their golden-gated communities. As Bravolebrity and Real Housewives executive producer Andy Cohen would say, we’ll have to watch what happens.

Disclaimer: I don’t actually know who the Real Housewives voted for. What follows are best guesses based on public statements, campaign contribution records, tweets, and my deep personal knowledge of the Housewives and their personalities, honed over 10+ years of watching their antics. If any Housewives feel they’ve been misrepresented below, let me know!

I’ll update this post if and when any Housewives clarify their political positions. 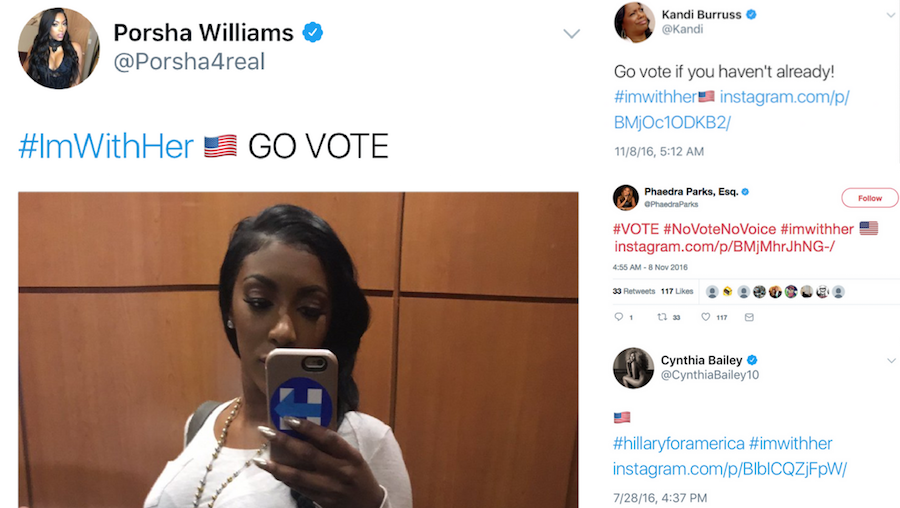 The Atlanta Housewives required the least amount of digging to figure out their political proclivities. Porsha and Phaedra went to the Democratic National Convention and were totally #WithHer and encouraging people to get the vote out. So were Kandi and Cynthia. Shereé probably voted for Hillary—no one who says #pleasedontgo to the Obamas a few weeks before the inauguration voted for Trump—and so did Kenya, though the two are the least vocal Clinton supporters in Atlanta (probably partially because Kenya was on Celebrity Apprentice in 2015.)

Still, a most-likely all-Clinton vote from the Atlanta ladies! 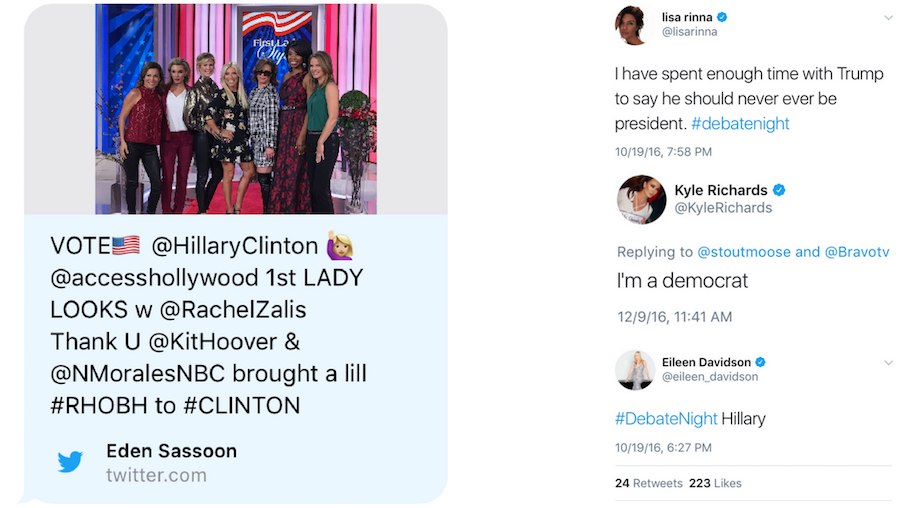 Kyle’s sister Kim (a RHOBH alum) once dated Trump, and Kyle herself was on Celebrity Apprentice this year, so that explains her tight-lipped “I’m a Democrat” decree, barely acknowledging who she supported in the election. Lisa Rinna was also on Celebrity Apprentice, but doesn’t seem worried about making Donnie mad. Good on you, Lisa! Dorit has waded into politics only so far as saying that she stands with Dreamers, which is not conclusive, but certainly leans Clinton. Eileen tweeted a lot about her Hillary support during a debate, and Eden went on Access Hollywood with her pro-Hillary election looks. 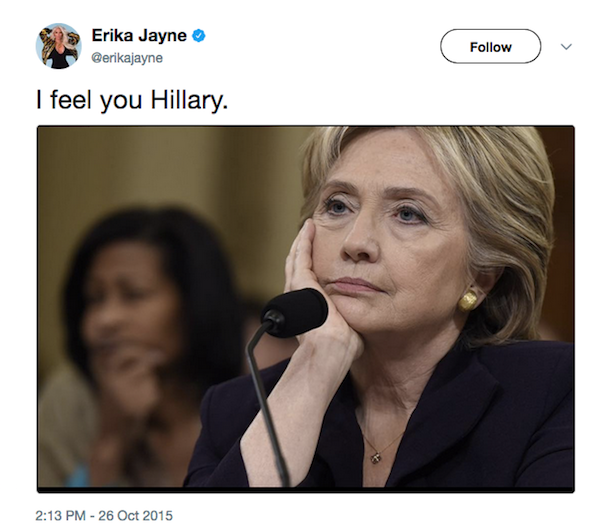 Erika has also been elusive about her party affiliation, but this image in combination with a retweet of drag performer Laganja Estranja saying he doesn’t give a fuck about Trump on election day massively tips the scales in favor of Hillary. 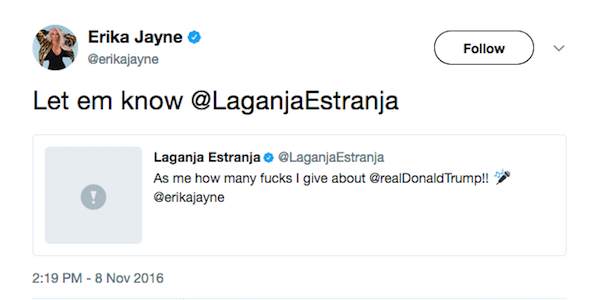 Lisa Vanderpump didn’t tweet about the election other than letting people know that she can’t vote but they should “choose wisely,” but in a 2015 interview about Trump’s candidacy she said, “I can’t support his radical statements.”

Clinton: 6 (+1 for Lisa Vanderpump who would have if she could have!) 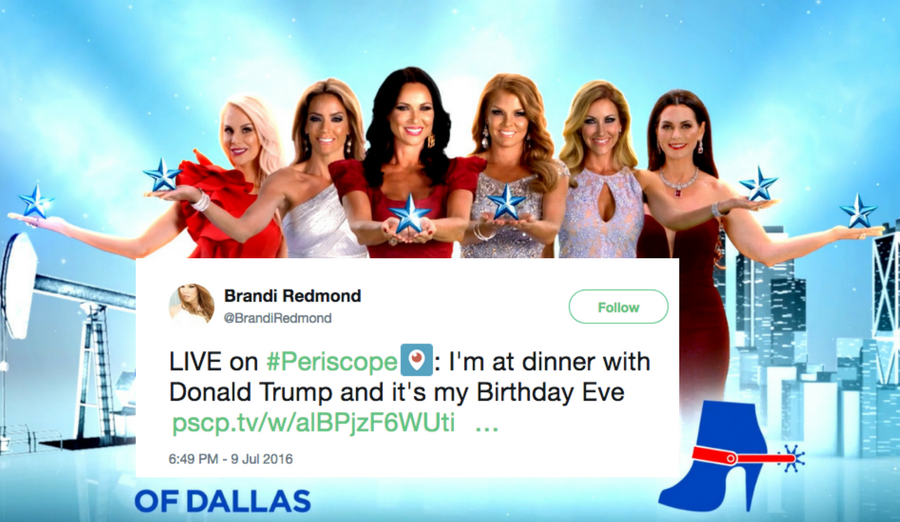 The Dallas Housewives are really trying to hide their Republican tracks and I had to do some digging to find any answers. But find them I did!

D’Andra was actually on the Texas Women for Trump Leadership Committee. Thanks for making that one easy, D’Andra!

Brandi was at dinner with Donald for her birthday last summer, and you know only a Republican would brag about being at dinner with Agent Orange a few months before the election. Stephanie doesn’t tweet about politics, but last year her husband Travis gave $10,000 to a Texas Republican Party Federal Committee and another $2,700 (the max for individual contributions) to Donald himself. Just because Travis is a Republican doesn’t mean that Stephanie is, but…it probably does. Same for Kameron and her husband Court, who gave $32,258 to Wisconsin governor Scott Walker in 2015 in support of right-to-work legislation. Kameron’s brother-in-law Chart also ran as a Republican in a Texas House race in 2014 (and check out these clearly-Republican names: Court and Chart Westcott!) It’s not conclusive evidence of Kameron’s GOPdom, but it’s a compelling argument.

In 2015, LeeAnne tweeted about her opposition to anti-LGBTQ legislation signed by former Indiana governor (now vice president) Mike Pence that led to massive boycotts of the state. Could LeeAnne be the sole Dallas Democrat? Doesn’t want to let her friends know? Let us know, LeeAnne!

Cary is the trickiest of the bunch and hid her tracks very well. I have nothing to report about Cary’s political leanings, but just going out on a limb here: Since she’s a wealthy, southern, white woman who hasn’t tweeted about politics in the past 12 months, I think that she’s a Republican. 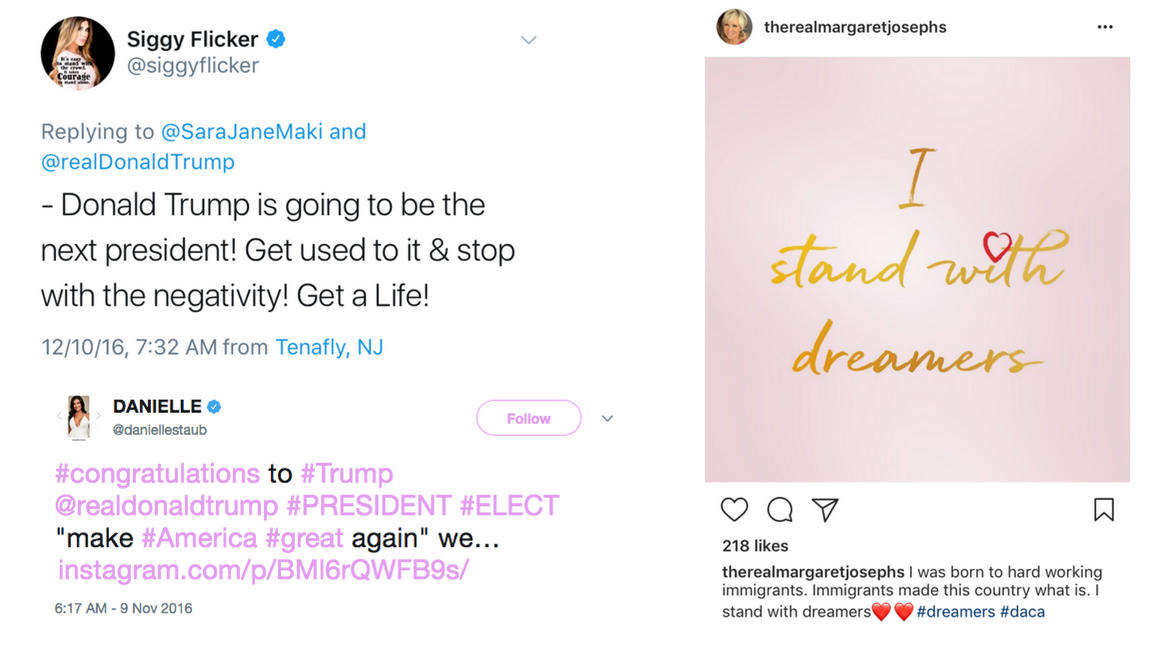 Are you surprised that New Jersey is full of Republicans?

Dolores, I see you sneakily trying to promote harmony or whatever this is, but anyone who says, “Let us all move forward united, regardless of who we voted for yesterday. #america” the day after the election is a Republican.

Teresa is one of the few Housewives who went on the record with her support for Donald Duck. Not letting herself be outdone, Danielle congratulated Trumpy on his win with a pixelated American flag. Siggy is also clearly for Trump.

Margaret and Melissa just might be the only Democrats in Jersey. Margaret is a new cast member this year, so we don’t know too much about her personality, but if she’s standing with Dreamers, she might be a Hillary supporter. Melissa tweeted about Alton Sterling and ‘gramed a photo of herself with Captain Florent Groberg congratulating him on his DNC speech. Not conclusive, but a hint in the Democrat direction. 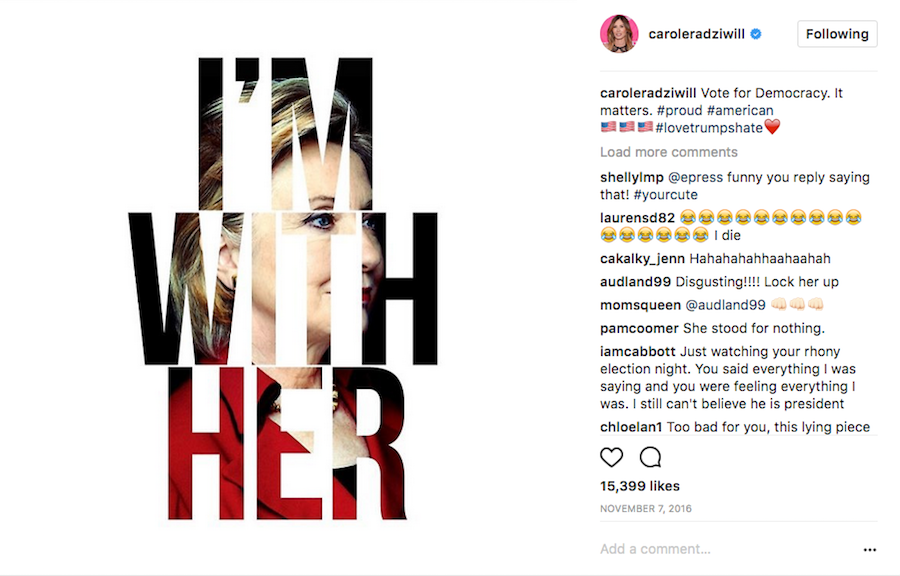 Carole, Bethenny, and Dorinda said that they voted for Hillary during the New York reunion a few weeks ago, while Ramona, LuAnn, and Sonja refused to divulge their vote.

Sonja has said that she was one of Trump’s advisers during the campaign, and while Sonja says a lot of things about her career that turn out to be lies, obviously she’s a Trump supporter if she’s going around talking about advising him and wanting to work for him. Ramona was disinvited from Carole’s election-night party after saying “incredibly rude” and “ignorant” things about Hillary, so we know where Ramona’s heart lies. Tinsley said she didn’t vote because it’s not “her thing,” so I’ll trust her at her word.

That brings us to LuAnn. LuAnn declined to say who she voted for, which naturally made me suspect that she’s a Republican. But! LuAnn gave Hillary for America $2,700 in 2015, and p.s. everything about her campaign contribution record is fantastic, from the fact that she identified herself as Countess LuAnn to listing her occupation as “actress.” Given that she has no other campaign contributions this election cycle, I’m counting the Countess for HRC! 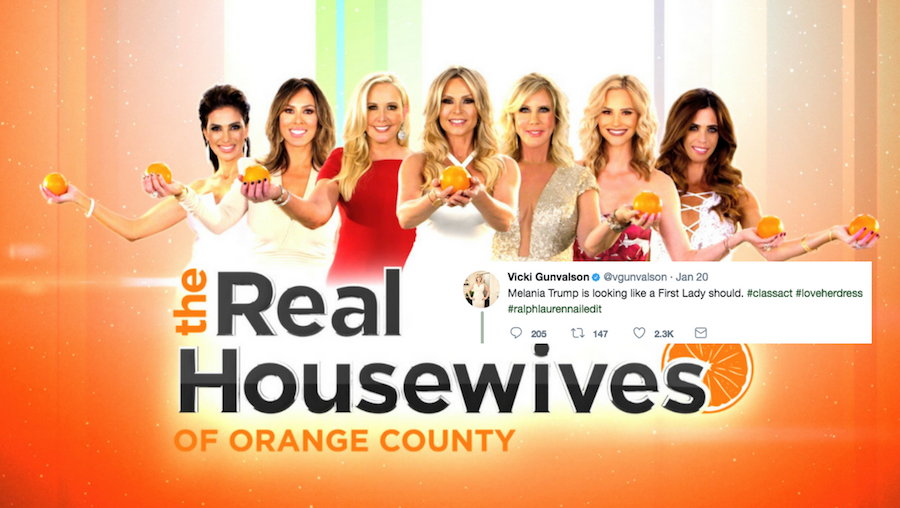 Perhaps because Orange County is the oldest Housewives franchise (the show premiered in 2006, which means that some of them have lived through three elections while being reality stars), they know how to hide their dirt. 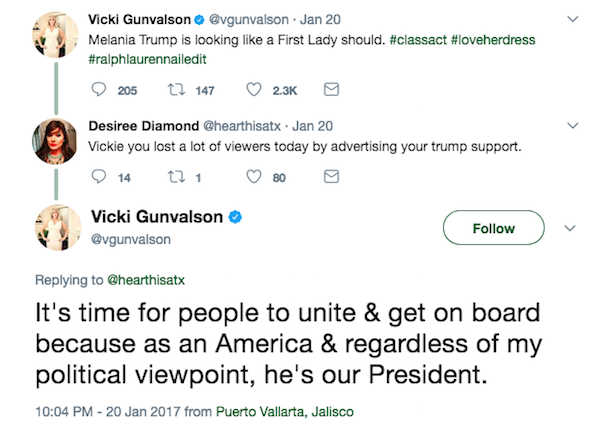 Vicki is clearly a Republican. Her boyfriend Steve Lodge also ran as a Republican in an Anaheim City Council election last year. Also, the richness of Vicki tweeting about getting on board with Trump while she’s on vacation in Mexico!

Surprisingly, both Kelly and Meghan are not fans of Donnie Darko!

And here are the trickiest of all the Housewives: Shannon, Tamra, Lydia, and Peggy. I have seen every season of Orange County in real time since the beginning, starting when I was an actual teenager living in Orange County. I know these Housewives best of all.

Peggy is new to the OC Housewives and hasn’t had much of a social media presence for long. As such, she seems to be a political blank slate, and sadly, I’ll have to mark her as an unknown.

In a recent episode, Lydia was uncomfortable going to Hamburger Mary’s in West Hollywood for Drag Bingo because of, you know, the fact that she’s uncomfortable being around gay people, so I’ll mark her down as a Republican.

And that leaves Shannon and Tamra. Back in 2015, Shannon tweeted that she was “livid angry!” about Obama’s travel causing her to be in gridlock traffic. “#BULLSHIT,” she declared. “Hope Obama has a great time,” she huffed. That’s a pretty GOP thing to tweet about, Shannon. I know so deeply in my heart that Tamra is a Republican. I know it. And yet I cannot prove it. You beat me this time, Tamra. 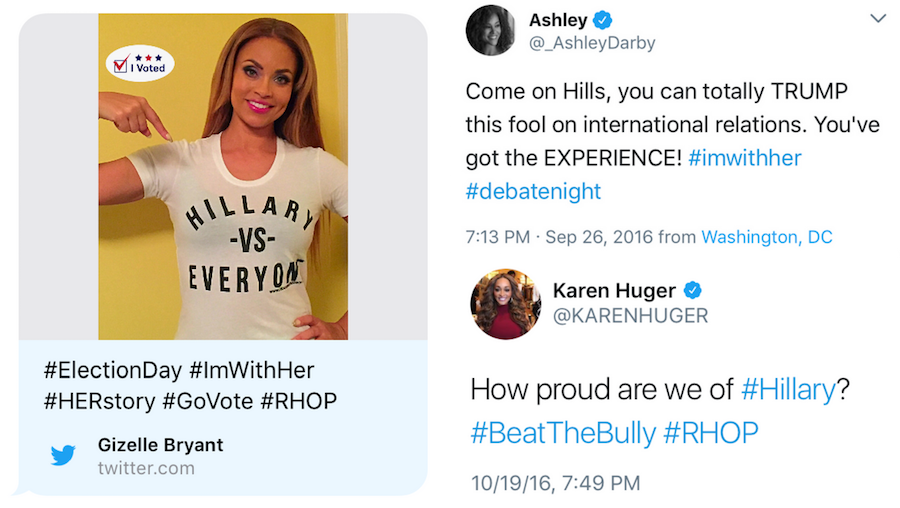 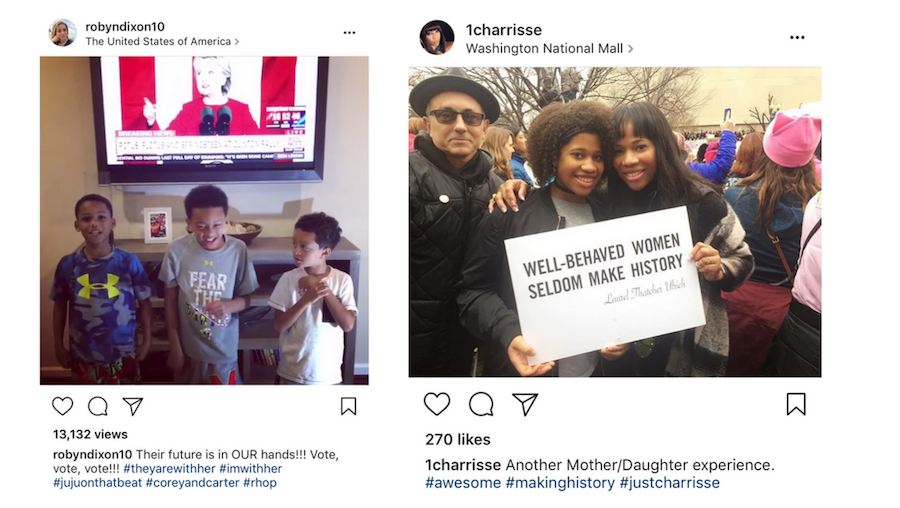 The closest Housewives to D.C. know what’s up.

Gizelle, Ashley, Monique, Charisse, Robyn, and Karen were #WithHer. Bonus points to Charisse for attending the Women’s March with her daughter!