In “Who I Was With Her,” Nita Tyndall Surveys Queer Grief | Bitch Media

“Who I Was With Her” Explores Queer Grief and Loneliness 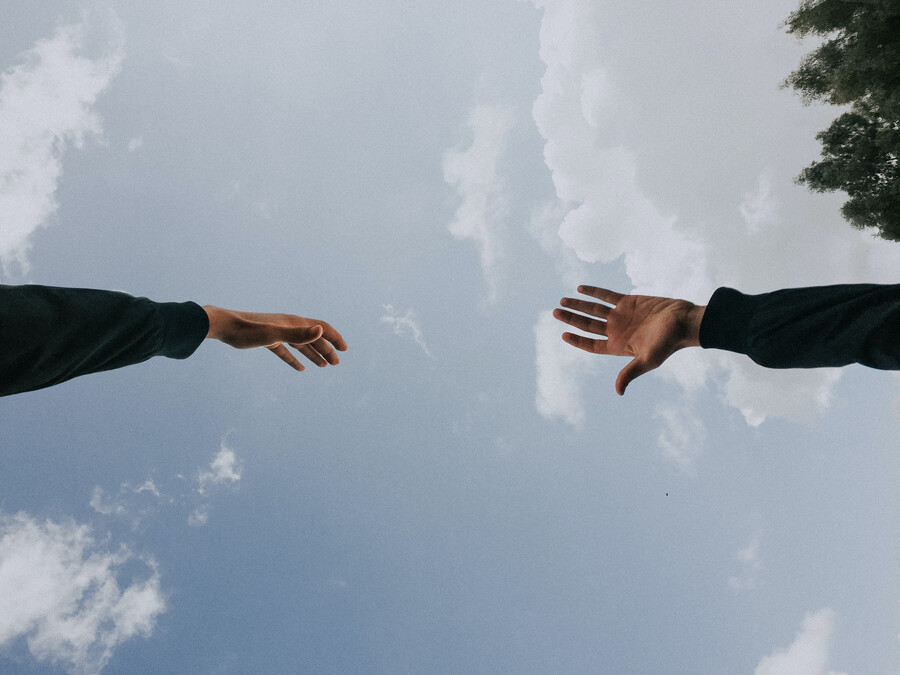 Nita Tyndall’s debut novel, Who I Was With Her, is the sort of quiet, introspective young-adult novel that thoughtfully captures the deep, overwhelming thoughts that come with grief, solitude, and secrecy. I had to take breaks while reading it, as it caused memories of my own coming-out experience, and the spiral it caused, to swell to the surface. The novel details Corinne Parker’s pain: She’s dealing with the fallout from the death of Maggie Bailey, the warm, bubbly girl she met through cross-country running. They were both runners on competing teams; Maggie was the star, the golden girl, and the one Corinne could never quite catch up to. But Maggie was drawn to Corinne, and, ultimately, they fell in love—and then, Maggie died. And Maggie’s death isn’t even the gut-punch. What escalates Corinne’s trauma is that no one knows about their relationship.

It’s in that story where we find our high stakes, and the tension that buoys the narrative. Who I Was With Her tells Corinne and Maggie’s story, and, eventually just Corinne’s, through short chapters. The chapters bounce between time periods, with some in the past—with titles such as “One Year Before” and “Seven Months Before”—and others in the present—“One Day Gone” or “Four Days Gone.” This structure shows the way that Corinne’s mind works, and how time revolves around Maggies’s existence, or lack thereof: How long has she been gone? How long ago was the before? Maggie also exists in the physical world via her relationships and her prized possession: a bright green scrunchie. “It smells like her,” Corinne notes. “This scrunchie smells like her shampoo and her perfume and race days and us. She thought it was lucky.”

This is what Corinne takes to remember Maggie by. One of my favorite twists is that, in losing Maggie, Corinne gains an unexpected connection: Maggie’s ex, Elissa, who is everything Corinne isn’t. She’s out and confident, drives a truck, and takes up space, proudly wearing rainbow gear and glitter on her public Instagram: “It’s strange to see her behind the wheel. Most of the people who drive pickups here are the boys at my high school, revving their engines in the parking lot like some show of whose dick is bigger.” Elissa has had girlfriends, plural, and she’s unashamed of it. She is very much herself in the same world in which Corinne rarely is. Rather, Corinne lies, hiding everything from the love of her life to her actual passions and interests from the world around her, even as her best friend worries about her, and her career as a runner hangs in the balance. But Maggie’s younger brother, who knew about Corinne, connects Corinne and Elissa.

In that connection we feel a new energy, one that goes beyond grief. It’s an energy that warms the pages. “She looks handsome,” Corinne thinks when Elissa picks her up for Maggie’s funeral. “That thought feels like a betrayal—thinking another girl looks handsome, let alone my girlfriend’s ex, let alone the ex who’s driving me to that same girlfriend’s funeral.” Reflecting on the moment, Corinne thinks, This is so fucked up. But, as Elissa says when she tells Corinne she lives with her ex, “It is what it is.” Queer people often find ourselves in surprising bubbles, realizing that our ex’s ex knows our girlfriend’s ex, or learning that our ex somehow met someone we hooked up with literally one time and that the pair discussed it. The plot point is a nod from an author in the know, a queer author who—through not entirely #OwnVoices, as Corinne is a cis bisexual girl and Tyndall is bisexual and nonbinary—understands that being queer can feel as much like a community as it can like being the only one.

Corinne might have herself convinced she’s the only one, but even in her small town she’s fallen for Maggie and met Elissa. She’s not as lonely, or alone, as she thought—or maybe even as she hoped. The introduction of Elissa is one that forces Corinne to question how much of her terror of leaving the closet is warranted, and how much of it is her holding herself back. How is it possible that these other queer people get to exist so openly in the same town where she feels so smothered with heteronormativity? Again, core to queerness and queer freedom is class. Similar themes are explored in Lindsay Sproul’s We Were Promised Spotlights and Leah Johnson’s You Should See Me in a Crown. We’re introduced to high-school seniors, all of whom are queer and largely closeted. For Sproul’s protagonist, Taylor, the lack of money and a safety net keeps her fluctuating between being a bold lesbian and the closeted popular kid whose entire life has been planned out for her in a small town.

For Johnson’s protagonist, Liz, landing a scholarship is the way out of her small Midwestern hometown and into a world where maybe she can find more people like herself. Running is supposed to be Corinne’s ticket out of the North Carolina town she lives in with her father, but she might not be a good enough runner. But she needs a scholarship to explore the world outside the one she’s always known. “That’s the other thing about this town,” Corinne thinks of coming out. “Everyone’s family knows everyone…how can I come out in an environment like that? Even if I only told one person? If that one person told her mom, then everyone would know, and that thought terrifies me, even if I can’t put why into words.” It’s not that it’s impossible to be queer in a small town; Tyndall smartly and intentionally navigates the lines of presenting Corinne’s struggle to see the South as anything but backward with characters who prove that it’s anything but: But being a wealthy queer person means that you always know you have a safe spot. 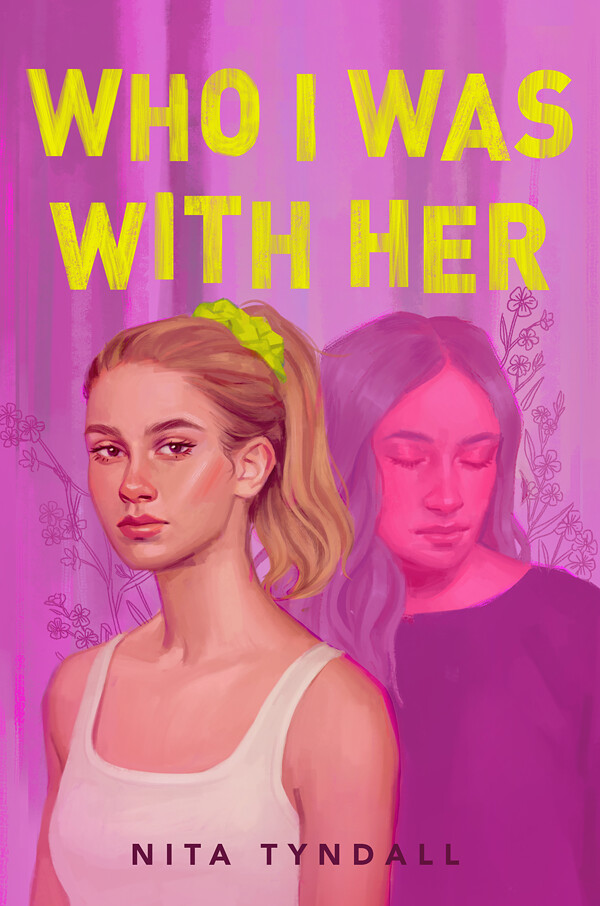 Who I Was with Her by Nita Tyndall (Photo credit: HarperTeen)

You can move, live alone, or hide. Elissa is financially stable enough that she was able to move out, and live with her at-the-time girlfriend. “It’ll be great. Big city, being out,” Maggie had dreamily offered to Corinne. Independence means freedom, and you can’t amass much independence without the money to back it up. One strong aspect of Who I Was With Her is the way that Tyndall explores biphobia. It’s a slow-building thing. As we see Corinne become more comfortable with her own sexuality, we see the people around her to seek to knock it. A teacher makes a joke about an element being bisexual, and an aquaintance makes a comment about girls kissing. “I am the girl who makes out with another girl at a party and discovers she likes it,” Corinne thinks, “and I will be eaten alive for that.” One of the most memorable moments is one where Corinne, coming down on a swing, announces out loud, “I’m bisexual,” after saying it to herself in the mirror over and over again, and trying to face it.

In Corinne, we find a young bisexual woman we can not only root for, but come to understand our own biases through. She’s not always a good friend, she lies to those who care about her, and she has a massive bias against the South and the people who inhabit her town. But she’s also traumatized, grieving, and trying to figure out who she is in a space where she doesn’t feel welcome or safe, while simultaneously feeling responsible for her parents, who are so wrapped up in their own lives they don’t see how badly she’s hurting. Who I Was With Her is a lesson in moving on and moving forward, even when we’re deeply terrified of the risks.