Who Hears the WhisperThe Shitty Media Men List Excludes So Many 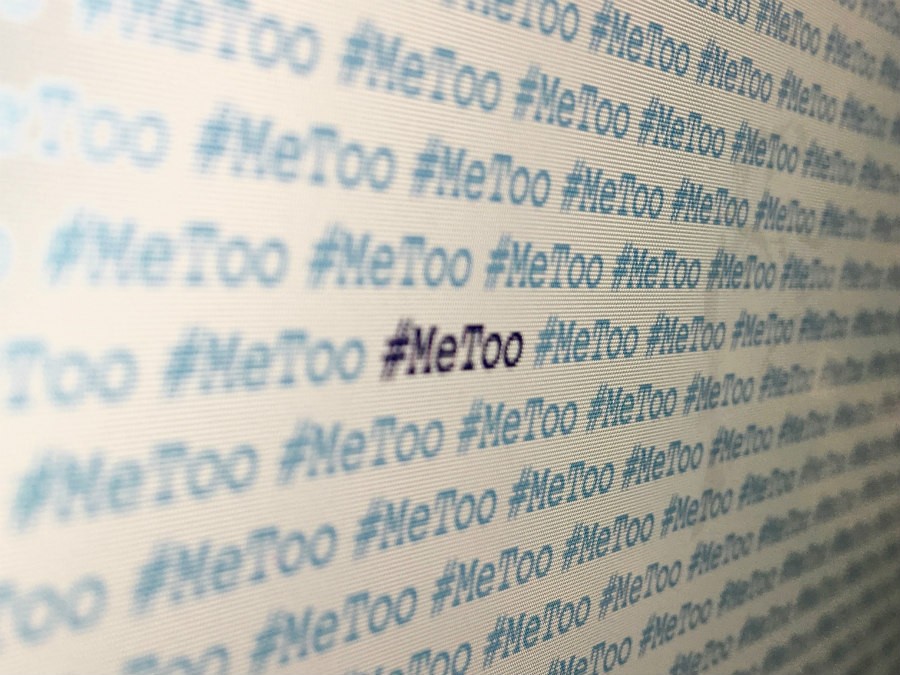 Though it was live for only a few hours in early October, the infamous Shitty Media Men list sparked another chapter in the ongoing conversation about sexual harassment and assault. In addition to becoming the groundwork for a veritable blizzard of hot takes (the list makes me feel funny, the list is bad, the list is flawed, the list is unfair), it highlighted media’s systemic culture of sexual harassment and assault. Along the way, it also brought up a complicated conversation around whisper networks and where they fail—and this is a timely moment to have that conversation since Moira Donegan has taken responsibility as the list’s architect after Katie Roiphe and Harper’s Magazine threatened to out her.

I first heard about the Shitty Media Men list when the news broke that it had briefly existed and then been deleted. Earlier in the day, an assortment of confusing, vague tweets suggested Something Had Gone Down in Media, but it was impossible to chase down an explanation. An editor made an offhand reference to a “list” when she explained why she was late with returning edits on a piece. No one sent me a link to the list. No one asked if I wanted to see it, or if I had seen it. While it was live, multiple people referenced it in a way that, in retrospect, suggested I knew about it and had seen it. Surely “everyone” had seen the list, right?

And then Doree Shafrir’s piece dropped on BuzzFeed, and all became clear. An intrepid anonymous author had set up a Google spreadsheet to document the cases of men in media with a history of sexual harassment or assault, and invited people to edit it. By the time Donegan took it down, in advance of the BuzzFeed piece, it included over 70 names, many of which had multiple entries. But, as with other whisper networks, the list was highly insular in nature. “The list was F.T.B.T.—for them, by them—meaning, by white women about their experiences with the white men who made up a majority of the names on it,” Jenna Wortham wrote in the New York Times. “Despite my working in New York media for 10 years, it was my first ‘whisper’ of any kind, a realization that felt almost as hurtful as reading the acts described on the list itself.” The Shitty Media Men list was very specifically written and circulated by a narrow subset of women in media: primarily white women at legacy publications in the New York media scene. There were, of course, exceptions. There are always exceptions. 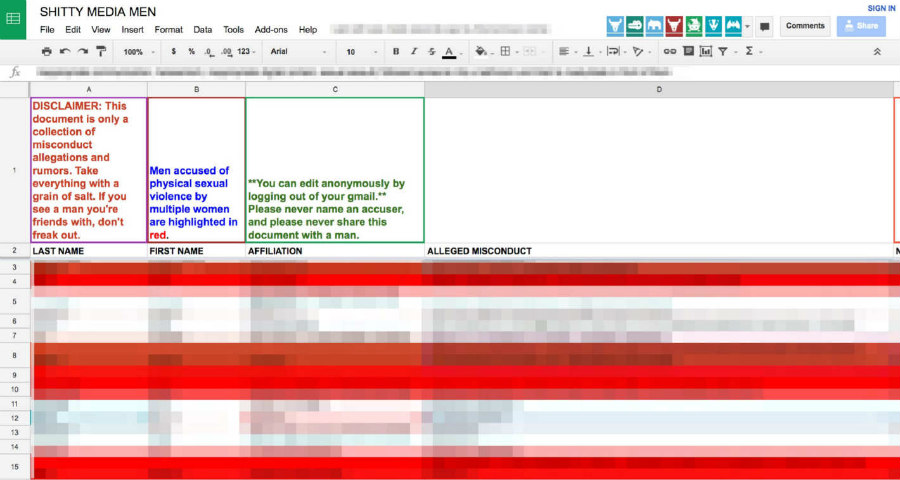 But it was a reminder of the tiers of power in media. As Wortham noted, women of color were left out of the discussion. Many freelancers of all genders, such as myself, were excluded from the list, a further reminder of our comparative exploitation and isolation. I undoubtedly work or worked with at least one of the editors on the list, and perhaps I’ll never know. People outside of New York were also excluded. As Bitch’s co-founder Andi Zeisler noted in her column on “loophole women,” up-and-comers in media without the social connections and support available to many women who participated in the list were similarly cut out.

If a whisper network highlights the power of a sisterhood, it also underscores the exclusionary nature of sisterhood (starting, perhaps, with the assumption that “sisterhood” adequately describes the systems of power and oppression in media or elsewhere). This is something many of us who are isolated from the insular bubble of the New York media scene feel acutely: We feel it when people drop casual comments about how “everyone knows” that a given publication or editor is bad to work with, when this network closes ranks around its own, when we find out that someone else is making a much higher rate than we are for similar work, and when opportunities in publishing, like columns, staff writer positions, and other plum jobs, are handed out. If anything, the list reinforced our outsider status and the fact that the duty of care for the “sisterhood” is provided only to a small number of women in positions of privilege.

Whisper networks can be incredibly powerful, but only when the signal carries throughout a community, not just among those who already occupy positions of comparative privilege. This partly depends on acknowledging that the media community does in fact extend beyond the boundaries of New York City, Chicago, D.C., and Los Angeles, and includes people beyond white men and women.

A truly inclusive whisper network could expose, for example, sexual harassers and rapists who specifically target vulnerable people who sit outside the connected media community because their isolation makes them easy prey. It could make tremendous strides in addressing wage disparities—the black boxification of compensation in media succeeds in part because no one talks about money, and because media companies rely on silence to offer radically lower pay to women and others in underrepresented groups. It could also expose people in power who engage in behaviors beyond misogyny, including racism, disablism, transphobia, homophobia, Islamophobia, and fat hatred.

A broad, inclusive, highly-distributed whisper network could develop the power to utterly disrupt media hegemony. This is, perhaps, something that’s a little scary to the “loophole women” who benefit from it even as it exploits them. This may explain why the reach of the whisper network fell so short in this case, because to admit that the toxic issues in media run far, far deeper than this set of women would require confronting some personal complicity. I see this at work when deeply transphobic editors are publicly praised by cis women as “great to work with” or when publications with a history of disablism are suggested as “inclusive” or when editors who’ve been openly (and privately) racist are put forward as good actors in “the community.”

The failures of the Shitty Media Men list in a way highlighted the fact that media is not a singular, cohesive community, and that our fragmented nature makes it much easier to exploit all of us. There are already whisper networks amidst numerous media communities, but there’s been a failure to unite them, and the Shitty Media Men list wasn’t the way to accomplish that goal. Perhaps the way to address the huge power imbalances and abuses in media lies not in whispering behind closed doors, but shouting from rooftops. If those with the most privilege called out the biggest abusers, others would be enabled to follow. It’s working for #MeToo, where the very public, sometimes messy, sometimes awkward conversation is still holding abusers accountable and resulting in tangible change. If we learned nothing else from 2017, it was that gathering lots of noisy people together has an impact—and that privileged people need to be willing to take a turn as shields in order to enable the voices of those with much less power.