Why I Can't Laugh Off Trump's Hateful Ideas | Bitch Media

Why I Can't Laugh Off Trump's Hateful Ideas 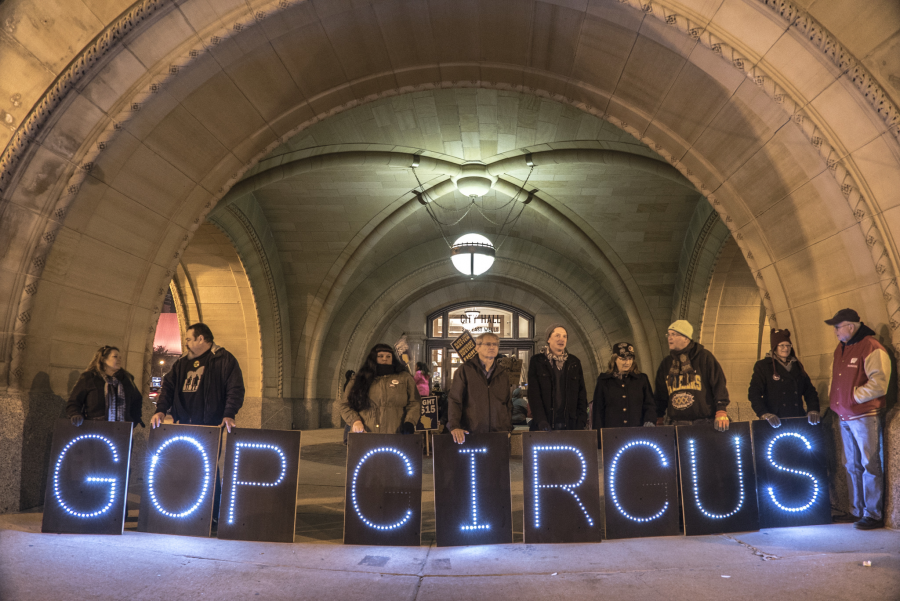 Just a few months ago, when a man with a sad little yellow toupee announced he would be running for president, most progressives and libertarians made a mockery out of it. We laughed it off like it was a joke. Donald J. Trump, the reality TV star and Obama Birther, could never become president or hold such influence. The Huffington Post even moved all coverage of him to their entertainment section. We didn’t take any of it seriously. And now, while he’s using his enormous platform as presidential candidate to propose heinous policies against Muslim-Americans, we’re wondering how this taunting old-American xenophobia has escalated to such a severe level.

Well, the answer lies within ourselves.

Trump’s rhetoric is so abhorrent and repulsive that we want to be able to laugh it off. But we shouldn’t: Trump’s hateful ideas are something we should take frighteningly seriously. As we laugh Trump off as a joke, his appalling rhetoric is sinking in for many Americans—for the kind of Americans who stage anti-Muslim rallies outside mosques. He pushes the needle of the mainstream political conversation to the right, making conservative candidates Marco Rubio and Jeb Bush look moderate and level-headed in comparison.

When Trump announced his proposal of a “complete and total shutdown” of Muslim immigration, some Muslim-American media personalities responded with humor—but the jokes often seem flat in the face of Trump’s threat. Journalist Wajahat Ali, for example, has done a great job in confronting Islamophobia in his years as a playwright and writer. However, his recent response to Trump’s statement, while critical, rests on problematic ideas. In a Facebook post, Ali asks Trump who would drive his Uber and operate the halal carts if there were a ban on all Muslims. This sort of response isn’t just damaging because it reinforces the stereotypes Muslim-Americans are faced with daily, but also because it underestimates the severity of Trump’s influence. A new poll shows that Republicans who think Muslims pose an “immediate threat to the United States” are more than 30 percent more supportive of Trump than Republicans who think Muslims are not a threat to the country. What’s most terrifying about Trump isn’t what he’s saying—it’s that people are listening.

While on CNN’s New Day, Trump defended his call to ban Muslims by saying:

“They want to build our buildings to come down; they want our cities to be crushed. They are living within our country. And many of them want to come from outside our country.”

The rhetoric Trump uses reinforces an “us versus them” mentality by saying Muslims as a whole want to destroy “our country”—implying that Muslims cannot ever truly be Americans. The whole notion of “Making America Great Again” is an aggressive attempt to hold on to something his supporters want America to be: a white majority. That’s different than what America has always been: a country of diversity. The notion of what is “white” has shifted more than the “diverse” makeup of the American public. Regardless, the false nostalgia of the Trump movement is rooted in the old-American xenophobia that haunted the American political landscape for much of the 19th and 20th centuries.

This is why Trump has vocal support from neo-Nazis and other white nationalists. But he also has support from more middle-of-the-road Americans. Here’s how RealClearPolitics describes the demographics of his supporters:

“In terms of demographics, Trump’s supporters are a bit older, less educated and earn less than the average Republican. Slightly over half are women. About half are between 45 and 64 years of age, with another 34 percent over 65 years old and less than 2 percent younger than 30.”

For these people, Trump’s hate speech about Muslims reinforces a narrative that Muslims are different than other Americans and not to be trusted. It’s the same type of tactic used to build the Birther movement. We’re dealing with people who glorify Trump for calling women misogynist slurs and Mexicans “rapists.” For heaven’s sake, we’re dealing with people who also admire politicians who don’t know the difference between an Islamic organization and a chickpea dip. But more importantly, it’s this type of rhetoric that fosters the spike in anti-Muslim hate crimes in the United States.

Sarah Harvard is a journalist based in Washington, D.C focusing on national security, civil liberties, and Islam.

I think this post is super interesting and is definitely needed. I love that you told us how people treating Trump as a joke is actually harmful to our society because of how many people are doing the opposite and taking his words seriously. Thanks for this post!

Relevant: The Overwhelming Whiteness of the Publishing Industry