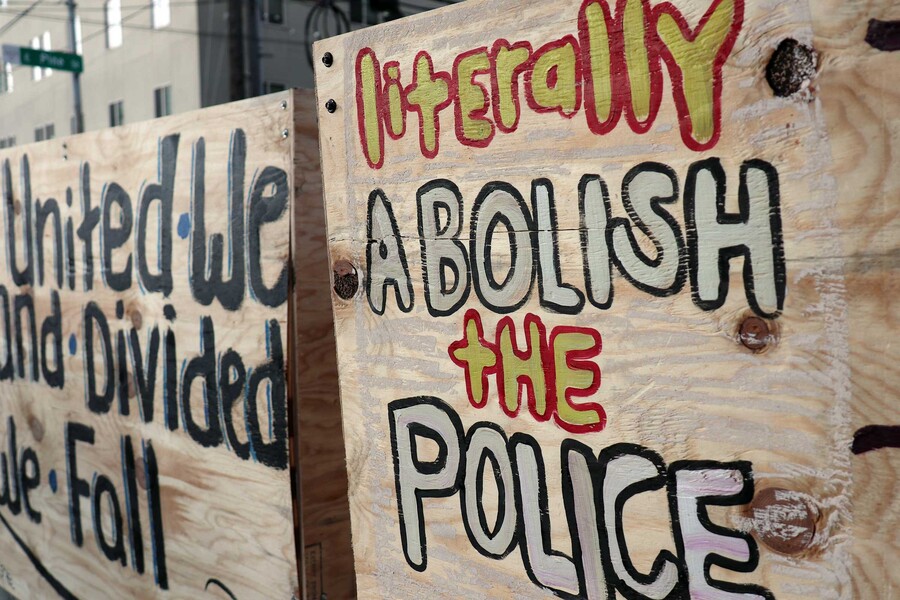 Graffiti on a barricade inside the so-called “Capitol Hill Autonomous Zone” call for the abolition of police. The area surrounding Seattle’s East Precinct police station, which last week Mayor Jenny Durkan ordered to be evacuated and surrendered to protesters, is operating as a semi-autonomous jurisdiction outside the control of state authorities. (Photo credit: Toby Scott/SOPA Images/LightRocket via Getty Images)

On August 11, after months of anticipation, Democratic presidential nominee Joe Biden announced his vice presidential pick: California Senator Kamala Harris. Reactions were mixed, ranging from excitement and disappointed resignation to outrage. Harris’s inclusion on the ticket is historic from a representational standpoint, but her political history, alongside Biden’s, is facing heavy scrutiny, particularly around mass incarceration and policing. Many liberal Democrats argue that voting for the Biden-Harris ticket is essential, regardless of a voter’s thoughts on the party nominees, and the line of thinking, broadly, is that a vote for Biden is a vote against Trump. By voting in Biden and Harris, liberals believe we will have the opportunity to push the administration further left and ultimately get closer to our goals.

But some leftists, notably non-white leftists, disagree. “A vote for Trump is a vote for Trump and Trump has pretty much confirmed that he will not allow this to be a legitimate election,” K, a Brooklyn-based abolitionist organizer (and one of the cofounders of 8 to Abolition alongside myself and eight others), told Bitch. “If Democrats didn’t want Trump to win they should have had a better strategy these four years.” Like K, many on the left are unwilling to accept that voting for the “lesser of two evils” is the best we could come up with after four years of Trump, especially when those who advocate so strongly for voting offer little explanation about how to push Biden to the left or how to hold the administration accountable.

These leftists, especially those who aren’t white, are viewed by pro-voting liberals as being moral purists or being complacent, but it’s important to reckon with the fact that non-white, leftist, non-voters are some of this country’s most engaged citizens, especially in terms of politics. They aren’t “doing nothing” to stop Trump—rather, they’re working to better our communities through other means like organizing, mutual aid, and direct action. Beyond voting, organizers are working to help jailed protestors and incarcerated people during national uprisings and a global pandemic at a time when Democratic governors refuse to decarcerate and Democratic mayors remain steadfast in their support of police. Tenants’ rights advocates have been protecting the rights of renters who are dealing with historic rates of unemployment, questionably illegal evictions, and no rent freezes. It’s not inaction; it’s just a different form of action than voting.

As an anarchist, Poss—who is a queer, nonbinary, white-passing, Mexican and mixed-Indigenous person—believes in direct action and mutual aid. “Direct action is the idea that you cut out the middleman…and defend your neighbors without relying on an outside force,” Poss said. “Mutual aid…is providing help to others without expectation of reciprocity but with the knowledge that we are all we have.” In practice, direct action can look like stopping an ICE detention by not allowing a van to leave with a neighbor inside or providing hand sanitizer to the homeless community in your area. Likewise, K spends their time making political change through abolitionist collectives they’re a part of and by engaging in political education around ending the prison-industrial complex. “[We] can find solutions to our problems outside of the electoral system through reading the work of revolutionaries, joining a group in your area, and making a commitment to do something to improve the world daily, instead of just once every four years,” K said.

As people all over the country (many of whom are organized by non-white leftists) continue to protest police violence—and are met with more police violence—the Democratic Party has put forth two candidates whose histories on policing are harmful at best, and deadly at worst. Biden coauthored the 1994 crime bill—a law that imposed stricter federal prison sentences, escalated the war on drugs (which, of course, most negatively impacted communities of color), and encouraged states to do the same. On the other hand, Harris rose to national recognition during her tenure as California’s attorney general or “top cop,” from 2011 to 2017, when she put trans women in men’s prisons and championed an anti-truancy law that caused parents to be arrested if their children missed school. K says that they “cannot in good conscience vote for the architect of the 1994 crime bill, and a prosecutor” because “these people are responsible for the incarceration of people I am actively working to free, and it would go against my principles to give them any ounce of support.”

Halimat, a queer Nigerian American, told Bitch that she’s choosing not to vote because she’s been “watching the Democrats reject all progressive policies” and “flagrantly reject the needs of our communities.” She says voting for and supporting more Democrats won’t get her closer to what she sees as best for her community because she says the party has consistently watered down the efforts of organizers, whether the focus is socialized healthcare or police defunding. “My community needs a radical redistribution of resources. Money needs to be invested in the people in the form of housing, food access, healthcare, and an end to policing. The Dems have given me murals. They’ve rejected Medicare For All—in a pandemic,” Halimat told Bitch. Rather than seeing it as her own rejection of the Democratic platform and candidates, she believes the decision to stack the presidential ticket with the likes of Biden and Harris was the party rejecting her. “They said, ‘We’re not offering what you want.’ That tells me they don’t want my vote,” she said.

Not voting isn’t always a sign of ignorance, despite the overwhelming number of articles and statements from politicians—”Don’t boo, vote”—that push this idea. Poss used to work in electoral organizing and “realized after a couple of cycles that despite wanting to engage in harm mitigation through the ballot, elections are expensive and harm our movements long-term. They sap power away from the streets the moment election day is over, regardless of the outcome. In addition, Democrats more or less spit in the face of the working class a number of times throughout this cycle, which has been a reminder that they do not hold our interests in mind even to potentially reduce harm.” Why would someone from a marginalized group vote for a party that hasn’t proven itself willing or capable of protecting you? Halimat and Poss are not alone in questioning how these two candidates reflect the current moment and needs of Americans—especially marginalized Americans.

For other leftist non-voters, it’s not just about these specific candidates or this specific election, but about the foundation of the entire country. The United States is a settler-colonial project built on stolen Indigenous land by enslaved Black people who were kidnapped from their homelands. The country has yet to engage with this legacy in any meaningful way; the United States has not addressed the harm of colonizing and desecrating the sacred lands of Indigenous people nor have they provided reparations for the enslavement of Black people. Da’Shaun Harrison, a trans author, editor, and community organizer, has never voted and doesn’t ever plan to because they see presidential elections as a useless endeavor that “legitimizes an illegitimate office built on stolen land forged by stolen people.” Harrison argues that the United States’ “very existence is predicated on anti-Blackness” and to vote would be participating in their “own demise.” To them, the law, the president, and the U.S. empire can’t protect Black people—including those abroad.

They aren’t “doing nothing” to stop Trump—rather, they’re working to better our communities through other means like organizing, mutual aid, and direct action.

So what do we make of the amount of resources being used to encourage voting Democrat, period? Ronak Sathyanarayana, a 19-year-old ecosocialist, said that calls to “Vote Blue No Matter Who” are “liberal guilt strategies that simply don’t work.” He argues that if Democrats truly were intent on winning the election, “they wouldn’t be guilting people to vote, and, ultimately, alienating these non-voters from the party; the solution would rather be listening and trying to find a compromise.” To those who try to guilt him into voting, Sathyanarayana retorts, “I’d say it’s not my job to prove myself to the party, but rather the party’s job to win over our trust through dutiful public service. By putting no effort into compromising between leftists and liberals, they’ve made their stance clear.” He points to watering down calls to abolish ICE, some Democrats’ support of police unions, and Biden’s opposition to legalizing marijuana.

The rejection and alienation of the more progressive wing of the Democratic Party that supports these policies suggests that the establishment remains steadfast in their attempts to win over moderate independents and those who voted for Trump in 2016, rather than accepting that the largest share of Democrative voters are self-described as “liberal” or “very liberal.” The disenchantment non-white leftists feel with all parties did not happen overnight—it was the result of proven ineffectiveness. The government is not and has not been doing the work to protect marginalized people and help their communities flourish. So, they’ve taken things into their own hands. Organizers who are prioritizing marginalized people’s well-being should not be shamed, whether they are voting or not; in fact, they should be supported in their endeavors. Harrison does this work because they “believe that freedom comes from the power wielded only by the People and cannot come through asking permission from elected officials.” Harrison and others on the left are working to ensure their communities have what they need to thrive—and they don’t need voting evangelists’ approval to do so.