We Were Rooting for YouOn the Changing Legacy of Tyra Banks 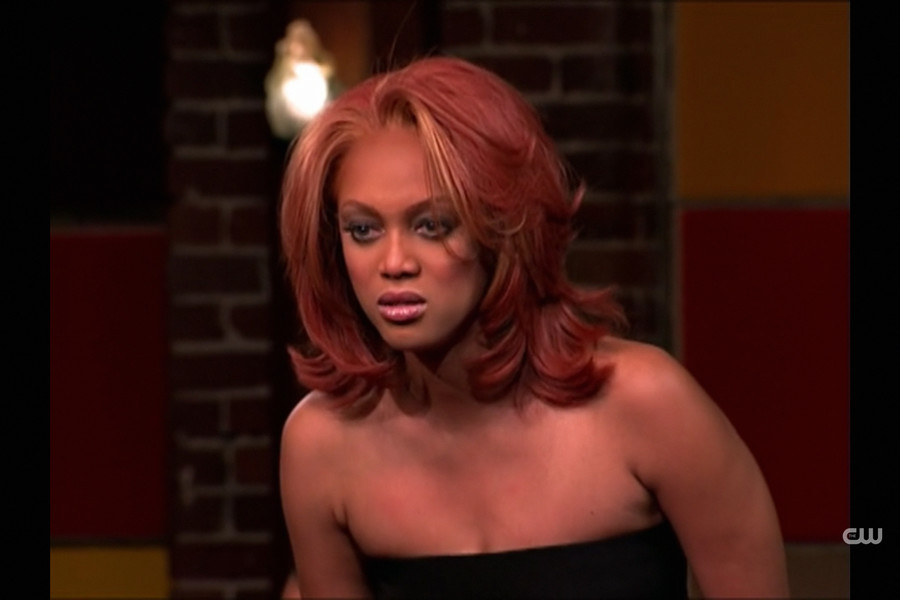 In the early 2000s, Tyra Banks was considered both a modeling icon and a role model. She was already a top-earning model, the first Black woman to grace the cover of GQ and the Sports Illustrated Swimsuit Issue, and a Victoria’s Secret Angel from 1997 to 2005, before the brand destroyed itself by excluding fat and trans models from its coveted runway. Banks had such an outsized impact that she snagged three book deals for Tyra’s Beauty Inside Out (1998), Modelland (2001), a (poorly rated) young-adult novel, and Perfect Is Boring: 10 Things My Crazy, Fierce Mama Taught Me about Beauty, Booty, and Being a Boss (2018), an autobiography that features advice from Banks and her mother Carolyn. She also helmed America’s Next Top Model, the first reality TV competition for models, across multiple seasons and networks, costarred in Disney’s 2000 film Life-Size, and hosted her own syndicated talk show. Banks sat near the top of the fashion world—both of it and transcending it—telling the New York Times in 2019, “I was told ‘no’ all the time because of my skin color or because I was too curvy or a size six. I wanted to break down these barriers.”

She did just that. Banks has long been perceived as a force to be reckoned with, a woman whose career is worth admiring and attempting to emulate. As a teenager, I wondered how I could be more like Banks—smize as well as she does, hold my own the way she always seemed to—even as she confronted Naomi Campbell about alleged bullying—and bring unwavering confidence into every room I walked in. But now, Banks is in the crossfire of the internet’s ire as people grapple with her actual legacy. Recently, Twitter users dug up videos of Banks dragging multiple contestants on America’s Next Top Model, including contestant Tiffany Richardson, who was the subject of an unforgettable Season 4 episode titled “The Girl Who Pushes Tyra Over the Edge.” Throughout that episode, Banks and her fellow judges thought Richardson wasn’t giving her all to the competition, so they decided to eliminate both Richardson and another contestant. Axing her from the show wasn’t enough though; Banks also had to teach her a lesson.

When Richardson tried to defend herself, Banks literally screamed, “Be quiet, Tiffany. Be quiet! What is wrong with you? STOP IT. I have never in my life yelled at a girl like this. When my mother yells like this it’s because she loves me.” And then Banks shouted a line that has become more iconic as time has passed: “I was rooting for you! We were all rooting for you.” It’s a de facto Banks catchphrase now that’s also become a popular meme, gif, and a favorite for merch creators. When she looked back on the moment in 2017, Banks told BuzzFeed that she wishes she hadn’t said those words on television: “Oh my god totally, I wouldn’t have done it. Actually, maybe I wouldn’t have aired it.” She also said that she felt she was preparing Richardson for the realities of the modeling world. “It can be very harsh, but the real industry is harsher.”

Richardson has also reflected on that moment, telling BuzzFeed that she knows now how human Banks is. “I went into it thinking Tyra was fucking God….To actually see her and the vibe is completely different. It was just weird.” While Banks thought she was being loving toward Richardson, in hindsight, their interaction came across as a woman in a powerful position using said power to destroy the confidence of another Black woman. It didn’t feel like love; it felt cruel. But in our cultural consciousness during the time of the episode, and in our memory, it felt like little more than a joke, as many moments of reality television do. In the context of a reality show, it’s easier for viewers to laugh off something harmful than to really engage with it as we’re doing more than a decade later.

Though the “we were all rooting for you moment” is emblazoned in our brains, it’s not the only time Banks targeted Black models, in particular, on ANTM. Twitter user @moneymakinmuva and others have been chronicling many of ANTM’s most problematic moments, including a white model being photographed in Blackface and a clip of Banks mocking Dani Evans, a cycle six contestant, for refusing to cosmetically close the gap between her two front teeth. We’ve known for a long time that Banks made several mistakes on ANTM. In fact, media critic Jennifer L. Pozner (who has contributed to Bitch) wrote in her 2010 book Reality Bites Back: The Troubling Truth About Guilty Pleasure TV, that “America’s Next Top Model is a perfect case study of how violent imagery plays out in the reality TV landscape.”

She wrote about the show’s sadism, which “pioneered a whole new standard of placing women in danger, sometimes imaginary and sometimes all too real,” and made pain a “basis upon which the girls were judged, in contests requiring the women to repeatedly fall from platforms and crash onto barely padded surfaces, recline in bikinis on ice sculptures in frigid rooms, and so on.” But such feminist statements weren’t as readily palatable in 2010, and it was easier for consumers to continue to watch mainstream, racist, fatphobic content than to find spaces that encouraged analysis and questioning of their everyday pop culture consumption. Our reaction to these unearthed ANTM clips says much more about our changing cultural consciousness, especially regarding beauty, than it does about how we regard Banks as a cultural figure

Tyra Banks has been around since the ’90s, but it has taken this long to reckon with her true legacy.

In the early 2000s, the fashion industry limited representation to very thin, very white girls and women who were overly Photoshopped. Teen Vogue wasn’t the “voice of the resistance;” it was just another teen publication shilling graphic tees and trying to make teen girls feel bad enough about their zits to shop from their advertisers. Brands had yet to realize that inclusivity was a money-maker, and body positivity was still a radical phrase making its way only through niche circles. There was no social media as its exists now and consumers didn’t have such easy ways to ask for more from their favorite television shows or icons. There was no “Aerie Real” campaign and Dove’s “Real Beauty” campaign was in its infancy. Banks herself was a game-changer because she wasn’t a size zero white woman, something that, today, we view as more of a norm than something radical. Our beauty standards, themselves, are evolving because we know more now than we did in Banks’s prime.

Banks isn’t a monster who harmed women because it pleased her; that’s what the modeling industry of that time told women was necessary to succeed. They would be abused, berated, starved, and forced to fit into narrow beauty ideals or they wouldn’t walk runways, be cast in magazine editorials, or elevate to supermodel status. Banks has been around since the ’90s, but it has taken this long to reckon with her true legacy because it has taken this long to understand the fashion industry’s classism, racism, and fatphobia. It has taken us this long to realize an industry built on exclusion will certainly produce abuse. Our urgent desire to quote-tweet videos of her spouting hate at aspiring models feels almost like my instinct to delete a shameful Facebook post from 2005 or to shred a diary entry that unfairly shames another woman.

Our knee-jerk reaction to Banks is really us recognizing our own changing consciousness. Change is good, but it also forces us to recognize what we used to support and understand as truth. In a May 8 tweet, Banks wrote, “Been seeing the posts about the insensitivity of some past ANTM moments and I agree with you. Looking back, those were some really off choices. Appreciate your honest feedback and am sending so much love and virtual hugs.” We’re looking back too and we don’t like what we see. Yes, Banks paved many paths for other models, especially women of color and women who didn’t fit the hyper-thin ideal of the ’90s, but her legacy also includes a show that denigrated Black women who aspired to walk in her same footsteps. Maybe we’ve grown beyond thoughtless rewatches of ANTM and are looking for something a little more aware of the fashion industry’s pitfalls and a little less inclined to mock Black women for the sake of entertainment.

Read this Next: The 99%: "Talk like a Cover Girl" and the Classing of Voice on America's Next Top Model