The NBA, WNBA, and MLB Remind Us That Strikes Are an Effective Tool | Bitch Media 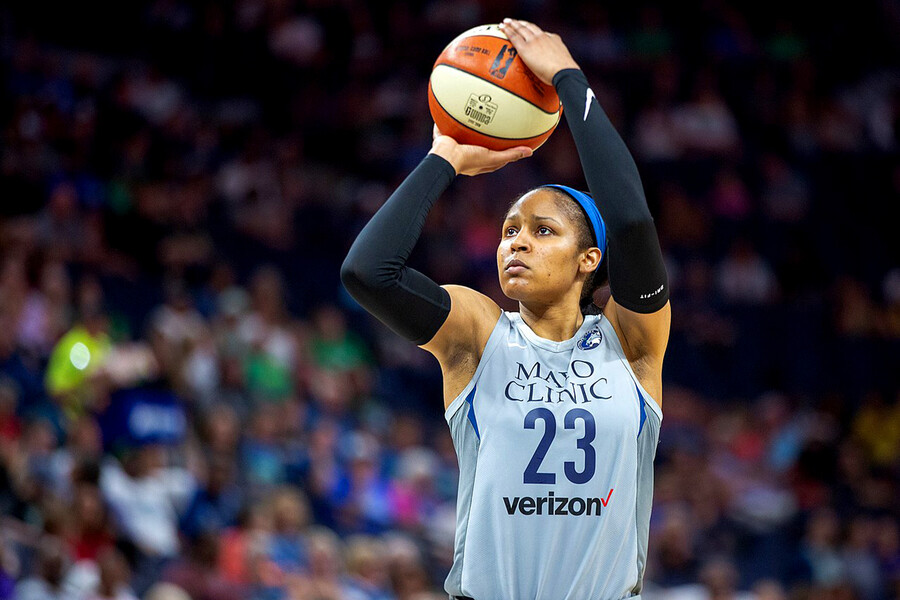 Maya Moore had support of her team as she left the WNBA to focus on criminal-justice reform. (Photo credit: Lorie Shaull/Creative Commons)

The court in the NBA bubble was empty on August 26. As tip-off time grew closer, it became clear that the Milwaukee Bucks and Orlando Magic wouldn’t be playing Game 5 of their playoff matchup that night. Instead, shooting guard George Hill and his Bucks teammates gathered to read a statement saying, in part, that the recent shooting of Jacob Blake in Wisconsin was a clear indication that their “focus could not be on basketball” that night. Soon, the remaining teams in the bubble joined with the Bucks in refusing to play. From there, momentum began to build. The WNBA, already leaders in the athletic fight for social justice, unsurprisingly stood in solidarity with the NBA; more unexpectedly, Major League Baseball, the National Hockey League, and Major League Soccer followed suit, calling off a number of games to protest Blake’s shooting. The strike even hit professional tennis when Naomi Osaka, the highest-paid female athlete in the world, withdrew from the semifinals of the Western & Southern Open, prompting the entire tournament to postpone play for the night.

Despite spin efforts from leagues and broadcast networks labeling this a “boycott,” it was a wildcat strike—the athletes’ collective refusal to play was a refusal to work. While a boycott is a consumptive act of resistance, a strike is an action grounded in labor resistance. And while this iteration and scope of athletic activism is new, the Black athletes leading it are drawing from a much larger history of refusal. In 1958, high jumper Rose Robinson was named to the National Women’s Track and Field Team, a predominantly Black team that was scheduled to compete in the Soviet Union as part of the U.S. State Department’s Cold War efforts. It was a propaganda strategy aimed at using Black athletes and artists to demonstrate the supposed harmony of multiracial liberalism and capitalist democracy. Robinson, however, wasn’t up for the games: She refused to compete, telling reporters that she had “no interest in being used as a political pawn.”

A decade later, sociologist Dr. Harry Edwards echoed this sentiment before a group of aspiring Black Olympians who were considering staying home from the upcoming games in Mexico City. “For years we have participated in the Olympic Games, carrying the U.S. on our backs with our victories, and race relations are worse now than ever. Now they are even shooting people in the streets,” Edwards explained. Edwards, a former collegiate athlete, had started the Olympic Project for Human Rights in 1967 to help unite athletes who were beginning to interrogate global injustice, power structures, and the United States’ exploitation of Black athletes to burnish its own image. “It’s time for the Black people to stand up as men and women and refuse to be utilized as performing animals for a little extra dog food,” Edwards said. The athletes he addressed put refusal on the table. They tossed it around, tried it on, chewed on it. And some of what their efforts revealed—and continues to reveal today—is how difficult collective resistance can be, how hard it is to get everyone to commit to and assume the risk of standing up and saying no.

Some of 1968’s would-be Olympics competitors, like sprinter Lee Evans, were staunchly in favor of refusing to run; others, like world record–holding long jumper Ralph Boston, expressed reservations. (“I’ve put too much time and effort into track and field to give it up,” Boston said.) Other Black Olympic hopefuls weren’t there to voice their opinion either way, and female athletes hadn’t been included in any discussion about a proposed collective action. As the games drew closer and certain gains were achieved—namely the successful multination boycott of apartheid-era South Africa’s participation—the budding labor resistance dissolved. But individual Black athletes still found ways to refuse. Lew Alcindor, who we now know as  Kareem Abdul-Jabbar, decided not to try out for the Olympic basketball team. Track-and-field competitors Tommie Smith and John Carlos, meanwhile, used their hypervisibility on the world stage to protest, famously bowing their heads and raising their fists on the medal podium—refusing to let their victory be claimed by a country that didn’t love them wholly or treat them fairly.

From Toni Smith Thompson and Mahmoud Abdul-Rauf to Colin Kaepernick and Gwen Berry, the refusal to pledge to a paradoxical flag has been one of the most visible kinds of athletic activism. The 1968 Olympics were just a glimpse into the overall limits and potential of collective refusal among athletes of that time. After the assassination of Reverend Dr. Martin Luther King Jr. that same year, MLB was the only sporting body that didn’t change its schedule in recognition of his funeral—and a national day of mourning. Players including Roberto Clemente and Maury Wills of the Pittsburgh Pirates refused to play, prompting a league-wide postponement of Opening Day—and revealing  a growing shift in power. As league demographics shifted in the late 20th century, Black athletic labor became the driving force in many professional sports leagues. In that sense, it’s not surprising that the Blackest leagues—WNBA and NBA—have been most effective in drawing on collective power.

In 2014, for instance, the Los Angeles Clippers—a largely Black team, with a Black head coach—refused to play until the team’s overtly racist owner, Donald Sterling, sold it. But Black stars in predominantly white sports have demonstrated the constraints of individual refusal. After experiencing racist abuse at 2001’s Indian Wells Masters, Serena and Venus Williams refused to play the tournament again. Though the World Tennis Association made Indian Wells a required major tournament, the sisters continued to refuse for 15 and 16 years, respectively. But absent a collective action, the tournament remains a mandatory one and the Williams sisters now play in it again. In moments of collective refusal, however, we see what’s possible. Earlier this summer, Black pro softball player Kiki Stokes discovered that her general manager had tweeted a photo of the team to Trump with the caption “Everyone respecting the FLAG!” and, when confronted by the players, substituted all-lives-matter rhetoric for an apology to the team. Stokes decided that she would no longer play for that team or that general manager.

The recent sporting strike reminds us that athletes are workers and that labor resistance is a key tool for Black liberation.

Had she walked out alone, her career might have been over, but her white teammates joined her in walking out; together, the players formed their own pro team called This is Us Softball. A few days later, the 18 players took the field in black jerseys that each carried the name of a Black softballer on its back. And we have seen more flashes of the possible since then. August 26 offered a glimpse of what the hypervisibility of athletes in revolt could inspire. Though play resumed two days later, the NBA committed to turning arenas into polling places and announced the formation of a social-justice coalition in response to the player’s demands. The WNBA, which had already formed a social-justice council earlier in the summer, doubled down on their efforts. But does a return to work necessarily mean an end of refusal? For some it may feel that way, especially as the announced programmatic responses—such as Miami’s Heats partnership with Miami-Dade Police Department—seem to undercut their actions. But there’s also a discussion to be had about the forms and ways of refusal.

In 2019, a special issue of Women and Performance: A Journal of Feminist Theory titled “Performing Refusal/Refusing to Perform,” addressed this “double variance”: Withholding labor is a very clear visible refusal, but performing refusal can also be subtler, disruptive not in its action but in its subversion—in bucking expectations and challenging the status quo. In this context, the WNBA’s long history of engagement has helped set a blueprint for collective action by athletes. From individual players like Maya Moore, who had support of her team as she left the league to focus on criminal-justice reform, to teams like the Minnesota Lynx refusing to change their shirts that remembered Philando Castile, even as the league threatened to fine them, the WNBA is demonstrating the impact of collective action. The fruits of the league’s efforts can be seen in Moore’s success in freeing the wrongfully incarcerated Jonathan Irons, in the league wide contributions to the Breonna Taylor Foundation, and in the “Take a Seat, Take a Stand” initiative, which sent proceeds from the league to partner organizations doing social-justice work. Women’s sports, by their very existence, have always been political, but every time the WNBA takes the court, they’re refusing to cede the powerful platform they’ve built.

Tina Campt, a modern culture and media professor at Brown University, writes in her 2019 essay “Black Visuality and the Practice of Refusal” that “A silent portrait of any black woman is categorically unbearable. Our refusal of words is inevitably embraced as an invitation to impose a narrative that we have neither authored nor authorized.” The WNBA’s in a constant state of refusal, writing their own narrative, taking up space, and refusing to be satisfied with the crumbs society wants to hand them. The recent sporting strike reminds us that athletes are workers and that labor resistance is a key tool for Black liberation. But they also demonstrate that the work that comes after refusal is just as important, lest it be co-opted and commodified, or used as a shield to prevent, delay, and disrupt future resistance. For now, most athletes are returning to play, but they’re also refusing to be silent entertainers. The strike itself may have been brief, but it opened a new path and demonstrated the power in collective action—and as Boston Celtics shooting guard Jaylen Brown reminded reporters “if it’s necessary, it could be done again.”

Read this Next: All of the Work, None of the Credit 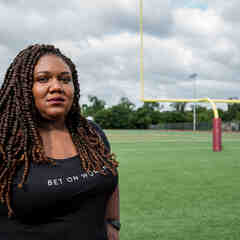 Amira Rose Davis is an Assistant Professor of History and African American Studies at Penn State and the Co-host of the feminist sports podcast, Burn it All Down.