Dicks in a BoxThe Enduring Fear of Penis-Snatching Witches 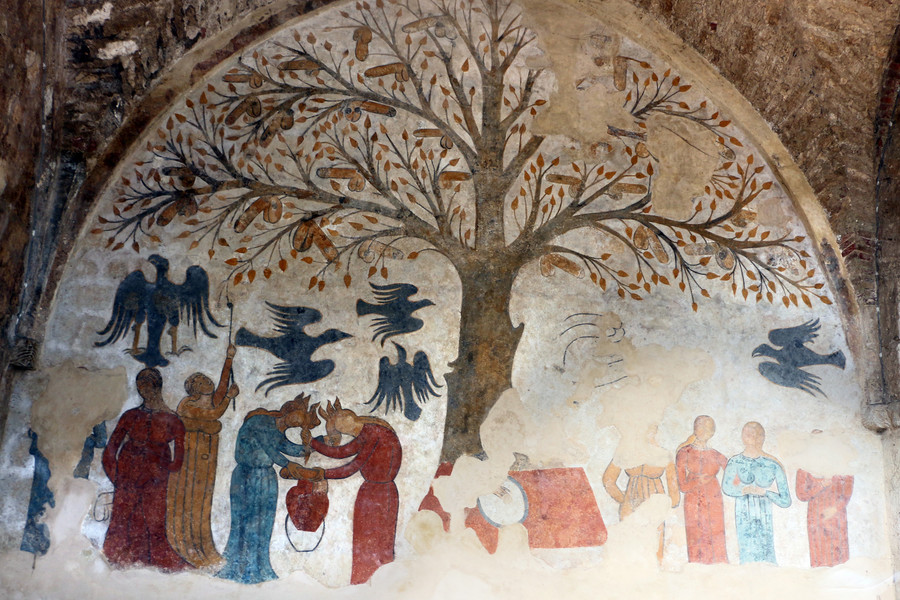 I imagine a world in which tomorrow, on the only holiday that matters, I group-FaceTime my friends and ask what we’re doing tonight. And one of them, clad in a bright-orange wig and six-inch heels, answers, We’re doing that thing where we steal men’s dicks and make them our pets. I proceed to drench myself in glitter and bring whiskey. And though this isn’t exactly how I’ll be celebrating Halloween, we can rewind a few centuries to a time when many people assumed this was, in fact, a thing women did—not only on Halloween, but most days of the year.

According to the Malleus Maleficarum, German author Heinrich Kramer’s 1486 manual for hunting witches (or, as we call it now, hunting women), witches could steal, transform, or conceal a man’s penis, and would often keep the detached body part as a pet. Indeed, as stated in Malleus Part II, Question 1, Chapter 7, “Sometimes [witches] collect male organs in great numbers, as many as twenty or thirty members together, and put them in a bird’s nest, or shut them up in a box, where they move themselves like living members, and eat oats and corn, as has been seen by many and is a matter of common report.”

According to historian H.R. Trevor-Roper, 14th-century Europe rarely witnessed persecutions for witchcraft. But following the publication of the Malleus Maleficarum, what had once been viewed as no more than a petty crime became punishable by torture and death as a deep fear of real and dangerous witches spread throughout Europe. The 16th and 17th centuries welcomed insatiable and violent witch-hunting, and only relented with the arrival of the Enlightenment in the 18th century: A shift in the general consciousness toward rationalism was, for obvious reasons, tough on witch hunters.

While containing no academic, scientific, or historical backing, the Malleus Maleficarum was widely regarded as truth, and became a how-to guide responsible for the murder of many women accused of witchcraft. The guide, however, is clearly a fear-ridden manifesto that, in a time of religious upheaval and power struggles, gave men license to belittle and abuse women who appeared at all empowered, autonomous, or sexually liberated. Witches were said to have been “seduced” by the Devil, and acting as an extension of Satan’s evil. “Many of the crimes (maleficia) attributed to witches concerned sexuality: copulation with incubus devils, procuring abortions, causing sterility and stillbirth, and impeding sexual relations between husbands and wives,” writes Moira Smith in a 2002 paper published in the Journal of Folklore Research and titled “The Flying Phallus and the Laughing Inquisitor: Penis Theft in the Malleus Maleficarum.”

Castration anxiety, a term coined by Sigmund Freud to describe men’s fear of literally or figuratively losing their penis—and thus their masculinity—is the unidentified main character in this fantastical story about penis-stealing witches. The Malleus Maleficarum essentially incriminated all women in a bloodthirsty quest to capture men’s penises: “All witchcraft comes from carnal lust, which in women is insatiable,” the manual reads. Watch out guys, Kramer calls, wearing what I imagine to be a 15th-century backwards baseball cap. They’re coming for you.

The fear of losing one’s penis in, say, an unlucky car accident or in the closing of an elevator, is vastly different than the fear that preoccupies Kramer more than others. As he writes in Chapter 7 (title: “How, as it were, they Deprive Man of his Virile Member”) men’s penises “are hidden by the devil through some prestidigitory art so that they can be neither seen nor felt. And this is proved by the authorities and by argument;…For since the devil has power over inferior things, except only the soul, therefore he is able to effect certain changes in those things, when God allows, so that things appear to be otherwise than they are.” Described here is a fear of losing power, of being stripped of the very thing that defines a man’s masculine existence, his strength and his dominance. Even worse: The penis is stolen and domesticated by a woman who has ceded her place in the social hierarchy in order to do the work of the Devil.

If witch hunters believed that a clitoral orgasm was the Devil’s work—the twitches, the screams—I can’t blame them; I would too if I didn’t know what it was.

Though the witch hunts of the 16th and 17th centuries have recently been attributed to economics—a 2018 paper proposed that competition between the Catholic church and the newer Protestant one made protection from witchcraft a proving ground—the lore of penis-stealing witches itself was rooted in patriarchy’s resistance to changes in the social order and its equation of female autonomy with evil. The witch trials across Europe were, despite minor differences from country to country, all animated by the same fear, with the same solution: Accuse emboldened, sexually active, queer, trans, uninterested, or upset women of Devil-ish associations and suddenly those “problems” are easily “fixed” by violence or death.

The later American witch trials actually erupted once European women-hunting was on the wane: Importing the fear of rampant witchery to the “New World” prepped the colonized land for the Western religious culture (and violence) that was to come. According to Kramer, once a witch was caught, her body was to be searched for a “little lump of flesh” in her most secretive place. He—along with other pseudo-scientists—claimed this lump to be “the devil’s teat,” the point of connection between the witch and the Devil that compelled and controlled her. With this claim, these men took another one of ours prisoner: the clitoris. Now, it comes as no surprise to me that these men had never located the clitoris before, and I imagine they weren’t necessarily known for asking their lovers, Did you come?  If they believed that a clitoral orgasm was the Devil’s work—the twitches, the screams—I can’t blame them; I would too if I didn’t know what it was.

The otherworldliness of the clit’s abilities terrified them, and the subsequent religious and “medical” obsession with controlling and even destroying it hasn’t yet left us. A 2018 Haaratz piece on this obsession noted that, in the 16th century, genital mutilation “was cited by the French physician Jacques Dalechamps, who believed that the clitoris was “an unusual feature that occurred in almost all Egyptian women… it erects like a male penis and indeed they use it to play with other women, as their husbands would do… Thus the parts are cut.” Fast forward to the present, where, according to the World Health Organization, more than 200 million people have undergone female genital mutilation, and roughly 3 million girls are at risk of undergoing the grisly custom each year. And the reasoning that drives this violence remains fairly unchanged from centuries past.

Women’s sexual pleasure and autonomy has long been the target of patriarchal control. From cultural shaming of the sexually active and so-called impure woman to widespread clitoral mutilation to violence against sex workers and the LGBTQ community, there remains a relentless preoccupation with ensuring women don’t have sex how they want, when they want, and with whom they want. The persistent male belief that gender equality is a zero-sum game commands that the elevation of women must result in the demise of men; that when women are liberated, men become imprisoned. Controlling women’s sexual pleasure controls our autonomy, freedom, and happiness preserves the same pillars of a binary male dominance on which the Malleus Malleficarum was written: good vs. evil, man vs. woman, God vs. Devil.

To begin breaking the pillars is to set our stage for liberation. Essentially, I do believe we should measure national population averages of happiness and growth by the sheer number of scream-inducing clit orgasms. The simultaneously cartoonish and wondrous imagery of penis-snatching witches gives us a historical, and perhaps palatable, lens with which to look at our world today. Cultural anxiety about maintaining traditional masculinity continues to identify “penis-stealers,” only now they are not only witches but sexual-assault survivors, transgender activists, or simply a society that is “feminizing” and “weakening” America’s men.

Women continue to be sexually demonized by politicians and pundits who seek to control women’s bodies and to punish them for asserting their autonomy. And of course, we read the phrase “witch hunt” constantly in the news, in large part because a man known for his disturbing misogyny has co-opted the historically gendered phrase and flipped it to complain that his own outsized power is being challenged by people he sees as beneath him: women, people of color, queer people. As these historically marginalized and victimized communities slowly but continually rise to political and institutional positions of strength, the pushback from those in power becomes stronger and increasingly outlandish.

So, once a year, on our dear Satan’s holiday, I celebrate the penis stealers, and return to this now-irrational folklore to draw attention to what hasn’t changed since the 1400s: We now face a less irrational but equally fearful male anxiety about the impending arrival of gender equality. One of my favorite images of anti-witch propaganda is a medieval Italian fresco that depicts women gathered around a marvelous tree whose draping leaves are decorated in lonesome, unmoored penises. One woman appears to poke at a branch with a stick, perhaps eager to score the ripest fruit for herself. These morbidly evil, clit-having, oat-feeding women hanging around the dick tree are, to me, reminders of the power found in community—a power that has been terrifying throughout the centuries, from Heinrich Kramer to Donald Trump and millions of men in between.

Best of all, thanks to the cultural repurposing of the penis stealers in contemporary feminist media, witchy myths that were meant to alarm men into literally hunting down women are now, honestly, a vibe. As the spookiest night approaches, I will put on too much makeup, gleefully apply glitter, and tell my friends they look hot to the sound of Kim Petras playing in the background. And I’ll imagine what we might look like dancing around a wild, plentiful, fuck-the-patriarchy dick tree, unleashing the devils in our clits and reveling in the fleeting possibility that achieving equality, safety, and lots of great sex might actually be this easy.

Read this Next: What 17th Century Witch Burnings Teach Us About Evangelical Extremism 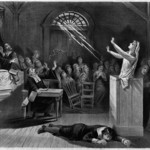 by Ann Foster
The descendants of those brought up amid the height of the witch-burning craze who became among the first to colonize settlements like Salem, Massachusetts, continuing the misogynistic and prejudiced witch trials in the United States.