All of the Work, None of the CreditDon’t Drop the Ball on the WNBA’s Activism 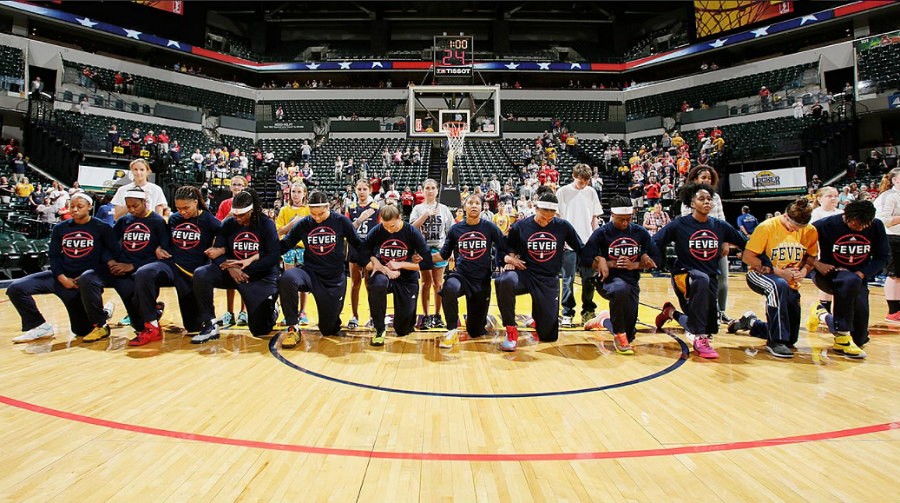 The Indiana Fever kneel together on the court in 2017 (Photo credit: JoshFlynn/Twitter)

Recently, President Trump made headlines—and enraged many NFL players, coaches, and owners—when he said that players who protested during the national anthem should be fired. In response, more than 100 players participated in some semblance of an anthem protest—the largest demonstration to date—and many teams released statements condemning Trump’s comments. But Sunday was not just a historic day for the NFL: During the first game of the WNBA Finals, the Minnesota Lynx linked arms in solidarity during the anthem while their opponents, the Los Angeles Sparks, walked off the court and into the locker room. The WNBA’s visible protest is no surprise: They’ve been the most socially conscious professional sports league for a while now. This demonstration is just the latest example in a long line of actions WNBA players have taken to protest injustice. Yet much of the media attention about anthem protests ignores the leadership role these women have taken.

Sadly, this is part of a larger trend when it comes to women—and Black women in particular—not receiving the credit they deserve. In the United States, women’s sports are considered “second tier,” causing all women’s professional sports, including the WNBA, to fight for viewers and ticket sales. Women athletes earn less money (even when outperforming their male counterparts), and their accomplishments are often downplayed, their status as athletes almost always prefaced with the descriptor “woman.” Hell, it has been implied that Serena Williams—the most dominant tennis player of all time—would be less successful if she played in the men’s division. Yet women athletes are also at the forefront of political activism, which goes largely overlooked as the media focus falls on male athletes such as Colin Kaepernick, Michael Bennett, and LeBron James. For instance, Megan Rapinoe was the first white professional athlete to kneel for the anthem, but the Cleveland Browns’ Seth DeValve often gets the credit.

Last season, three WNBA teams—the Indiana Fever, New York Liberty, and Phoenix Mercury—were fined for violating the league’s uniform policy by wearing Black Lives Matter shirts. Four teams protested the fines with post-game media blackouts in which they only talked about the killings of Philando Castile and Alton Sterling and other instances of police violence. Though the Minnesota Lynx weren’t fined, their protest caused off-duty police officers working security at their games to walk out. Fever all-star small forward Tamika Catchings pointed out the hypocrisy of the league providing shirts for all of the players to wear following the Orlando Pulse shooting, but not standing by them when they expressed solidarity for Black and Brown victims of police violence. “Instead of the league taking a stance with us…we’re fighting against each other,” she told the Associated Press.

Liberty guard Tanisha Wright echoed those sentiments, saying, “We were okay with that, we wanted to support [Orlando], but also they can’t pick and choose what initiatives to support and what not to support just because it doesn’t push their agenda.” However, after outrage from the players and the public, and support from NBA players such as Carmelo Anthony, the fines were dropped. Later that season, every single member of the Fever took a knee during the national anthem. This season, they’re ramping it up even further: After the white supremacist violence in Charlottesville, Virginia, the Washington Mystics and Los Angeles Sparks intertwined and locked arms during the national anthem before their nationally televised game. In 2017, only 16 of the league’s 34 games were broadcast nationally, and the players used that bigger platform to take a stand. Before the game, Sparks forward Nneka Ogwumike told ThinkProgress the teams wanted to “stand united in lieu of the [current] sociopolitical climate.” Just a week later, the New York Liberty hosted a town hall about race featuring athletes, racial justice advocates, and members of law enforcement.

The Mystics met with civil rights icon and Georgia Representative John Lewis. The Seattle Storm partnered with Planned Parenthood this season, making them the first professional sports team to do so (in contrast, the Kansas City Royals features ads from crisis pregnancy centers in their stadium and on their radio broadcasts). The Storm, one of only two all-female ownership groups in the WNBA, raised more than $50,000 for the reproductive health organization, which is especially important in a political climate where it may be defunded. The media has reported only sparingly on WNBA players’ activism, most notably when players were facing fines in 2016. ThinkProgress’ Lindsay Gibbs is one of the only journalists who has consistently reported on the league’s social action, providing the kind of full-throated coverage that male athletes receive for their off-court actions. It’s part of a larger trend in which the contributions of women athletes are overlooked in almost every way.

It’s a noticeable void in sports media coverage, one that will only be filled when women athletes command the respect they deserve—which will likely happen when there are more women working in sports media. It’s no coincidence that, just as women are undervalued as athletes, women are also overlooked in sports media. Perhaps there’s an argument to be made that WNBA players have less to lose by speaking out; money is power, after all, and the money is in the NFL or the NBA. About half of the WNBA teams actually lose money, and viewership for games broadcast on ESPN was a modest 200,000 in 2015. Attendance at games that same year averaged a little more than 7,000. WNBA players actually make more money playing overseas in the off-season than they do in the United States, which is a testament to how the women are undervalued as athletes. As of 2015, the top WNBA salary was $107,000 per season, and in 2017, the average salary was $51,000. Compare that to the NBA, where the average salary is $6,355,233 and Steph Curry will make $34,682,550 this season.

Playing overseas, players can make between 12 and 15 times as much as they make for the WNBA. But implying that the WNBA’s struggles for revenue and viewers make it easier for its athletes to be politically outspoken is a disservice to the athletes, coaches, and owners who are sticking their necks out. What the league and its players are doing is a testament to how frequently women—and Black women, in particular—are on the frontlines of pushing for change, only to be erased from the history books or see their work downplayed or credited to someone else. As the 2017 season comes to a close, we must recognize the women of the WNBA for blazing trails for activism among professional athletes. If we’re going to applaud male athletes for becoming outspoken about social issues, we have to lift up the female athletes who already are by making sure they’re at the forefront of our conversations about athlete activism.