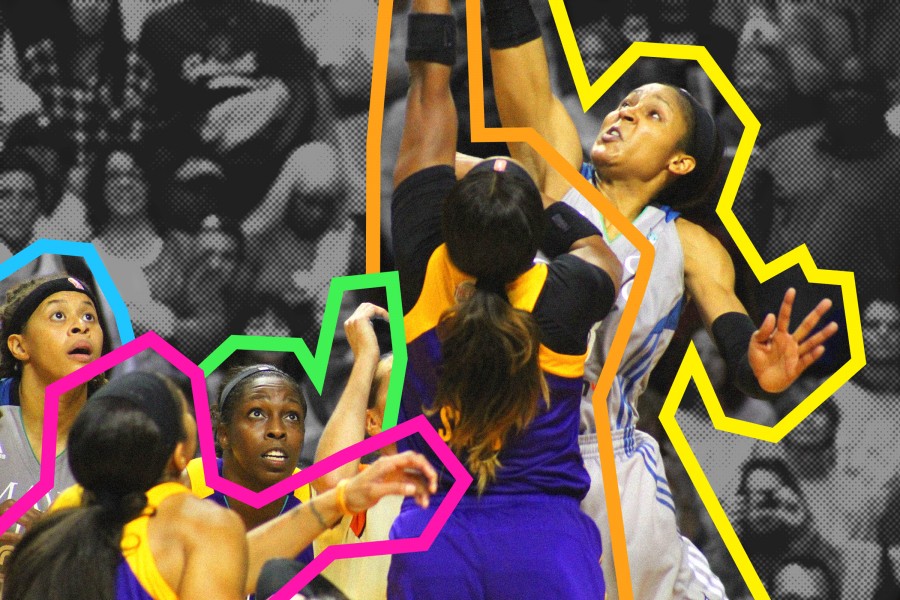 The 2018 WNBA season began last month with lots of excitement and buzz. ESPN2 broadcasted the season opener between the Minnesota Lynx and Los Angeles Sparks—a rematch of the 2017 championship—and reached almost 300,000 viewers, a 38 percent increase from the previous season. There are definitely more eyes on women’s basketball than in past seasons, and for once, those increased numbers will appease more than network advertisers.

Before the season began, the WNBA announced Take a Seat, Take a Stand, a new campaign that will use ticket sales to support six organizations that advocate for women and girls. For each ticket purchased, the league will donate $5 to Bright Pink, a nonprofit focused on the prevention and early detection of breast and ovarian cancer; GLSEN, which aims to create safe and inclusive schools for LGBTQ students; It’s On Us, which is working to shift the way our culture thinks about sexual assault; MENTOR, an organization that supports youth mentorship; The United State of Women, “a national organization for any woman who sees that we need a different America for all women to survive and thrive;” and Planned Parenthood.

In many ways, Take a Seat, Take a Stand supports the activism that WNBA players have been engaging in for years. “This type of community or civic engagement is really encoded in the DNA of the WNBA,” says WNBA president Lisa Borders. “So this promotion, this initiative, is really the next iteration of the concern that has been shown and the position that has been taken previously. Call this a ‘formalizing’ of our perspective that each of us has an opportunity and an obligation to step forward and be part of the solution.”

Since 2016, WNBA players have been on the frontlines of athletes raising awareness about racial justice, police brutality, and white supremacy. As I wrote last year, “three WNBA teams—the Indiana Fever, New York Liberty, and Phoenix Mercury—were fined for violating the league’s uniform policy by wearing Black Lives Matter shirts. Four teams protested the fines with post-game media blackouts in which they only talked about the killings of Philando Castile and Alton Sterling and other instances of police violence… [T]he New York Liberty hosted a town hall about race featuring athletes, racial justice advocates, and members of law enforcement. The Washington Mystics met with civil rights icon and Georgia Representative John Lewis.”

Following the Pulse shooting in 2016, the league even gave shirts to players to wear to honor victims. “It’s not new, the concept of giving back, supporting women, supporting families, supporting communities. It is just who we are,” says Borders.

“So we are putting our money where our mouth has always been. Five dollars from each ticket sold during this initiative at certain designated games are contributed back to one of six national nonprofits and/or we are encouraging our teams to select local nonprofits that they want to work with. So consider it being the next iteration, or ‘WNBA 2.0’ in terms of community involvement and support for women, who are really the core of every community.”

The idea for this initiative came from the players, who Borders describes as “deeply steeped in their communities.” Take a Seat, Take a Stand is a bold move, especially as Donald Trump calls for athlete-activists to be fired and professional sports leagues, like the NFL, kowtow to his whims. In many ways, this is the WNBA’s way of saying, “We reject and will not be swayed by this administration.” While the NFL has put in place a cowardly new National Anthem policy in which players can be fined for kneeling during the song (which, as some has noted, actually violates some state constitutions), the WNBA has continuously supported their players right to speak out about injustice.

And while the Philadelphia Eagles were uninvited to the White House after many players said they wouldn’t go, the WNBA champion Lynx were never invited at all—but they’ve still planned a trip to D.C. to do community service. The Take a Seat, Take a Stand campaign is also more exhaustive than the Boston professional sports teams’ Take The Lead initiative, which lacks concrete commitments and doesn’t offer financial support to organizations working for racial justice. The video ad for the WNBA’s campaign is just as in your face: The commercial includes a sign painted like a rainbow with the word “feminist” written across it. Not only are they embracing LGBTQ equality, they’re not shying away from using the word “feminist” as many celebrities have done.

Supporting Planned Parenthood could also be considered controversial, though Borders disagrees. Last season, the Seattle Storm raised over $50,000 for the organization, becoming the first professional sports team to directly partner with the healthcare provider.

But taking a stand, as these players are doing, continues a long tradition of women athletes, particularly Black women athletes, being on the forefront of social change. “We’re so grateful the WNBA is standing up for the 2.4 million patients who rely on Planned Parenthood and supporting issues that affect the health, well-being, and success of women and girls,” Dawn Laguens, executive vice president of Planned Parenthood Federation of America, said in a statement. “Players have used their platforms to bring attention to inequality and, through Take a Seat, Take a Stand, the WNBA is giving fans an opportunity to join them in the fight for social change.”

And the WNBA has no plans to apologize to anyone who might feel alienated by their stance. “If it doesn’t resonate then it’s not for them,” says Borders. “It’s for those folks with whom it does resonate.” And while the league is actively supporting their communities, they need a return investment. Borders is inviting everyone to come to a game if they’re in one of the 12 markets where there is a team. “If not, they watch us on ESPN… or on [WNBA] League Pass, which is our digital platform. Or when we are streaming on Twitter during our actual games.” League Pass is less than $20 for the entire season.

And supporting the WNBA this season sends a clear message to other professional sports leagues: We want to watch the leagues who don’t suppress their players’ right to free speech.

Magical Thinking: The Media’s Disturbing Portrayal of Katinka Hosszu’s Relationship with Her Husband and Coach

While Sports Are Rife With Homophobia, Queer Athletes and Fans Find a Home in Women's Soccer