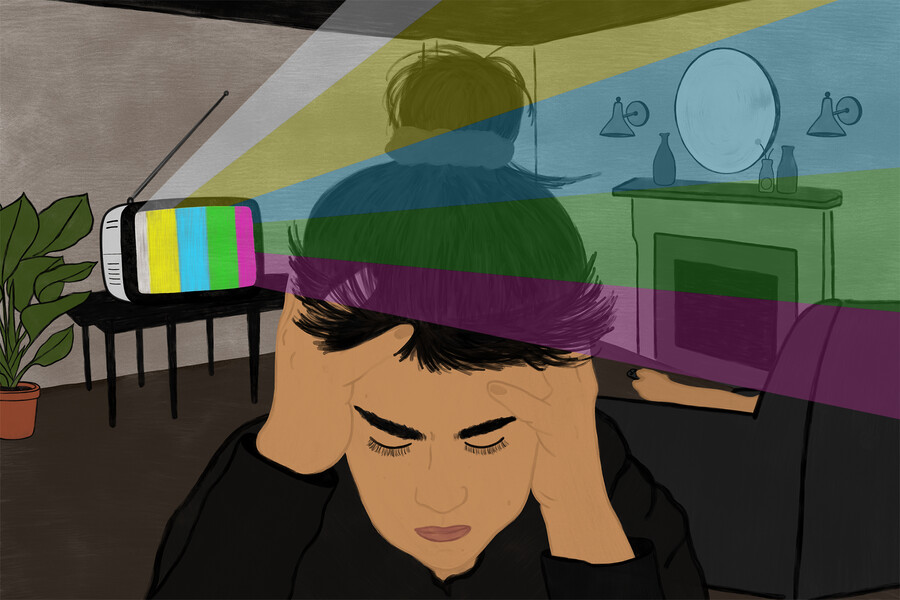 My room is sandwiched between my parents’ bedroom and the living room, and each room has a television set that’s always playing a constant loop of drama, comedy, and loud, rambunctious Donnie Wahlberg one-liners. I lay in the dark, my head between two pillows, one separating my pounding skull from the dull mattress and the other creating a shield for my ears. In between the throbbing, blood rushing, and pulsating ringing, sounds like sirens, gunshots, and industry-standard dialogue invade the privacy of my dreams. I wince as I grab my phone and the bright blue light shines on my face. I text my mom, “Do you mind turning it down a bit?” My dreams depend on my migraine’s pattern: When I’m in the most pain, my dreams are in their most vague and shadowed state, coming at full force with terrifying visuals that prevent me from being fully immersed in sleep. In one, I’m sliding down a chocolate rollercoaster headed to Hades’s den, when, suddenly, a knifelike pain cuts into the image. It’s married with the sounds of explosions and more guns.

My mom hasn’t responded, and I don’t want to text her again; the pain from even the dimmest light from my phone is too much. I sit up. Once my blurry vision corrects itself, I find my footing on the cold tiles below. I begin to walk. In the living room, my mother is asleep, her hand on the remote, unaware and unbothered by the sound. I turn off the television. Both my mother and I have migraines, but our illnesses are autonomous. She hallucinates with her pain, and I have visual, blurry auras with mine. Still, there’s tension between our two illnesses: Her migraine and pseudoseizure combo requires distraction and my chronic migraines require caffeine, a dark room, and, most important, silence.

Every night, at least one family member fulfills the task of turning the television down to a reasonable volume. We make sure Tom Selleck’s soothing voice and courageous mustache puts her to bed and then we lower or turn off the television. Tonight, I complete this task at one in the morning, but this time, she begins to talk—and she’s scared. “The floor,” she screams, “It’s flooding. It’s all wet. John, check the bathroom. Help.”

My dad approaches. “Mom was hallucinating again,” I tell him. She opens her eyes and starts searching for the remote. “Can I have my show back on? It’s calming. Please?” I turn the volume up a bit and put the remote out of reach. When she drifts off, her finger can slip on the volume, sending it all the way up to 60. She catches me and asks for the remote. I hand it over reluctantly, knowing that the battle between our migraines will continue for many nights to come

Too often, society only recognizes and considers physical disabilities, marked by the need for things like wheelchairs, prostheses, and oxygen tanks. However, there are many disabilities that are less visible but no less taxing on everyday life. According to the Migraine Research Foundation, chronic migraines affect nearly 39 million people in the United States and one billion people around the world, with symptoms ranging from nausea and vomiting to vision loss and debilitating pain. Migraines are the third-most prevalent illness and sixth-most disabling illness in the world, and women are three times more likely to suffer from the invisible illness than men. That latter statistic makes it nearly impossible for women with chronic migraines to get an effective treatment regimen or adequate work accommodations.

As a March 2020 article in Health notes, the “gender factor” is one of the defining characteristics of invisible illnesses. “The reality that many invisible illnesses disproportionately affect women creates another, unique obstacle for patients: differences in the way female and male patients are treated,” Sunny Sea Gold writes. “One study from the Hospital of the University of Pennsylvania found that women had to wait longer to be given pain meds in the ER than men. In a seminal paper published in the Journal of Law, Medicine & Ethics, two researchers from the University of Maryland—one a lawyer, the other a PhD-level nurse—concluded that women are often ‘portrayed as hysterical or emotional’ in medical circles, and that doctors find women to have more ‘psychosomatic’ illnesses and ‘complaints due to emotional factors’ than men.” These biases cause a disproportionate response in medical care for female patients. Since there are no visible physical symptoms—and there’s a long history of stereotyping women with invisible illnesses as “hysterical,”—women aren’t always able to get proper care.

Growing up, I thought it was normal to get a headache after passing a food cart with funnel cakes or to experience a sudden zigzag pattern in my line of vision, followed by the worst pain imaginable. No one had ever told me otherwise. My mom always complained of headaches in times of high stress; my dad would massage his forehead after he ate processed food. How was I supposed to know I had a disability? I didn’t visit a neurologist until I was 19 and my usual zigzag eye dance caused me to lose peripheral vision for 20 minutes. I was scared into self-advocacy as my neurologist pushed medication, medication, and more medication. This same doctor, who I eventually stopped seeing, never missed a chance to point out that I should’ve come sooner, maybe 10 years sooner. I didn’t know I had a disability until I was sitting in her waiting room flipping through pamphlets for light reading. The words “chronic,” “episodic,” “aura,” and “incapacitated” danced off the slick pages. I came to understand why Advil never did the trick, but since I was never given information about chronic migraines, I had no way of knowing they were considered a disability or that I was supposed to seek medical care. So, why was I being reprimanded?

According to the Migraine Research Foundation, a migraine is a “neurological disorder involving nerve pathways and brain chemicals.” It’s not just a severe headache or simply a headache accompanied by nausea—it’s a chronic disease whose symptoms are debilitating and prevent migraine sufferers from completing everyday activities. My migraines are triggered by stress and lack of sleep (convenient when you have both primary and secondary insomnia), but they’re also aroused by certain, pungent smells like bleach or the scent of Bath & Body Works’s Warm Vanilla Sugar products. Flashing lights, strobes, and even the brights on passing cars can wake my migraine from its hibernation. High-fructose corn syrup, corn syrup, or anything artificial like Yellow 5 can put an unyielding target on my migraine episodes. And, as the foundation of all of my triggers, my scoliosis causes my spine to curve in just the right spot to put pressure on my neck and its surrounding muscles and joints. Physical therapy twice a week is what it takes to help massage out any potential episodes. While the episodes themselves are the reason for the disability classification—temporary loss of vision, debilitating pain, inability to concentrate—avoiding triggers can make day-to-day activities equally burdensome, and sometimes impossible.

Although I am “lucky” to have received a diagnosis—more than 50 percent of migraine sufferers are undiagnosed—women experience disproportionate symptoms compared to men. Due to fluctuations in estrogen levels, cisgender women tend to have more frequent attacks and experience worse symptoms during episodes. And when it comes to advocating for ourselves in healthcare settings, the onus for receiving accommodations is placed on disabled people. Aparna R.’s 2020 article for the Disability Visibility Project surveys the very question of self-advocacy that the landmark Americans with Disabilities Act (ADA) requires of its protectees. Describing her brutal firsthand account during her master’s program, Aparna explains how these protections and available accommodations for the disabled—accessible buses, test-taking accommodations, virtual learning, public braille signage—can only be serviced when you ask for them.

“Even with medical documentation on file, disabled BIPOC face added suspicion, resistance, and stigma from instructors, particularly for invisible disabilities,” Aparna R. writes. “We are also stereotyped in racially coded ways as unreasonable, aggressive, and ‘angry’ when we self-advocate.” And even then, those without access to healthcare or certain documentation, may not receive the accommodations they need in the workplace or classroom.

A migraine is not just a severe headache or simply a headache accompanied by nausea—it’s a chronic disease whose symptoms are debilitating and prevent migraine sufferers from completing everyday activities.

Only minutes have gone by as I hear the faint whispers of a sitcom coming from my parents’ bedroom. As I move from the living room to the hallway, my fingers become antennas, looking for anything on the wall to ground my step. I find the chair rail and slowly move toward my next mission: silence. I stand in the middle of the hallway, my right side resting against the wall, and I throb with pain. My legs turn from weighted metal to jello to bricks, all within seconds. My arms are overwhelmed by cramps and a firework sensation. My head is in so much pain—ears pulsating; twisting screws at my temples; every inch of my skull has an icicle, rubberband, or knife going at it—that I have moved past logic and exclusively toward my mission. Why must I be so stubborn? I wonder if I had just let the volume be, maybe the medicine would have kicked in? Then I see the faint glow of the television.

I stumble to my parents’ bedroom, get my hands on the dresser, and regain balance. I look for the power button on the television sitting atop the dresser, its accompanying remote long gone, and press until there’s no more sound. I take in the air conditioner’s buzz and the sound of the refrigerator producing ice. I hear my dog’s collar jingle as she adjusts positions, scratches herself, and licks her fur clean. I hear the house. I hear what silence is like. I shimmy down and rest against the dresser until I’m ready to move again. With the two televisions off, the darkness starts to set in. The pain finds a way to breathe. I want to stay here, with my energy depleted and my will to move gone. As I look into the dark hallway through my parents’ doorway, trying to estimate how many steps it will take to reach my bed, I hear her. I hear her asking for the remote again.

Read this Next: “What Doesn’t Kill You” Tells the Gut-Churning Truth about Chronic Illness 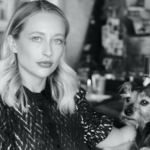 by Jordan Davidson
Crohn’s disease is unpredictable, cruel, and gross. There’s no way around that. 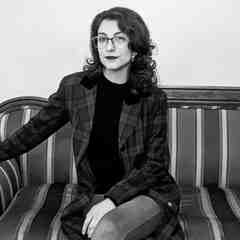 Lynsey Giardina is a senior at Loyola University New Orleans, earning her Bachelor’s degree in English with a concentration in creative writing. She’s the editor-in-chief of the campus’s online magazine, Critical and Creative Arts Publication, and the senior editor/assistant director of the Women Resource Center’s Feminist Forum. She’s also read for the 1718 Literary Society and presented at Loyola’s Annual Peace Conference.