For Women Candidates, “Progressive” Is a Double-Edged Sword | Bitch Media 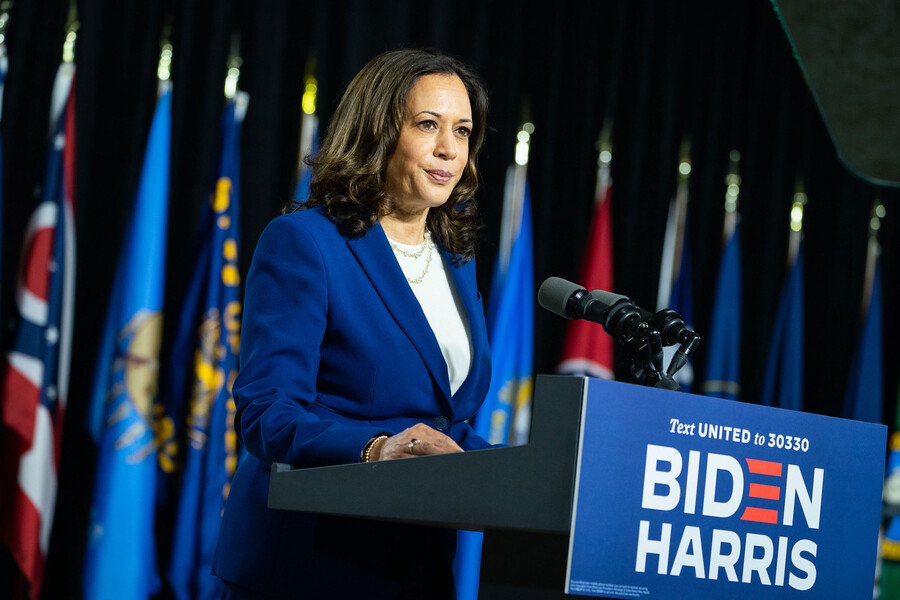 Justice Ruth Bader Ginsburg’s recent death has sparked at times vicious debate about her legacy: Depending on who you ask, she was either a  trailblazer for gender equality and champion of reproductive freedom, or just another neoliberal shill intent on benefiting from “identity politics” while supporting oil pipelines and Indigenous land theft. There is, of course, room to debate the specific rulings and opinions that comprise her legacy on the bench, and it’s critically important to do so. The mixed feelings that surfaced after Ginsburg’s death, particularly online, reflect a disillusionment that has grown increasingly strong as the last four years have brought a resurgence of discourse about women, politics, and power. The subject—or perhaps the target—of this disillusionment is the figure of the “girlboss”—the strong, media-savvy, and generally white women who build brands on being outspoken on behalf of themselves and women like them.

Sophia Amoruso, the founder of online fashion retailer NastyGal, coined the term to title her 2014 autobiography, and it has since come to be a self-mocking (or just mocking) catchall to describe women doing capitalism with cutesy titles like “She-E-O” and a millennial-pink flourish of empowerment rhetoric. When Audrey Gelman, who cofounded The Wing in 2016, called Hillary Clinton’s nomination for president proof of “the golden age of women in power,” it felt like the pinnacle of the girlboss’s ascent. It didn’t last, something that became clear earlier this year as reports from inside workplaces like Away, Refinery29, Ban.do, and The Wing exposed that companies helmed by girlbosses can be just as toxic and soul-crushing as any others. Author Leigh Stein, whose biting girlboss satire Self Care was published this summer, went so far as to declare that the “end of the girlboss” was nigh,  arguing that “mix[ing] capitalism with social justice” isn’t a recipe for changing workplace cultures and values. And Stein’s analysis doesn’t apply only to women occupying C-suites, but also to women politicians and other leaders whose gender can serve as a smokescreen.

In recent months, social media has teemed with viral tweets dismantling the idea that representation alone isn’t necessarily progress. More women and people of color in law enforcement, or operating drones, or patrolling the Southern border, won’t alleviate institutionalized state violence and oppression. And the embrace of these tweets and memes reflects the reality that, to more and more people, it doesn’t matter who the face of the oppressor is, if the same people—Black, Indigenous, and people of color; the working poor; women and LGBTQ folks—are marginalized elsewhere. The idea that these groups should be happy to be represented at all is a further insult: Take Donald Trump’s appointment of Gina Haspel as C.I.A. director in 2018, a calculated appeal predicated on the idea that women wouldn’t care that Haspel oversaw torture as part of the War on Terror, only that she was a woman.

Recognition that hollow symbolism is no substitute for meaningful, substantive progressive policies, that diverse representation doesn’t guarantee healthcare or student debt forgiveness, is vitally important. Yet there’s also danger in a knee-jerk assumption that meaningful discourse about gender and identity in politics is a slippery slope to toxic neoliberalism. The current election cycle is confirmation that the unprecedented number of liberal and progressive women who ran for—and were elected to—Congress in 2018 wasn’t a fluke. So it’s been concerning to see ostensibly progressive and left-leaning people engage in willful conflation of identity and symbolic politics with neoliberalism and capitalism. Often, this response can be sexist and racist, and contribute to double standards in who is and isn’t seen as progressive enough along lines of race and gender.

This year, women are at the center of some of the most important elections for the future of our democracy—now more than ever, amid this existential fight to replace Justice Ginsburg on the Supreme Court. And all of them are running on a wide ideological spectrum, from Amy McGrath, the “Trump-friendly” Democratic candidate for U.S. Senate in Kentucky; to Cori Bush, the Black Lives Matter organizer–turned-Democratic nominee for Missouri’s 1st District; to Christy Smith, who got her start as a school-board member and is now running in California for Katie Hill’s congressional district; to Kamala Harris, the prosecutor-turned–U.S. senator who would be the first Black and first Asian American woman vice president in history. Some of these races could decide the fate of the White House, the Senate, and Congress. Up and down the ballot, a record number of women have run for office this year. The current political climate raises questions about the standards these candidates might face to be seen as actually progressive—and not just as women running on being women.

That is the tightrope act of being a woman in politics: how to focus on policy and also be personable, how to be personable without ever talking about formative, real-life experiences with sexism and racism, and being reflexively lambasted for invoking “identity politics,” a subject that’s often loathed by the left and right alike. Symbolic politics of identity in the absence of meaningful plans to redistribute wealth, provide healthcare and education, and invest in communities rings hollow. But identity politics can and often does entail critical solutions and approaches to racial justice, economic justice, and gender justice, from criminal-justice reform to housing policy to abortion access. And more often than not, it’s women, people of color, immigrants, LGBTQ folks, and other lawmakers from marginalized backgrounds who author and sponsor legislation to address these issues. It’s Black women like Harris and Representative Ayanna Pressley who introduced legislation to address disproportionately high Black maternal-death rates; it’s women and LGBTQ lawmakers fighting for sexual and reproductive health rights; it’s refugees like Representative Ilhan Omar who are the loudest voices speaking out against U.S. imperialism and militarism.

Despite perceived advantages in being able to “use” race, gender, and identity for political gain, talking about personal experiences with racism and sexism often comes at great political risk for political leaders. If liberal or progressive female candidates talk about such experiences, they may be perceived as less progressive—even neoliberal—for failing to focus on progressive, identity-neutral policy alone. In contrast, white male politicians are privileged by the ability to seem inherently neutral. Accusations that someone is “playing the race card” or “playing the woman card” are rooted in the racist, sexist notion of white men as universal, rather than running on their own identity politics. In January, CNN reported that then–presidential candidate Elizabeth Warren had confided in an aide that her fellow Democratic candidate Bernie Sanders had privately told her he didn’t believe a woman could defeat Trump. The report drew widespread backlash among the left, as Warren and her campaign were lambasted for purportedly leaking “fake news” meant to accuse Sanders of sexism.

It’s not as though Sanders would be an outlier if he did state such a concern: The question of whether a woman can be elected president in a deeply sexist society is one even the most ardent feminists have asked for decades. Indeed, debates about whether women or people of color are “electable,” whatever that even means, have always been at the heart of American electoral politics. And regardless of how voters felt about Hillary Clinton, there’s simply no question that her 2016 electoral-college defeat—she did, in fact, win the popular vote—was possible because Donald Trump ran a campaign of misogyny and white supremacy that resonated with a base of aggrieved white men. Attacks on Warren and those who vocally supported her, including masses of social media users bombarding her posts with snake emojis, revealed an ugly truth: that merely stating that sexism exists in politics can imperil any woman’s political campaign.

There were and remain not only fair but important criticisms of Warren, from Indigenous folks and from the left. But the misplaced rage directed at a woman with extensive progressive bona fides made it clear that any progressive woman who purportedly “plays the gender card” runs the risk of being seen as a scheming, substance-free neoliberal. Ahead of what may be the most urgently important election of our lifetimes, we’re witnessing how “electability” often lies in the eye of the beholder. In the primary, the popularity of Joe Biden with Black voters and other voters of color in many states brought pundits and observers to the conclusion that voters who have more to lose might be more risk-averse, more likely to make “safe” choices, and less likely to believe in grand, progressive promises. But in truth, there’s evidence that goes both ways—in states like Iowa and Nevada, Bernie Sanders swept decisive majorities of voters of color on a platform of Medicare for All and systemic change.

It’s concerning to see ostensibly progressive and left-leaning people engage in a willful conflation of identity and symbolic politics with neoliberalism and capitalism.

But regardless, candidates of color and women candidates know they are inherently seen as “risky” to voters, and thus face greater pressure to temper their platforms and rhetoric accordingly. And it’s not just candidates who face pressure to maneuver themselves in a certain way: Women voters and voters of color are often pressured, in one way or another, to defy reductive narratives that they’re “voting with their vaginas” (a common criticism leveled at Clinton supporters) or choosing their candidates based solely on a shared identity. In 2016, Clinton ran in the general election on the most progressive Democratic Party platform in history, owed in no small part to an aggressive and competitive push to the left made possible by Sanders’ campaign. Clinton continued to face important criticism of her Senate record on foreign policy and criminal justice—but was offered little recognition for her campaign’s historically progressive nature or its symbolic importance.

As we continue to live with the fallout of Clinton’s 2016 electoral college loss, it seems worth questioning why women politicians are denied the grace to grow, reassess, and change. Must they always be defined by the most problematic versions of themselves? In this age of justified scorn for the “girlboss,” a balanced recognition of the sexism—and, for women of color, the racism—that these politicians face, and understanding that only substantive, progressive policy will create real change, has become a rarity. Candidates like Harris are well aware that they will likely be subject to different standards for what voters perceive as “progressive enough”—and these different standards can exist alongside the reality that, like Harris and her mixed record as a prosecutor, there are legitimate shortcomings and failures to accept responsibility and correct for.

Today, the flaws in the late Justice Ginsburg’s record should not be painted over, but rather, woven into the complex tapestry of her legacy. Ginsburg overcame massive, gender-based barriers to create groundbreaking change in the legal system, and fight for women and men alike to be able to live truly nuanced lives. But an indelible part of her legacy will also be her immeasurable symbolic power, the substantive change she made by drawing on lived experience—as a pioneering legal scholar, a cultural icon, and a woman who was unapologetically clear that gender shaped her politics because there was no way to separate them.