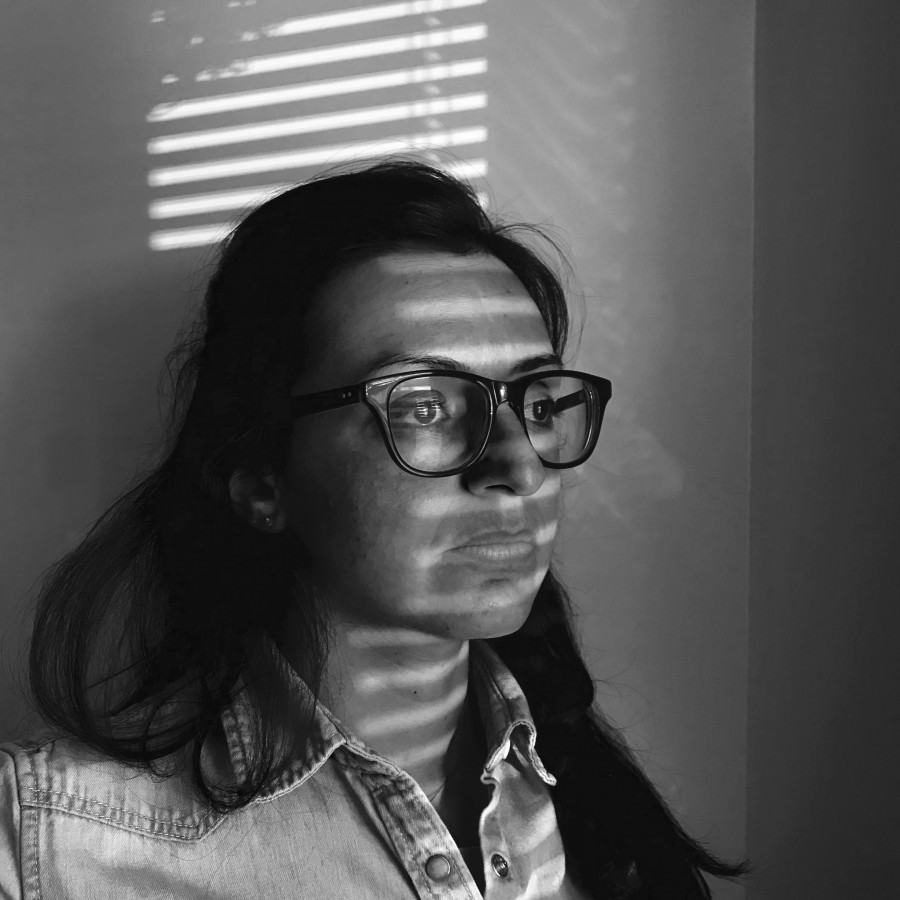 On a balmy 70-degree day in Addison, Texas, Kym Scott stood in the midst of the hustle and bustle of a photography conference. She recognized, suddenly, the face of a woman she’d only seen in photographs.

“Ra!” she yelled. It was her first time meeting an online friend IRL, but this greeting didn’t happen at your average conference and it didn’t spring from your average online friendship. Scott is the founder of Black Female Photographers, an online community that unites Black women who love photography. At the conference, Ra—a member of the group since it began 10 years ago—quickly took off all her camera gear before rushing to hug Scott.

Scott started Black Female Photographers on Facebook in 2008 after casually mentioning to her husband that she wanted to meet more women who love taking photos. It felt simple: She clicked a few buttons and suddenly BFP existed. As Scott describes it: “no fireworks.” But her drive to create the group speaks to a need for community among female photographers—and points to larger discrepancies in the industry. 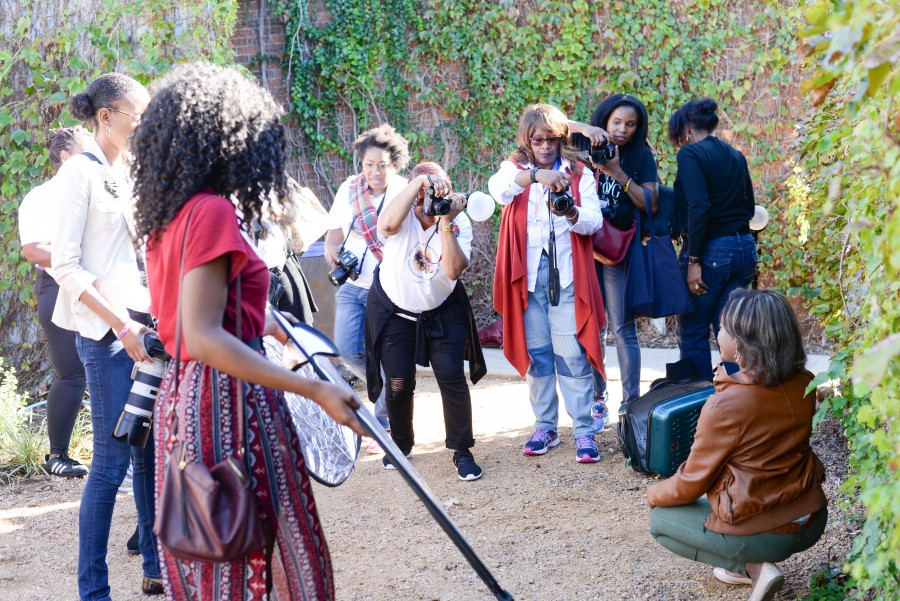 In 2017, TIME’s Director of Photography, Kira Pollack, wrote that she “was stunned to learn that over the last 10 years, the number of female entrants to the World Press Photo Contest has hovered around 15 percent (it remained at 15.5 percent in 2017).” That realization spurred TIME to publish a list of female photographers from around the globe, recommended “by female photojournalists, curators, and directors of photography in the industry.”

The discrepancies aren’t just in the historically macho field of photojournalism. The National Museum of Women in Arts states that “work by women artists makes up only 3–5 percent of major permanent collections in the United States and Europe.” And a 2016 annual report from Nikon revealed that “women account for just over 10 percent of the company’s employees.” In 2017, Photo District News found that only 30 percent of the artists represented in New York’s major galleries were women. In Los Angeles, 70 to 80 percent of gallery-represented photographers were male.

Hyperallergic reports that of the artists represented by top commercial galleries in New York, only 30 percent are women. And of that 30 percent, more than 80 percent are white women. Photography has historically centered around the male gaze, but more creators are now focusing on the female gaze and the act of self-portraiture to gain more agency. Yet, female photographers of color are often left out of mainstream conversations, particularly when it comes to art history. 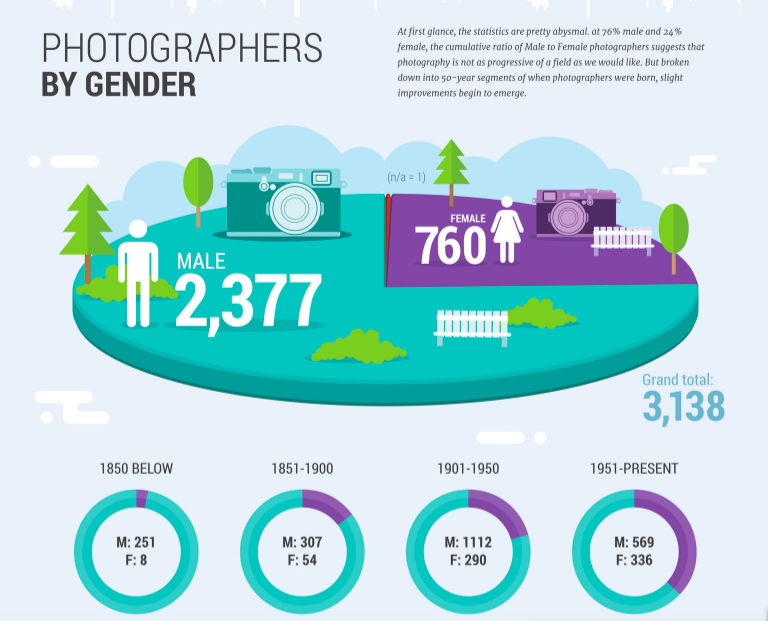 Building on the work of scholars like Dr. Deborah Willis, photographers Laylah Amatullah Barrayn and Delphine Fawundu created a biannual journal called MFON: Women Photographers of the African Diaspora in September 2017. In a March interview with National Geographic, the duo explained that being othered is one of the biggest obstacles for women photographers of color.

“It is quite problematic to be perceived as the ‘other’ or to see yourself reflected within the mainstream media through the white gaze,” they said. “This comes in the form of media outlets, organizations, museums, and art spaces that represent broad subjects—like photography, documentary, women, American, art—but ignore or display a very limited perspective of Black women photographers.” Just this year, National Geographic’s editor-in-chief Susan Goldberg acknowledged the magazine’s racist content, and its othering of “people of color in the United States and abroad.”

Not seeing themselves as either the subjects or the creators of art in a way that is empowering discourages women of color from pursuing a career in either photojournalism or fine arts photography. Thus, many of them have taken matters into their own hands.

BFP’s private Facebook group now boasts more than 3,000 members; in October 2017, the group held its first-ever Vision Conference at Addison Conference Centre. Kariba Jack, CEO of Black Female Photographers, says that female photographers often feel like “a few sprinkles in the mix of the rest of the industry,” so the Vision Conference helps photographers connect with other professionals. Jack recalls the group process, saying, “It was, ‘We can keep talking about this, or we can make it happen.’”

Between 100 and 120 people attended the convention, according to Jack, and it was mostly promoted through social media. Those “fireworks” that BFP’s founder mentioned came later—namely through the IRL connections the convention sparked.

“I didn’t realize the power of the moment of actually seeing the person…. When you see the people, in person, that have helped you lay that foundation,” said Scott. In 2018, BFP hopes to expand its reach by holding the group’s second conference in Atlanta. It’s not just the conference either: BFP encourages gatherings and photo walks in cities like Los Angeles, New York, San Francisco, and Chicago. In many ways, social media serves as the perfect tool for creating this sort of community: It heavily favors visuals, requires no fee to create an account, and allows women around the world to easily connect.

Verónica Sanchis—the founder, curator, and director of Foto Féminas, an online resource for finding Latin American women photographers—also recognizes the power of the internet and social media as a tool for archiving. As a Venezuelan photographer, she noticed that it was “so hard to find the works of contemporary women from the region.” Sanchis worked as a writer for Ventana Latina, a culture magazine where she wrote a monthly feature on women photographers.

In 2014, she decided to go larger: Foto Féminas features a variety of photographers and also regularly lets individual photographers take over its Instagram account, sharing the stories behind their work in their own voices. Most recently, Sanchis created the Foto Féminas library, the “newest chapter” in the organization’s mission. She’s been taking books created by Latin American female photographers to exhibitions and photobook festivals. Sanchis also worked with Peru-based photographers Rochi León and Solange Adum Abdala to install an exhibition in 2018 at Galeria ICPNA (Instituto Cultural Peruano NorteAmericano).

She hopes to make the photobooks more accessible over time and create a physical space for Foto Féminas to house its photobook library. “Essentially it’s the same concept, which [is] to archive but it’s actually to archive photobooks—like the actual physical books—by Latin American female photographers,” said Sanchis.

Women Photograph serves as a resource for artistic growth; its mentorship program pairs 11 photographers and 11 photo editors with 22 early-career photojournalists for a year. They’re also working with Nikon to offer five $5,000 grants to “new or in-progress” photography projects by “visual journalists working in a documentary capacity,” and one of those grants has been set aside for a nonbinary or transgender photographer. (Sanchis serves on the judging panel.)

Female photographers no longer have to rely solely on mainstream acknowledgment of their work from worlds that often exclude them. And budding photographers, as well as art historians, now have more archives and communities that can help them discover the work of women photographers of color. In May, Natives Photograph launched “to elevate the work of Indigenous visual journalists.” Visitors to the site have the option of requesting the “complete electronic database of members” in order to amplify and more easily hire Indigenous photographers.

Trump Builds on Manifest Destiny with “The Wall”