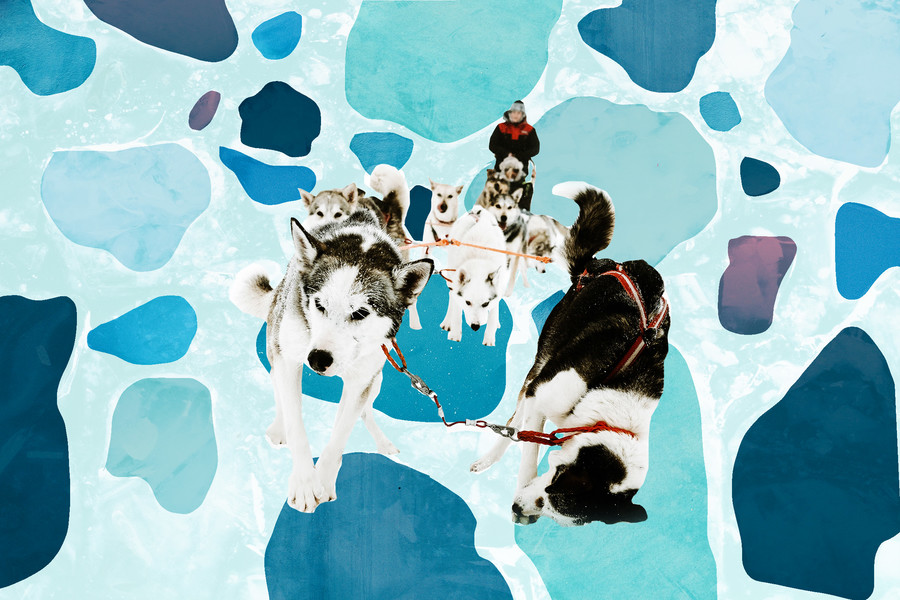 A few weeks after the last sunset of the 2016, I braced for an incoming storm with two of my coworkers at a sled-dog kennel in one of the northernmost places on Earth—Svalbard, Norway. The kennel sat at the end of the only road leading out of town, and the governor had decided to close that road before the storm hit. The mountains around us, smudged into shadows, were the Earth’s tensed shoulders as it held its breath. Everyone was told to secure everything outside and stay in their houses. But someone had to stay with the dogs, so the three of us—Trude, Maja, and I—packed sleeping bags, freeze-dried pasta, and hot-water thermoses, and headed out. The dogs were happy to see us, uncurling from their places on the ground or leaping out of their houses to say hello, eyes glowing in the light from our headlamps.

Everything else was dark—the sun had sunk below the horizon and would stay there for four months, the snow hadn’t yet fallen to brighten the land, and there was no electricity in the valley. We made camp in an old sauna: unrolled sleeping bags and reindeer skins on the benches, lit a fire, and waited. This is one of my first memories of becoming a musher. I was new to the dogsledding world at the time; I didn’t know much about the sport other than what I witnessed in the contagious energy of the dogs that burst forward whenever running harnesses or food buckets come out. The first time I saw them run in a team together, it felt like falling into a riptide. Sled dogs take all that explosive energy and focus it on one thing: running forward. As soon as the snow anchor leaves the ground, the sled accelerates and the dogs go silent. They are in their zone. It’s nearly impossible to witness that kind of energy and not want to be wrapped up and carried away by it.

Historically, the polar-hero narrative is a story of conquest and exploitation written mostly by men. The Norewegian archipelago of Svalbard, originally a no-man’s land, quickly became a man’s world after its discovery in 1596. The islands had no native human population, but early explorers claimed it was full of other life: so many bowhead whales in the surrounding sea that people could walk across their backs from one side of the fjord to the other. Consequently, whaling companies from different nations came up in the 1600s, and the bowhead population was nearly depleted by the end of the century. (This species still has not fully recovered.)

After the whales were gone, hunters and trappers came up for the furs from foxes and polar bears. They lived in small huts made of driftwood and killed as much as possible during the course of a year or longer. Before the bears were protected in 1973 by the Agreement on the Conservation of Polar Bears, a trapper named Henry Rudi was notorious for killing more than 700 of them. With the invention of the self-shooting trap—essentially a wooden box containing a rifle and a piece of string with one end on the trigger and another on a piece of meat—the bears shot themselves in the heads. The hunters and trappers were rarely rewarded with economic wealth, but their adventures in the North attracted attention. When they returned home, they were welcomed as heroes.

Next came the coal-mining companies. Coal was never one of Svalbard’s profitable industries, due to the amount of resources needed to mine in a remote and inhospitable landscape; but running a company town was a geopolitical tool to take ownership of a previously unclaimed spot in the Arctic. The explorers who first began racing to the poles were, like the hunters and trappers before them, fueled by their egos. They had notions of being the first and the best: traveling in hydrogen balloons, airships, submarines, and flying boats to the drifting sheet of ice on the North Pole that almost always eluded them. When we work with dogs, it’s never about us. We are not heroes. Everything is about the dogs and their welfare, and about learning the behavior and conditions of the landscape. Those things are always above us.

Our work is not glamorous: We come home smelling like meat and dog shit, dirt permanently lines the undersides of our fingernails, we find pieces of food in our hair. But we also learn new ways of seeing by watching the dogs interact with the world around them: how their ears prick up when a reindeer crosses the valley in the distance, the way puppies walk on the tundra for the first time in their lives, pulled toward everything by the gravity of their own endless curiosity. Svalbard was deemed unfit for women from the start. Even in the 20th century, when women started spending extended amounts of time on Svalbard—Wanny Wolstad, the first female trapper, came up in 1932—their stories and presence were generally ignored in literature about the area. Women were believed incapable of handling the physical and mental challenges of living in the Arctic.

When I first started began with sled dogs, I grew muscles I didn’t know existed; I worked in ways I wasn’t sure I was capable of until, suddenly, there was no other way. But the kennel is an inherently egalitarian, inclusive place. Mostly women work here, but regardless of gender, we all look the same in heavy parkas and down jackets. During the polar night, it’s too dark to see each other anyway, faces shadowed by the beam of our headlamps. Everyone is expected to do the same work: build houses, chop firewood, carry buckets of water and dog food back and forth until everyone is fed. When it comes to carpentry or fixing things, the trick seems to be trial and error.

The dogs felt the storm coming before we did. One of them, restless, began whining; soon they were all howling, ears pointed back. The wind found us, pouring over the glaciers and funneling through the valleys until it arrived in full force. Trude and Maja wanted to stand out on the road and feel the weather. The rain started soon after. Gales pulled the flowing drops sideways and flooded parts of the road. Roofs began flying off the dog houses around two in the morning. We were alerted to every new storm development by all the dogs stirring and barking at once: A house had fallen over, a dog had gotten loose, something else was blowing around along with the wind. Each time, the three of us pulled on waterproof clothes and ran outside for updates, although by the seventh or eighth time we stopped bothering with getting dressed and just ran out in long underwear. Everything was already soaked; the battery on my headlamp was dying.

Inside, we kept ourselves awake by telling stories. They were mostly love stories: ones about why we moved to the North, what we find in the outdoors, why we choose to work with sled dogs. We each had our personal reasons for why and how we came to be sitting in that old sauna, but we agreed that there’s something elemental about living in the Arctic, about constantly facing conditions that shrink us down to size. It’s a place that demands attention, and to live here is to be more connected to the surrounding landscape. We talked about how we choose to live on Svalbard because it’s a reminder that we don’t have control. There are so many forces beyond us. But that’s the thing about driving dogs—in a way, it too is about giving up the need for control, abandoning the anthropocentric relationship that many people have with the outdoors.

When we work with dogs, it’s never about us. We are not heroes. Everything is about the dogs and their welfare, and about learning the behavior and conditions of the landscape.

We have to trust the dogs and ourselves, but we also have to trust nature, which will always be bigger than us. Mushing is about learning how to make it home through conditions we have no say in: whiteouts, blizzards, gale-force winds that appear from nowhere. It’s about survival rather than domination, about finding our place in a landscape rather than trying to conquer it. Because I’ve never seen a place so indifferent to people as Svalbard is. Every time I start to know or understand this place, it changes again: The rivers open up, or snow covers the mountains, or night takes over for months at a time. I am constantly struck by looking at things I know I’ll never reach or seeing the light shift in ways that will never be repeated. Once, when sledding up the slope of a glacial moraine with the dogs, the snow was so heavy that we kept sinking down and getting stuck.

When we finally reached the top, everything below us was washed in a pink alpenglow, and I knew I was unlikely to see that exact view ever again. I took it in before we started going downhill, and then the vantage point was gone. The moment drained between my fingers like water. There were many times when polar explorers trudged toward the North Pole on their skis only to realize the sheet of ice below them had drifted south faster than they could move North. They were moving in place for days on an endless frozen treadmill. But maybe it’s exactly those vast and unattainable spaces that inspire wonder. In her essay “The Blue of Distance,” Rebecca Solnit writes that beauty is in the distance itself, in the places we can never go, or own, or conquer:

The women I’ve met in the dogsledding world are some of the strongest people I’ve known, and they have showed me that it’s possible to rewrite the narrative. It’s possible to change our relationship to nature, to see ourselves as a single species in an interconnected, complicated story. Environmental justice and feminism are tied together in many ways—fundamentally, they are both demands for equality and a rejection of the masculine narrative of conquerors and heroes. 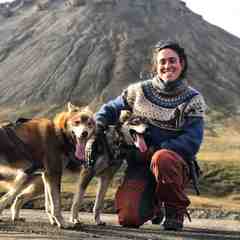 Kelsey Camacho lives in Longyearbyen, Svalbard, where she guides dogsledding trips and trains Alaskan huskies. They also train her. She is currently preparing for her first race. When she’s not with dogs, she teaches nonfiction writing workshops and tries her best to stay warm. Her writing has appeared in Nowhere, Proximity, Dark Mountain, and elsewhere.