Air Pollution Makes It Difficult for the U.S. to Recover from COVID-19 | Bitch Media

World on FireEnvironmental Racism and COVID-19 Are a Deadly Combination 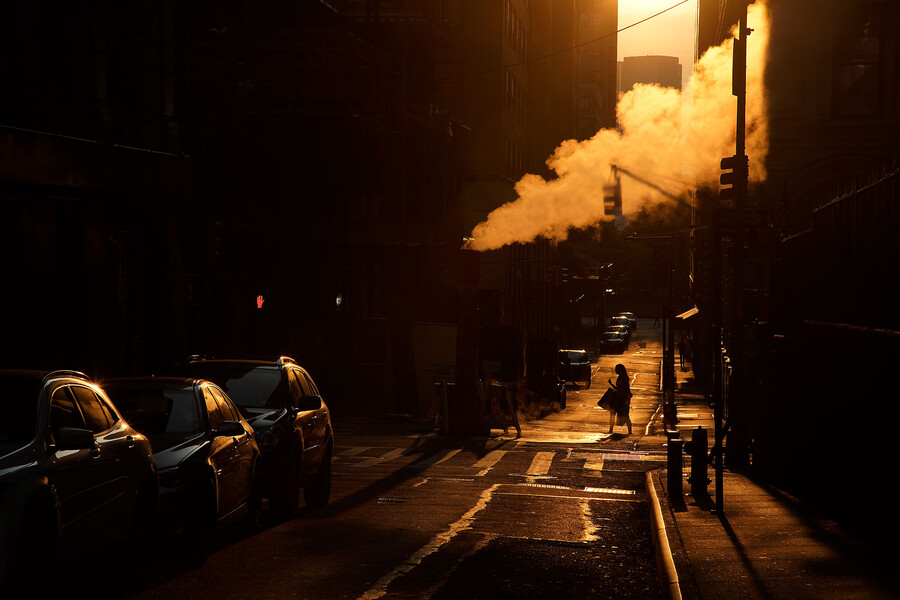 A woman crosses the street against the vapor from a steam pipe in lower Manhattan as the city continues Phase 3 of reopening following restrictions imposed to curb the coronavirus pandemic on July 19, 2020 in New York City. (Photo credit: John Lamparski/Getty Images)

Remember when COVID-19 was called the “great equalizer” and researchers suggested the virus was indiscriminate? Months into the pandemic, we have learned this is absolutely not the case: Black and Hispanic communities have been disproportionately affected by the novel coronavirus through the deadly combination of medical racism and the tragedy of capitalism. These days, “disposable” and “essential” are practically interchangeable. Essential workers—like delivery people, grocery-store workers, and restaurant employees—are being thrown to the wolves. There are no concrete, universal guidelines on how to keep employees safe, and even then, there’s no guarantee that non-mask wearers will not endanger the health and safety of employees. Not to mention, essential workers tend to be Black and/or Hispanic, which adds another layer of risk. But it’s the sleeper-agent nature of environmental racism, and its ability to make the impact of COVID-19 even more dangerous, that’s particularly insidious.

It’s no coincidence that these same communities have also been pushed to live in spaces that have been heavily impacted by environmental racism. Decades ago, Black communities were segregated to heavily polluted industrial areas near factories, plants, and dumps in a now-illegal practice called redlining. The hazards, which can range from poor water quality to increased exposure to pollution, still linger today. For instance, Black and Latinx people disproportionately suffer from lower air quality, despite producing fewer air pollutants than wealthy, white people. The result is that Black and Latinx folks have higher rates of respiratory illnesses, such as asthma. Now, due to these illnesses, as COVID-19 rates climb in the United States, these groups are the ones acutely vulnerable to the coronavirus. And air pollution, along with medical racism, is to blame.

Air quality improved in major cities during the early months of the COVID-19 pandemic because people were staying home and traveling less, but governments are continuing to flip-flop and push for businesses to reopen—prioritizing the so-called economy over the survival of their citizens—and weary citizens are begging for a sense of “normalcy.” As cities across the country continue to gradually and questionably reopen for business, it’s time to acknowledge how environmental racism has placed additional burden on those who were not only already more likely to catch coronavirus, but die from it, too. Dominique Thomas, a regional organizer for environmental justice group 350.org, told Bitch that the problem of air pollution and other environmental toxins connects back to white supremacy and racial capitalism. “It’s important for us to understand that these things are not a matter of elected officials or legislators not knowing about it,” she said.

Ultimately, the only cure for environmental racism is to entirely dismantle the structures that allow it to fester.

Rectifying the country’s air pollution problem could potentially be one avenue of justice, especially as more and more Americans claim to care about fighting anti-Blackness in light of Black activists demanding more equitable institutions following the murder of George Floyd. “These people know and they don’t care,” Thomas explained. “You can point to Anytown, USA, [and] you will find an example of an environmental hazard, toxin, or some type of environmental racism that’s occurring in a Black neighborhood. When it comes to Black lives and communities, we’re considered less than. We’re disposable.” While air pollution can’t give someone coronavirus, it can exacerbate to the extent by which one struggles with it. Air pollution is indicative of a poor environment, one that is inescapable—unless you are a wealthy white person with access to decent healthcare.

Dr. Robbie Parks, an environmental epidemiologist at Columbia University, explains that if you live in a poor or minority community, you already bear a disproportionate burden, but that people are “inherently stretched simply due to racism and racist systems.” These systems can range from lack of healthcare to inability to collect unemployment due to legal status. This environmental injustice also exists due to a lack of access to open spaces or increased car traffic. All have an adverse affect on health, and all adds additional danger to those exposed to COVID-19. “There’s so much evidence that minorities typically would have high levels of preexisting conditions,” Parks adds. “Being infected with COVID-19 may take you over the edge if you already have preexisting conditions due to your prior exposure and structural racism.”

But there are ways that we can mitigate that exposure. Urban planner Dr. Malo André Hutson, who wrote The Urban Struggle for Economic, Environmental and Social Justice: Deepening Their Roots, said that cities like New York need to prioritize open spaces like parks and deprioritize traffic in addition to following the data in order to make things more equitable. “It can’t just be that poor communities or communities of color take more than their fair share of these types of industries and certain levels of pollution,” Hutson said. “It’s incredibly important for the city to understand the risk and who’s at risk and monitor the data, really follow data to see what’s happening over time so that we know if it’s going to be, say, 100 degrees or 90-something degrees and less humidity and poor air quality. Do we have sensors set up for seniors? Are there ways that we can ensure that people are able to go to a cooler place with better air quality or just to go out, get outside? [There are]  a lot of challenges right now.” Ultimately, the only cure for environmental racism is to entirely dismantle the structures that allow it to fester. “We tend to talk very downstream,” Parks said. “A lot of these solutions, when you go back upstream, are fundamentally because of things like racism and inequality.” With air pollution, or with any other environmental hazard, if you prioritize the health and well-being of Black people, “everybody gets free,” Thomas said. “Our liberation is connected to everyone’s liberation.”