World on FireFanning the Flames of Climate Change as Australia Burns 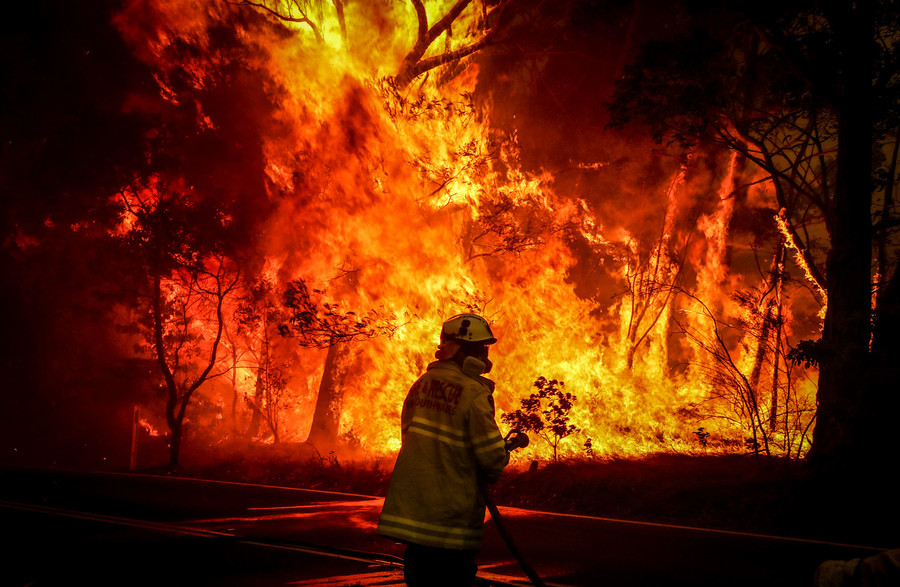 Fire and Rescue personnel prepare to use a hose in an effort to extinguish a bushfire as it burns near homes on the outskirts of the town of Bilpin on December 19, 2019 in Sydney, Australia. (Photo credit: David Gray/Getty Images)

As plumes of smoke suffocate those in Australia’s major cities and unruly wildfires scorch 14.5 million acres of bush—killing at least 28 people and displacing approximately 2,000 homeowners since September 2019—world leaders refuse to name the perpetuator responsible for such havoc: climate change.

Much like California, which has also suffered from an increase in out-of-control wildfires, Australia’s climate has become much drier and windier, exacerbating conditions that were already susceptible to fire outbreaks when the climate is at its most stable. It certainly doesn’t help that Australia just had its hottest year on record, and this year isn’t looking any better: The country’s largest city, Sydney, saw temperatures as high as 120 degrees Fahrenheit on January 4. The result is an ecological disaster composed of an ugly cycle of bushfires and freakish fire-generated thunderstorms—and it’s not ending anytime soon. If Continent-ravishing fires and rising sea levels will become the norm as long as corporations are allowed to continue at our current rate of consumption of greenhouse gasses. It’s an apocalyptic future, and it’s looming closer with each refusal by governments to shift policies, and each decision made by businesses to put profit above people, animals, and entire ecosystems.

Though research shows that climate change is not only real but continually getting worse due to human inaction, Australia’s Prime Minister Scott Morrison has been painting the fires as a natural disaster instead of a symptom of the climate crisis, launching an inquiry but ultimately denying the role that fossil fuels have played in the disaster. (When the fires began picking up speed in December 2019, Morrison was vacationing in Hawaii.) It wasn’t until two volunteer firefighters were killed that he cut his trip short, returned to Australia, and gave this charming quote: “I don’t hold a hose, mate, and I don’t sit in a control room. That’s the brave people who do that are doing that job. But I know that Australians would want me back at this time.” Australians, of course, heckled Morrison upon his return, greeting him with shouts of “You won’t be getting any votes down here, buddy,” and “You’re not welcome here.”

Morrison has been historically careless when it comes to safeguarding the environment. His election campaign hinged on the claim that only urbanites care about climate change and he’s explicitly supported the coal industry—he literally brought a lump of coal to Parliament—while shooting down taxes on carbon. Despite Paris Agreement promises to cut down emissions, Australia forged a loophole to disguise its actual emissions output and is still on track to become a major coal producer. As such, it’s in Morrison’s favor to refuse to link climate change to the exacerbation of the fires. By sticking to the argument that Australia’s global emissions are inconsequential, and that the bushfires aren’t a result of governmental mismanagement, Morrison is trivializing the deaths of those who couldn’t escape the smoke and fire. He’s disregarding thousands of people who’ve been forced to evacuate their homes. He’s endangering the lives of the elderly, the young, and the asthmatic in both the bush country and in major cities, as the smoke smothers Australia and continues to spread as far as New Zealand.

One man can control the climate of a country, but all world leaders must consider climate management as we make a beeline toward a 1.5 to 2 degree Celsius temperature increase. Besides prevention—which, granted, no developed country has pursued steadily and thoughtfully enough for us to avoid our current apocalyptic path—governments must carefully construct action plans in the event of floods, wildfires, droughts and other climate consequences. Australia has constructed neither a prevention plan an action plan: It took weeks for Morrison to come up with a plan and, even then, he forgot that two people died when he visited Kangaroo Island to announce an $11 million funding package to assist with rebuilding. Morrison’s reluctance to provide aid, claiming that it’s typically the individual state’s responsibility, sets a poor precedent for climate crisis response, much like George W. Bush’s clueless approach after Hurricane Katrina led to many more lost lives and slow rebuilding. Morrison’s insistence that Australia’s climate policies shouldn’t be changed because it only produces 1.3 percent of global emissions (that is, according to Morrison after his jury-rigging of carbon accounting), is short-sighted considering Australia’s goals for exporting coal.

A political leader’s inability to be empathetic while taking decisive action during a climate emergency should surely be a major talking point around the world, but it’s not. A lot of attention has been focused on the estimated one billion animals that have died during the wildfires. Videos of injured koalas and kangaroos are going viral on various social media platforms, which is great for raising awareness but still distracts from the cause of this ecological tragedy. Our preference for cute animal videos speaks to our inability to empathize with the millions of Australians, especially its Aboriginal population, who are choking on what should be clean air.. The only people holding Morrison accountable are Australians who, rightfully, refuse to shake his hand and perhaps maybe the teens who are roasting him on TikTok. Frankly, that doesn’t cut it. Not a single head of state has condemned Morrison for his inability to see how climate change exacerbated wildfire season.

Just as the U.S. news media quickly moved past covering the burning of the Amazon rainforest, it will forget about an entire continent being ablaze, perhaps because there are new dangers awaiting us. Politicians’ stubborn cowardice to see the consequences of climate change and enact policies to slow down its progress will ruin the livelihoods and health of many. It doesn’t have to be that way—but it can’t change without real, actionable commitment from politicians. 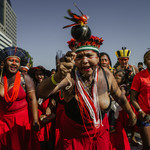 by Izzie Ramirez
The Amazon fires are another example of politicians prioritizing greed above caring for their constituents and protecting the people who inhabit the land they govern.