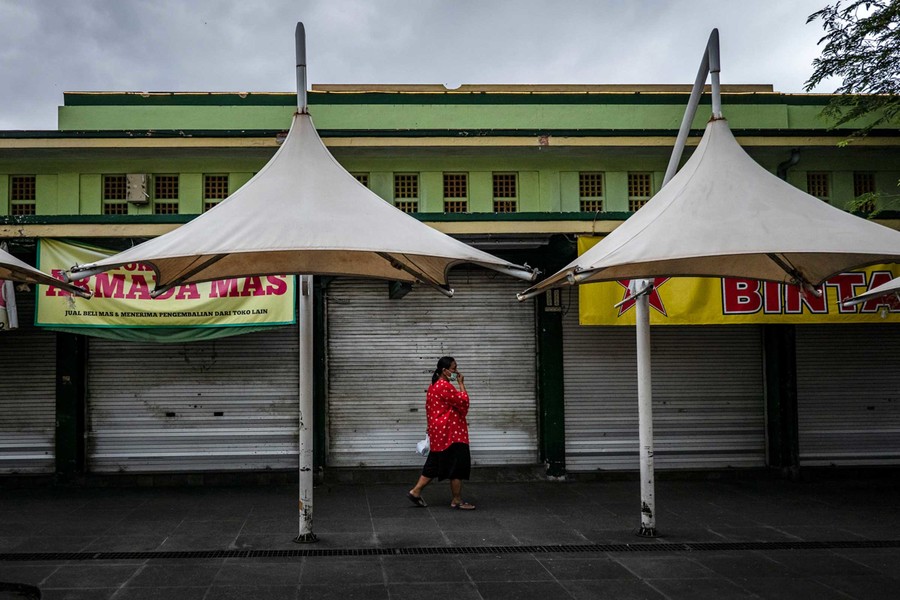 A woman wears a protective mask and walks at the nearly-empty Beringharjo market, a popular tourist attraction, due to the COVID-19 pandemic on March 24, 2020 in Yogyakarta, Indonesia. (Photo credit: Ulet Ifansasti/Getty Images)

In the past few months, thousands of people have died around the world from complications stemming from the coronavirus. Economies are on the brink of collapse, millions are facing layoffs and job insecurity, and if we don’t flatten the curve, it’s only going to get worse. As governments across the globe begin enforcing lockdowns and ordering residents to shelter in place to curb the spread of COVID-19, everyday life has been more or less brought to a halt: There’s no more rush-hour traffic, packed trains, or trash-rendering events. The resulting stillness has slashed down air pollution rates from Los Angeles to China, an unexpected benefit in the face of so many losses.

Naturally, some people are trying to focus on the good things, from viral-but-fake posts boasting about dolphins returning to Venice’s canals (now a meme) to the fact we’re finding ourselves with cleaner air. However, there’s a slippery slope when statements go beyond rejoicing the return to nature and begin justifying human deaths to preserve the environment. As climate activist Jamie Margolin put it in a tweet, saying,“‘the weak will die but it’s okay because it helps the climate’ is not climate justice. That is ecofascism.” Ecofascism is defined as governments exerting power to protect the environment at the cost of individual life.

In their 2019 article “Overpopulation Discourse: Patriarchy, Racism, and the Specter of Ecofascism,” Jordan Dyett and Cassidy explained that ecofascism began taking root in 19th and 20th century Germany when a “variety of ecological concerns began to interact with the xenophobia, nationalism, and racism present in the region.” At the time, German’s fascist authorities used to justify certain exclusionary policies by connecting the environment to health. Typical rhetoric included population control, anti-overpopulation measures, and notions that minority groups were an invasive species that were a threat to the environment itself. This is a common ideology for white supremacists, in particular, and those who commit mass shootings. For instance, the mass shooter responsible for killing a large number of people in El Paso, Texas, in 2019, cited environmental degradation as one of his motives. “If we can get rid of enough people, then our way of life can become more sustainable,” he wrote in his manifesto.

In today’s context, though, everyday people are arguing that COVID-19 is the earth’s vaccine against humans as the virus wreaks havoc around the world, killing thousands of people, many of whom are working-class, don’t have access to healthcare, and are forced to continue working because they’re considered essential employees. As it stands, ecofascism—as seen through these conversations on social media—is arguing that impoverished people, disabled people, and aging populations should sacrifice themselves in order for the rest of us to live. Not only is that morally reprehensible, but it’s a misunderstanding of the larger problem: Coronavirus isn’t a “detox” of the Earth; it’s a disruption of the systems powering capitalism.

Even if people seek to challenge capitalism, they’re forced to live within it because we have to survive in a capitalist economy that’s focused on immediate benefits, rather than future consequences. So people take the bus to their retail job; they drive to work in a factory; and they Uber and Lyft others around to make ends meet. These people don’t have many economic alternatives because they have mouths to feed and bills to pay. Their adherence to capitalism for survival’s sake doesn’t make them selfish or expendable. In fact, if you’re worried about climate change, these are the very people you should be concerned about.

They’re the people vulnerable to flooding, drought, and intensified storms, and are left behind by their employers, governments, and communities. It’s impossible to care for the environment without caring for the people who live in it. The quarantine is revealing class lines and the major differences between who is able to quarantine safely, and who is forced to work through the pandemic due to a lack of government funds being driven to individuals; even with the proposed stimulus funding, many would still financially struggle and be left to continue to work (if their jobs are still available) or end up on the streets as rental payments have yet to be frozen.

While individual people can help the environment in micro ways, it’s the federal government’s job to upheave the entire global system, making it more equitable and safe for those on the frontlines of this pandemic. “This really shouldn’t be seen as a silver lining,” Jill Baumgartner, an epidemiologist professor at McGill University, recently told the New York Times. “It’s not a sustainable way to reduce air pollution, and the long-term economic and well-being impacts of this crisis are going to be devastating for many people.” Ecofascism won’t slow the devastation of climate change, especially during a global pandemic. It’s cruel to suggest that we should allow people to die because a few rivers look cleaner in (fake) photos. Instead, we should use this time to evaluate what systems are absolutely necessary and how they can be better adapted for the climate crisis. We can build safety nets—paid leave, healthcare for all, universal childcare—so that we can really focus our energy on making the world a better place for everyone to live in.