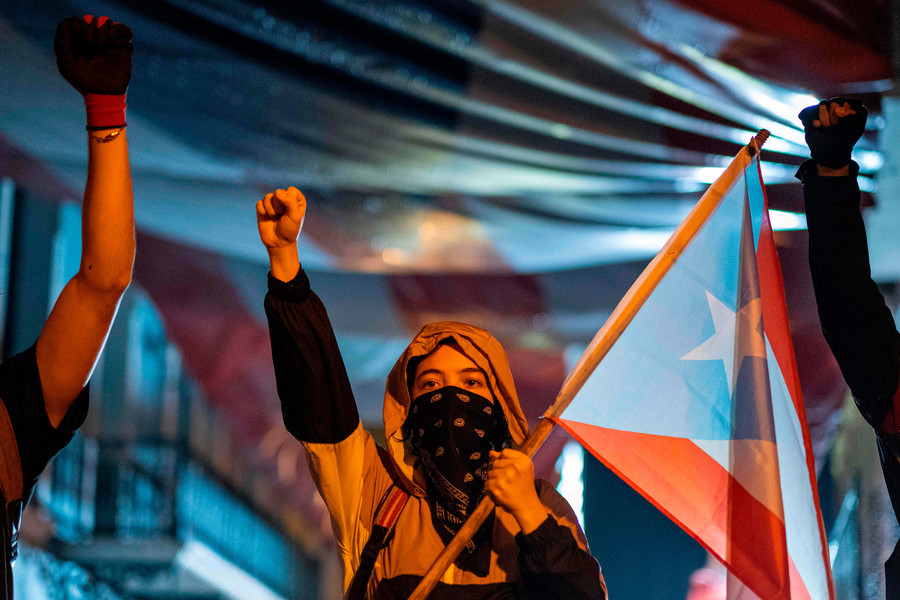 A young resident holds a flag in protest against Puerto Rico's governor and the government in front of the governor's mansion in San Juan, Puerto Rico, on January 23, 2020. (Photo credit: Ricardo Arduengo/AFP via Getty Images)

During the (rather failed) Iowa caucus, U.S. Senator Chris Murphy of Connecticut tweeted that his 11-year-old son “nearly had a heart attack” when he saw that healthcare, not climate change, was the number one issue among voters. “’It’s like the house is on fire and all people care about is doing renovations,’” Murphy’s son apparently complained. Famous authors and Twitter personalities alike shortly ratioed Murphy, with their replies highlighting how his son, given his father’s role, likely has insurance and, as such, does not have to worry about the absurdly high costs of access to healthcare. However, healthcare and environment are interrelated issues, especially as climate change threatens to exacerbate the health of those who are already vulnerable.

Our environment is integral to our existence. So much of health is dependent on what we’re exposed to and how. For instance, disease outbreak impacts will be amplified in areas that experience flooding, and there will be an increased likelihood of injury in places where natural disasters become more extreme and frequent. Whether it be drought fueling malnutrition or numbing cold intensifying asthma, the young, elderly, and poor will be disproportionately impacted by climate change. And without affordable and accessible healthcare, they will not be able to cope with an ever-changing environment. It’s not a stretch to say that private health insurance providers will likely capitalize on global health worsening because of climate change.

Look at how businesses are profiting from natural disasters, ushering in an era of “disaster capitalism”; if there’s a potential market, there’s a way. If we do not prioritize creating an equitable healthcare system, we are not only putting lives at risk in the immediate sense, but we are also normalizing injustice that will only get exponentially worse with climate change. The problems of healthcare need to be solved right now or people will continue dying. But, at the same time, the longer climate change is characterized as a looming, distant issue, the worse the consequences for us will be later on. (Not to mention, plenty of coastal communities and urban areas are already feeling the brunt of climate change impacts). Georges Benjamin, the executive director of American Public Health Association, clarified this relationship in an interview with The Atlantic, saying, “The way I think about it is: Somebody was made sick yesterday from climate change, someone is being made sick today as we speak, and someone is going to be made sick from climate change tomorrow.”

According to a review on a New England Journal of Medicine article that declared climate change as a “health emergency,” more than 250,000 people may die as a result of climate change–related health problems between 2030 and 2050, the World Health Organization estimates. That’s not too long from now. The lead author of the article and physician, Caren Solomon, explained her reasoning to Vox in January 2019. While her stance was that physicians and hospitals have to do more, the connection between climate and health remained. “We’re getting down to a point where people need to act immediately to try to prevent the most catastrophic consequences,” Solomon said.

Climate change and health go hand-in-hand, so it makes no sense to separate the two. Just as climate change adds pressure to other forms of inequality—racial and socioeconomic—it will widen the gap between those who have and those who do not. Currently, the Centers for Disease Control and Prevention has already identified 11 steps to take as climate and health merge, but these steps are focused on understanding the science better in order to better predict which areas and populations will be at the greater risk for climate change–related health issues. That’s a great first step, since climate change is not a blanket that will unilaterally affect everyone in the same way, but it’s still operating within the current system of privatized healthcare.

Relying on models will only get us so far; solving the healthcare problem is complicated, but will likely ease the burden on decision-makers when it comes to administering aid after a hurricane or flood. Money that would fund hospital stays could instead be used for managed retreat or rebuilding homes, for example. It’s easy to see climate change as a separate issue, especially when activists have painted it as such in the past. But we do not live apart from our environment. Murphy, his son, and their detractors weren’t entirely wrong, but pitting valid perspectives distracts us from collaborating and seeing how our lives are at stake in various insidious ways. Politicians need to start looking at climate as an issue that amplifies every other injustice. We need to build systems—from healthcare to housing to transportation—that will be equitable and withstand what the future may hold without bankrupting the most vulnerable. That includes healthcare.