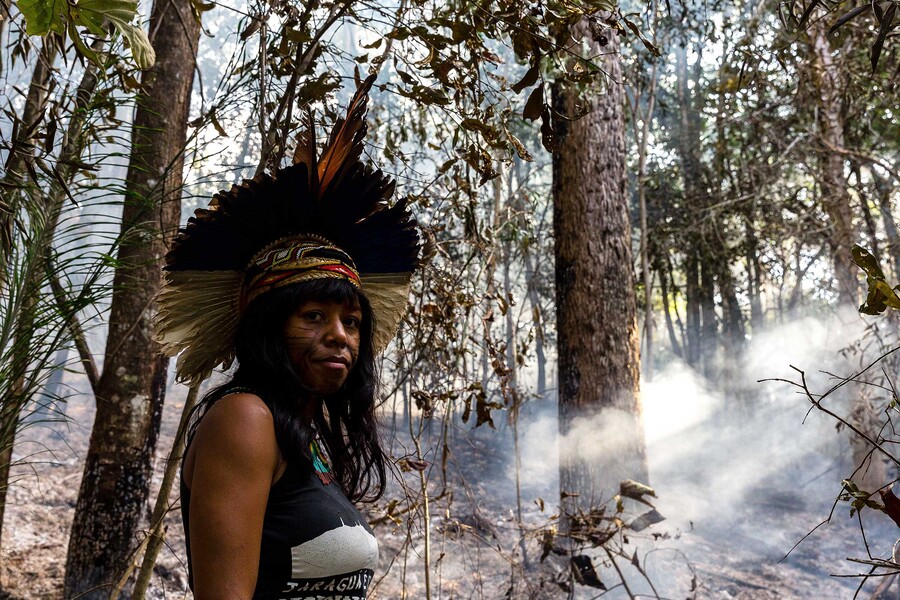 Tamikua Txihi stands in front of a burnt out forest area in Pico do Jaraguá, Brazil, the home of the Guarani Indigenous people, on June 22, 2020. The Guarani people organized themselves to contain the fire that broke out the previous Sunday. (Photo credit: Diego Baravelli/picture alliance via Getty Images)

No one deserves to live under post-apocalyptic skies, and yet millions on the West Coast woke up to a hazy, vermillion sky earlier this month as wildfires raged across acres of land. The result of the fires has been swift and dangerous, with the wildfires compromising air quality in the middle of a global pandemic. What got us to this moment was not only a combination of government mismanagement and an outright disregard for science, but also the capitalist desire for market-based solutions—and the active suppression of Indigenous ecological knowledge. For centuries, Indigenous peoples have cared for the land, the water, and the air that capitalism has stolen and polluted. Specifically in the West, tribes had the practice of setting low-grade, controlled fires in order to help clear away all the underbrush, which keeps wildfires alive and worsens the damage done.

These controlled fires also made certain species adaptable to fire by encouraging new growth as well as preventing brush from blocking waterways. However, when white colonizers began to settle in the West around 1800, they brought their fear of fire with them. “They didn’t understand fire in the sense of the tool that it could be to create and what it did to help generate and rejuvenate the land,” Ron Goode, tribal chairman of the North Fork Mono, said in a ceremony recorded by NPR. “So they brought in suppression.” Indigenous people were swiftly punished by the Californian government; some faced bounties, others were shot, and many were imprisoned. For the past 200 years, Indigenous people have been unable to carry out controlled burnings, leaving forests to overgrow. And that loss as well as denial of understanding and expertise has real impact, especially considering how long it took scientists to understand the environment in ways that Indigenous people, who made protecting the environment a part of their culture, long have.

Instead, the idea of climate change—which has its roots in 1824 when French scientist Joseph Fourier discovered the greenhouse effect (though the name came much later)—has taken decades for scientists to truly understand, mainly because scientific discovery and understanding is so incremental. For instance, Fourier knew that greenhouse gasses acted as a natural insulator and kept the planet warm enough to create the conditions for habitable life, but it was Svante Arrhenius who made the prediction in 1896 that an unnatural increase in CO2, created by burning fossil fuels, would create global warming. By the 1970s, scientists began detecting CO2 patterns that indicated that action needed to be taken to protect the environment. But, in the United States, several obstacles were in the way: the fossil fuel industry, a distaste for regulation, and a pervasive doubt that humans were not the cause behind what was then-called global warming.

Who controls the cultural understanding of the environment and climate change, and who has the resources to enact measures to protect the planet, matters. Earlier this year, I wrote about how the Australian government’s proclivity for the coal industry played a role in how extreme their fire season was. It can be argued that the United States is even more entranced by and willfully dependent upon fossil fuels. This affinity came from the fossil fuel industry itself, as it began laying the seeds of doubt in the ’70s. The industry wasn’t inventing the wheel; rather, it took a page out of the tobacco industry’s handbook by hiring contrarian scientists to create studies that made it seem as if climate change wasn’t real. Naomi Oreskes and Erik M. Conway’s 2010 book, Merchants of Doubt: How a Handful of Scientists Obscured the Truth on Issues from Tobacco Smoke to Global Warming, also noted that the fossil fuel industry hired conservative think tanks to lobby for their interests.

Through their puppets, the fossil fuel industry argued that climate change wasn’t caused by humans using fossil fuels and that environmental regulation and taxation infringed upon the American way of life. From there, politicians stepped in, swaying the public to believe their dependence on gas, oil, and coal is inextricable from their way of life. Conservatives treated the idea of the government protecting the environment as an overstep and made it seem as if the government was choosing to step on the toes of everyday people and businesses in the name of clean air and clean water. After latching onto climate denial, conservatives baked it into the party’s beliefs. Part ideological, part economic, the climate change debate permanently became politicized: According to a poll conducted by the Pew Research Center in 2016, only 15 percent of Republicans believe that climate change is caused by human actions, whereas 79 percent of Democrats do.

Abandoned by the government, Americans did what they do best, turning to individual actions and “market-based solutions” rather than relying on the federal government to regulate consumption. It was on us to recycle (another industry scam planted by the oil industry), bike instead of drive, and stop eating red meat. But our individual actions alone, of course, aren’t enough to curb climate change. “In terms of the market-based instruments, which provide great flexibility and financial incentives, they can spur producers to adopt the new technologies and facilities to pursue better results in order to solve the environmental problems,” Bei Zhang wrote in a 2012 edition of the Chinese Journal of Population Resources and Environment. “[T]he market-based solution is by far better placed to tackle environmental problems than other alternatives such as the command-and-control instruments.” But market-based solutions haven’t prevented fires on the West Coast or in Australia or the Amazon rainforest.

In the face of horrible climate trauma, those in power must be radical and imaginative.

So perhaps it’s time to revert to another solution that can pull us off the ledge we’re on: reinvesting in Indigenous stewardship or traditional ecological knowledge. Given the state of wildfires in the United States, Indigenous tribes, researchers, and activists have been calling for a return of responsibility to help restore the land, with Indigenous people at the forefront of decision-making. “Ignoring the important role that Indigenous people played, and in some areas, still play, further marginalizes these people,” ecologist Marc D. Abrams wrote in a recent Scientific American article. “It also hampers our ability to understand how to best manage vegetation against the invasion of unwanted species and future catastrophic fires, such as reducing fuels by forest thinning and restoring natural fire cycles with controlled burning.”

The U.S. government recognizes their folly too: The Forest Service has recently forged a partnership with the Karuk and Yurok tribes to help bring back controlled fires and other forms of traditional ecological knowledge that have been violently silenced for centuries. “There are solutions we have in our knowledge and in our management approaches that can help restore these ecosystems and can also benefit the public,” Frank K. Lake, a U.S. Forest Service research ecologist and a member of the Karuk tribe, told Grist. Going back to controlled fires will require some diligence and experimentation because of climate change, but we don’t have the privilege of sitting around and debating the existence of climate change or waiting around for a market-based solution. In the face of horrible climate trauma, those in power must be radical and imaginative, allowing for the return of Indigenous ecological practices and holding corporations accountable for their actions—or we risk every fire season giving us Blade Runner skies.