Can President Joe Biden Save the Environment From Trump? | Bitch Media

World on FireCan President Joe Biden Save the Environment? 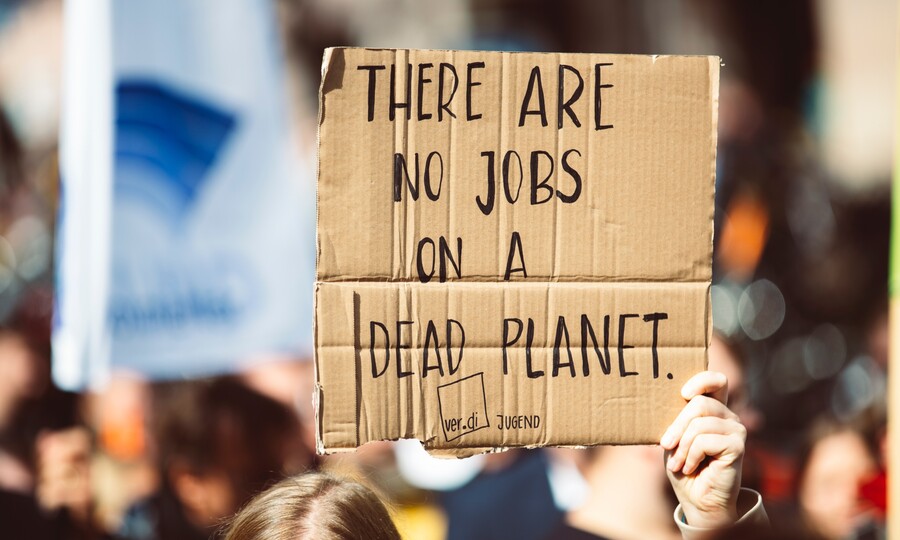 Photo by Markus Spiske on Unsplash

On January 20, the day when Joe Biden officially became the President of the United States, Biden signed “Protecting Public Health and the Environment and Restoring Science To Tackle the Climate Crisis,” one of 17 executive orders he signed on his first day in office. The swift round of orders—including canceling the controversial Keystone XL Pipeline and rejoining the Paris Climate Agreement—immediately showed Biden’s commitment to fighting climate change and reversing Donald Trump’s harmful policies. The Trump administration effectively rolled back legislation and defunded research designed to protect our ecosystems and our future on this planet. In four years, Trump—who, in 2012, famously said climate change was “created by and for the Chinese in order to make US manufacturing non-competitive”—deregulated environment and wildlife protections, shifted public lands away from conservation to a fracking free-for-all, and, most notably, exited the Paris Agreement.

Trump achieved several of these “accomplishments” through executive orders as well as appointing people to his cabinet and to the Supreme Court who focused on big business’ rights rather than the rights of those impacted by harmful policies. He continued to barrel through his lame duck presidency, with his words and actions spurring someone to inscribe “Trump” onto the algae on a manatee’s back, a symbol of the nonsensical and yet vile stance of Trump and his supporters’ relationship with the world around us. On the flipside, Biden said of climate change on Wednesday, “We can’t wait any longer … We see with our own eyes. We know it in our bones. It is time to act.″

If Biden’s first week in office is any indication, his administration will undeniably define the United States’ plight in the global battle against climate change. Now, as we look ahead at 2021, we’re wondering what Biden’s administration can—and must—accomplish to protect the environment and dig us out of the hole that Trump’s anti-science policies left us in. Like an oil spill sprawling across the waters and polluting everything in its wake, the Biden administration will need to quickly remediate the damage done since 2017 while also ensuring that will never happen again.

While misinformation abounds on social media, with more and more Trump supporters shifting to conspiracy websites and platforms created specifically for conservatism (and racism), the Biden transition team has already taken the first step to signal that science and research matters. In December, Biden designated Gina McCarthy, the president and CEO of the Natural Resources Defense Council, as the White House’s domestic “climate czar,” filling a position that has been empty for nearly a decade (although, at the time, the title was “energy coordinator,” according to Grist’s Shanon Osaka). Biden has also nominated former Secretary of State John Kerry as the special envoy for climate change and Representative Deb Haaland as the first Indigenous Secretary of the Interior. The Biden administration has also announced new appointments for the Office of Science and Technology Policy. “These are all very, very important appointments that signal that there will be a whole of government approach to addressing the climate challenge,” Rachel Cleetus, Ph,D, the climate and energy program policy director for the Union of Concerned Scientists, tells Bitch. “Because what’s happened in the last four years through this assault on science is that it affects real people. It’s not just about some abstract technical thing in a lab somewhere.”

It’s a good and necessary thing that Biden is beginning to make these strides in the fight against climate change because a lot must be done. Within the next few years, greenhouse gas emissions must be reduced significantly—through a combination of new policies, regulations, and innovations—in order to limit global warming to 2 degrees Celsius (that is, 2 degrees above pre-industrial temperatures). That’s on top of other goals like transitioning to a clean energy grid and creating green jobs for those whose field is no longer economically or environmentally feasible, a move that could help shift Republican voters to the left. But the Biden administration will likely encounter a few roadblocks: Some liberals have become loud and insistent about “unifying the country,” which is less about recovering from the violence wrought by the Trump administration and the politicians who supported it, and more about demanding that those who were most harmed by it simply move forward. This current definition of unity disregards the fact that ”decency, science, and truth” have all been muddied and heavily disputed by QAnon-supporting Republicans as well as other conservatives like Ted Cruz.

“Unity” doesn’t even begin to account for the Trump administration’s intentional deprioritizing of science through slashing budgets and dismissing science that didn’t fit with his worldview, following a decades-long mission to discredit climate science. This, of course, impacted marginalized people in extremely targeted and violent ways given the nature of environmental racism. In short, the Biden administration must be ready to dig its heels in and fight against the Democrats’ instinct to move to the center in favor of a warped idea of civility. This starts with prioritizing research and shifting the culture around science as it was damaged by Republicans. According to Romany Webb, a senior fellow at Columbia’s Sabin Center for Climate Change Law who maintains the silencing science tracker, it is much harder to justify new regulations without sufficient and quality research, not just from a legal perspective but also among the general public. “If people start questioning the science around climate change or other environmental issues, then they start questioning the need for regulations to address those problems,” Webb says. “It’s not just abandonment of science, but the really overt, strong attacks on science that we’ve seen during the Trump administration have been incredibly concerning in that respect.”

As Biden’s first 100 days of office continues, Cleetus says there are plenty of changes that can be done rather swiftly within the power of the executive authorities. . These changes range from “announcing fines [for polluters] and following climate goals [to] committing the United States to not just net zero emissions well before 2050, but also to have goals at least 50 percent below 2005 levels by 2030.” “The political realities will continue to be challenging,” Cleetus continues. “They can’t be waved away with a magic wand overnight. They have a deeply partisan Congress, a very closely divided and new Congress, ahead.”

Whatever initiatives cannot be done through the executive office will be left to Congress and the Supreme Court. While the Supreme Court has a 6-3 conservative majority, we’re finding hope in Congress. With the two shiny new seats from Georgia, the Democrats now narrowly control the Senate, allowing for progress with climate and environment legislation. Over the past four years, that type of work has been left up to the states, which of course has had some mixed results. However, it’s uncertain how much will be accomplished through Congress, even with control of the House and Senate. Democrats have to hold strong, to center the fight against climate change, and to refuse to cater to anti-science conservatives.

Of course, the Biden administration isn’t the only force in this fight. Environmental justice activists are pushing for more immediate action now. Lily Gardner, a youth climate strike coalition representative for Sunrise Movement, says that it’s not enough to just focus on environment or climate policy, but that the Biden administration must provide direct relief to the people and focus on the Green New Deal (which is not a specific set of policies yet). “We can facilitate a historic green recovery in the wake of the economic recession, the pandemic, and also put a halt to the climate crisis in the same kind of swath of policy,” Gardner says. “Democrats who now hold the majority need to keep their promises and do their duty. And there’s really no excuse for them to not support passing sweeping climate legislation as they previously promised. Biden has a moral imperative to lead the charge. And frankly, they need to do better.”

Any kind of climate or environment policy will undoubtedly take time to garner support for, Gardner, who grew up in Appalachia, says, but that’s because politicians and activists are not meeting people where they are. “I’m not connecting about a far off concept about climate change,” Gardner says. “Sometimes we just need to get out of our heads and out of the policy and think about what it means for real people and real communities. And that’s how we connect with people.” For many of us, Biden was a compromise; now, it’s time to push him. He’s begun to prove himself with his steps toward protecting the environment, but climate change and environment policy are not enough alone. He, along with Congress, must set the groundwork for a livable wage (more than $15/hour), create green jobs for those in the fossil fuel industry, shift our current food system to a more sustainable one, fund clean energy research, pass recurring COVID-19 stimulus checks, and rectify the sins of environmental racism. “This is no time for excuses, no time for inaction,” Cleetus says. “We have multiple crises colliding right now in our country: COVID-19, the economic crisis, the climate crisis, this crisis of racism. And they all require urgent action. This is a moment to be bold, ambitious and just.”