World on FireAs COVID-19 Spreads, So Do Stereotypes about the South 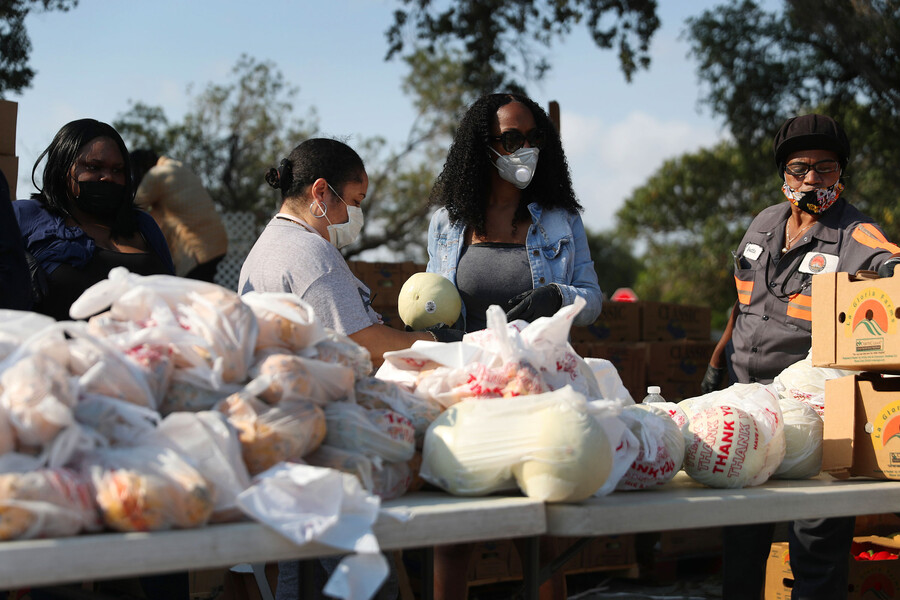 City of Opa-locka employees and volunteers prepare bags of food, provided by the food bank Feeding South Florida, to be given out to the needy at a drive-thru distribution site on April 14, 2020 in Opa-locka, Florida. Feeding South Florida has seen a 600 percent increase in those asking for food aid as people, some of whom have lost jobs, need to make ends meet during the coronavirus pandemic. (Photo credit: Joe Raedle/Getty Images)

When I graduated high school, I swore I would never return to Texas if I could help it, thinking that the South was an amalgamation of the worst in society. I naively believed I could escape racism, sexism, and classism by moving north, but they followed me to New York anyway. It’s been three years since I left Texas, and in the time since, I realized that the South was more complicated than my own experience—that my fellow communities of color have withstood so much and created so much beautiful culture. But not everyone is as willing to give the South the benefit of the doubt and to recognize the region’s diversity and value.

As I watch COVID-19 ravage the South, I feel like this is the moment where I should be there for them most, and it hurts me that I can’t physically be there to help. I ache when I hear stories from my mom, who now lives in Florida, where cases have topped 57,000, and Tennessee, where my dad lives, which has more than 21,000 cases. What I can do, though, is take note of how many northerners are readily dismissing the need to help the South because of the politics of the supposed political majority. It happened in 2017 when people joked that Texans deserved to drown after Hurricane Harvey hit Texas, with major damage occurring in Houston. It happened during the 2018 midterm elections when friends said people in the South shouldn’t be allowed to vote because they’ll vote for Republicans (as if voters of color don’t regularly face voter suppression that feeds into the idea that Southerners are Republicans). Now, this mocking of the South as backward and lesser is happening once again as the coronavirus sweeps through the country, killing hundreds of thousands.

White liberals in the North love to espouse their morals and how much they love brown people (especially our food!), except for when those brown people live somewhere they don’t like. Then it’s inconvenient. I’ll tell you what’s inconvenient: thousands of New Yorkers fleeing the city to rural and beach communities in the South, thus spurring outbreaks in towns that don’t have enough hospital beds and don’t have the resources to test their entire population. While stereotypes that exist both in politics and in pop culture encourage the idea that the South is full of little more than racist, homophobic white people, 55 percent of the country’s Black population resides in the South, according to the 2010 Census, and they’re four times more likely to die from COVID-19 (this comes as no surprise, given that doctors carry their racial bias into their practice).

In 2017, a report from the Office of Minority Health found that the states with the largest Hispanic populations were California, Texas, Florida, New York, Illinois, Arizona, New Jersey, Colorado, New Mexico, and Georgia, with the majority of these states being in the south; Latinx people have higher rates of COVID-19 infection. And the South is often considered the “epicenter” for health inequities in the United States because of higher rates of chronic conditions such as high blood pressure, diabetes, and kidney disease resulting from the aforementioned lack of resources and the food deserts that are prevalent in rural areas.

The argument that the pandemic will cleanse the country of the ills of the South isn’t dissimilar to the ecofascist idea that the pandemic is curing the planet of human beings. People aren’t bad for the planet; capitalism is, and Southerners aren’t bad for the United States; they’re an increasingly diverse population that has been abandoned by both the federal government and the rest of the country time and time again.

The rhetoric folks use when talking about the South has got to stop. It’s absurd to devalue someone’s life because of where they live and because of the politics of the majority (or a really loud minority). These are people who the federal and state governments have failed, from lower minimum wage rates to insurance coverage, and they don’t deserve to die because of government inaction. And just because the curve is beginning to flatten in New York thanks to social distancing measures doesn’t mean the fight against the coronavirus isn’t over. Dallas, Houston, southern Florida, and all of Alabama are at risk of a second wave of coronavirus infections. Georgia has already seen a spike of cases after Governor Brian Kemp reopened the state. The Black residents of New Orleans, who are still recovering from the tragedy of Hurricane Katrina, are bracing themselves for even more death. “The South has the perfect storm of characteristics to just be a tragic region in terms of the Covid outbreak,” Thomas LaVeist, dean of public health and tropical medicine at Tulane University, told the Guardian.

While the supposedly liberal, open-minded people of New York City are given a free pass to lounge in parks in the name of self-care, those in southern states who attempt to do the same are mocked for their imagined ignorance and disregard for their health, and the health of those around them. But we know that the sense of community and family in the South is one of its powers, and if we’d look at things from another perspective, the powers that be and the rhetoric surrounding Southerners could instead discover a way to use this power to heal the South during this pandemic, rather than to mock it.