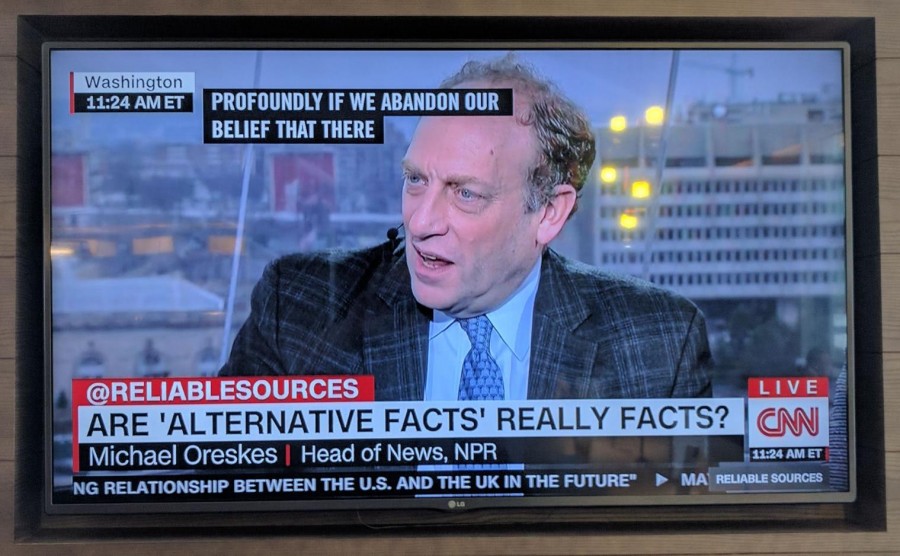 Last week, National Public Radio released a statement explaining why the company’s news and culture programming would not use the word “lie” to refer to the various fabrications, untruths, and “alternative facts” issuing from every corner of the Trump administration. The reasoning was, according to reporter Mary Louise Kelly, that though something like, say, Trump’s claim that the media was at fault for putting him at odds with the intelligence community is “provably not true,” using the word “lie” infers that he had intent to deceive. Kelly busted out the dictionary for backup, noting that “Without the ability to peer into Donald Trump’s head, I can’t tell you what his intent was.”

Several days later, Lewis Wallace, a reporter for American Public Media’s Marketplace and a transgender man, was fired after publishing a post on his personal blog about the responsibility of journalists to reconsider “neutrality” in an aggressively postfactual era. “Many of the journalists who’ve told the truth in key historical moments have been outliers and members of an opposition, here and in other countries,” he wrote. “And right now, as norms of government shift toward a ‘post-fact’ framework, I’d argue that any journalist invested in factual reporting can no longer remain neutral.”

Obviously, there’s no shortage of things to be alarmed about in the 14 days since Donald J. Trump took the oath of office in front of an unusually small crowd, but the question of how to report, broadcast, and process news is more pressing than ever. Steve Bannon, noted white nationalist and Trump’s chief strategist, said in a January 26 New York Times article that the media is “the opposition party” and “should keep its mouth shut and just listen for a while”; the chairman of the House Science, Space, and Technology Committee, meanwhile, suggested that people get their news from the president rather than the media. Both of these comments bypass red flags and go straight to screaming Klaxon horns—and yet the words that too many outlets use, and the clinging appeals to “neutrality,” are veering toward appeasement of a totalitarian regime.

The role of journalists and journalism in the Trump era has been debated since before entering a Trump era became a possibility. But the hands-off policy on the word “lie” from news organizations like NPR and the Wall Street Journal is a little newer. During the 2016 campaign, both Hillary Clinton and Trump were treated to a wealth of news and opinion pieces that freely called them liars, from the Chicago Tribune (“If Hillary Clinton wins, more scandals and lies to come”) to the New York Times (“The Lying Game”) to Vanity Fair (“Why It’s Pointless to Fact-Check Donald Trump”). And if Trump has made anything great again, it’s fact-checking, which over the past year has gone from necessary journalistic practice to full-on performative spectacle.

It’s not that NPR, among many other outlets, hasn’t been diligent in calling out things that are lies: From fact-checking his inauguration speech to publishing a column called “This Week in Trump’s ‘Alternative Facts,’” NPR has been on it. But NPR has also portrayed the word “lie” as politicized, and thus polarizing, turning a word that has no inherent political affiliation into a hot potato. (Per Michael Oreskes, NPR’s senior vice president of news: “I think the minute you start branding things with a word like ‘lie,’ you push people away from you.”)

On the flip side is Lewis Wallace’s story, which involves the desire of news and culture outlets to cling to the myth that objectivity and neutrality should always be the central feature of journalism. The crux of Wallace’s story was that mainstream news media’s past appeals to both-sides objectivity becomes irrevocably lopsided when one side is, say, arguing against the other side’s right to exist as U.S. citizens. It should not be controversial to write, as Wallace did, “We need to admit that those who oppose free speech, diversity, and kindergarten-level fairness are our enemies.”

Marketplace, a show that covers trends and stories in business, technology, and economics, generally only covers politics as it intersects with those subjects. But, as with many cultural products that depend on advertising or sponsorship, it is inextricable from politics. So how does Marketplace’s code of ethics, which states that reporters “must keep their political views private” square with its fiscal dependence on sponsorships from organizations that, well, don’t? (Notably, one of Marketplace’s past sponsors is Koch Industries, the multinational corporation run by billionaire brothers Charles and David Koch—whose outsized financial influence has been widely credited with shaping the Tea Partying, antiregulatory, climate change–denying political landscape of the past decade.)

There is something stubborn and pedantic about these rationalizations, as though it’s possible to staunch the bleeding out of truth by pointing to dictionary definitions and best practices. As though Trump’s entire presidential campaign wasn’t the direct result of an intentional, racist lie about Barack Obama’s birthplace that was disseminated, repeatedly, in some of the same outlets that are now worried about using the word. It shouldn’t be considered brave or maverick to call a lie what it is or to admit that objectivity in journalism is kinda compromised when the president of the United States is a proven liar who dismisses anything that portrays him unfavorably as “fake news.”

It’s not entirely bleak out there in the mainstream news organs. Margaret Sullivan, the former New York Times ombudsperson, busted out the word “lie” in paragraph two of her January 23 Washington Post column, noting that Trump “cares enough about [ratings] to send his press secretary, Sean Spicer, out to brazenly lie to the media in his first official briefing.” And she was right to do so, because those words accurately describe what Spicer did when he threw on his flame-retardant pants to state that Trump’s inauguration drew the “largest audience to ever witness an inauguration—period—both in person and around the globe.” And bless Dan Rather, who, in what may be the Most Dan Rather Thing Ever, wrote in a Facebook post that “We are being confronted by versions of what are claimed to be ‘the truth’ that resemble something spewed out by a fertilizer-spreader in a wind tunnel.”

This is not a great time for rhetorical purity. This is a time when lies, actual lies, are threatening people’s lives, uprooting their families, and denying their humanity. That said, we’re going to need a lot of synonyms in the coming months, so I’m also all for “falsehoods,” “fabulism,” “deliberately untrue statements,” “haphazardly invented word salad,” “whoppers,” “baloney,” and “steaming piles of bullshit.” Bannon wants the media to keep its mouth shut to serve his administration’s agenda, but if the media wants to be on the right side of what is shaping up to be dark history, it should use all its words and call a lie a lie.

by Amy Lam
Equal pay day highlights the pay disparity between women and men, and here are five must-know facts about the wage gap.