The Year in Black Girl Magic 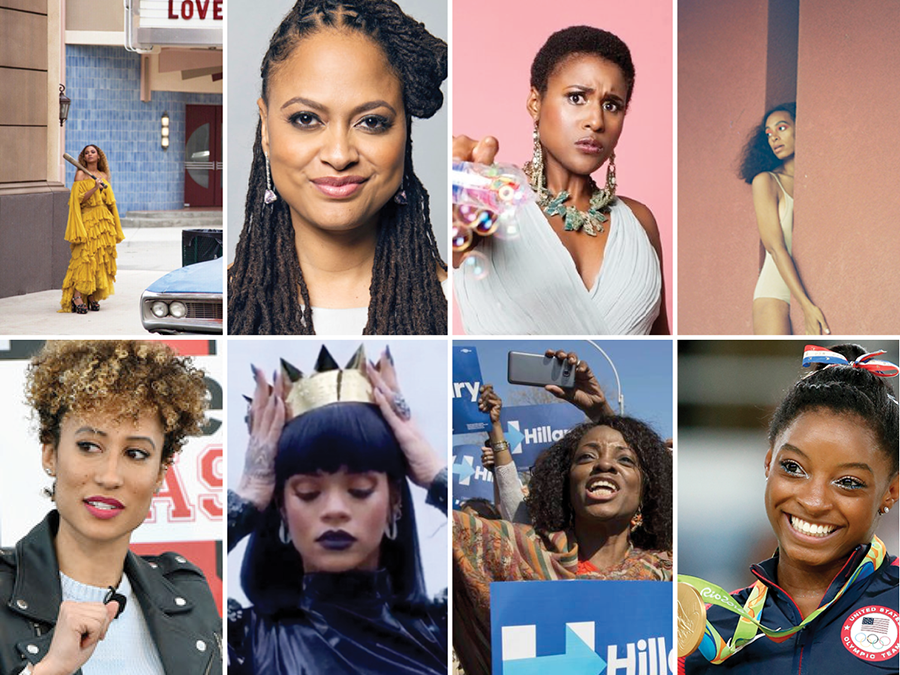 Our political divides are greater than ever, but one thing many of us can agree on is that 2016 was a raging dumpster fire of bigotry and ill will, and we wish it had never happened. From losing Prince to losing the election to the Orange Orangutan, it hasn’t been a great year for anyone who isn’t a straight, white, able-bodied man of means. But luckily, there were bright spots along the way to save us from despair. Everything is terrible, but Black women stepped up to keep the ship from capsizing by creating art, speaking out politically, and generally being excellent. It was the year Black girl magic went mainstream—because we needed a little light in the darkness.

BEYONCÉ TOOK LEMONS AND MADE LEMONADE

Beyoncé’s second visual album dropped in spectacular fashion on HBO in April. Preceded by the deeply political track “Formation”—released the day before the Super Bowl and performed at the halftime show—Lemonade is a cinematic work of art that lovingly speaks to the millions of Black women that, as Beyoncé clearly knows, look to her for comfort, validation, and affirmation. The hour-long magnum opus, narrated with poetry written by U.K. poet Warsan Shire, examines the pain so many Black women experience but rarely have acknowledged. When online discussion of the album was momentarily derailed by white women’s fascination with the Beckys of lore and cries that “Becky” itself is a slur, it was a Black woman who reminded white women that it is not a privilege to be denigrated. The album was a flashpoint for examining all the ways Black women are erased from the stories of their own lives.

AVA GAVE US SUGAR AND JUSTICE

From the premiere of Queen Sugar, executive produced with Oprah Winfrey, to her groundbreaking documentary 13TH, about the legal loophole in the 13th Amendment that paved the way for mass incarceration, to starting work on the motion picture adaptation of beloved classic A Wrinkle in Time, Ava DuVernay had a banner year in 2016. DuVernay has also emerged as an outspoken critic of the lack of diversity in the current Hollywood system and has gone one step further than her counterparts by putting her money where her mouth is: Every single director on Queen Sugar’s first season was a woman, a trend she plans to continue and one that has already encouraged other showrunners to do the same. DuVernay has prioritized making art that helps bend the arc of the universe toward justice.

ISSA RAE ALLOWED US TO BE INSECURE

Issa Rae’s long-delayed show Insecure made her the first Black woman to write, produce, and star in an HBO original series. And like DuVernay before her, she populated her crew with female talent, including director (and frequent Beyoncé collaborator) Melina Matsoukas. Insecure’s eight-episode first season was critically acclaimed and immediately found an audience with millions of Black millennials who finally saw the realities of their lives and relationships depicted onscreen. Rae described Insecure as like “the prequel to #BlackGirlMagic,” and with the show, she created a mold for those of us who don’t see ourselves reflected in the high-powered Black women of primetime and who longed for the familiar dysfunction of Mara Brock Akil’s Girlfriends instead. In Insecure, Black women make mistakes, suck at their jobs, and neglect their relationships, and then they learn to figure it out.

SOLANGE GAVE US A SEAT AT THE TABLE

Pitchfork’s best album of the year, A Seat at the Table, came late in the year, but at exactly the right time. Like her big sister before her, Solange validated the anger and weariness of existing while Black and the psychic exhaustion it can bring. The breezy tracks explored the totality of Blackness in a way that not even her sister Beyoncé managed. On the album, she speaks not just for Black women, but for Black men too. Standout tracks like “F.U.B.U.” and “Mad” explore the way it feels to have one’s Blackness invalidated and yet hyperconsumed—not good enough to reward outright, but ideally suited to white theft. “I’m tired of explaining/ Man this shit is draining/ But I’m not really allowed to be mad,” she croons, a ballad for anger tamped down by stereotype threat and white supremacy.

ELAINE WELTEROTH MADE TEEN VOGUE THE VOICE OF A MOVEMENT

In 2016, Teen Vogue named Elaine Welteroth its new editor-in-chief. Welteroth is the first Black woman to hold the position, and the shift in the magazine and website’s editorial tone was almost immediately noticeable. While it still covers the comings and goings of the Jenners and Hadids and the best moisturizers for dry skin, it’s added political commentary on the election and reported in straightforward terms on the effects of TRAP laws and “bathroom bills,” the necessity of the Black Lives Matter movement, and the protests at Standing Rock. Establishment white male journalists balked at the sudden gravitas of the tone, but as fellow teen magazine editor Tavi Gevinson succinctly said on Twitter, “Why should it be shocking that mainstream pubs reckoning w/accountability culture & the rising currency of feminism are suddenly feminist?” The key, according to Welteroth and digital editor Phillip Picardi, is letting teenage girls tell their own stories of how political issues affect their lives.

After three years, several false starts, and a handful of dropped singles, ANTI—dubbed “R8” by her standom the “Navy” (so named for her small turn in 2012’s Battleship) before its release, dropped for free on Tidal in January. Instead of the expected pop bangers, ANTI is full of brash alternative tracks, a different sound from the chart-topper that indicated new artistic and economic freedoms. As Jenna Wortham wrote in the New York Times, “Rihanna has made a record that does not need to make much money, neither for herself nor for a label.” Rihanna’s album was the cumulative result of the kind of financial and creative freedom Black women dream of acquiring but seldom have access to. In a way, Rihanna was a vision of what we could be when we are truly free.

BLACK WOMEN TRIED TO SAVE US FROM TRUMP

According to polls,, Black women were the single demographic that voted most unanimously for Hillary Clinton at 94 percent. While their valiant efforts weren’t supported (*glares at 53 percent of white women*), the data shows what most of us have always known: Come hell or high water (or Trump), Black women will always make the practical choice, even if it means putting up with white feminist fictions of liberation politics. They predicted the disaster of Trump’s America and tried to steer us back on track.

Of course, a year-end list could never fully encapsulate the multitude of ways in which Black women displayed their excellence in 2016. From Simone Biles sweeping the Olympics to Black actresses like Tracee Ellis Ross and Viola Davis finally getting the awards recognition they deserve, it’s clear that Black women have long known how to thrive when the odds are against us. The next four (or eight) years might mean more hardship on the horizon as we battle against both literal neo-Nazis, and smaller, more personal dangers like domestic violence and street harassment. But as 2017 draws near, Black women always know they can rely on Black women, and it’s that kinship that will get us to liberation.