Yola Is the Unconventional Queen of Country Soul | Bitch Media

Yola Is the Unconventional Queen of Country Soul 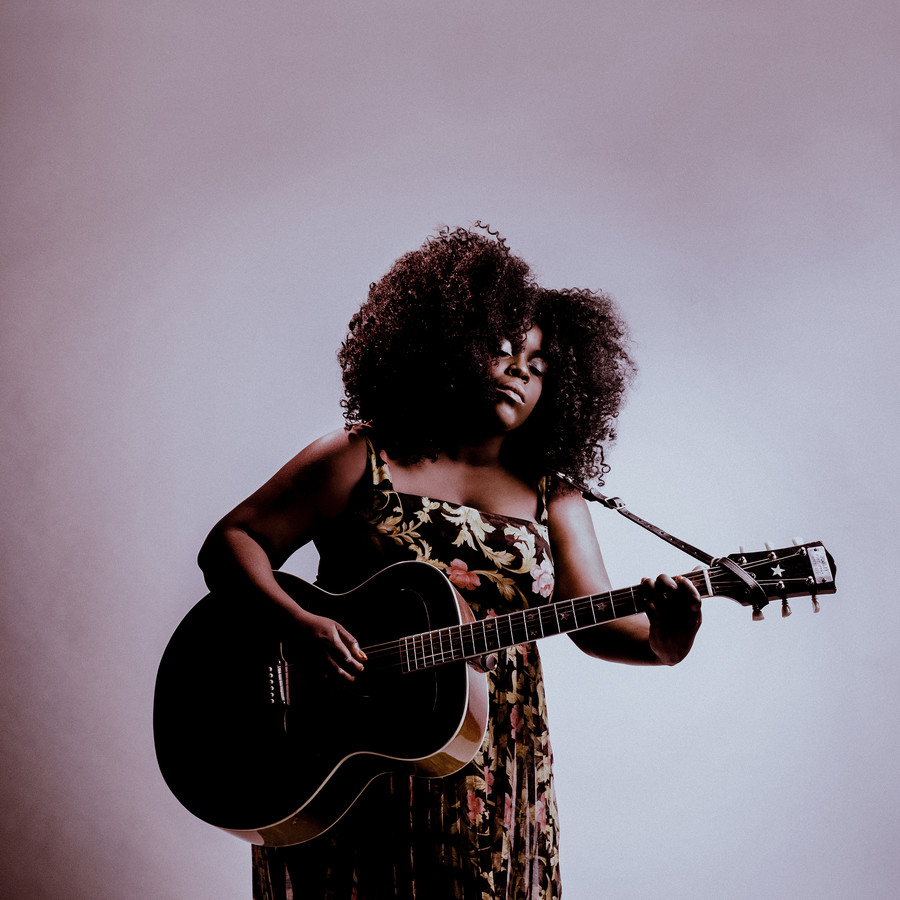 Country music has long been considered the domain of white male artists from Southern states within the United States, but that has never been the case. People from marginalized communities, including queer musicians and musicians of color, have long been a part of the genre, bending its expectations and expanding its reach. Dr. Dina Bennett, senior curator at the National Museum of African American Music in Nashville, told the Washington Post in 2019 that “country music can trace its roots back to 17th-century slave ships, where captors made Africans bring instruments from their homeland.” “They would have them perform and play the instruments…to exercise them,” Bennett said. “That was called ‘dancing the slaves.’” Southern Black Americans, many of whom were enslaved, created the banjo—an integral instrument for country music artists—in the 1690s, and they also played the fiddle at the behest of plantation owners.

“The fiddle was the primary instrument for dance music among a lot of classes of people in the 18th and 19th centuries,” Paul Wells, director of the Center for Popular Music at Middle Tennessee State University, told the Chicago Tribune in 1998. “If you had a bunch of guys getting rowdy in a tavern, they could have been dancing to a fiddle played by a Black person. If there was a fancy dance on the plantation, the musicians likely were slaves.” Despite this history—including DeFord Bailey joining the Grand Old Opry in the 1920s—and a lineage of Black artists, including Charley Pride, Aaron Neville, Tina Turner, and Ray Charles, incorporating country into their catalogues of expansive music, the country music establishment, including festivals, the Billboard charts,  and even the Grammys, have long resisted inclusion.

Most famously, Billboard removed Lil Nas X’s 2018 hit song “Old Town Road” from its Hot Country Songs chart in March 2019 because they claimed it didn’t “embrace enough elements of today’s country music to chart in its current version.” (Eventually, Billy Ray Cyrus joined Lil Nas X for a remix of the song, which eventually became the longest charting number one song in Billboard history.) But Lil Nas X isn’t the only artist to have faced this kind of exclusion from the country music establishment: The Grammys’ country music committee rejected Beyoncé’s 2016 song “Daddy Lessons” from being considered in the Best Country Song category, though she performed the song alongside the Dixie Chicks at the Country Music Association Awards. “It doesn’t sound like a country song to me,” wrote Alison Bonaguro in a 2016 article for Country Music Television’s website. “She didn’t cut it at a studio in Tennessee, and it certainly wasn’t written by a group of Nashville songwriters.”

Despite these obstacles, Black artists from all around the world are continuing the tradition of upending the expectation that country music is a genre reserved for white artists. Yola, the Black British “queen of country soul,” isn’t considered a traditional country artist. But after joining the Highwomen, a supergroup of women country artists, and releasing the Grammy-nominated album Walk Through Fire, Yola has cemented herself as the future of country—and every other genre she taps into. Yola sings about heartbreak, losing and finding herself, and a number of other life experiences that seem inherently country, but she also has a voice that’s unmistakably soulful, making her a genreless artist who is singing what feels true to her heart and her ear. Bitch spoke to Yola about how she’s navigated country music, the importance of expanding the boundaries of the genre, and what inspires her to write such soulful music.

How did you develop such a unique ear for music?

I’ve always been musical. I don’t have a living memory of not singing, dancing, or trying to create music. Music as a form of expression came very quickly, and it stayed with me. I was somewhat geographically isolated from other people of color, peers, [and other minority] cultures [in Britain], so there weren’t many role models who looked like me. Music led to a sense of identity. I ended up developing musically in the underground scene of Bristol, singing jazz gigs, going to theater groups, and [doing] anything I could to further my music. That made me genreless.

It often feels as if artists are not encouraged to be genreless. Have you felt supported in traversing multiple genres?

I do now, but if we’re talking about the past tense, then certainly not. People [are] pigeonholed because they’re [not] understood; it’s easier to allow someone to be genreless if you understand them on a basic level. If you’re from a minority [group], then you may find that people are struggling to understand you and it becomes harder to express yourself outside the confines of strict genre descriptions. The way people will be looking to market you will [also] be narrow. I had to fight for the right to [perform] the genres of music I’m interested in. Everyone expected me to be soulful, but everyone didn’t expect me to be influenced by country [music].

As I’ve been listening to more of your music, including “I Don’t Wanna Lie” and “It Ain’t Easier,” it seems that you’ve tapped into the country tradition of singing about resilience in the face of losses of all kinds. What inspires you as you write?

If you tell me a story about life, it’s going to end up in a song. So don’t tell me shit! I take from what I see as much as I take from my own experience, so it’s endlessly important that I interact with people as much as I write autobiographically about my own life experience. Like this record’s very much about a past integer of oneself more than it is who I am. A lot of the time I could be writing with this sense of wanting to explore something—be it present or in hindsight—that I might not have had the opportunity to explore.

You are constantly touring, performing live at festivals all around the world. How do live performances help shape your artistry? What is the best part for you about being on stage?

Performing live is such a big part of my arsenal. Without it, I find myself not knowing how I want to grow a project. After I write something, I’m then looking to understand what it is through performing it, how I interact with it by performing it. When you’re  emotionally present in the process of performance, there’s a potential for [songs] to take on not just a new meaning but a new intensity. So every time I’m performing, I’m reengaging with the work to see what it means today. And it’s not always the same thing every day.

The Highwomen is a revolutionary country supergroup of women. How did you become a part of the Highwomen? What has been the best part about being a part of a group of this magnitude?

I got a call from Brandi [Carlile], who’d been listening with Natalie [Hemby] to one of my records. They [invited me to] come in and record with them. Carlile was talking about people not respecting the output of women in country music and this project having a real [opportunity] to change that narrative. I couldn’t help but be on board with that. I’m continually meeting people through the Highwomen who are on the same page, on an emotional and political level, with regards to what we need to be doing within country music; it’s a mission for literally anybody who’s not a white guy. I connect with it for so many reasons, and specifically because [I am] a woman and a person of color.

Yola sings about heartbreak, losing and finding herself, and a number of other life experiences that seem inherently country, but she also has a voice that’s unmistakably soulful.

Country is seemingly undergoing a revolution, centering more revolutionary voices. What is factoring into country’s willingness to make space for different kinds of people and voices?

I’m not entirely sure why it’s now; maybe it’s because the appeal and the popularity of country music has been spreading in recent years outside of the United States. I can say quite confidently that the progress of country music in the United Kingdom has meant that lots of people that aren’t from America are being exposed to the music. And similarly, there’s a greater community of people who don’t necessarily have the same kind of hang-ups. They’re coming from different backgrounds all over the world, so it’s really important to recognize that it’s not just an internal force or [the] willingness of people from the United States to open up to people of marginalized groups; it’s more of a spectrum opening.

We’ve always been part of the community, but then when we have things like pictures and media to support this popularity, it then shows the multifaceted appeal of this music. Up until this point, we might not have had the tools to prove that the fans as well as the music makers are not all of one demographic. We have more than enough [now] to prove that. So now, people can feel as though they’re welcome, and as a result, draw more people into the genre. People can research legends like Charley Pride and realize there have been legends throughout the years making music within the broad church of country and country genres for a long time. You’re not reinventing the wheel. You’re not doing something alien or new in any way. It’s just time.

What comes next for you as an artist now that you’re on the other side of your album and being nominated for Grammy Awards?

Read this Next: This is Feminist Country 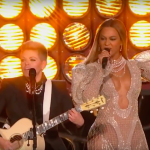 by Katie Presley
If the Country Music Association wants to last another 50 years, it'll have to accept Beyoncé and other artists of color.