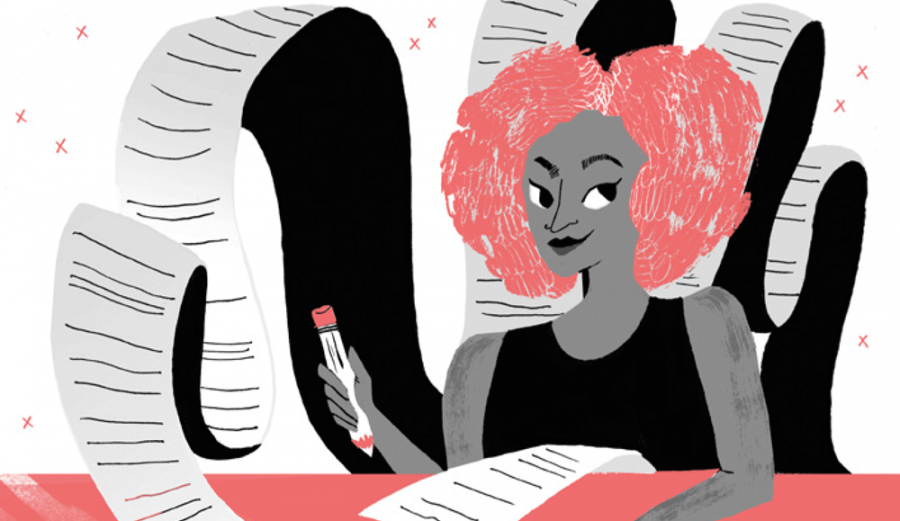 In her debut book, You Can’t Touch My Hair: And Other Things I Still Have to Explain, actor, comedian, and writer Phoebe Robinson gives readers a peek into the life of a Black woman living in America today. Through a series of essays, she distills myths about the Angry Black Woman stereotype, spills BPSs (Black People Secrets), and engages the future female president with a list of demands. And she does all this while being funny as heck at the same time. Robinson’s skillful weaving of pop culture references, jokes, and serious facts makes the book hilarious at times and serious at others. It’s clear that while Robinson is deeply concerned about social justice, representation, and equality, she’s learned not to take herself too seriously—which makes for a very entertaining read.

Her book is similar to Roxane Gay’s Bad Feminist in terms of its criticism and analysis of pop culture, but Robinson has way more jokes about having sex with white guys and listening to U2. Throughout the book Robinson discusses her “white tendencies,” or things she likes to do that people assume are things only white people do. While Robinson enjoys “white” music and white dudes, it’s clear that this does not make her any less Black than the rest of us. This is an important point because it refutes the small box we attempt to put all Black people in. There are infinite ways to be Black, and Robinson deftly illustrates her own.

Another aspect of Black culture Robinson discusses is the politics of Black hair. She has two chapters dedicated to discussing the nuances of Black hair, first describing her experience with embracing her natural hair and then listing the most iconic moments of Black hair in film, tv, and other pop culture. Robinson details dedicating her Sundays to straightening her hair so she would look “presentable” in school. This raises a lot of questions. Such as: What does it mean for Black women to be told natural hair is not presentable or must be “tamed” in order for it to be seen as acceptable in society? What does it mean when the act of altering your own hair is ingrained into your culture and schedule? Most important, what does it mean when Black women come to the realization that natural hair could determine the jobs we get, how people see us, and, for Robinson, whether anyone wants to take you to junior prom?

The story Robinson tells is all too familiar to Black women. We have learned how to adjust our behavior, appearance, and the way we see the world around us. Granted, I recognize my privilege as an Afro-Latina with a curl pattern that’s seen as beautiful in the natural hair movement, while other, tighter curl textures are seen as “nappy” or not curly at all. And yet, when Robinson describes setting aside an entire day just to straighten her hair, I can relate. Robinson’s segue into the next chapter, praising figures such as Angela Davis, Janelle Monáe, and Little Richard for their pioneering hair is much needed and appropriate. Her mention of the iconic scene where Viola Davis takes off her wig in How to Get Away with Murder (omg) and Janet Jackson’s and Lenny Kravitz’s “woke” (a.k.a. being informed about the injustices in the world, specifically those related to Black people) styles really allows readers to get a multifaceted view of the beauty of Black hair.

In the chapter “Welcome to Being Black,” Robinson describes the moments in every Black person’s life when we realize we are…Black. Not in the way where you recognize the color of your skin, but in the way where you have an epiphanous moment while facing the racist effects of being Black firsthand. I think all Black people can relate to this experience, and if you can’t, it’s likely that you haven’t experienced it yet or just haven’t noticed the racist or discriminatory ways people act toward you. Interestingly, Robinson uses this realization to delve into the case of Jennifer Cramblett and Amanda Zinkon. As the story goes, the Ohio couple wanted to have a baby, so in 2011, Cramblett was inseminated by the Midwest Sperm Bank. Turns out, she was inseminated with a Black man’s sperm and had a Black baby. So what do they do? They sue the Midwest Sperm Bank, citing so many racist and narcissistic reasons for the suit that it was hard to finish the chapter. Apparently, doing their daughter’s hair would be too hard for the couple and would require them to enter a Black neighborhood they would not be welcome in. Lord have mercy. But Robinson finds a unique and clever way to tackle this issue by ending the chapter with a mini list titled “Welcome to Being Black,” which details essential must-knows to succeed as a Black person—like always having cocoa butter, dealing with a white coworker who is too enthusiastic about Black History Month, and having everyone think you’re related to the only other Black person in the room.

Robinson’s voice is raw, authentic, and seriously funny. Really, anyone reading the book could learn something, regardless of their race, gender, or sexual orientation. Robinson clearly is one of the most influential voices of her generation, and I can’t wait to see where she goes next.