You Can Be a Feminist and Not Support Hillary Clinton 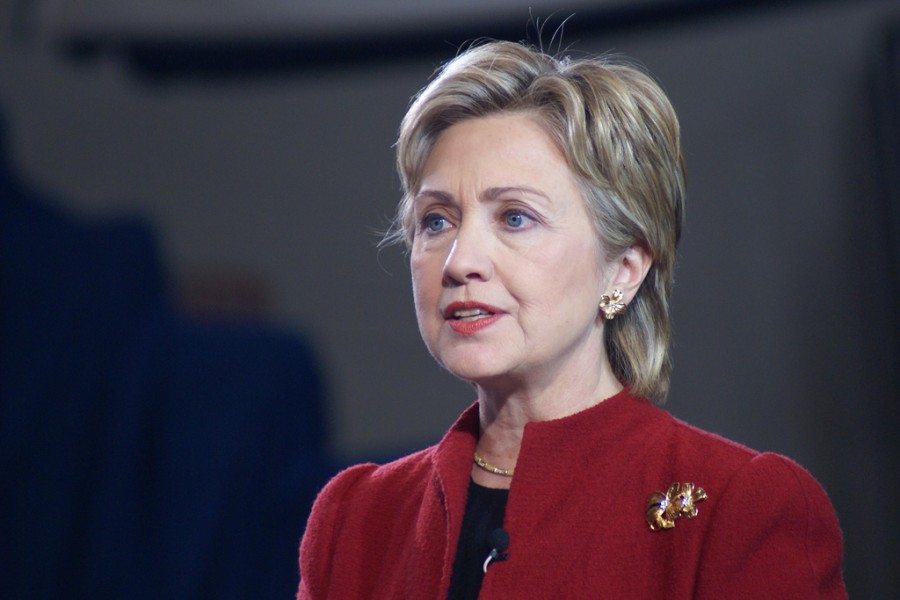 Hillary Clinton in New Hampshire back in 2007. Photo by Marc Nozell (Creative Commons).

Two feminist icons landed in hot water over the weekend after encouraging young women to vote for Hillary Clinton.

The much-discussed arguments from Madeleine Albright and Gloria Steinem were fundamentally different, however. The first stumping for Hillary came from former Secretary of State Madeleine Albright, who was tasked with introducing Clinton at a New Hampshire rally on Saturday night. Albright said that while Democratic competitor Bernie Sanders says he’s offering a revolution, electing the first female president would be a real revolution. She went on to call out young women who think the fight for equality is over.

“We can tell our story of how we climbed the ladder, and a lot of you younger women think it’s done,” Albright said. “It’s not done. There’s a special place in hell for women who don’t help each other!”

Gloria Steinem’s call for supporting Hillary came during an interview with the often-unlikable Bill Maher. Her argument has been described as “rebuking young women” for supporting Sanders, but I think it’s more nuanced than that. Here’s what she said:

“I find the young women very activist and they're way more feminist. We were, like, 12 crazy ladies in the beginning, and now it's the majority. I do think that gratitude never radicalized anybody. I did not say thank you for the vote. I got mad on the basis of what was happening to me, and I think that that's true of young women too. So they're mad as hell because they're graduating in debt, and they're gonna earn a million dollars less over their lifetime to pay it back, they're mad about what's happening to them.”

When Maher followed up, saying that young women don't like Hillary, Steinem responded that  “women get more radical as we get older,” which is not a trend seen among male voters:

“It's not fair to measure most women by the standard of most men, because they're gonna get more activist as they grow older, and when you're young, you're thinking, ‘Where are the boys, the boys are with Bernie.’”

That last line is what raised the most eyebrows—it seemed that Steinem was saying young women would support Bernie just to get with guys. As Jill Filipovic noted, what Steinem is saying here is that things which are “guy-approved” in our society are deemed cool, while things that women like are often demeaned—whether it’s our music, our fashion, or our politics. Hillary Clinton isn’t cool. Bernie Sanders is cool.

For her part, Steinem issued a statement saying that she definitely did not mean to imply that young women aren’t serious in their politics:

“What I had just said on the same show was the opposite: young women are active, mad as hell about what’s happening to them, graduating in debt, but averaging a million dollars less over their lifetimes to pay it back. Whether they gravitate to Bernie or Hillary, young women are activist and feminist in greater numbers than ever before.”

Albright, it’s worth noting, didn’t issue any sort of clarifying statement. Her quote about there being a special place in hell for women who don’t support women is something she says all the time—it is literally emblazoned on a Starbucks cup above her name. 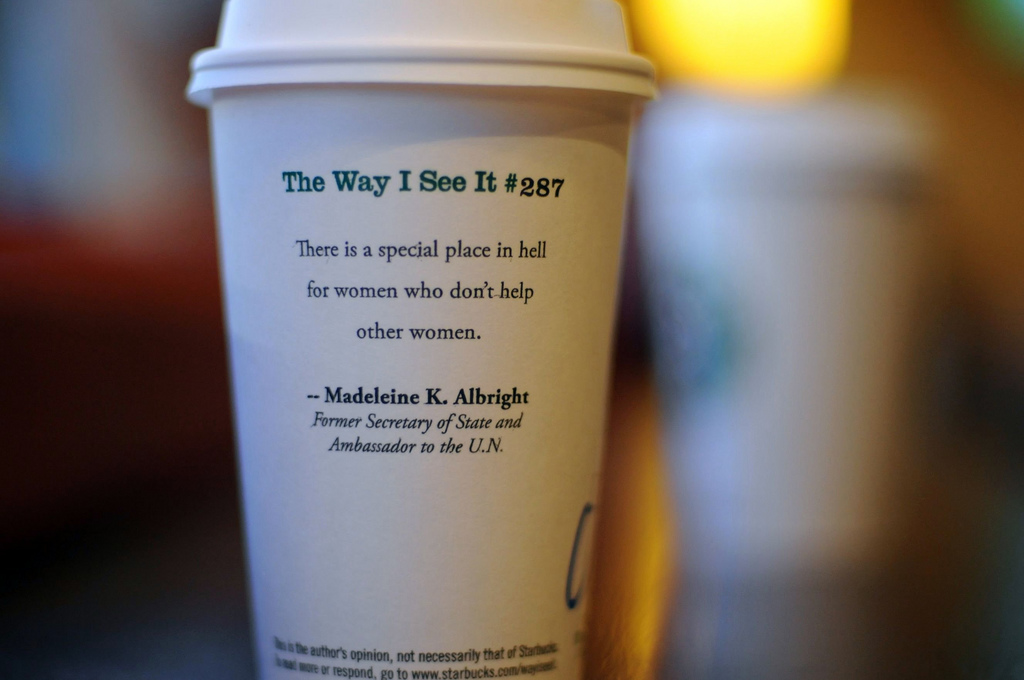 We’re beyond the political era of supporting women just because they’re women—would female voters go to hell for not supporting, say, Sarah Palin? Nope. Because regardless of her gender, you can disagree with her policies. That’s the sticking point here—arguing that female voters should support Hillary Clinton solely on the grounds that she is a woman does her a disservice. Women should vote for Hillary Clinton if they believe she’s a competent, intelligent, and inspirational politician who is good at sometimes delivering particularly delicious orations shutting down Republican anti-abortion extremists. The pervasiveness of sexism in the framing and discussion of Clinton means we can’t judge all criticisms of her in the same way we judge criticisms of male politicians—as many writers have pointed out, her tone, looks, and word choice are all policed more harshly than Sanders’s. But that doesn’t mean we can’t be critical of her at all. As writer Sady Doyle eloquently tweeted yesterday, “Young women are not a monolith. 'Old' women aren't either. Women aren't. This is an election, not the plot of 'Sleeping Beauty,'” and “AS PEOPLE, women get to disagree with each other. We have a formalized process of political disagreement, in fact, called 'elections.'” 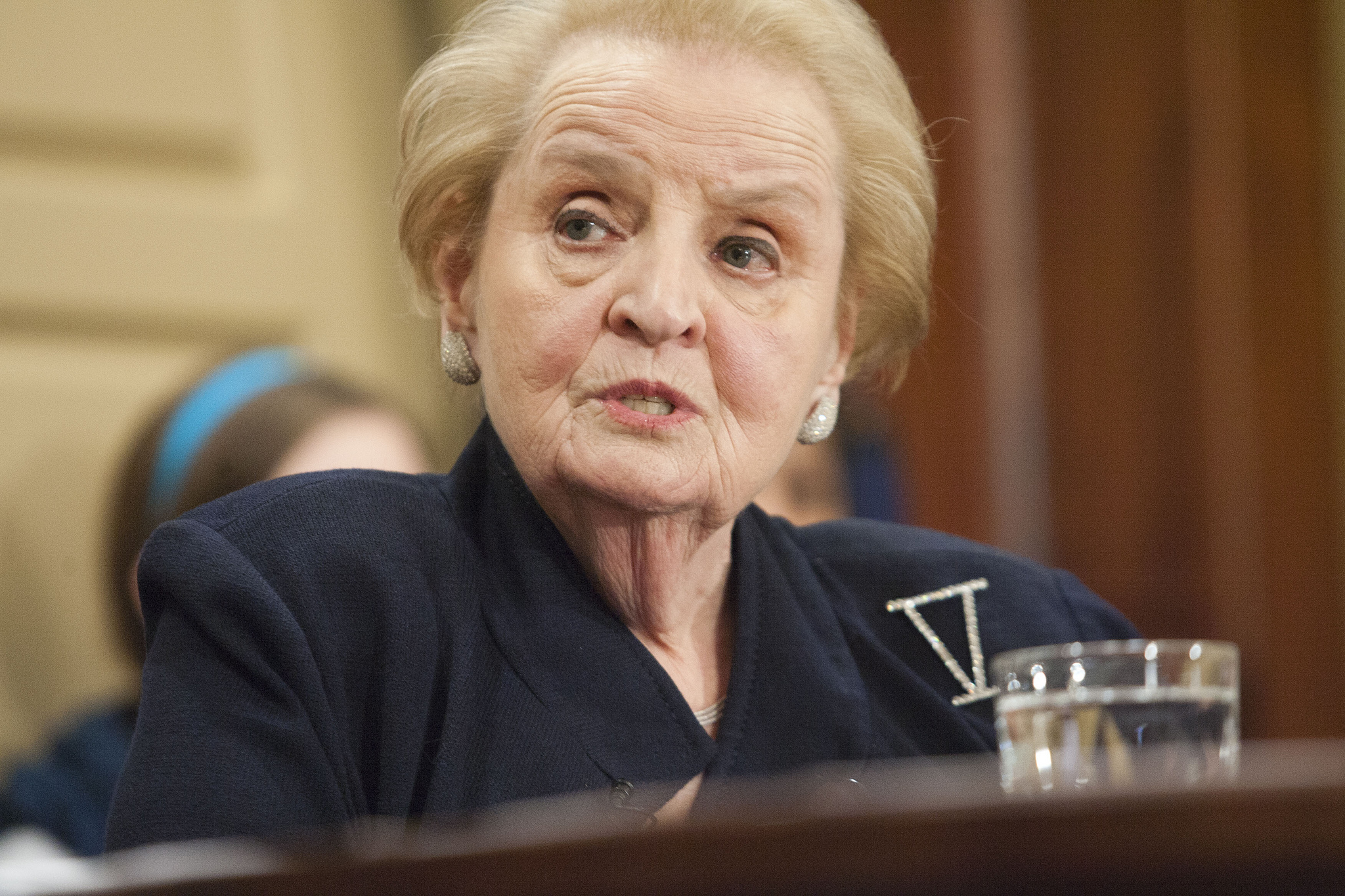 Madeleine Albright in 2013 - Photo by the Miller Center (Creative Commons)

This kerfuffle reminds me of a dinner I had with a friend’s parents recently. The parents are in their sixties and had been socialist activists in the ‘60s and ‘70s. They were a little annoyed by the politics of young people these days. Instead of being grateful for the major gains made in civil rights that the past generation pushed for, young people seemed to be increasingly critical of the leaders who were heroes of their parents’ era. Instead of turning out to support Bernie Sanders, for example, some young people were interrupting his rallies with Black Lives Matter signs. “Don’t you realize how good you have it?” one of the parents asked me. “Yeah,” I said. “But it’s not good enough.” I think the generational split we see here is that younger people are in some ways more quick to embrace both progress and critique. Sure, either Hillary or Bernie would certainly be better for the majority of Americans than Ted Cruz or Donald Trump. But young women are active and are mad, and whether we wind up personally voting for Bernie or Hillary, we want to have space to acknowledge that both candidates have room for improvement and our support shouldn’t be a given.

Albright’s “special place in hell” argument is particularly frustrating because it’s the same argument that some Bernie bros have been lobbing at Hillary supporters. As one college senior told Filipovic, “I have a lot of friends who are 'Bernie Bros’. They not only push me hard to support Sanders but seem to make a lot of arguments that I support Clinton merely because I am a woman.” Respecting the agency and intelligence of young female voters means respecting the fact that they have a choice—and have thoughtful reasons for choosing Hillary, Bernie, or whoever else they decide to support.

What’s the most exciting about this election right now is that we actually have a choice between candidates and can debate about it. Hillary isn’t a shoo-in for the nomination and that’s a good thing—running against Bernie has pushed her to have a more progressive campaign platform and gotten more people engaged in the political discussion. The fact that they were neck-and-neck in the Iowa Caucus isn’t something to fret over, it’s something to celebrate: Instead of voting as a herd one way or the other, people are making actual decisions for themselves. Debate over the issues at the heart of these campaigns is good debate. What’s not up for debate is whether women are obligated to vote as a bloc for Hillary Clinton.

I'm okay with this so long as women are or are not voting for Hillary because of her political position. The danger here is that too many women are turning their backs on Hillary because her personality isn't one that we would want for ourselves or the women in our lives. Running for president should not be personality contest. If you don't like Hillary's message, fine. If you don't like how Hillary delivers her message then you should listen more carefully and perhaps take this as an opportunity for self reflection and examination of what your own expectations of women are and what society expects of women in the public sphere. Rant over... 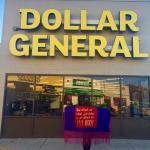 by Sarah Mirk
Dollar General was fighting against the rights of a Native American tribal court to prosecute a sexual assault. They lost.