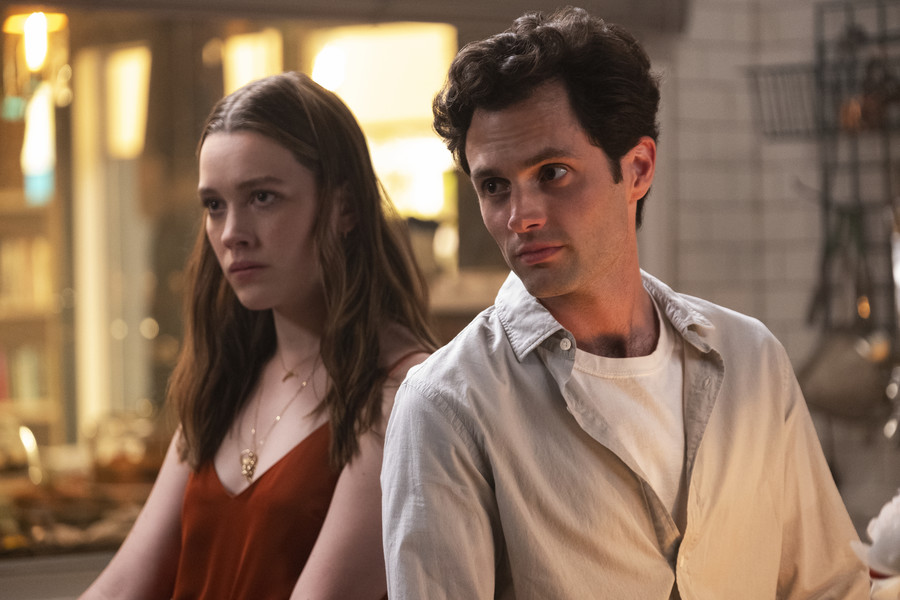 Victoria Pedretti as Love, left, and Penn Badgley as Joe in You (Photo credit: Beth Dubber/Netflix)

I got duped. I devoured the first season of You in December 2018, when it moved from Lifetime to Netflix, so I’m well acquainted with the show’s titular protagonist, Joe Goldberg (Penn Badgley), who stalks and kills his romantic partners because he believes he’s protecting them from themselves. And still, I thought Joe had turned over a new leaf at the start of Season 2. I should’ve known better; after all, Joe says in his signature voiceover that “fools do rush in” and that “I’ve been the fool more than once,” though I assumed he was speaking about himself—not about the audience. I was wrong.

Our ominous nice guy with a murderous impulse intends to start over when he leaves New York City for the “strange land” of Los Angeles. He’s no longer Joe, the bookstore manager who turns his ex-girlfriend Guinevere Beck (Elizabeth Lail) into a bestselling author by killing her and then mailing her unfinished manuscript, most of which is about him, to one of her Master’s of Fine Arts classmates. Now he’s Will Bettleheim, another man capable of blending in, though this time he’s stolen his identity from a hacker and con man (Robin Lord Taylor) who’s now caged in a replica of the glass prison he once held Beck in. Joe gets a job peddling books at a gluten-free grocery store with an attached cafe, and promises that “this time will be different,” meaning he won’t chase after a woman, infiltrate every aspect of her life, and then kill her when she doesn’t live up to his expectations. In his words, Los Angeles is not only his new home; it’s the birthplace of a new him.

Joe’s “I’ve changed” charade unravels at the end of the first episode of Season 2; we learn that he’s orchestrated his “accidental” run-in with his new obsession—Love (Victoria Pedretti), the wealthy co-owner of the store where he works. Every aspect of his “new” life—from where he chooses to live to where he works to the grocery store he shops in—revolves around Love, the woman he swears is helping him become a better man who doesn’t fixate on a single woman, create scenarios where he’s perceived as the “good guy,” or try to save people who don’t need his interference. And yet, Joe falls right into his old behaviors because, ultimately, he’s a killer who camouflages his evil inside a bookish white guy persona. Nothing’s changed but his zip code.

Joe’s innermost wayward and creepy thoughts continue to guide Season 2, playing the same role they did in the first season. We see his relationship with Love, with his new landlord Delilah (Carmela Zumbado), and with Delilah’s social-media savvy teenager sister Ellie (Jenna Ortega) entirely from his perspective, though his actions are filtered through his need to control the contours of their lives and their view of him and his behavior. He rationalizes his compulsion for protecting Ellie—by killing Henderson (Chris D’Elia), the famous comedian and filmmaker she’s interning for who once assaulted Delilah—just as he rationalized protecting his former neighbor Paco (Luca Padovan) by killing his mother’s abusive boyfriend. In Joe’s mind, violence is a means to an end rather than a defining character trait. Throughout this season, that call comes from inside the house—or in this case, the people who die at Joe’s hand. Before Henderson falls down the stairs and dies, he tells Joe that they’re just alike; they both feel like a “piece of a shit,” which is the reason they masquerade as heroes. When Joe tells Henderson he’s nothing like him, he means it; in his mind, all of his behavior can be rationalized by his own traumatic past.

First, it was Mr. Mooney (Mark Blum), the monstrous bookstore owner who locked Joe in the same glass enclosure that he cages Beck in. Though he hasn’t faced his own trauma, and it’s only shown to us threw disconnected flashbacks, we’re still coaxed into believing that Mooney’s cruelty transformed Goldberg from a saint to a monster. Now, his parents, and more specifically, his lying, philandering mother, Sandy (Magda Apanowicz) is the culprit. Sandy’s inability to leave Joe’s abusive father, who burns Joe with cigarettes, pushes Joe to kill him; and then, her insistence that the murder was an accident designed to protect her is supposedly the catalyst for Joe’s innate need to protect those who he views as unable to protect themselves. None of his nominal “helping” actually helps, though, because it’s never truly intended to. The idea that Joe’s the sweet guy putting others before himself is little more than a cover for him—a means of justifying his brutal urges, so he can continue convincing himself that he’s a good man pushed to his limits by bad people.

You’s quest for empathy continues when Love’s friend Gabe (Charlie Barnett) takes Joe through a new-age hipster meditation designed to help him tap into his true self. During the meditation, Joe flashes back to his twisted relationship with his mother and to being locked in that glass prison by Mooney; tears cascade down Joe’s cheeks as he recalls everything he’s endured without once reflecting on the pain he’s inflicting on others. “What did you lose that makes you chase love so much?” Gabe asks, before telling Joe he’s been searching for someone to love and care for him all his life. “I am all I need,” Joe says in a guided chant with Gabe. “If you can’t love yourself, how the hell are you going to love yourself?” But self-love can’t cure a murderous, stalking compulsion, though pretending it can helps Joe further blend into his new reality. Ingratiating himself with Gabe and other people in Love’s circle is only designed to help him get closer to her. None of it is genuine; it’s all a tactic that allows him to become whomever he believes Love wants him to be.

The idea that Joe’s the sweet guy putting others before himself is little more than a cover for him—a means of justifying his brutal urges, so he can continue convincing himself that he’s a good man pushed to his limits by bad people.

In many ways, his costume works: Nobody believes Joe’s ex-girlfriend Candace (Ambyr Childers) when she tries to convince them that he isn’t who he seems to be; he tried to kill her and bury her in a remote wooded area, but her accusation seems far fetched. Love pays Candace to leave Los Angeles, and Candace’s new boyfriend, Forty (James Scully)—Love’s twin brother—looks at her incredulously when she tells him Joe killed Beck and will eventually kill his sister. Joe’s ability to blend in, a gift afforded to him by both charisma and whiteness, buys him good will, even as all signs point to him hiding something sinister beneath a gentle, caring, and understanding veneer. As Badgley said in a June 2019 Variety Studios Actors on Actors conversation with Gina Rodriguez, the question at the heart of the series is a simple one: “How far are we willing to go to forgive an evil white man?” If Season 2 is any indication, we have no choice but to overlook the obvious in favor of granting white men an inherent innocence; it’s a default.

That’s the legitimate answer to the rhetorical question Candace lobs at Forty: “What is it about Joe fucking Goldberg? Why is it that no one can see him for what he is?” He charms so that he can manipulate, a line that Love uses in relation to her parents (it’s really a meditation on herself and her own murderous impulses), and many viewers, myself included, fall for it. “Growing up, I felt unsafe, powerless,” Love tells Joe, after he witnesses her mother slapping her in the face during a wonky family retreat doubling as Love’s parents’ vow renewal. “My life has been dark,” she continues. There’s no sense in watching two people who manipulate each other and everyone around them bond over their separate and shared trauma, but that’s the twisted world You insists we see as normal. Joe continually underestimates the women he’s harmed or intends to harm. After kidnapping Candace, tying her up in the back of an empty van, and bringing her to Lake Mahopac to have a picnic and talk, he’s completely unprepared for her to enact revenge. Though he invokes fear in Beck, Candace, and the other people he kidnaps, kills, and otherwise maims, none of these women are as innocent as Joe believes they are; whenever Joe realizes this, it triggers his urge to kill because he now knows he can’t protect adults from their own flaws. None of them need to be protected by Joe or by anyone else.

When Love tells Forty and Joe that she doesn’t need anyone to defend her after they confront her new beau (who happens to be the best friend of her deceased husband) she means it. Every woman in Joe’s life is capable of self-defense. Joe capitalizes on the culture of disbelief that plagues victims, but he’s unprepared to “meet his match,” as the show’s tagline suggests. He’s unprepared to have another fox in the henhouse who also kills to protect. And that’s the point, as Sera Gamble, You’s showrunner, explained in a recent interview with Vulture. When he realizes that Love is as capable as he is of killing, he “is unable to stare down the truth of everything he’s done—that if he did really see himself, he would be repulsed,” though he claims he understands what Beck went through—the dawning realization that someone isn’t who you assumed them to be. Joe’s a serial killer, period, so why did I gasp—again—at the final scene in Season 2? How was I duped again? Just because he impregnates and marries a woman who’s also a killer doesn’t negate his impulse to fixate on women, manipulate their relationship to turn himself into a savior, and kill the women he claims to live whenever his fantasies are disrupted. Joe’s pattern is clear. Maybe this time we’ll be able to see him clearly.

Read this Next: “You” and the Excuses We Make for Traumatized Men 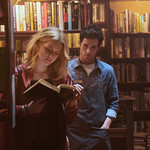 by Nooreen Reza
Joe Goldberg, with all his deadbeat dad-inflicted burns and memories of living on the streets of New York, is a special kind of fiction, but he has real-life brethren the world over.