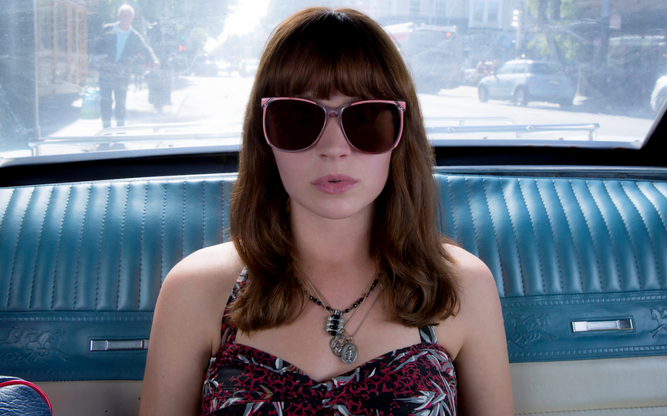 These words are spoken early in the first episode of Netflix’s new series Girlboss by a crotchety old woman (played by living crotchety legend Louise Fletcher) who is on the receiving end of a self-pitying monologue by the soon-to-be-boss of the title. The scene is an obvious nod not specifically to millennials, but to every generation’s struggle to be taken seriously as Actual Adults by those who came before. Still, you’d be forgiven if you read it as millennial-specific, since Sophia Marlowe, Girlboss’s heroine, spends the bulk of the episode embodying every cliché about that maligned demographic. In its dizzying initial scenes, we see Sophia do the following:

• Push her out-of-gas car up a San Francisco hill while shouting at a cable car to “go around” her (which the conductor points out is impossible to do, what with the car being on tracks).

• Arrive late to her retail job, be a jerk to her boss, steal and eat her boss’s sandwich, and seem legitimately offended when she gets fired.

• Buy a vintage leather jacket at a secondhand store for nine dollars, and immediately jeer at the store’s owner that he “just got played” because it was worth much more.

• On a post-jacket high, steal an entire 8”x10” rug from the sidewalk display of a store, ignoring the store employee who tries in vain to call her out.

These last two events are scored to Bikini Kill’s “Rebel Girl,” which as far as I can remember is not an anthem about stealing and taunting the employees of small businesses. But its use here is notable: The theme of Girlboss is that building a blockbuster business is a feminist act, and its execution suggests that pretty white girls pushing the limits of what they can get away with is the key to that success.

Girlboss, which was created by Kay Cannon of Pitch Perfect fame, probably seemed like a slam-dunk idea when Netflix announced it in 2016: The series is loosely based on the memoir-slash-business guide of the same name by Sophia Amoruso, who started what would become the multimillion-dollar business Nasty Gal as a humble eBay store in 2006. In 2014, Business Insider enthused that Amoruso was “making feminism cool again” contrasting her scrappy, unpedigreed spirit with the more polished corner-office striving of Sheryl Sandberg. At a time when “feminist” had become a branding buzzword and a female presidential candidate was on the ascent, Girlboss offered up a bold new pop culture archetype: Move over, Manic Pixie Dream Girl, here comes Saucy Vixen Boss Babe.

But through no fault of its own, the reality into which the 13-episode series struts makes it seem, in too many ways, spectacularly tone-deaf. Feminism has been thoroughly mainstreamed as an individualist pursuit of success under capitalism rather than a collective liberation of women, and Sandberg and Amoruso have become symbols of the fragility of its trickle-down promise. Sisterhood is still frustratingly interpreted as a mandate to support other women, even those who actively work against women’s interests; Ivanka Trump shills handbags and jewelry for the working woman while her father pledges to cut all funding from State Department initiatives that focus on global women’s rights. And, of course, Nasty Gal itself declared bankruptcy in 2016, and Amoruso stepped down as the company’s CEO amid legal challenges from, among others, employees who were illegally fired when they got pregnant and stripped of necessary health care.

Given that the introduction of each episode asserts that Girlboss is a “real loose” interpretation of real-life events, it should be easy enough to sit back, disconnect the real, cult-of-personality Sophia from the fictional one, and enjoy what the show does have to offer. There’s self-aware humor, likeable if predictable costars (aside from Fletcher, there’s Jim Rash as vintage vendor Mobias, and RuPaul pulling double duty as both the Gay Friend and the Sassy Black Neighbor), and unconventional storytelling: The episode “Vintage Fashion Forum,” in particular, brings the online personas of a listserv to life, complete with infighting, all-caps shouting, and the inevitable 9/11 truther.

But the self-mythologizing of the show’s heroine and the anticipatory acknowledgment of her as selfish, mercurial, and rude (“Why am I such an asshole?” she asks her best friend) still don’t sit very well; defending Sophia as a deliberately unlikable character itself seems a little out of date. The expanding landscape of television, especially in original programs from Netflix, Hulu, Amazon, and more, means that unlikable characters can no longer just be jerks for jerks’ sake. An increase in flawed characters—of all genders—requires narrative development that makes them more than two-dimensional caricatures. Additionally, an increasingly intersectional lens on TV characters makes it difficult to look at the scene where Sophia steals that rug (or steals a book on business, or steals alcohol from a movie theater, or steals a stuffed monkey from a gas-station minimart…) and not immediately recognize that the same scene with a nonwhite character would not be clocked as harmlessly quirky character embellishment.

“Women doing stuff that men usually do: feminism!” was a bolder concept back in the time of Working Girl (to which Girlboss tips its hat by closing one episode to the soaring tones of Carly Simon’s “Let the River Run”). These days, we’re well aware that women—in business, in politics, and in popular culture—can be as craven, as mercenary, as ruthless, as inhumane, and as incompetant as their male counterparts. And though that is certainly a benchmark of equality—as Bella Abzug once noted, ensuring that “a woman schlemiel [can] get as quickly promoted as a male schlemiel” is an integral piece of the struggle—it has nothing to do with feminism. Enjoy Girlboss on what merits it has, but don’t try to convince us of more.

Relevant: The Hunger Games' Anti-Consumerism Message is No Match for Cover Girl