Champagne, Sequins, and Male Tears“Z” Season One Roundtable for Two 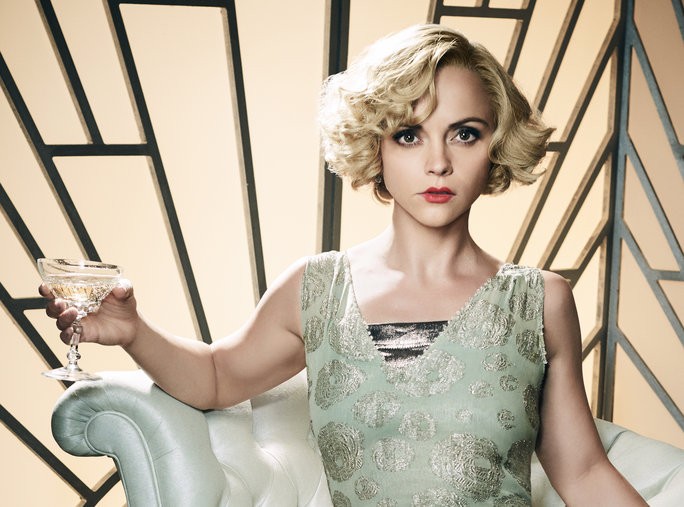 In 1918, 17-year-old Zelda Fitzgerald, née Sayre, meets F. Scott Fitzgerald at a country club dance in Montgomery, Alabama. Two years later, they are married and living large as the first socialites of the Jazz Age—all of that before Paris and The Great Gatsby. Amazon’s Z: The Beginning of Everything, is a new series based on the fictionalized memoir Z: A Novel of Zelda Fitzgerald by Therese Anne Fowler. It follows the Fitzgeralds through their bumpy marriage, their flapper-artist lifestyle, and party after party after party. Eventually, the money runs out and the parties come to an end—and Zelda realizes Scott has been plagiarizing her letters and diary for his own work. Britt Ashley and Dahlia Grossman-Heinze tuned in for a roundtable on flapper outfits, champagne, the Jazz Age, and the canonization of white, male writers. Spoilers ahead, but also not really since the series is based on the Fitzgeralds’ real-life exploits.

DGH: Christina Ricci is high in my personal pantheon of celebrities because of the Addams Family movies, and I read Z: A Novel of Zelda Fitzgerald a few years ago, so I was totally game for this jazzy series. After the first episode, there was actually nothing other than Ricci’s presence that kept me watching at any time. Zelda Fitzgerald died at 47 in a hospital fire, and for reasons I cannot comprehend, the opening shot of Z is a firefighter poking through Zelda’s burned hospital room, a blanket draped over her body on the bed, a brief prologue before flashing back to 1918 when Zelda Sayre was just an Alabama debutante. That is not a good way to start this show.

BA: Oof yes. That prologue is just tacky and off-tone. Full disclosure, my heart burns with a particular hatred for white male writers of the Lost Generation/Jazz age. The canonization of Hemingway and Fitzgerald really frustrates me because they, along with a few other white, male writers (SIDE EYE AT YOU, HENRY MILLER), were presented to me as Very Important Writers that as a young person with writing ambitions of my own, I was obligated not only to learn from but to admire. And when I didn’t show the proper deference or enthusiasm for their work, I was told by both (white, male) teachers and trifling high school boyfriends that I just “didn’t get it.” So, given that Zelda Fitzgerald had literary ambition and talents of her own I was excited about this series and what Ricci, as both actor and producer, would do with Zelda’s story.

DGH: Christina Ricci smizing at the camera in her Zelda outfits. Also there were some nice-looking bubble baths.

BA: So many sequins! So much louche and glamorous trashing of hotel rooms! A world in which Trump doesn’t yet exist! Ricci does indeed have a smize for the ages.

DGH: F. Scott Fitzgerald is gaslighting Zelda! Every problem the couple runs into is completely his fault (he says so himself after making an ass of himself at his Princeton reunion because not enough professors showed up to his reading), yet somehow Zelda is always to blame. The Fitzgeralds get evicted from their hotel because Scott won’t pay their bill and is trying to keep Zelda from finding out that they’re broke, but Zelda’s the real problem because she’s acting childish while they’re getting evicted. The Fitzgeralds are broke because Scott won’t show his agent any new pages, but Zelda’s the real problem because she distracts him while he’s supposed to be writing. Zelda catches Scott cheating on her, but he says, “What are you even talking about?” when she tells Scott she’s leaving him.

BA: UGH. He really was such a gaslighter, and a damn thief. I am still outraged by the scenes where he takes her journal into his writing room to copy from it and later gives her ACTUAL JOURNAL to his agent, Max Perkins, to read instead of the pages he was supposed to turn in. Yet when Perkins tells Zelda that she has talent and a distinct voice in her prose, Scott totally shuts it down. So gross.

DGH: SO gross! The broke Fitzgeralds are presented with a way to keep their decadent lifestyle via Zelda earning a paycheck (instead of Scott earning one by ripping off her words), but Scott won’t listen to his own damn agent.

BA: YES! He is the worst! He keeps her totally dependant on him financially while actively preventing her from pursuing her own artistic work which could have benefitted them both. Zelda was also offered film work at one point and he put the kibosh on that as well. Scott listens to no one but his stupid bottle of gin and manbaby tears.

DGH: I think it’s fair to say we hated much of it.

DGH: It was nearly impossible to track the passage of time in Z, so much so that I found myself doubting facts I knew about the lives of the Fitzgeralds. “When are they going to Paris? They do go to Paris, right?” I wondered, or “It seems like it might be over, but it can’t be over yet; he hasn’t written The Great Gatsby!” Other than these basic biographical facts, there was no way of knowing whether it had been a year in the Fitzgeralds’ marriage, or 20.

BA: Agreed. Also, I love Christina Ricci so much but I felt like her performance of Zelda was underwhelming. The set design and costuming were wonderful, and Ricci has screen presence to spare. But thinking about Zelda as this intelligent, ambitious, talented woman who was so privileged in many ways but also incredibly confined by the expectations of class and gender, I expected more friction from the performance. Zelda was caged and I wanted to feel barely contained fury radiating from her. The series sets up a promise that we’ll be seeing their marriage and his work from her perspective, but there’s not much depth to the show. It felt very surface-level and reactionary and heavily oriented toward Scott, rather than Zelda. At the very least they could have made better use of her journals and given us more access to her prose that way.

DGH: Christina Ricci and Therese Anne Fowler are both producers on this show, so I was hoping for more insight into Zelda and more of the show being from only Zelda’s perspective, giving us more access to her. Z does very little to make it clear that Zelda had intellectual and artistic ambitions of her own. In the narrative, Zelda just accidentally happens to keep a beautifully-written journal, but she’s not a writer or working on her craft or anything like that. Representations like that serve to make Scott seem even more like a Very Important Writer, toiling away on his perfect prose, while Zelda is just wasting time writing in her silly diary.

BA: The whole boy-wunderkind thing is such a frustrating, sexist trope. Scott is a self-sabotaging, procrastinating alcoholic who deliberately hobbles Zelda’s ambition, preventing her from pursuing some significant opportunities. Still, she is presented as this childish party girl who doesn’t know how to do laundry while he gets to be a tortured artist. It’s really a missed opportunity, and if the series continues I do hope they course correct. Though given that the big season finale reveal is that Zelda is pregnant, I’m not holding my breath.

DGH: Jennifer Lawrence will be playing Zelda in an upcoming biopic and so will Scarlett Johansson, so there’s obviously something about this moment in time that is creating interest in Zelda narratives, and I’m wondering if it’s an interest in her as a “trainwreck” trope.

BA: It’s so interesting when there are multiple projects looking back at specific pop culture icon. I’ve been thinking about what it is that’s calling people to return to her. She is often cited as the original flapper girl and what was so thrilling and scandalous about that archetype was this idea of a young girl flaunting convention by proclaiming her singular identity and desires as more important that the ingrained societal conventions of the day. Clearly, the It Girl still compels us today and with the sheer volume of social media platforms available for ordinary individuals to assert themselves as a presence or even a brand we have not just one individual claiming that cultural space, but many.

It makes sense to look back at Zelda’s narrative as a kind of origin story for the cult of personality that we see playing out on Instagram and other spaces like that today. I like what you’re saying about the trainwreck trope as well. I think that Zelda was so often held up as a cipher, of both her husband’s talent and his downfall, of the aesthetics of her generation, and even as a warning of what happens when women in particular flout convention. (Spoiler alert: insanity and fiery death!) I really hope that at least one of the upcoming Zelda projects goes beyond the surface-level intrigue we saw in Z and treats her as an individual—not just as a symbol.