Hollywood Isn’t Ready for the Realness of “Zola” | Bitch Media

Is Hollywood Ready for the Realness of “Zola?” 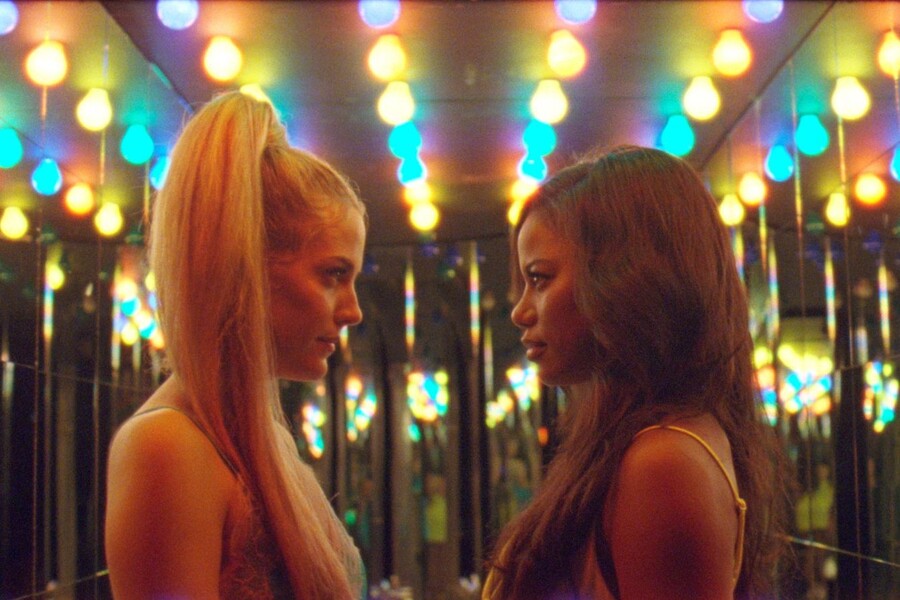 Riley Keough as Stefani and Taylour Paige as Zola in A24’s film Zola (Photo credit: Courtesy of A24)

Back in 2015, Detroit native Aziah “Zola” Wells shook up Twitter with a photo of two women and the opening sentence “Y’all wanna hear a story about why me and this bitch here fell out? It’s kind of long but full of suspense.” The story ended, 147 tweets later, with what seemed like the entire internet in open-mouthed shock. The short version of the story is that Zola meets a woman while at her day job and agrees to road-trip to Florida with the promise of making some quick cash at Tampa strip clubs; the longer version that Zola unspooled on Twitter had details, dialogue, and plot twists—including drugs and murder—that came alive in nail-biting, terrifying revelations. As rapper Missy Elliott tweeted at the time, “Ended up reading the whole [thread] like I was watching a movie on Twitter.” And she wasn’t the only one: Among the hundreds or thousands of users who were glued to their screens was filmmaker Janicza Bravo. And the resulting film that Bravo directed and cowrote (along with playwright Jeremy O. Harris) is not only the first feature film to originate on Twitter, but a compelling cautionary tale about precarity, race, and the lengths people will go for a quick buck.

From the moment we meet Zola (Taylour Paige), we know she’s sharp and extremely witty. Like many millennials, Zola is struggling to make ends meet, and a weekend money making opportunity is alluring. The unfolding plot in which she learns that Stefani (Riley Keough), a.k.a. “this white bitch at Hooters” is in cahoots with a pimp/drug lord makes for a sharp comedy with lots of back-and-forth banter. Bravo and Harris use Zola’s original tweets in places, as both narration and straightforward dialogue, but add depth and character development to push the plot forward. Bravo didn’t want to just re-enact a Twitter thread with visuals; she wanted to add flavor to each of the characters while telling a thought-provoking tale about the realness of the struggle for young Black women who want to own their bodies. (“When I first learned about the story, I was obsessed with telling it because the story was so raw,” Bravo told Esquire after the film’s premiere at the 2020 Sundance Film Festival.)

The film’s outlandishness is what makes it such a ride. Bravo and Harris have noted that Zola herself embellished some details in the Twitter thread; they appear in the movie because they feel true to the overall story and its tone—and help make the point that social media lets us craft our own personal narratives in real time, for better or worse. And the characters of Stefani and her sad-sack boyfriend, Derek (Sucession’s Nicholas Braun), also serve as a reminder that who tells a story matters. The details Stefani fails to disclose to Zola before they hit the road, as well as the fact that Derek’s increasing jealousy knocks their plans off track, put Zola in real danger. This speaks to what film critic Valerie Complex had to say about the film and how while on the surface the film is entertaining, it still speaks to the struggles Black women have.

“Black women live in a different world,” says Complex when speaking about their thoughts on the film. “Black women always have to hustle while white women get to see the ‘hustle’ and sometimes the danger that comes with it as fun.” Complex went on to say that the deeper meaning of the film is how we often don’t listen to the heart when our mind wants what it wants. “Zola knew not to go, but [she] didn’t listen to her gut,” says Complex, noting that Stefani knowingly exposes her new friend to literally life-threatening harm by guilting her into staying even as things go horribly wrong, and that Zola is a film that reminds Black people that even in the moments where white people might mean well, we must always remember to question their intentions. While many have questioned the film’s overall message, one thing comes through as clear as day: Whiteness is pervasive, annoying, and extremely dangerous. “Stefani is a character who comes from my annoyance as a Black woman,” Bravo said after the film’s Sundance premiere when talking about why she worked so hard to attain the rights to make the film. “If you’ve read the script, you would see that it is visually potent…It’s all there. But, while others see it just as a viral Twitter thread, I see it as a film about a Black woman processing her trauma,” Bravo later told Indiewire.

Zola heightens a larger conversation about the ways the media eats up the voices and traumatic experiences of Black women but invariably leaves them outside of their own stories looking in.

For Bravo, Zola heightens a larger conversation about the ways the media eats up the voices and traumatic experiences of Black women but invariably leaves them outside of their own stories looking in. We’ve seen this happen time and time again, specifically in the #MeToo movement when Tarana Burke wasn’t given credit for her experiences and labor that went into uplifting other Black women’s voices. Even more, how much more at risk Black women are to being sex trafficked. “I didn’t want the story to get lost,” Bravo mentioned at Sundance 2020 after talking about why she was so passionate about making this film. “I didn’t want the idea of this thread to be thrown away as it has deep value to us, and I knew, from the instant I read it, I felt that I had to protect the narrative.”

While many have questioned what that narrative of both the thread and the film might be, it’s clear that it’s an ode to the real struggles that young Black women face in our world and how they are often imitated by their white counterparts (as bolstered in the film’s poster). It’s an exposé on the ways in which white people perform Blackness and how white people quickly codeswitch when shit gets real. In all, this film is a stark reminder that you can’t tell stories about Black women without Black women creators at the center of said story. While many might just see this film as a viral “Twitter thread movie,” Bravo makes it clear that Black women have something to say and that it’s about time that Hollywood gives them the space beyond 280 characters to say it.