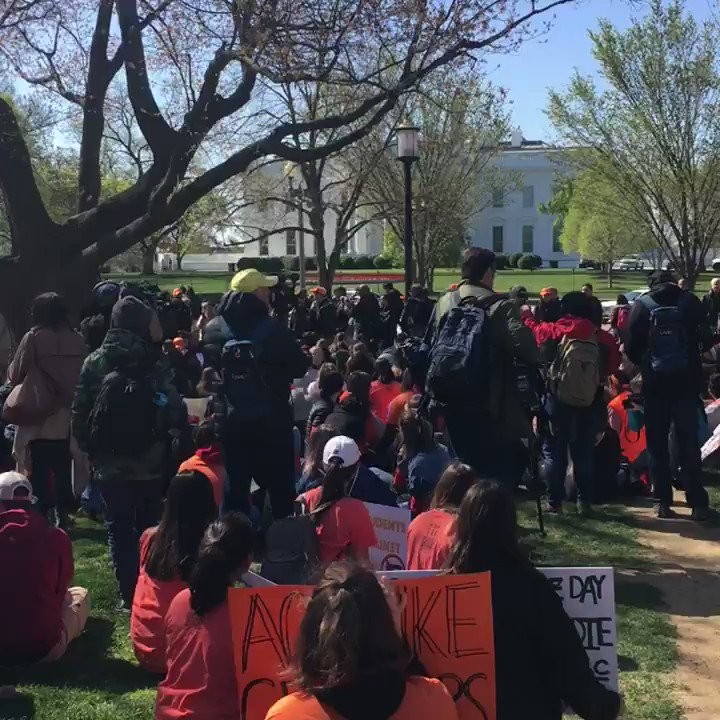 For decades, April has marked a somber commemoration in the annals of gun violence, and this month is no exception.

This year, April 4 marked 50 years since the Reverend Dr. Martin Luther King Jr. was assassinated. On April 20, thousands of students are expected to participate in the National School Walkout—13 minutes meant to honor the lives of the 13 students who died at Columbine High School, one of the first school shootings to capture national attention in America, 18 years ago.

On the surface, there might seem to be little relationship between the bullet that ended King’s life and the activism of those today who are calling for an end to gun violence. But beneath the surface there is at least one important connection: The gun reform movement that has caught fire since the February 14 massacre in Parkland, Florida is about more than young people taking the reins from their elders and saying, “We’ll handle our future since you can’t be bothered to protect it, thanks.” This movement feels inextricably connected to the aftermath of a fraught past.

After King was murdered, his widow, Coretta Scott-King, channeled her grief into activism by leading the workers’ march that her husband planned to helm four days after he was killed on the balcony of the Lorraine Motel.

Half a century later, when 17 students and faculty were slain at Marjory Stoneman Douglas high school, teen survivors like Emma Gonzalez and David Hogg not only became vocal activists, but galvanized other young people all over the country. One of them, 15-year-old Lane Murdock—who lives not far from Connecticut’s Sandy Hook Elementary School—was inspired to lead this week’s National School Walkout.

I wonder, too, if King’s death years ago—along with those of other well-known civil rights leaders—created a ripple that has led to decentralized leadership in social movements. Whether we know it or not, we carry the scars and lessons of the generations that  came before us. Perhaps seared in our spirits is also the notion that one person is too vulnerable to represent a movement. It is too dangerous.

If you study history, it is easy to believe this: Besides King, here was Malcolm X and Che Guevara. There was Medgar Evers, shot and killed at his home in 1963 for leading integration efforts in Jackson, Mississippi. A year later, there was Johnnie Mae Chappell, who was frantically searching for her wallet on a roadside in Jacksonville, Florida when she was shot because a group of white men were reportedly “looking for a Black person to shoot” after a race riot. Harvey Milk, the first openly gay politician in the state of California and the most pro-LGBTQ politician of his era, was assassinated in 1978 along with San Francisco Mayor George Moscone. In the case of Rio de Janeiro councilwoman and queer human-rights activist Marielle Franco, who was assassinated along with her driver on March 14 of this year, even modern history suggests that singular voices are still too vulnerable on their own.

In his 1972 essay, “The Shot that Echoes Still” —a reference to the bullet that killed King at the Lorraine Hotel—James Baldwin wrote eloquently about his grief:

“I don’t think that any Black person can speak of Malcolm and Martin without wishing that they were here. It is not possible for me to speak of them without a sense of loss and grief and rage; and with the sense, furthermore, of having been forced to undergo an unforgivable indignity, both personal and vast. Our children need them, which is, indeed, the reason that they are not here: and now we, the blacks, must make certain that our children never forget them. For the American republic has always done everything in its power to destroy our children’s heroes, with the clear (and sometimes clearly stated) intention of destroying our children’s hope. This endeavor has doomed the American nation: mark my words.”

Considering the young people who are leading us now makes me wonder if Baldwin was right about our country being doomed. And then I witnessed Lane Murdock at a March for Our Lives rally in Brooklyn, addressing a multiracial, multigenerational crowd in the freezing cold. Instead of centering her story, Murdock made a point to affirm that she was one of many young people who are saying what Black people have been saying about gun violence in their communities for a long time.

Parkland survivor David Hogg, too, has pointed out the ways in which mainstream media has failed to provide inclusive perspectives on gun violence—including those of his Black classmates at MSD who have expressed their concerns at the disparate treatment of Black and non-Black communities in the shooting’s aftermath, and who have noted that an increased police presence at the school  will impact them differently. While that’s not the same thing as assembling a diverse movement from the get-go, vocal and repeated recognition of clear racial disparities in today’s student movement is a start.

And the past few months have seen powerful moments in which the voices of young Black activists ring out, even if they seem to happen almost accidentally. One such moment for the history books emerged at the Washington, D.C. March For Our Lives rally on March 24, when 11-year-old Naomi Wadler spoke for herself, but also on behalf of Black girls and women who became ancestors too soon. Wadler co-led a walkout at her elementary school in the shadow of the nation’s capital; she and her friend walked out for 18 minutes—adding one more minute to the 17 at other schools to honor Courtland Arrington, an African American girl who was shot and killed at her Birmingham, Alabama high school earlier that month.

I come from a generation that has waited impatiently for sanctioned or vetted feminist leaders to understand all the ways that Black women have been forgotten and excluded.

Wadler added to the narrative of gun violence the voices of Black girls and women who are too often forgotten. Or, as she so eloquently put it, “I represent the African American women who are victims of gun violence who are simply statistics instead of vibrant beautiful girls full of potential. It is my privilege to be here today. For far too long these women have been just numbers. I’m here to say #NeverAgain for those girls too.”

I got chills as I listened to Wadler’s words over and over, inspired by the truth that there is not only one feminist who represents us now, but multiple feminisms. I come from a generation that has waited impatiently for sanctioned or vetted feminist leaders to understand all the ways that Black women have been forgotten and excluded, how white feminism and privileged feminism in some ways have not been mutually exclusive, and how celebrating the perceived progress of both destroys any hope for a true coalition among our different visions of what equality means for women from different cultures, geographies, and economic backgrounds.

Wadler was not a celebrity with a platform, but a young person speaking from her heart and her lived experience. Her words were greeted with screams, shouts, and affirmation like I have rarely witnessed in a public forum for a Brown-skinned, truth-telling, preaching baby with natural hair. There aren’t words I can leave you with that are more powerful than her own:

“I’m here today to honor the words of Toni Morrison. If there is a book you want to read but it hasn’t been written yet, you must be the one to write it. I urge everyone here and everyone who hears my voice to join me in telling the stories that aren’t told. To honor the girls, the women of color who are murdered at disproportionate rates in this nation. I urge each of you to help me write the narrative in this world that these girls and women are never forgotten.”

Half a century is a long enough span of time to have reconciled the past and learned some lifesaving lessons. It takes more than one person to make a movement and every tragedy can be turned into a healing moment—and real change.

In 1968, as youth across the country turned their grief and outrage into an antiwar movement, TIME magazine tried to capture what it referred to as “The Year of Student Power” by featuring Brian Weiss, an editor of UCLA’s Daily Bruin newspaper, as the singular representative of student leaders. This year, on a cover emblazoned with the word “Enough,” TIME featured five students, not just one. It’s enough to make me hope that the trend continues, and there will be so many young activists by 2068 that one cover won’t be enough to hold them all.