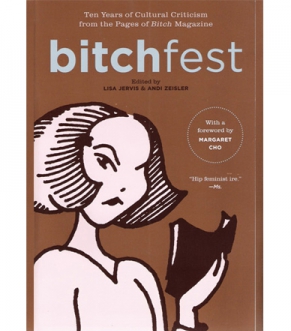 Bitchfest: Ten Years of Cultural Criticism from the Pages of Bitch Magazine

Get your autographed copy today and click here to see what people are saying about Bitchfest!

Bitchfest is a trip down memory lane (remember Lilith Fair? when Nike's "if you let me play" campaign was original? the first issue of Jane?), a collection of Bitch's most enduring and time-tested articles, and a call to action. Covering everything from puberty to activist strategies, plus a wealth of further reading and resources, it's an essential part of any feminist's bookshelf.

We'd known for years that we wanted to put together a collection of writing from the magazine. Many of our back issues were sold-out, and there was content in them that we wanted more readers to have access to, that we knew addressed vital, important, still relevant topics. We also knew publishing a book would bring more attention to the organization and its mission.

But what with the hard work of actually publishing a magazine, we had to keep pushing the book idea further down the to-do list. Until we realized: what a perfect way to celebrate our tenth anniversary. We set ourselves a deadline and wrote the proposal. Fast-forward through some agenting, some bidding, and some contract-signing, and we had two months to get the manuscript together in order to get the book out over the summer of our all-important anniversary year.

We were super-excited: Not only were we working with Farrar, Straus and Giroux, the publisher of books like Manifesta and the Feminist Classics series, but they were hiring our original art director, the incomparable Ben Shaykin, to design the book. We were psyched to get to work.

And work we did. Boy, howdy, were those two months haaaaard: We started with a spreadsheet listing more than a hundred articles we wanted to include; the book has fifty-four. There were 20 ways we could have categorized each piece; we had to marshal them all into eight thematic sections. We had to trim each article down so we could fit more in, making hard choices about this paragraph with the witty but tangential point and that sentence with the most fun turn of phrase.

Then there were the section intros to write. (Not to mention that we were still, um, putting out a magazine.) The cool thing was, it was felt a lot like a throwback to Bitch's early days, working late into the night and feverishly sending drafts back and forth, comments and edits and insights flying back and forth between us.

Sending the manuscript off to the publisher felt like sending our baby out into the world in a whole new way. (Plus, it was great not having to worry about the production process of paying the printer bill; as much as we love our DIY operation, there are some advantages to doing things differently every once in a while.)

Nine months later (symbolic, no?), the book was out and we were jetting (and taking trains) around the country to talk about it, meeting old fans and new readers from the Carolinas to Boston to Chicago and Milwaukee. As always, one of the best things about the work we do is getting to see firsthand what it means to our audience, and how folks carry the work of feminist analysis and activism forward in their own communities.