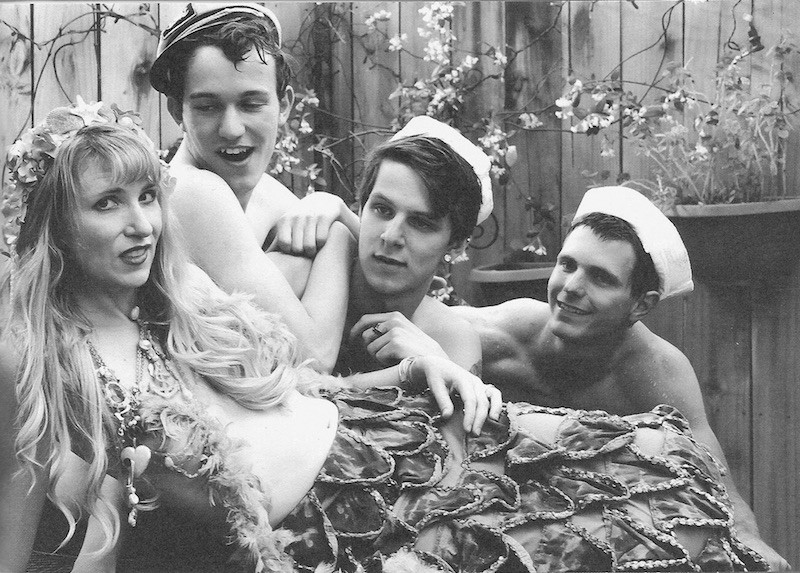 Comics artist and writer Dame Darcy, seen here as a mermaid, has just released a new collection of her work: The Meat Cake Bible.

“I’m just telling the truth from a mermaid’s perspective, from a woman’s perspective,” Dame Darcy tells me about Meat Cake Bible, her newly released collection of comics. “One of the reasons I made Meat Cake was that there weren’t a lot of contemporary plotlines—I’m talking about female-centric content—that touched on things we really care about.”

I know exactly what she means. I grew up reading comics because my best friend’s dad would take us to a comic book shop. He loved Marvel and DC, so we loved Marvel and DC, but as I grew older and goth-ier, I began to find out about darker, weirder comics. I loved Sandman for its dense mythological plot. I loved Sam & Max: Freelance Police for the wild breaking of the fourth wall. I loved manga—basically all of it.

I found Meat Cake at Quimby’s in Chicago as a teenager and immediately fell in love. 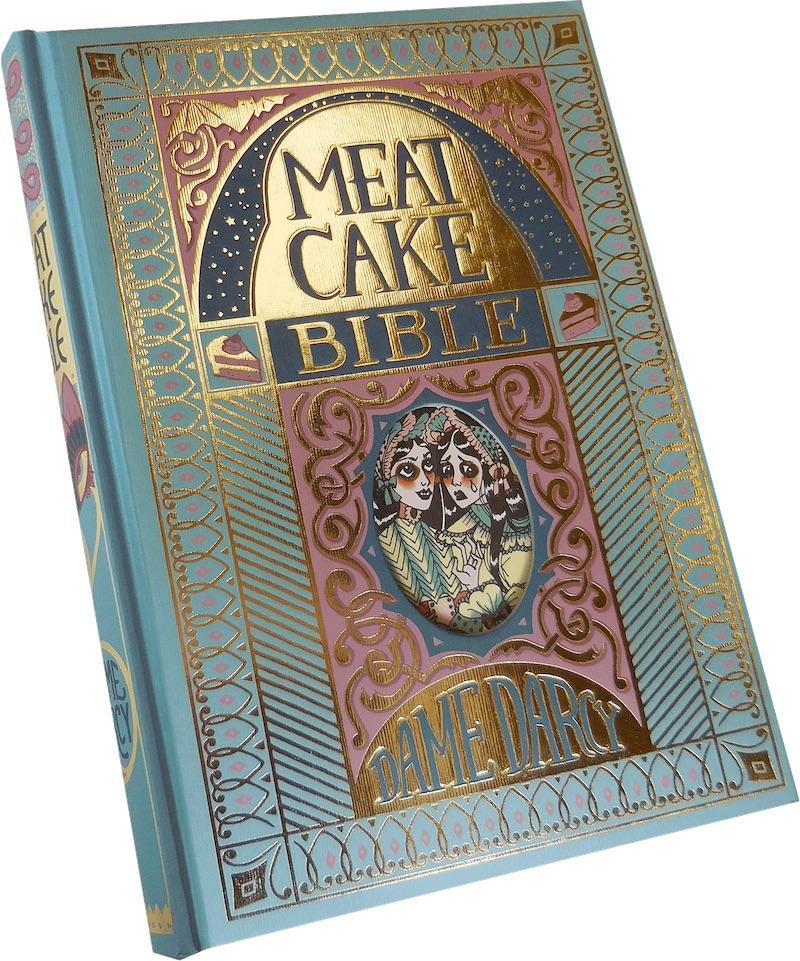 Meat Cake was so different from the mainstream comics I was used to. Every page was filled to the corners with finely illustrated supernatural jokesters living it up and stickin’ it to the man. By comparison, the X-Men looked downright obedient (military even) and Sandman was definitely depressed. Dame Darcy’s stories were about women, and sometimes they were about orphan twin women with supernatural abilities! The central cast was a band of cool, unforgiving artist types just looking for some action. Strega Pez (everyone’s favorite) spoke via candy tablets that stuck out of her neck, mermaid Effluvia used a wheelchair on land, and when Wax Wolf sexually harassed Richard Dirt (the character Dame Darcy based on herself), she murdered him! He was always better by the next issue. These were cartoons, after all.

Darcy grew up on a horse ranch in Idaho. They had no running water, but there was ample space for her active imagination. “I used to think that Little House on the Prairie was happening right then—that they were just up the road and didn’t have a truck,” she says. “My mom was hand-sewing our own bonnets, growing our own food. So I drew and learned to play the banjo. From the time I was 13 until I graduated high school, I was doing hard time. I was pumping iron. I was working on my portfolio. I knew I needed a scholarship to get out of there.” 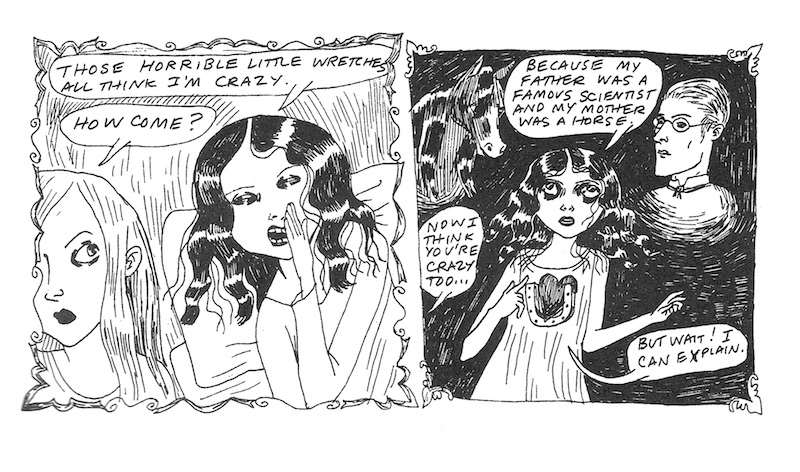 This aspect of Darcy’s youth likely contributed to the sheer value found in Meat Cake, especially when it was in comic book issue form. There’s creativity, to be sure, but also an undeniable economy. Unlike Marvel comics which, in the ‘90s, predominantly consisted of 10 pages of Psylocke’s thighs and 10 pages of slightly more interesting advertisements, Meat Cake promised three or four whole stories every issue. A single comic could last me an entire day of pouring over all the tightly lettered asides. It made the Meat Cake comics precious relics, and it makes the Meat Cake Bible a little intimidating to the uninitiated. You pull it open, and there is so much energy shooting out. This is 15 years of a creative dynamo’s regular output captured. Like anything very bright, you have to let your eyes get used to it. 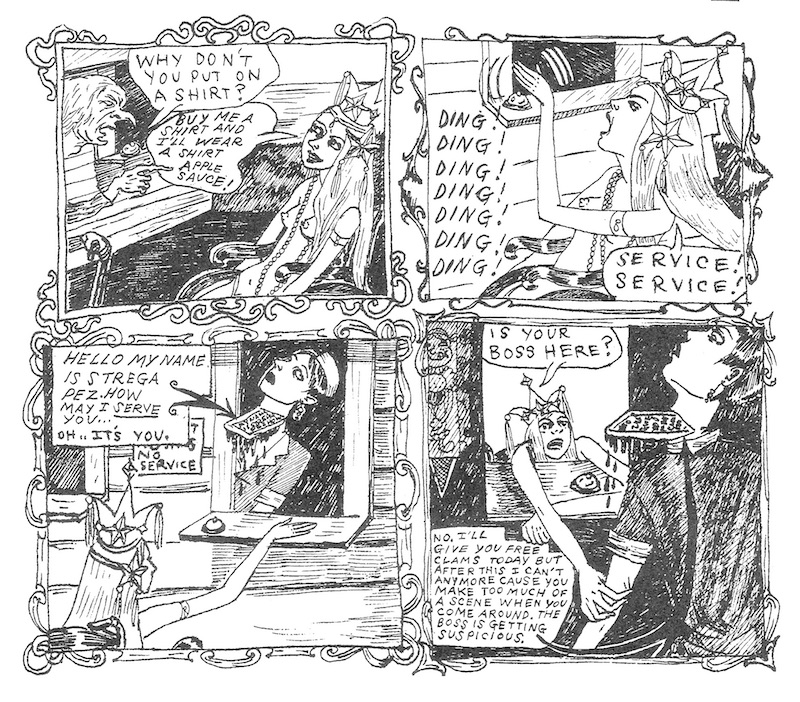 Also unheard of for indie comics—at the time and even now—Meat Cake came out on a semi-regular basis. Darcy produced comics at a gallop, and when Fantagraphics finally picked her up, she kept cooking up books. “When I lived in San Francisco, I was producing my own books,” Darcy says. “I was distributing my own zines and sending my comics to publishers. I would set deadlines for myself. I’d do it every six months so I’d show them I could produce comics as if I was under deadline. Then I just kept doing that. I kept making my deadlines.” 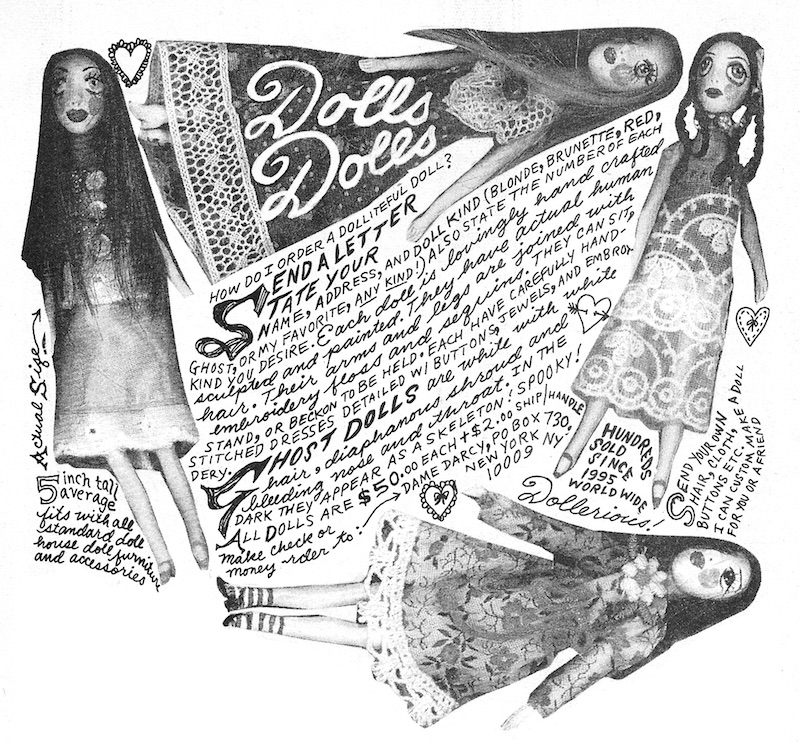 Dame Darcy’s hand-drawn advertisements from Meat Cake sadly were not carried over to the Meat Cake Bible. These ads peddled the merchandise and services she offered while Meat Cake was active: dolls, palm readings, tarot readings, music tours, cassette tapes of her music, pin-up photos of her dressed like a mermaid. She was making her sparse comics income work for her. She was pumping her brand. Darcy still offers palm readings on her Etsy page. “My mermaid tarot deck is actually the thing that makes me the most money these days,” she laughs. “That shit went viral. We’re developing an app for it!”

Throughout our interview, Darcy expressed hope that the barriers that kept her from being as successful as she had the potential to be in the ‘90s are beginning to give way. “I think Gen X-ers and LGBT people are starting to infiltrate decision-making positions, and they’re responsible for green-lighting things like Penny Dreadful and Orange Is the New Black, which have been such big successes!” It does seem like her turn is more than overdue. 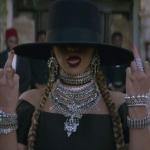 by Emma Rault
Artists from Beyoncé to Grimes embrace imagery and aesthetics of witchcraft in recent videos.