A Collection of Emails from Irate Men Defending Manspreading 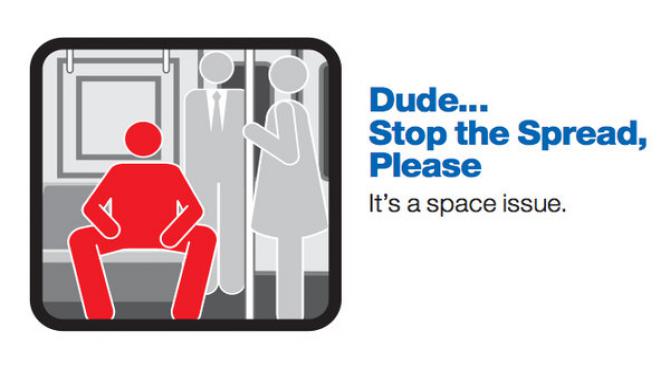 We all know about manspreading. Blogs like the aptly named “Men Taking Up Too Much Space on the Train” have helped recognize the widespread phenomena of men unconsciously taking up more space than women in public places like subways, buses, and movie theaters. The internet is full of the manspreading think pieces and manspreading memes (including my favorite: “Saving Room for Cats”).

But while manspreading is a well-known issue on public transit, there are very few public transit agencies talking about it. In December, New York City’s Metropolitan Transportation Authority took the plunge and included manspreading in their “Courtesy Counts” campaign. Among a dozen messages targeting public transit do’s and don’ts installed on subway cars, one placard read, “Dude… Stop the Spread, Please.”  The anti-manspreading sign sparked a big hubub, including this interview the New York Times did with Johnny T, a native New Yorker and puppet:

All the media coverage got me interested in what subway riders themslves were saying about manspreading. So few weeks after the MTA’s efforts made headlines, I filed a public records request through MuckRock.com for MTA emails containing the word “manspreading.” The transit agency sent me a file of 18 email comments about the campaign from over the course of one month.

Of the 18 emails, nine of them called out the campaign for being sexist against men, anti-male, or contained gripes about how they ways women take up space are a far worse problem. The complaints range from the predictable to the offensive to the downright perplexing.A couple of them contained weird racial microaggressions (“Would the MTA also have a campaign ‘hey black folks, stop using the poles to do your dance routines?’ That would be racist by most counts, correct?” You’re correct. It would.) But from the worst of the worst we get a glimpse into the pushback a public agency gets when it dares to address issues around gender.

Many of the complaints tell the MTA that asking dudes to “stop the spread” is “blatant sexism.” Like this charming email that says the PSA amounts to publicly funded man-bashing: 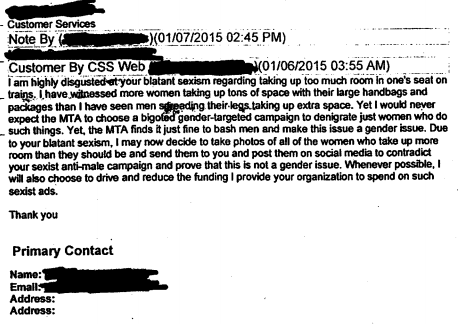 It’s interesting—but not at all surprising—that a request for men to think about whether they’re taking up inordinate amounts of space on the subway was met with a wave of antagonism from guys who cry “misandry!”

Women are no stranger to having our behavior policed. Sometimes it can seem like “sorry” is built into the beginning of any comment we have, as if we have to feel regret for thinking anything at all. In public space, that apology is translated into shrunken bodies, with legs crossed and hands folded in our laps. We constantly feel the pressure to make ourselves smaller (whatever that means). Men are encouraged to take up more space, physically and conversationally. So when even the most innocuous PSA asks them to address their spatial privilege, the response is to excuse their behavior by trying to erase gender from their offense and by pointing out ways that women have made similar offenses.

Here’s a typical email that dismisses the PSA as a “sexist attack on men” and argues that the real problem is fat people and women with large breasts. Nice, dude. 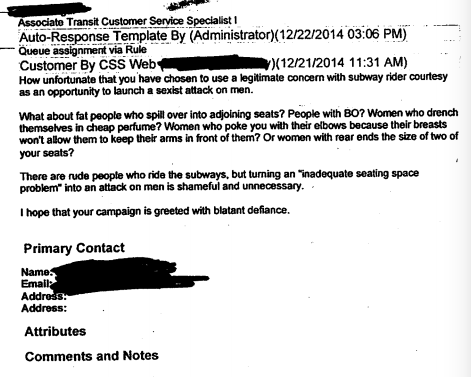 A number of the complaints charge the MTA to address other types of space-taking behavior… which the MTA did. The eleven other Courtesy Counts placards address non-manspreading issues, including people being “pole hogs,” taking up space with backpacks, blocking doors, and how it’s polite to offer your seat to an elderly, disabled, or pregnant person. In fact the image for the Courtesy Counts rendition of how to “keep your stuff to yourself” is gendered as a woman and while we certainly could argue that this is also a little bit sexist (what with all the shopping bags and what not), I think we can all agree to let this non-issue go.

Buuuut this irritated New Yorker wants to know why “purse seating” isn’t also a problem. Yes, it is interesting to consider why men consistently take up more space, as documented by numerous blogs and videos, isn’t it?

Manspreading is a gendered term for a gendered act. And just like the rest of the Courtesy Counts campaign, it addresses an issue of thoughtlessness on public transportation. As Ana Karsparian pointed out earlier this year, manspreading doesn’t have to be the main stage for our conversation about gender oppression. But the way gender colors our relationship to public space matters. Manspreading is pretty harmless compared to some of the other behaviors men exhibit in public spaces and on public transit. It’s male entitlement in its least threatening form.

Not all of the complaints about the manspreading were so senseless. One person pointed out that there are circumstances when a man needs to sit with his legs open. Unlike the countless tweets comments about the limitations set by their genitalia, this person sites the serious, although likely uncommon, instances of medical procedures that would make closing his legs uncomfortable and even painful. He actually raises another question about the politics of manspreading: Where do we figure the ethics of public shaming in all this? The inclusion of manspreading in the MTA’s campaign was very likely due to a cultural climate surrounding a blog that takes and posts pictures of strangers without their consent. What do we do with that? 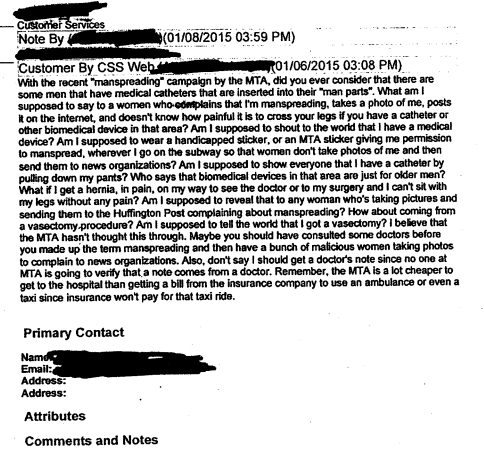 To their credit, the MTA stood by the campaign. In the MTA’s form-letter response, they remind the bellyachers that the aim of the posters, anti-manspreading and otherwise, were merely an attempt to make riding the subway better for all.

It’s difficult to pack the nuances of gender politics into a subway PSA. It’s difficult to have any kind of conversation that even remotely relates to gender without feeling the whiplash. MTA set out to try and help remind people to be a little more courteous on the subway. This is what they got instead:

Related Reading: Every Street Should Be a Safe Space.

Emily Hopkins is a Boston-based journalist who writes about housing, transparency, and social justice activism. Follow them on Twitter.

As the article says: men are encouraged to take up both physical and conversational space and women are encourage to make themselves small. It takes open eyes to see the privileges you take for granted.

Freud was wrong; it was never penis envy. It was *always* privilege envy.

I'm glad that transportation agencies are trying to do something about this. I hate manspreading. I especially hate it because I tend to move away from a guy's legs because I feel uncomfortable with my leg right up next to that of an unfamiliar guy. Every time I move, the guy who's sitting next to me inevitably moves to take up the empty space. Eventually I end up squashed against the wall or a partition with only about half the seat and nowhere else to go and still the guy has his leg against mine. Most uncomfortable, in more ways than one. I wouldn't mind sitting next to a guy so much if he would just leave me some room between me and him and let me have my whole seat.

literally every one of the "but what about this other worse problem" examples these men give are addressed in the ad campaign. they just want to complain about how attacked they feel. barf.

Manspreading is a legitimate concern. So sure, let's de-genderize it. Women shouldn't manspread either and nor should men seat their baggage either. Move on everyone.

Actually yes.
Because it's equally frustrating getting on a train, bus etc and having nowhere to sit because someone's put their purse on the chair.

Do you not ask them to move their bag so you can sit down? I (woman) would ask 100% of the time rather than cede my seat to a purse. Maybe it's a naive Southern thing to expect that people will respond pretty nicely to a direct request, but that is my experience. I would be more wary of asking a man to shut his legs, though.

I've always lived in places where you have to drive because there's no public transit, so I didn't grow up taking trains/buses/subways, but from my perspective, the spreading or purse-seating is only really a problem if the vehicle is crowded. I wouldn't really mind someone having a bag in their seat as long as they move it when someone needs the seat.

Could you not ask a man to close his legs just as easily? That's that point that confuses me in all of this. If it's expected that people ask someone to move their belongings so that someone might sit down, it's just as reasonable to ask someone to reposition themselves.

Wanna know why I purse spread? TO ENSURE A MAN CAN'T SIT NEXT TO ME AND MANSPREAD.

Do you not agree that this just exacerbates the fundamental problem of people taking up more space than necessary and forcing other passengers to ask them to move (their stuff, or their leg, whatever)?

YES. Women purse-seat because we do not feel safe in public spaces. If men stopped treating public spaces like their own personal lounge club, I guarantee there would be less purses on seats.

Feminism is about the equality of genders. Right? So let's turn this on its head. What if this was a PA that specifically targeted women? For example,

"Lady, keep it down, please," alongside a figure in a dress speaking loudly into her cellphone.

But singling out women and making it a woman-only issue is sexist. Just like singling men out for "spreading" and making it a men's-only issue is sexist. Being insensitive to men's rights doesn't make you a better feminist, it makes you a jerk. It's no different then a man laughing at a woman and saying, "Oh, aren't you cute," when she says she's oppressed. These guys had legitimate complaints. In fact, they sound quite a bit like feminist and trans rights letters, just with a different subject.

You want men to stand beside you and build gender equality? Try not denying them the exact consideration you are demanding.

Really disappointed in the way Emily Hopkins handled this issue.

I remember when I was much younger that I wasn't aware of my own "manspreading" problem when I would sit somewhere, until I noticed another guy like me and said to myself, hey, that doesn't look right. I just wasn't self-aware of what my body was doing as I was in my own thoughts. I could have used a friendly warning sign like that and would have appreciated it, so, sorry about that ladies. I think it really is a guy thing, and I can't believe these guys retaliating. Heck, a revelation to not display my crotch made me seem less the animal, I reckon.

I think that while people shouldn't take up so much space on subways, we really shouldn't call it "manspreading" because both sexes do it. I am a girl, and I "manspread" all the time.