The Killers Within: Home Invasion Movies and Violence Behind Closed Doors 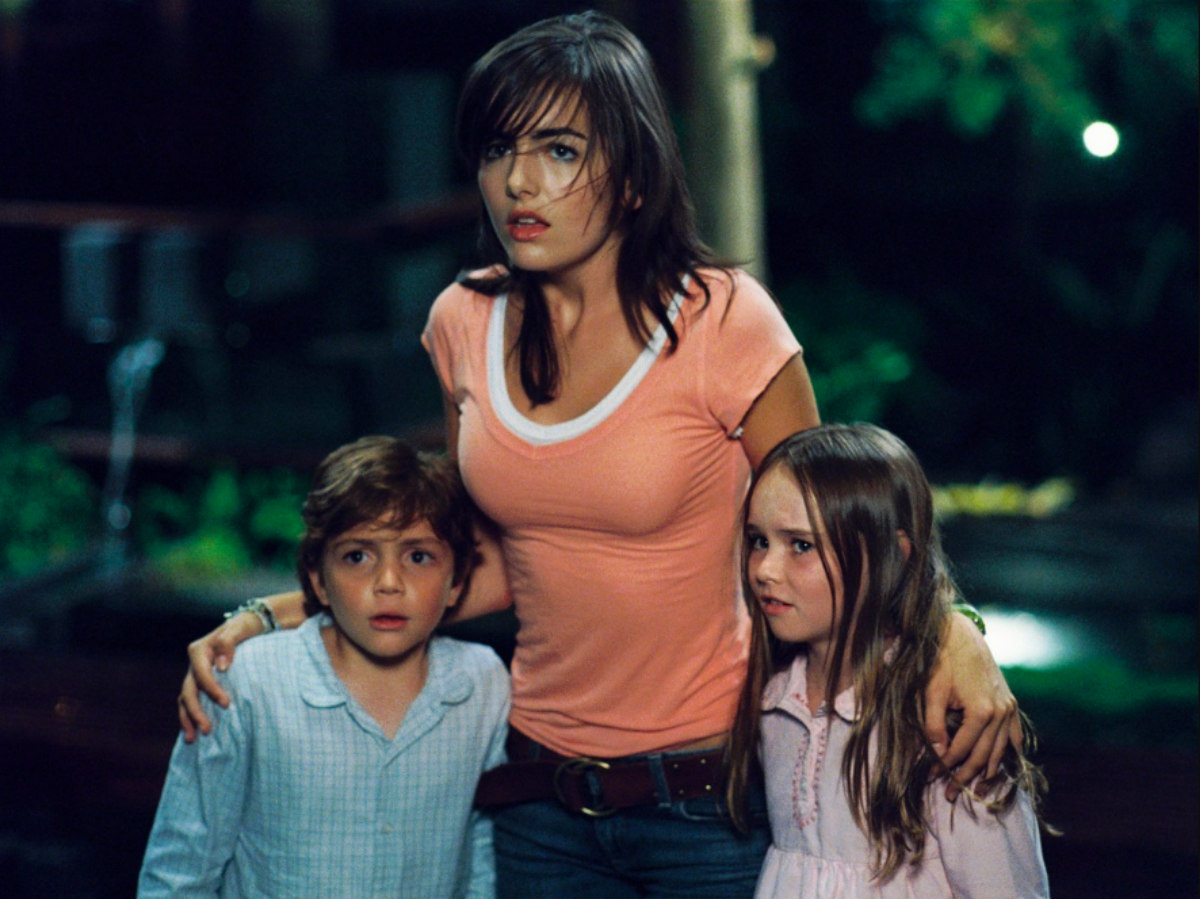 In the 1967 movie Wait Until Dark, a sadistic criminal, played by Alan Arkin, traps housewife Susy (Audrey Hepburn) in her New York apartment, forcing her to fight him to the death. Watching the film recently, my mind toggled back and forth between critiquing its ludicrous plot and surrendering to the terror it depicts. What lends such an absurd movie such real power over my mind? Home invasion movies like Wait Until Dark, Panic Room, Funny Games, In Their Skin, and When a Stranger Calls often feature women in peril, but offer no shining knights to rescue them. Instead the women are trapped with their perpetrators, forced to fight back or die. They are movies, I think, about a kind of sadism and sociopathy that fuels sexual and domestic violence in our actual homes, but which we have no language to address directly.

The dark, dangerous side of masculinity in these stories is instead embodied by the invading criminals, while kind and generous men are portrayed as rather useless. In Wait Until Dark and in more recent film Panic Room, men are compartmentalized. Audrey Hepburn’s character has a kind, somewhat codependent husband, who’s inadvertently mixed up in the story’s convoluted plot, but who’s absent during the terrors that occur. In Panic Room, likewise, Jodie Foster’s character is a recent divorcee, whose wealthy ex-husband purchases the apartment that’s broken into as she and her daughter spend their first night there. He shows up later, in ineffectual fashion, but has nothing to do with the menacing violence that transpires. Among these films’ villains, the sadism is confined to one lone madman. In Wait Until Dark, three men invade Hepburn’s apartment: the thuggish Carlino, who’s killed off early; Mike Talman, an ex-GI who’s turned to crime, but who retains a conscience; and the sociopath Roat, played by Arkin. Of the three, only Talman emerges as a whole person, capable of making a connection with Hepburn. Roat, by contrast, is almost a specter, a character whose actions and words make no logical sense, but instead seem to anthropomorphize sociopathic aggression.

This pattern is repeated almost exactly in Panic Room. Jared Leto’s character is a sniveling drug addict, who’s organized a robbery to seize the lost fortune of his recently deceased grandfather. Forest Whitaker, one of the robbers, has a conscience. Like Foster, he’s a parent, and at every turn he considers Foster’s well-being, as well as that of her daughter, a young Kristin Stewart. Dwight Yoakam, conversely, as Raoul, is sinister, blood-thirsty, and seemingly more concerned with inflicting pain and spreading terror than with the task his group has gathered to accomplish. Evil in these movies is consigned to figures like Roat and Raoul. The other characters, one senses, could be satisfied or reasoned with, but no such rapprochement can be reached with madmen like these two. Home invasion stories like these establish a richness in their heroine’s lives—a domestic bliss for Hepburn, wealth and high tech security for Foster—and then insert these sadistic criminals, to illustrate that no woman’s life, no matter how stable and pristine, is free from this danger.

Funny Games, by filmmaker Michael Hanneke, is a sort of heightened, meta take on this concept. The American version features Naomi Watts and Tim Roth as a wealthy, cultured couple whose weekend getaway at a lakehouse is horrifically interrupted by two young, psychotic invaders, Peter and Paul, who hold them captive in the home. Hanneke investigates an unnerving aspect of sadism by having his invaders speak with a heightened politeness, take exception to every perceived slight shown by their hosts, and display an immature preoccupation with games and rules. Like Raoul and Roat, the two reflexively blame their captives for every misfortune they visit upon them. Hanneke’s film ultimately becomes about his relationship with, and indictment of, the viewer, which is disappointing. Paul consistently breaks the fourth wall, in attempts to make the viewer complicit with his actions, and by the end the film ceases to be about Watts and her family at all, robbing the home invasion film, in my opinion, of its raison d’etre.

Authors Richard Gelles, Murray Strauss, and Suzanne Steinmetz open their book Behind Closed Doors: Violence in the American Family, a study of statistics regarding sexual and domestic violence in American homes, by stating, “With the exception of the police and the military, the family is perhaps the most violent social group, and the home the most violent social setting in our society.” Our culture has shown very little facility with addressing the type of violence Gelles and Strauss document, however. Perhaps as a result, we create entertainment that depicts a wildly violent world, in which homes are peaceful oases, rather than the more statistically accurate opposite. We deny and repress the idea that partners ritually abuse one another, or that children are trapped with violent or incestuous parents. Such scenarios, while prevalent in our society, constitute an infinitesimal amount of our narratives.

How do we process these wounds and betrayals, then? To my mind it’s through stories like these. Storytellers distance the abuse, from the spouse to the anonymous criminal. Following that, they distance it further, quarantining the irrational cruelty present during abuse and violation within the stories’ irredeemable villains. Home invasion movies offer a chance to see women and children confront violence within their homes. They must fight back, against homicidal adversaries. Viewers, who may have experienced unsafe living situations, can see them depicted, can watch actresses confront life or death moments in perhaps the only stories, which offer such scenarios.

Shortly after watching Wait Until Dark, I saw the TMZ elevator video of Ray Rice punching his then-fiancee. I, like most viewers, was shocked. This was the violence Behind Closed Doors is talking about, and which we rarely, if ever, witness. Could a two-hour film be told about a relationship containing that moment? Do we have the capacity in our cultural imagination for a husband or father who commits such an act? If not, what does it say about our collective imagination, when our culture itself, is brimming with people who commit such acts? In writing about Law & Order: SVU, New Yorker critic Emily Nussbaum argues that the show offers the fantasy of a “controllable” world.

“As in a dream, SVU takes the grisly stories that dominate the news—Steubenville, Delhi, the U.S. military, the torture house in Cleveland—and reorganizes them, reducing the raw data to a format that viewers can handle… For young women, who are endlessly bombarded with warnings of how to avoid assault, watching can feel like a perverse training manual.”

Home invasion movies operate similarly. The terror only occurs when one’s partner is away. The women try to reason, but, when all else fails, they fight back, and, in most cases, win. It’s a parallel world, where one can vanquish an embodiment of evil, which bears no relation to the day-to-day life they inhabit. In our society, the taboo against discussing topics such as spousal rape and incest, horrific crimes that take place almost exclusively within family homes, remains hard to break.  No one would admit to committing such a crime, lest they become a pariah and go to prison. Few people discuss surviving them, due to the shame they carry, and the shattering effect such assertions would have on the family unit. The sorts of aggression, lust and dehumanizing anger inherent in such crimes, has no place in our conceptions of normal human behavior, even if they’re present within those who commit such crimes.

They’re part of our shadow, and materialize in villains, such as Roat, Raoul, Peter and Paul, robbers more interested in victimizing those around them than profiting from their plans. It’s true that home invasion-style crimes, robberies in which residents present are assaulted by intruders, do happen, and it’s possible films like Panic Room and Wait Until Dark are merely inspired by spinning out “What if?” scenarios based on those ideas. The details within them, however, suggest that the villains seek out people in their homes because they want to rattle people in a place where they feel safe, where security is unattainable despite the women’s best efforts and appearances.

Funny Games ends with the suggestion that Peter and Paul’s rampage will continue indefinitely, as they go from house to house, exterminating families. More traditional home invasion films end in tentative happiness, with evil vanquished, and serenity slowly returning. A happier development for our culture might begin with more transparency about our homes, and the admission that cruelty need not always break in there, because it’s name is already on the lease. When we can face that, we may no longer need bogeymen like Roat and Raoul to bear the burden of humanity’s dark side for us.

Having witnessed the effects of verbal domestic abuse on someone I care about, this post really hits home. The thing that has driven me crazy is that there hasn't been a happy ending for her. She got away from him, and things have definitely gotten better, but she's still struggling years later, and he has never admitted to any wrongdoing, though he's had witnesses to the deed. I can see how the catharsis of these movies could do a lot to help someone deal with that kind of injustice.

This is really insightful. I don't love scary movies but it's been difficult for me to pinpoint exactly what I can't handle. Abuse has always been very difficult for me to watch (even when it serves a good, informative purpose in a meaningful drama) but this is sort of making me realize that home invasion is something that really terrifies me in film because it challenges some tenuous notion of security I have in my own home and life. Many of my male friends don't seem to experience the same fears. Great food for thought. I'll stick to Cabin in the Woods and the Nightmate Before Christmas this halloween!