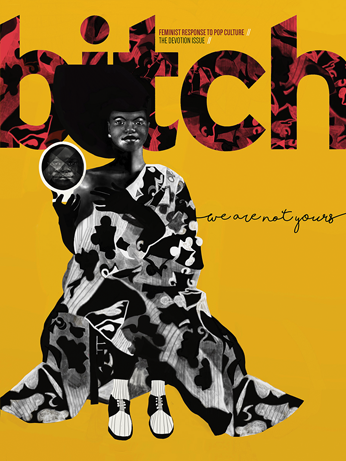 What are the unspoken things you are devoted to and, more importantly, what do they reveal? In this issue, we reach under the top soil and grab at the roots of our cultural beliefs. Devotion isn’t just about loyalty; it’s an examination of habit—a mixture of internalized superiorities and inferiorities, ideologies, and obsessions that influence our identity and choices as media consumers and pop cultural enthusiasts. It’s worth it to take time to think through what and who deserve our devotion—including our own selves.

CAN YOU SEE ME NOW?: The fragility of maternal transition. | Vanessa Mártir

UNDIVIDED STATE: A conversation on feminism and spirituality. | Hosted by Lisa Factora-Borchers

WE ARE NOT YOURS: Black women are supreme but not superhuman. | Jordan McDonald

I LEARNED IT ON YOUTUBE: What online beauty gurus can—and can’t—teach us about sex. | Vanessa Borjon

FROM THE GOLDEN AGE: How Hollywood closeted queerness for capital. | Samantha Ladwig

FROM TEXAS: Remodeling the quinceañera for immigration reform. | Emilly Prado

From Here to Eternity: Traveling the World to Find the Good Death (Caitlin Doughty) by Sonya Vatomsky
The Extra Woman: How Marjorie Hillis Led a Generation of Women to Live Alone and Like It (Joana Scutts) by Joshunda Sanders
Where the Past Begins: A Writer’s Memoir (Amy Tan) by Ilana Masad
The Promise of Patriarchy: Women and the Nation of Islam (Ula Yvette Taylor) by Najma Sharif
The Floating World (C. Morgan Babst) by Dara Mathis

Bitch magazine is made possible by our members and subscribers.