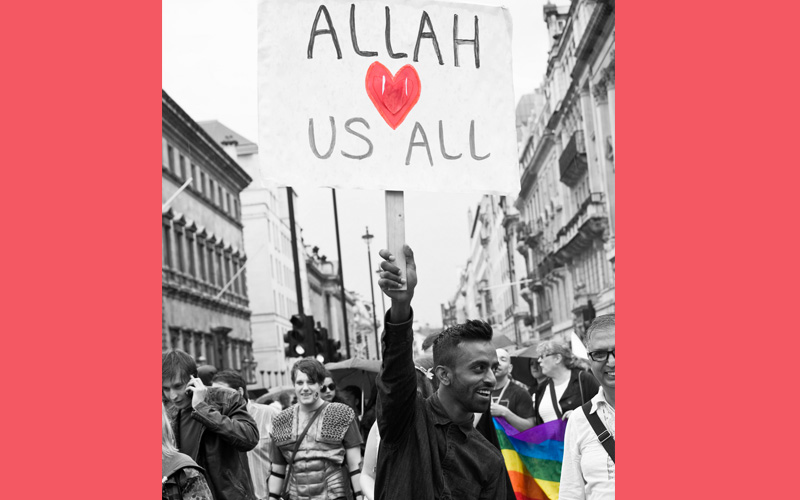 This story was originally published on March 17, 2016.

When Deellan Kashani goes for a night out in San Francisco, she often gets picked up by white men aiming to sleep with her—after they find out she’s Muslim. The most outrageous pick up line she ever heard? “Wait, you’re Muslim? So when you orgasm do you say ‘Oh God!’ Or “Allahu Akbar!?” Feeling like a novelty ice cream flavor is something she, sadly, has gotten used to the past few years. The 22-year-old often jokes about how even in Berkeley (she refers to it as “the hub of self-righteous liberals”) she feels quite literally like the special edition Beanie Baby. The feeling of being fetishized at social functions is unfortunately still a common reality. In addition to being Muslim and multi-racial, she’s also queer. That’s what really shocks people, she says.

LGBTQ Muslims often are met with degrading experiences and hostility from Muslims, non-Muslims, straight people, and LGBTQ people alike. Queer Muslims have the difficult job of figuring out how to advocate for themselves and their communities in a society that wants to see Islam as regressive in order to justify our incursions in the Middle East. This past February, Kashani attended the California Democratic Convention in San Jose where she was slated to become the chair of the Muslim Caucus for the Young Democrats. As the outgoing chair introduced her, he took the opportunity to highlight her queerness when citing his endorsement as an attempt to “stick it to the stuck-up older Muslims” at the convention. For Kashani, it was insulting. Her queerness along with her “Muslimness” was tokenized to be used as a prop to further an agenda she didn’t even consent to be a part of in the first place.

While her non-Muslim friends try to be supportive, their reactions often strike Kashani as off-putting. “They [non-Muslims] will try and frame my experience in terms of their own preconceived notions of what it is to be queer and Muslim and Middle-Eastern when they question me,” explained Kashani. “They’d ask me questions like ‘Oh my God, how does your family feel about you being queer?” as if my parents aren’t fine with it.”

When Kashani would respond that her parents are pretty left on the political spectrum, and how they were actually thrilled when she came out to them, she noticed a subtle but consistent current of Islamophobia was revealed in non-Muslims’ reactions. Frequently this Islamophobia manifested in the persistent belief that the Islamic State is an accurate representation of all Muslims. “There’s usually a defense of how they, of course, don’t think all Muslims are homophobic, but will follow it up with ‘But like, when you see things like ISIS, it makes you wonder,’” Kashani added.

This type of reaction from her non-Muslims peers is a result of how the media often paints Arab and Muslim societies as similar to the Islamic State: as extreme barbaric breeding grounds of anti-gay persecution. But contrary to public opinion, not every non-queer Muslim throws gays off the highest building of the city. 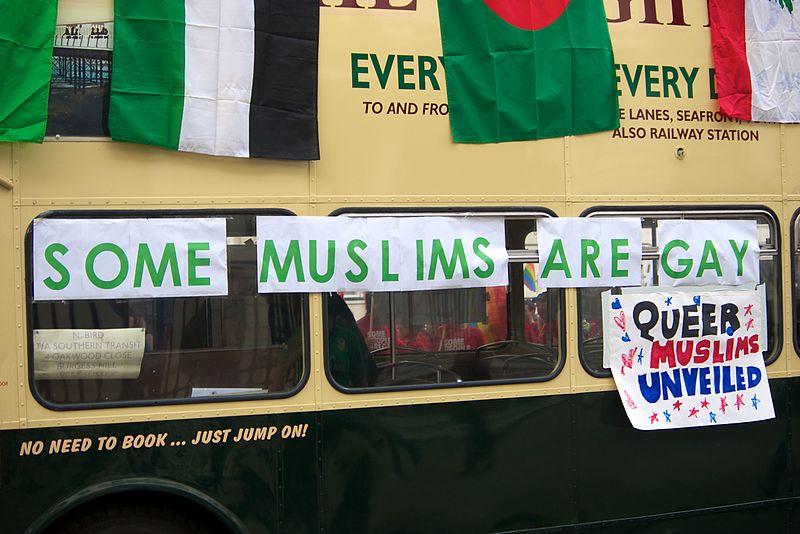 Eli, a 23-year-old sex educator in DC is used to a shocked reaction from non-Muslims at this point. They identify as genderqueer and asked that I not use their last name in this story, since they’re not out to all their friends and family. If Eli has time to spare, they try to educate people about the diversity of Muslim identities. If they don’t feel like giving the same speech once again, they’ll ignore the comments. However, what they find the most hurtful is when members of the LGBTQ Muslim community would parrot anti-Islam rhetoric.

“When queer Muslims, even though they still identify with the term, espouse hateful speech of certain countries or aspects of Islam, and not in a ‘let’s commiserate together and work on a solution’ type of way, but in an ‘I’m ashamed to be Muslim, even these non-Muslims know what’s up’ kind of way, it’s hurtful,” Eli said. “It’s hurtful to the community, to the movement, and it’s disheartening.” At the same time, queer Muslims who speak out against homophobia within their own community can wind up being co-opted as poster children by non-Muslims who like to see Muslims criticizing Islam. Eli mentioned how their father—a sheikh—once told them about the barriers to succeeding in academia as a Muslim. “My dad once told me that to be a successful Muslim in academia, you have to hate Islam,”  Eli said. “When you write your analyses, your articles, your papers, your novels, your books, they want you to criticize and hate Islam, pick it apart and tell people how out of date it is. I think that’s very true nowadays.”

This reality extends beyond academia. Try this exercise: think of a Muslim community member of the LGBTQ community who has appeared on mainstream media networks defending the Muslim community. It’s a little hard, isn’t it? 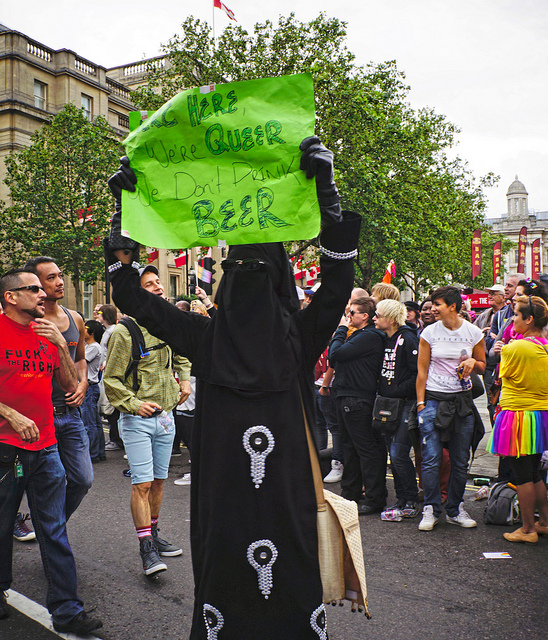 Some Muslim LGBT activists feel burned by a May 2013 The Washington Post article about an annual retreat for Muslim LGBTQ people.  One of the Muslims featured in the story, Kaamila Mohamed, says the piece portrayed the greater Muslim community as “backwards” or hostile towards them. While it’s true that many LGBTQ Muslims do face backlash from their families and religious community, this narrative is not the only representation of what life is like for them.

Mohamed says the article completely misrepresented and dismissed her concerns as a bisexual queer Muslim woman. In a response, she mentioned how the reporter put aside the Islamophobia the community  has met within the mainstream LGBTQ network (mentioning it only in parentheses). However, what was most frustrating to Mohamed was that  the story misleadingly wrote that she was exiled by the Somali community—something she said wasn’t the case.

“The piece also states that when I came out to my family, I ‘felt pushed away by the Somali community.’ Astoundingly, I asked the reporter to say that I was rejected by some Somalis—not all of them,” wrote Mohammed in her response piece, which is titled, “LGBTQ Muslims: A Diverse, Dynamic and Confident Community.”

“I have not had a blanket experience of homophobia from Somalis (or Muslims, for that matter). I conveyed to her that these are complex and nuanced experiences — ones not easily summed up by a reporter on a deadline with a tight word limit. The multiplicity of reactions from straight Muslims—including outspoken LGBTQ allies and supportive Muslim families—is not captured in the article.”

With all that being said, the portrayal of Muslim LGBTQ members in the Washington Post was yet another example of these individuals being cast as “novelty items.” For the non-Muslim reporter at the Washington Post, it was “surprising” to see an annual retreat for Muslims in the LGBTQ community, and perhaps that surprise came from latent Orientalist and subtle anti-Islam beliefs. Why is the existence of LGBTQ individuals any more surprising in Muslim communities than in other religious communities?  There are gay Christians, Catholics, Jews, and Mormons. It’s worth considering whether the outsize reaction to the reality that Muslims can be queer, too,  is rooted in Islamophobic notions that all Muslim communities are backwards and intolerant.

Hallima Docmanov is another Black-Somali American who has felt discomfort within the mainstream LGBTQ movement. Being a trans non-binary queer Muslim who once wore a hijab, she feels pressure from the mainstream LGBTQ community to look a certain way. “One of the realities of coming out queer and Muslim is that within the Western LGBTQ community, I had always felt discomfort by the way they exhibit their Western image of queerness,” Hallima said. “When I wore the hijab to larger LGBTQIA events such as PRIDE, people would often times look at me funny. I remember tabling for my queer Muslim community in Boston and an old woman came up to ask how I could be both queer and Muslim.”

In their haste to cast all Muslim communities as homophobic, many Western journalists and LGBTQ activists conveniently forget how North Africa, was once a gay haven for writers and creatives fleeing anti-gay persecution in the 1950s American writers such as William Burroughs, Jack Kerouac and Allen Ginsberg traveled to Morocco  to work on literature that would later be banned by the U.S. for “obscenity.” It is worth noting that the rise of homophobia and state persecution against gays in the Middle East coincides with the Western occupation of these countries.

LGBTQ Muslims can be exploited for western imperial agendas and anti-Islam narratives. Pundits Bill Maher and Ayaan Hirsi Ali are perhaps the most notorious for their usage of citing LGBTQ rights within Muslim societies as justification for their bigotry and Hirsi Ali’s push for oppressive reforms. Pinkwashing, the act of promoting damaging concepts or agendas through LGBTQ-positive appeals and politics, is everywhere. One example of this kind of pinkwashing is a full-page ad that pro-Israel group Stand With Us and celebrity Zionist Rabbi Schmuley ran in The New York Times in December 2014. Underneath a headshot of a white gay American man named Rennick Remley, the ad read: “Hamas, ISIS and Iran Kills Gays Like Me.”  This inflammatory headline was followed by a relentlessly pro-occupation statement by Remley in which he proclaimed his continuing support for Israel as a gay American—despite their human rights violations towards African asylum seekers and Palestinians.

Activists point out how common it is for lobbying organizations and policymakers to use pinkwashing to frame interventions into majority Muslim countries as humanitarian efforts rather than imperialist ventures. We’ve seen this with the Human Rights Campaign, who has been outed as the largest LGBTQ donor to drone manufacturers, using gay rights abroad as justification for their support of the killings of many innocent civilians.

Saleem Haddad is an aid worker and writer based out of London who has been challenging the tokenizing of LGBTQ members and the pinkwashing. His newly released novel Guapa features the story of a gay man coming out in the Middle East, and shatters the stereotypes of what life is like as a gay man in Arab countries. “In the Arab world, those of us on the margins often face a dual struggle: we are battling oppressive forces within our own communities, and we are also resisting the global narrative that tries to use our “oppression” for broader military or political goals,” Haddad said.

Haddad tells me that the great challenge LGBTQ Muslims face is finding how their isolated and marginalized voices can be heard without having to align themselves with Western imperialist narratives. At the same time, finding a way for Muslim LGBTQ activists simultaneously challenging the patriarchal structures in Arab societies. For Haddad, that’s a tough spot to be put on as an Arab man. He refers me to something he said in  interview with global analysis magazine Muftah:

“As an Arab man, how can I celebrate legislative changes in the United States that allow gay men and women to serve in the military, when this same institution is responsible for things like the Abu Ghraib prison torture, the wars in Afghanistan and Iraq, and the continued drone strikes?”

But Haddad believes there are reasons to be optimistic. The radical left and queer Arab movements have been working tirelessly to make a mark in the mainstream LGBTQ network. Groups like Qaws—a queer Palestinian movement—has made a name for themselves to challenge the pinkwashing of Israel’s human rights violations and occupation of Palestine in efforts to build “positive bridges of solidarity between movements in the West and East.”

Sarah Harvard is a journalist based in Washington, D.C focusing on national security, civil liberties, and Islam. 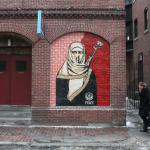